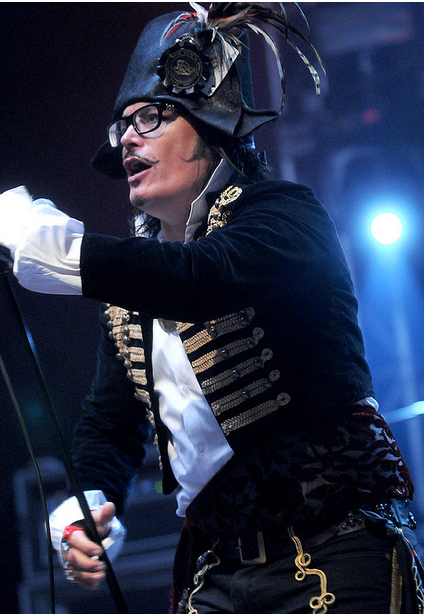 Best Buy Theater, October 6, 2012
By Madeline Bocaro
Adam & The Ants were the last breath of fresh air just before Punk became mainstream, just as the 80s kicked in. The Ants’ schematic was solidarity of the underdog – tribes of little worker ants, gathered as one big whole, following the band and gathering strength from the music. Here we are, all grown up now, but still kids at heart…forever faithful to our hero.

I kept a 20-year long promise to my idol – that I would be front and center if he ever played in New York again. He did, and I was!! Just the fact that Adam is now healthy was good enough, but that he actually made it to the (sold out!) show after an 8-month postponement – and blew us all away, was a dream come true!!

The giant Adam Ant logo banner was floor to ceiling. Chills arose when I saw the two drum kits with bass drums labeled ‘Adam’ and ‘Ant’!!! Then Adam started his 30-song set. YES 30!!!! The crowd wasn’t quite as colorful as in the old days of Ant mania. There were a few streaks of war paint, and a girl who looked like Bride of Dracula. But everyone was really psyched, and sang along to every song.
Adam looked divine in his huge pirate hat and boots, with the finest plumage, buccaneer style jacket (his original, worn by the actor David Hemmings in the 1968 film The Charge of the Light Brigade, is encased in a glass exhibit at the O2 in England). Puss In Boots meets Johnny Depp/Jack Sparrow (the look he stole from Adam to begin with!) A thin moustache and nerdy eyeglasses completed the ensemble. A leather fanny pouch at the back most likely contained his pirate reading glasses – for those old sea scrolls and messages in bottles. Under a white button-down shirt he wore a t-shirt bearing the image of his younger self. He still has all of his suave dance moves going on!
The opener was ‘Plastic Surgery’, which he has not had, or needed. As the two drum sets kicked in, our heartbeats doubled in time. The set included many Kings of the Wild Frontier songs, but it was a thrill to hear so many older songs, as well as the obligatory 80s hits. Adam’s band, The Good, The Mad and The Lovely Posse, was great – one of the drummers, Yola Rodowicz resembled a Beehive Barbie doll, all in white sequins. The guitarist was no Marco Pirroni, but the songs still sounded incredible.
Adam removed his glasses once – for his ‘only love song’, ‘Wonderful’. He introduced ‘Whip In My Valise’ as a precursor to Fifty Shades of Gray (true, Adam is a very sick puppy, and his early material could have been compiled in an album titled Fifty Shades of Ant.)
‘Vince Taylor’ is a great new song from his upcoming double album (Adam Ant is the Blueblack Hussar in Marrying the Gunner’s Daughter – January 2013). For you kids out there, British born Taylor was a popular rock singer in the late 1950s / early 1960s, raised in America. He eventually went insane. Taylor was the inspiration behind David Bowie’s Ziggy Stardust character. His most popular song was ‘Brand New Cadillac’, covered by the Clash.
Adam surprised us with ‘Fat Fun’ in the encore, T. Rex’s ‘Get It On’ and his classic ‘You’re So Physical’ (the faster version!)
Set List:
Plastic Surgery / Dog Eat Dog / Beat My Guest / Kick / Car Trouble / Ants Invasion / Deutscher Girls / Stand And Deliver / Room At The Top / Kings of the Wild Frontier / Wonderful / Whip In My Valise / Vince Taylor / Strip / Desperate But Not Serious / Cleopatra / Never Trust A Man With Egg on his Face / Zerox / Ant Music / Goody Two Shoes / Vive Le Rock / Christian Dior / Lady / Fall In / Prince Charming / Encore: Fat Fun / Get It On / You’re So Physical

One thought on “Adam Ant – Up To His Old ANTics!”