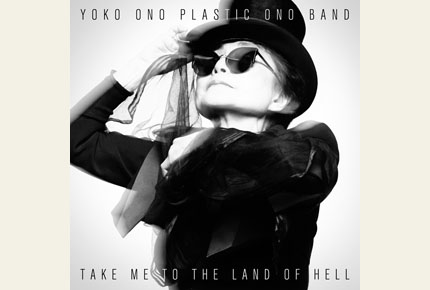 Take Me To the Land of Hell is a pure Yoko fest – including screamers, dreamers and free form rock/jazz/funk excursions to places we’ve never been before. It’s not all peace and love. The dichotomy of life is passionately illustrated with hellish imagery and delicate moments of hope and love. Yoko was spun out of a cyclone that was the first half of her life. After all the turmoil and ugliness, she can still see the world as Oz with all its beauty. She keeps on telling us that if we just believe, all good things will come. Then…there is the dark side. During the recording sessions, Sean proudly proclaimed, “It sounds like the end of the world!” I couldn’t wait to hear it!

Sean re-formed the interchangeable Plastic Ono Band in 2009. POB was first revived for Between My Head and the Sky, reinstating the essence of Yoko’s instinctive primal rock sound. Other collaborators this time include Lenny Kravitz, a couple of Beastie Boys, Cibo Matto, Cornelius and many others. Yoko recently told The Independent, “People tell me this kind of music is young people’s music, and I tell them, ‘I was doing this kind of music before you were born.’”

The album’s opener ‘Moonbeams’ starts with a birdcall. Not the pleasant chirping of a sparrow, but a warning from nature to us all. Imagery of birds and the moon feature prominently in much of Yoko’s work, especially in ‘Moonbeams’. Yoko speaks the opening verses amidst ethereal sounds and the sweet twitter of birds. Our duality of good and evil is examined in this wild dance in a ‘cosmic club’ sound-tracking the changing seasons from winter to spring.

‘Cheshire Cat Cry’ is a warning disguised as a heavy rock jam. Yoko has always had a Cheshire Cat smile, and like the enigmatic creature, she is trying to tell us something. The mythical storybook cat is known to be philosophical, baffling, amusing and mysterious – just like Yoko, but her message is blatant. ‘Stop the violence, stop all wars’. The Declaration of Independenceis reinterpreted to reflect our self-destructive urges. The Cheshire Cat is crying instead of smiling. Featuring Lenny Kravitz on drums and clavinet.

“There were a few points in the song where Yoko was to ‘HOWL’. While most of us only have one way of howling, Yoko apparently has a vast array of howls in her repertoire. She wrote notes next to the HOWL to remind herself which specific Howl to use. The first HOWL had the reminder, ‘Like a dying bird.’ The second HOWL had the notation, ’Like a confused chipmunk.’ The third HOWL, ‘Like a bird on its last breath w/ a chipmunk in its mouth’.”

‘Tabetai’ is a reworking of song of the same name that Yoko performed live in 1974 on her tour of Japan. Meaning ‘I want to eat’, juicy steak, sweet pancakes and fried chicken are all on the menu. It is a playful commentary on famine/gluttony, in an upbeat/offbeat song. When there is no food left (as in her childhood in war-torn Japan) ‘let’s go to another country.’Accented by strange and beautiful beats, and a bottle played like a Japanese flute. A collaboration with tUnE-yArDs.

Who’s bad? She’s bad! Bad means good, get it? ‘Bad Dancer’ will most likely be Yoko’s eleventh No.1 dance hit on Billboard’sDance/Club Play Chart. You will think of the B-52’s ‘Rock Lobster’, with its psychobilly surf-punk 4-note guitar riff… but wait, THEY were influenced by YOKO! ‘When your mind is dancing, your heart is bouncing!’ Members of the Beastie Boys collaborated on this one, and it was produced by Yuka Honda. There is a very cool video for this song!

“I love to dance. Any dance movement is interesting and ends up being great as it reminds you of our natural body and it’s movements. I say “reminds you” because we are losing our natural body movements every day by forcing ourselves to become part of the social ritual. Some people think that movements, such as the movements in ballet, are a higher cultural expression, whereas some are just dirt. I think it is elitist to think that a trained movement is more acceptable than untrained and possibly unrehearsed movements. Dance is fun. I am proud of what we did in the “Bad Dancer” video. We rocked!” – Yoko, Spin Magazine 2013

Opening with the tinkering sound of a music box, ‘Little Boy Blue’ is a haunting lullaby, not far from Yoko and Sean’s own truth. ‘Mommy’s weeping, daddy’s gone…’Yoko’s delicate singing morphs into haunting screams. Also with tUnE-yArDs.

‘There’s No Goodbye Between Us’ (A rough version was composed in 1980 and recorded in 1981 – previously released on Onobox in 1992). This could be a beautiful love song about anybody, but obviously, John has never left Yoko. Mellophones and backward piano loops bring a wonderful other-worldliness to the song.

“There’s No Goodbye Between Us” is pretty nice to play. But that’s the kind of thing that was in the pile. I think it was toward the end of the ’80s or maybe in the early ’90s when I first wrote it because a friend of mine who is a very good singer—a famous good singer—she doesn’t write her own songs, so she said, “Write one for me.” So I just wrote it. But then she didn’t use it!

The funky ‘7th Floor’ (with Questlove) has some crazy beats. Lyrically, it’s an amalgam of all the nightmares that Yoko must have had on the 7th Floor of the Dakota after John’s death. She sees a dead body on the sidewalk, imagining that it is her own, then realizes that it’s just a shadow. Angrily, she threatens a phantom killer.

“’7th Floor’ is the conceptual jump in a way. I just wanted to do something that furthered the form of my lyrics and music. The song is about a kind of reality that hasn’t been expressed or pursued yet. We are living in a three- or four-dimensional world, and this is more like a fifth or sixth dimension. The death of John is something you can clearly understand is not finished yet. And I don’t know whether it’s ever going to be finished. We had a very strong and powerful relationship. That will always be there.”

The stunning ‘N.Y. Noodle Town’ is Yoko’s anthem to her hometown, New York City. There is actually a restaurant called Great N.Y. Noodle Town in New York City, very near to where Yoko performed her concert at the Bowery Ballroom on Sept. 15, 2013. This song has a beautifully poignant guitar solo! It originated as an introduction (with only keyboard accompaniment) to ‘We’re Dying’ (‘I’m Dying’ {Rising} ) in a live performance at Chicago’s Pitchfork festival on July 14, 2007.  Yoko introduces the song as having been written on the day of the performance, ‘the kind of thing we used to do in the 70s.’

The song ‘Take Me To The Land Of Hell’ is surprisingly a ballad. ‘Moon River’ becomes Blood River, which Yoko asks to take her to John. She is going through hell and back to reunite with him. ‘Where you and I meet soul to soul, to never be apart again’. This piano based lament echoes ‘Mrs. Lennon’ and also evokes Nico’s beautifully chilling, ‘You Forget To Answer’.

“The whole world was giving me hell, John and me. We were surrounded by really nasty people,” Ono explained. “But we were in love, and our heaven was created right in hell. And in a way, we never wanted to escape from it. We were in love and it’s fine that we were in hell. So Take Me to the Land of Hell is like, ‘Take me to the land where John and I were.'” Yoko, The Atlantic Wire Sept. 2013

‘Watching The Dawn’ reminds us that we are ‘offsprings of lovers & dreamers, and ‘descendents of thinkers and builders”. Yoko ruminates about our transformation into evil leaders and victims. She is compelled to tell us that it is still possible to hold onto our dreams in this frightful world. This is hard to believe after all of her hardships, but Yoko is still trying, still hopeful.

In the vein of ‘Yes, I’m Your Angel’ (Double Fantasy), ‘Leaving Tim’ is a playful old-fashioned tune. It’s great to hear the laughter! However, the lyrics indicate that the song could be about ending her long relationship with Sam Havadtoy, which began in 1980, and ended when Sean was grown. Yoko reflects upon being “always in despair.” She asks him to “Remember to call me in your dream.”

‘Shine, Shine’ is the ultimate wakeup call. It is driven by an incredible bass line, similar to the powerful ‘Why’ (from Yoko’s first Plastic Ono Band solo album, 1970), but with positivity, love and light! The song ends in a vortex of sound that sucks every thought out of your brain except for the one that says, “This is now my favorite album of all time!”

‘Hawk’s Call’ could possibly be a cover version of John Cage’s 4’33”, or a reprise of the ‘Nutopian International Anthem’.

The very first form of music that existed must have been just like Yoko’s – millions of years ago – before language, before instruments…the first prehistoric bird call, the grunt of a cave man, the first vocal expression of joy or sadness. The music of the future will probably resemble hers as well (whether it be made by humans or aliens).

I really hope there is an afterlife for one reason only – so that John Lennon can see all of Yoko’s triumphs, and know that his dream has finally come true. For all we know, he might be behind all of this.

“Did it matter that the whole world hated you if your guy loved you that much? Who cares if you had to live in hell with him? Some couples might be lucky to live in heaven. John and my heaven was in Hell. And we loved it. We would not have wanted it any other way.”

This is an all-embracing look at Yoko Ono’s life, music and art – in stunning detail.

2 thoughts on “PARADISE IN HELL”