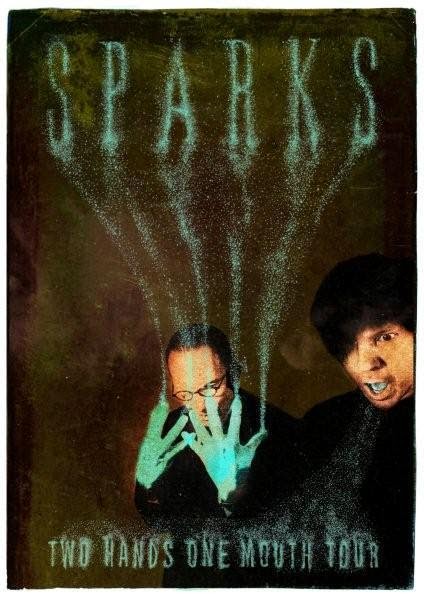 Live at The Trocadero, Philadelphia PA
& Highline Ballroom NYC
April 24 / 25 2013
By Madeline Bocaro
The name of Sparks’ current tour, Two Hands, One Mouth is anatomically correct. Ron and Russell Mael are using only these respective body parts to bring you the entire Sparks experience. Any less, and it would be the sound of one hand clapping. Any more would be too ordinary. The Mael brothers are constantly picking up and dispensing with instruments and band members. This time, they’ve purged everything and everyone.
Could it still be dynamic? Would it sound complete? Could they pull it off? Would we be wondering, ‘Where did the groove go?’ The answers are yes, yes, yes and NO! Like a brilliant actor losing himself in a role, Russell interprets the songs so intensely that you do not even realize that there is no band. Ron’s keyboard playing is all encompassing. Their minimalist approach remains interesting, because Sparks’ extraordinary compositions are filled with hundreds of notes and multitudes of words. The brilliant lyrics are now clearly in the spotlight, receiving their deserved accolades.
Sparks – the original synth duo, who brought us No. 1 In Heaven thirty-plus years ago, has gone back to basics. They have even dispensed with the cumbersome synthesizers of yore, while their contradictory copycats are touring with full bands these days!
The real trick is to span their entire catalog, and make it come alive in its purest form. In many ways, they are working much harder, proving that ‘less is more’! The tour started in Lithuania, then travelled to Japan, Europe and culminated with ten shows in America. Audience reactions were wildly spectacular. The dynamic of Ron and Russell’s personalities is integral to their music and endearing to their fans.
In their first East Coast appearances in more than ten years (since their 2002 Lil’ Beethoven show in Central Park), Sparks played in Philadelphia (4/24) and in New York City (4/25).
Russell must have swallowed some magic beans right before each performance.  His voice was full and flawless – as glorious as ever. First, Ron appeared onstage alone to play an overture medley of iconic moments from many Sparks’ songs that we all know and love. Russell also announced, ‘…some songs from our opera, The Seduction of Ingmar Bergman.’ We were all invited to ‘The Wedding of Jacqueline Kennedy To Russell Mael’. We heard gems from Propaganda, Indiscreet, Lil’ Beethoven, Hello Young Lovers and many others from their twenty-two albums.
During ‘Beat The Clock’, Russell briefly took over keyboard duties. Ron emerged front and center, and with Two Feet, Two Legs, he erupted into his infamous shuffle dance, to everyone’s delight.
The sold out New York City show surpassed all expectations. The sound of thousands of hands and mouths clapping and screaming for an encore filled the venue. The finale was a song titled after the name of the tour, which ‘satisfied’ everyone.
The promise that they would be back again soon was the icing on the cake!  Good night, that’s all.