Skip to content
GODZILLA GOES HOLLYWOOD
…AGAIN!
By Madeline Bocaro
Ishiro Honda’s Gojira (1954) is celebrating its 60th anniversary in theaters around the world. The King of the Monsters is a legendary pop culture icon. The first Godzilla film was a serious statement about the political relationship between Japan and America after the nuclear attacks on Hiroshima and Nagasaki. Godzilla was a mutation – the personification of the atom bomb. The cretaceous chimera was disturbed by the radiation of the atomic blast, and came ashore to run rampant in Tokyo, annihilating everything in his path. The moral: if nuclear tests continue, another monster will appear.
Godzilla was originally portrayed by an actor wearing a Latex costume. (Actually, thirteen different suits were designed for twenty-five films). Soon came stop-motion animation, and eventually he became computer generated. Over the years, the monster varied in height, physical ability, intelligence and motive. Some of his monster foes later became his allies.
Godzilla caused tsunamis by simply approaching the shore. Over the years, he morphed from monstrous to anthropomorphic, from malicious mutant to Earth’s savior. He was never  malicious toward humans. Godzilla fought alongside humanity against threats and against other monsters. We even loaned him to Planet X – along with Rodan – to fight Monster Zero (Ghidorah). In other films, Godzilla battled more evil creatures, protecting Earth from their wrath. He did an endearing little victory dance after slaying Ghidorah! We warmed up to his somewhat human qualities; his goofy clumsiness and vulnerability under attack from other monsters. We rooted for Godzilla in battle. His son, Minilla blew little atomic smoke rings, and showed empathy toward children.
Godzilla had monster allies as well. We became sympathetic to him despite his wrath. As he became less destructive and more heroic, Godzilla got a star on Hollywood’s Walk of Fame on his 50th anniversary. At the end of each film, after Godzilla’s defeat of each monster foe, there is a parting distant shot of his back as he returns to the sea. During his retreat, he gains our utmost respect. We are somehow reassured that he is still lurking there in the depths to protect us in case of another monster attack – the ultimate in animism.
In the Hollywood remakes, Godzilla feeds on radiation. Weapons of mass destruction are made to battle the ancient creature should he re-emerge from the ocean. This is contradictory to the anti-war moral of Godzilla’s story. Hollywood films have no gratitude nor respect for Godzilla.
Here is a spoiler alert that you won’t mind reading. It might save you a lot of time. Almost two hours into Legacy’s 2014 Godzilla, there are NO MONSTERS! There is lots of banter by scientists and scholars with no real story to speak of. During HOUR THREE, the foe, MUTO (Massive Unidentified Terrestrial Organism) an evil looking insect/bat searches for its pregnant mate. Together, these two get more screen time than Godzilla himself! Lots of nukes are fired (ignoring the moral of the original film – have we learned nothing?!) and chaos ensues.
A scientist correctly urges the military to “Let the monsters fight!” Anyone should know from experience that we can totally rely on Godzilla to fight these crazy bats! Despite this order, more shooting ensues as the monsters destroy San Francisco. Godzilla is indestructible (against anything but an oxygen destroyer). Why are we still shooting at him? To the film’s credit, Godzilla defeated the MUTOs and shielded humans many times. Yet he was far too evil in appearance, and most of the fight scenes were in the dark, obstructed by pouring rain.
Dear Hollywood,
We want more monster action! We want more meaningful monsters that teach us lessons! How about a real monster mash-up – a Godzilla vs. Ghidora vs. Rodan vs. Mothra (and her creepy twin larvae) vs. King Kong reunion/re-match! Let them all trample Universal Studios and destroy some iconic movie and TV sets, like Hitchcock’s Psycho house. Let’s see them stomp down Hollywood Boulevard and destroy the Walk of Fame! Let’s have them heading for the hills, playing Scrabble with the HOLLYWOOD sign.
We want the Ito twins* (The Peanuts) – the fairies who interpreted for Mothra and sang her theme song! How about the sexy alien clone heroine Namikawa from Planet X! There is so much to work with here! You can’t just put Godzilla’s name on your movie and sit back and collect our money. We want our old Godzilla! And bring back the latex suits!
Thank you very much!
Madeline
*See my tribute to the Ito twins (The Peanuts) – Music & Monsters!
http://madelinex.blogspot.com/search?q=music+%26+monsters 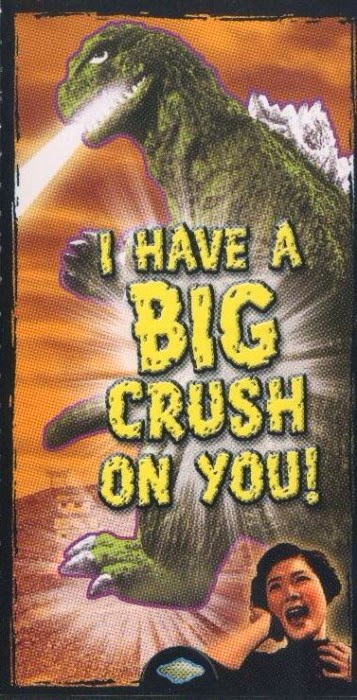