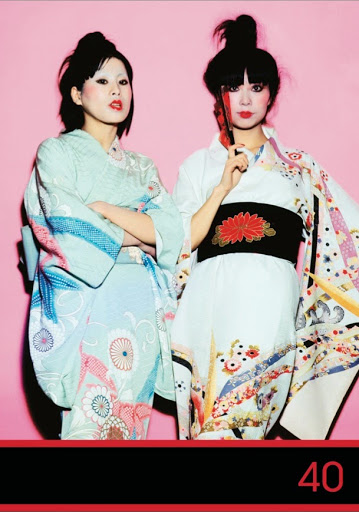 SPARKS
BRINGING IT ALL BACK HOME

With the Heritage Orchestra

© Madeline Bocaro, 2014. No part of this site may be reproduced in whole or in part in any manner without permission of the copyright owner.

As we entered the elegant Barbican hall, various recordings of the popular song ‘Come-on-A My House’ set the evening’s jubilant theme. Sparks were about to perform their third album, Kimono My House on its 40th anniversary. As the album was recorded in London, this was the perfect place and time for this momentous occasion.

The lights dimmed as the 38-piece Heritage Orchestra took the stage with its conductor, Jules Buckley. We were swept away by a bombastic, Wagnerian overture with snippets of our beloved KMH melodies weaving in and out of the aural whirlwind. It was a justifiably pompous prelude to the amazing journey we would be taking during these two celebratory evenings at the Barbican!

In homage to the classic album cover, the kimono-clad Mael brothers appeared at opposite ends of the stage, ceremoniously approaching each other like Sumo wrestling opponents. Ron sat at the grand piano, Russell grabbed the microphone, and the magic began!

The orchestral performance of Sparks’ classic album was aflutter with glissando strings, dramatic pauses, trills, tremolos and countless crescendos. Bravissimo! Each song was given a customized score befitting its character, by award-winning arranger Nathan Kelly.

‘This Town Ain’t Big Enough For Both Of Us’ was cinematically glorious. The arrangement was reminiscent of the Plagiarism version – times one hundred!

‘Amateur Hour’ would have impressed Yehudi Menuhin! It deceptively began in a minor key until Russell’s flawless vocals kicked in. ‘Falling In Love With Myself Again’ became a grand Weimar waltz with thundering kettledrums. Ron achieved a whimsical calliope effect on his keyboard.

During ‘Thank God It’s Not Christmas’, we wondered how an anti-Christmas song could invoke so much holiday spirit! Visions of sugarplums danced in our heads, as flickering white lighting evoked a delicate snowfall. Sleigh bells and glockenspiel rang and chimed in glorious union. Enhanced by a heavenly harp, the song became an enchanting yuletide anthem.

‘Hasta Manama Monsieur’ broke out into a full rock rendering at its coda, as Russell wielded castanets. He encouraged double-time handclaps from the audience throughout ‘Talent Is An Asset’. The earnest musicians played on, as Russell recited a litany of things and people who should ‘go away’ from little Albert Einstein.

An eight-minute long ‘Equator’ began simply, with glockenspiel and trombone. Russell encouraged a sing-along, but reprimanded the audience for tempo and pitch. He teased, calling us ‘semi-pros’  “You can’t sing that high, can you?”

Ron and Russell thanked the audience for the accolades and ovations. They also thanked the three great musicians with whom they recorded the album in 1974; Martin Gordon, Adrian Fisher and Dinky Diamond.

An intermission was needed to fully absorb the exhilarating grandeur we had just witnessed. ‘The Rhythm Thief’ began a second hour of ten orchestrated Sparks classics, which included ‘Let The Monkey Drive’, ‘When Do I Get to Sing ‘My Way’?’ ‘Dick Around’ and selections from The Seduction of Ingmar Bergman. It is amazing how similar they sounded to the album tracks. (Ron is usually ‘the orchestra’, masterfully wrangling symphonic sounds from a keyboard synth!)

Two Indiscreet album tracks came to life. Russell’s whistle blow signaled the unmistakable start of the festive march, ‘Get In The Swing’. The Big Band sound of ‘Looks Looks Looks’ became even bigger! The octave jumping ‘Pulling Rabbits Out of a Hat’ was string driven. ‘No 1 Song In Heaven’ featured ethereal harp, bells and chimes.

Both nights’ performances were equally stunning, The second show was more memorable, due to Ron’s slip-up, brush-off and quick recovery from his clumsy, yet endearing Vaudevillian shuffle dance.

Then it was stripped back down to Two Hands, One Mouth, as the Mael brothers performed their most grandiose opus ‘Change’ alone, acoustically – with the entire orchestra sitting silently behind them. Their services were no longer needed. Or maybe Sparks just didn’t want to pay them overtime!