The new FFS album gives a nod to almost every era of Sparks. It indiscreetly plagiarizes Sparks’ propaganda, introducing the exotic creatures to a whole new audience of young lovers. Lil’ Beethoven and Ingmar Bergman would be proud. It will soon be No. 1 in heaven, and in outer space!

The album also features the punchy pop sound of Franz Ferdinand. Yet there are some tracks that are truly outside the musical box that either band could produce on their own. There are many refreshing moments of madness and mayhem! 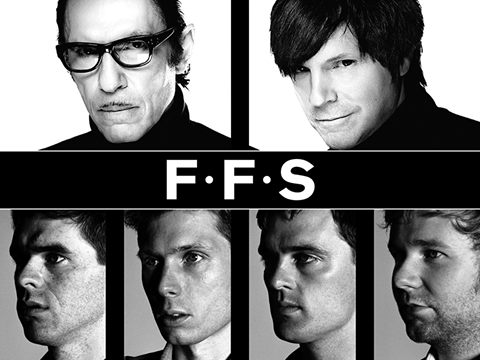 Johnny Delusional – Music and lyrics by Ron and Russell Mael. A killer opening track! This was the last song written for the album. It was submitted only a week before the recording sessions started in October 2014 at RAK Studios in London. Beautiful countermelodies highlight and empower this shared Russell/Alex vocal performance, evocative of those at the end of ‘Reinforcements’. After some serious grand piano chords, it becomes pure Power Pop, with a gorgeously melodic guitar lick. Familiar Sparksian themes prevail; inferiority, angst and certainty of rejection. A revolutionary counter-clockwise video was created for this song.

Call Girl – Music and lyrics by Alex Kapranos and Ron Mael. Alex sent lyrics to Ron, who initially wrote the music. Alex re-worked it, so the music became a hybrid of the two. Groovy electro bass sounds are similar to those on ‘Good Morning’ (ECOTD). In the end, the ‘Call Girl’ is not really a call girl at all. She never calls!

Dictator’s Son – Music and lyrics by Ron and Russell Mael. Alternates between a creepy nursery rhyme and sinister themes of espionage. The dictator’s son flees his dad’s regime and high-tails it to Los Angeles, (of course) where he becomes irrevocably immersed in Americana. He had planned to return and overthrow his dastardly dad, but we get the feeling he will be distracted for a while on Instagram. Love the weird final note!

Little Guy From The Suburbs – Music and lyrics by Alex Kapranos. Based on the French criminal Jacques Mesrine. Alex’s original version of the song wasn’t a ballad but a traditional pop/rock song. In the studio the band rearranged and recorded it as a ballad with Ron playing organ. Alex leads off vocally – subdued and serious with tones of disappointment and regret.

Police Encounters – Music by FFS, lyrics by Ron Mael/Alex Kapranos. FF sent the instrumental track to Ron and Russell, who wrote the vocal melody and lyrics. Alex added the first two lines (“From the West Coast gonna take a plane, Hit the East Coast gonna take an A train”). A tourism poster for Harlem? A Caucasian visitor gets caught in an odd snafu of inverse racial profiling. He is strong-armed by the police, but this does not inhibit his attraction for the policeman’s wife. And in Harlem he stays – indefinitely. The ultimate in weird pop perfection, with an ‘Upstairs’ kind of style (although FF supplied the music). 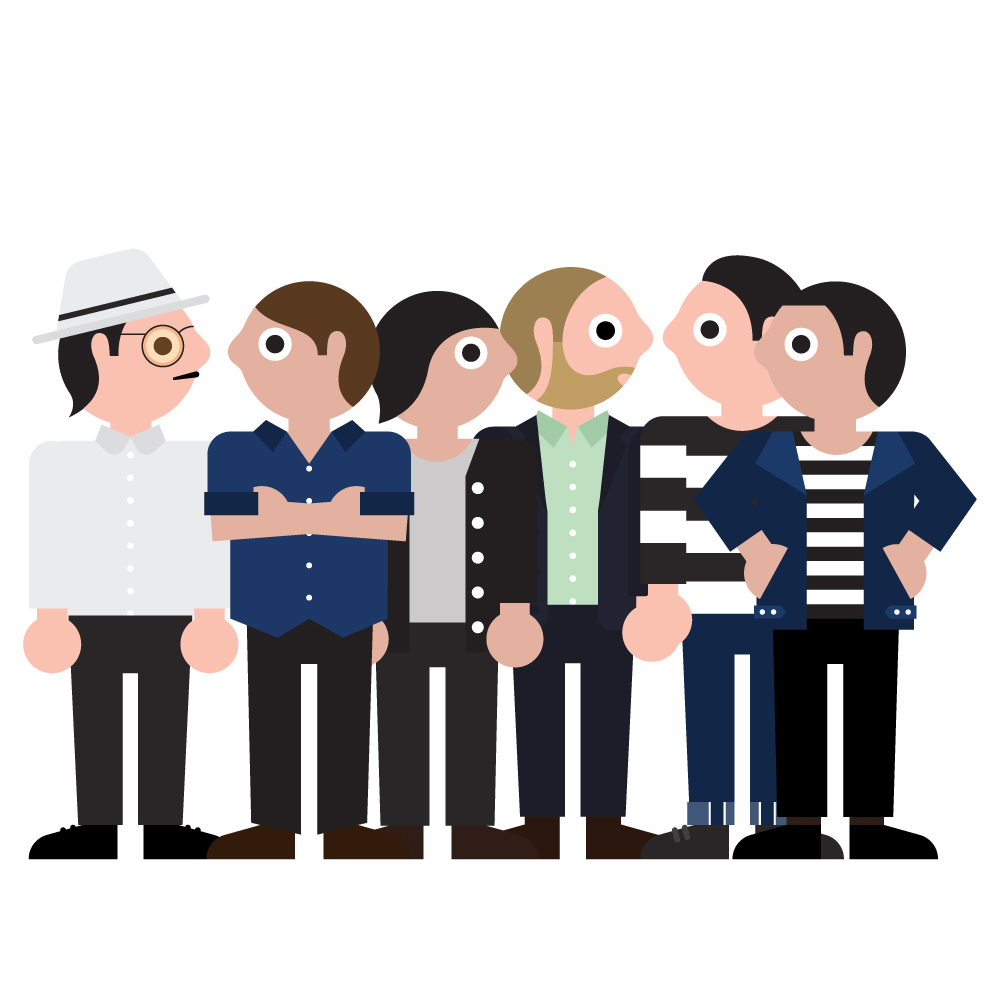 Save Me From Myself – Music and lyrics by Ron and Russell Mael. A grand piano arrangement, with an angelic bridge, and at least three movements. Lyrically, this would fit well on Introducing, and musically, on Hello Young Lovers. It could have been called ‘Don’t Leave Me Alone With Myself’ (it musically echoes Sparks’ ‘Don’t Leave Me Alone With Her’ from Propaganda as well.) Out on the streets there is nothing to fear. Pestilence and violence are trivial perils, but the paranoid protagonist is deathly afraid of his own shadow, as he is sleeping with the enemy!

So Desu Ne – Music by Alex, lyrics by Alex/Ron. The song was originally called ‘Fuji’ but Ron came up with the Japanese title ‘So Desu Ne.’ Meaning ‘Is that so? or ‘Don’t you think?’  It has a wonderful upbeat retro techno J-Pop flair recalling YMO. The Polivoks can be heard happily chugging along. (The Eastern Bloc synth, produced in the Soviet Union from 1982-1990 gave FF their signature sound).

Man Without A Tan – Music by FFS, lyrics by Ron Mael. FF sent the instrumental track to R&R, who wrote the vocal melody and lyrics. It starts out like the Soft Cell version of Gloria Jones’ ‘Tainted Love’. (with the groove of the Capitols’ ‘Cool Jerk’), but quickly switches to rapidly spoken vocals, invoking ‘Let The Monkey Drive’ or even ‘The Studio Commissary’ on the Bergman soundtrack. Just because one is pale, it doesn’t mean that he is not fascinating! It’s the new metrosexual manifesto!

Things I Won’t Get – Music by Nick McCarthy, lyrics by Ron Mael. Another hopeless lyric supplied by the guy who penned ‘I Wish I Looked a Little Better’. His litany of unattainable things (tangible and intangible)  is endless.  At least he has a girlfriend this time. And she is clean!

Power Couple – Music and lyrics by Ron and Russell Mael. A ‘Sharks vs. Jets’ style musical number. Call-and-response spoken vocals between Russell and Alex. The intimidating stomp conjures up images of ‘Big Boy’. Musically, it encompasses cinematic themes from The Seduction of Ingmar Bergman. A nice synthetic warp belies elaborate plans and preparations being made to entertain and impress ostentatious yet influential guests. The wine glasses are cleaned, Segovia is cued up – ‘it’s such a big deal!’

Collaborations Don’t Work – Music and lyrics by Ron and Russell Mael, except for the break by Alex Kapranos and Nick McCarthy (when the seven-plus minute long epic morphs into something else entirely with an acoustic section). Ron and Russell sent the operatic piece to FF, and they responded with a one-minute ‘rebuttal’, which was inserted into R&R’s song. It’s almost a song within a song! (Similar to McCartney’s brief interlude within Lennon’s ‘A Day In The Life’.)

What better way to start off the collaboration than jinxing themselves in a song title? Add these names to Kant and Yehudi Menuhin on Sparks’ impressive name-check list; Mozart, Hadyn, Warhol, DeKooning, (Frank Lloyd Wright), Liberace, the Dalai Lama…people who did it all by themselves. The section in which the singer asks the stars in the sky for musical direction is reminiscent of the ‘Oh My God’ sequence in The Seduction Of Ingmar Bergman. This is followed by an escalating hypothetical argument between the collaborators (about the tribulations of collaborating). They are obviously being facetious, since this has all worked out so well!

Piss Off – Music and lyrics by Ron and Russell Mael. This was the first song written for the project after their initial meeting in 2004. The original demo had Dean Menta playing guitar and drums. It took 10 years before it was recorded with FF. Both bands have not taken their own advice, as they are now immersed in each other’s worlds.

So Many Bridges – Music and lyrics by Ron and Russell Mael. Written at the same time as ‘Piss Off’ after their initial meeting in 2004. The rockier demo had Dean Menta on guitar and drums. It also took 10 years before the song was recorded with FF. The new version has echoing vocals, and the BRIDGE is quite lovely.

King Of The Song – Music and lyrics by Alex Kapranos. Fond memories of a questionable dad’s lullabies.

Look At Me – Music and lyrics by Ron and Russell Mael. An attention craving character wants to be the main focus. A sizzling intro and a sputtering synth break. Alex’s vocal style and phrasing resemble David Byrne on Talking Heads’ ‘Psycho Killer’. Russell’s vocal and the beat marry ‘Dance Godammit’ and ‘Candy-O from The Cars’ second album.

A Violent Death – Music by Ron and Russell Mael, lyrics by Alex Kapranos. A surprisingly morose lyric (uncharacteristic of both bands) set to melancholy yet moving music. This is literally (about) a train wreck! 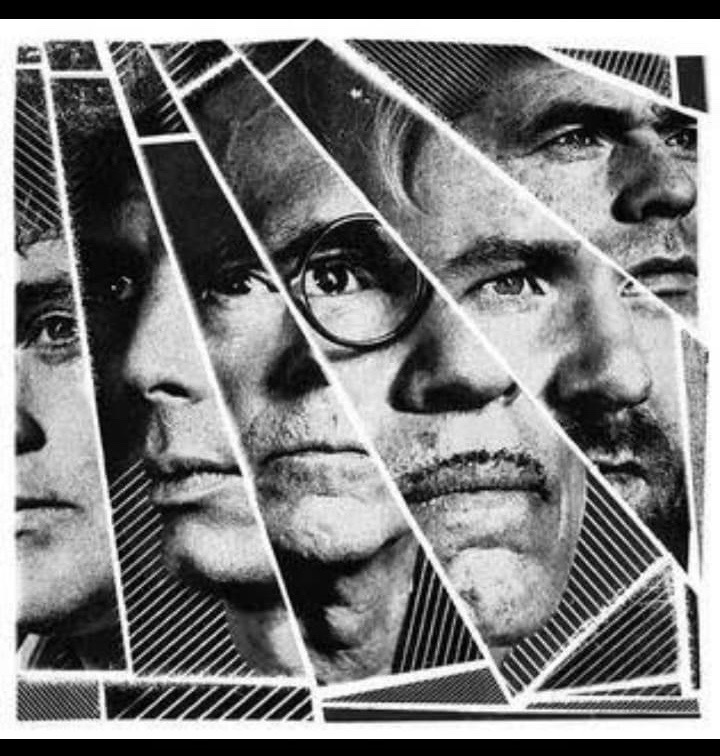