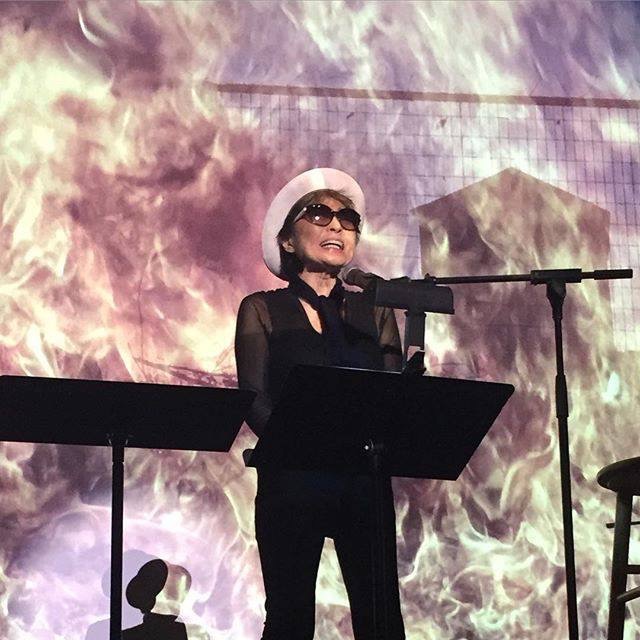 It is truly the Summer of Yoko in New York City. Yoko Ono One Woman Show at The Museum of Modern Art is in full bloom. She presented two delightful evenings of films and lectures in July. And we were just treated to a couple of intimate and unique Plastic Ono Band concerts. We are starting to actually recognize the ‘bottoms’ in Film No. 4, which again opened the evenings’ performances.

In a small film theater adjoining MoMA, Yoko Ono went jazz! Each concert began with a set of duets between Yoko and a single instrument, which lead to magical musical moments. Short poems and stories were interspersed between songs.

With a backdrop of home movies from 1930s Japan, Yoko unknowingly created a small, twisting and gyrating shadow upon the screen, amidst flickering images of her young life. The first film showed her dad and his business colleagues in the streets of Tokyo, and later boarding an ocean liner heading for America.

First, she signaled Denardo Coleman (son of the late, great free jazz artist Ornette Coleman) to start off on drums. Honoring Yoko’s collaborations with his dad, Coleman’s performance was magnificent! Yoko improvised vocals over his crazy beats. Yoko pointed to the guitarist Alan Licht (who conveniently specializes in noise, minimalism and free jazz) for her next duet. Soon after, Erik Friedlander’s cello provided the best relationship. Yoko’s woeful tones matched the instrument perfectly – they were in complete synchronicity.

All three instruments jammed together while Yoko finished the piece with a succinct and sweet, “OK that was fine!” This was a refreshing change from the usual rock format to the more unrestricted jazz of these two performances. It was perfect for Yoko’s free vocal style.

At the start of ‘Rising’, the film backdrop showed the Arising film, with intensifying flames. Next was the quiet ‘Will I’, and ‘Take Me to the Land of Hell’ backed by the silent black and white film shot by Karl Lagerfeld called The Secret of My Long Life. With its retro quality and narrow vertical aspect ratio, it is reminiscent of a Charlie Chaplin film. It features Yoko in a black suit and hat (actually resembling Chaplin) simply dancing. The film has a stop-motion aspect as well. ‘Higa Noborou’ featured piano accompaniment. Then came another wild free-form jazz segment.

Short poems and stories were interspersed between songs. Clips from Yoko’s Fluxus films were also part of the performance, along with endless home movies of Yoko as a young child; a little girl being coddled by her mom, dancing, playing with dolls, toys, instruments and playfully trying to wake her sleeping mother.

What happened to this child between then and now is unfathomable. Yoko is now translating everything that she could not express as a child, as her young self carries on playfully behind her on film. Why does Yoko, who speaks two languages fluently, choose to completely evade words? BECAUSE THERE ARE NO WORDS!

We all know the hardships that Yoko has suffered; as a woman, born in a war-torn country, a misunderstood artist, the wife of John Lennon and the cruel way he was taken from her. This is her expression of all these things. There are moments of anguish, distress and sadness. Then there are lighter tones, of beauty and purity. It seems as if Yoko is communicating with something otherworldly. Talking to the universe, or to the child inside herself. Or perhaps translating the cries of animals, birds and trees. Speaking for everyone and everything in pain, in need, or in love. Imagining peace.

Between the music, there were endearing moments. When Yoko glanced up at an old film clip of her kimono clad family in front of their home, she exclaimed mid-song, “That’s my grandma!” in her sweet childlike voice. Walking over to the guitarist, she asked him to please open the cap on her water bottle. Conducting the proceedings, she would say, “OK let’s have some jazz now.”

Now is her time. With her One Woman Show at MoMA and increasing worldwide acceptance and understanding, Yoko is at the pinnacle of her life’s work. Yet there are many things still haunting her. Through this comes her true art.

Frames from the Karl Lagerfeld film, The Story of My Long Life: