Skip to content
DO YOU KNOW HOW TO PONY?
Patti Smith
Horses 40th Anniversary celebration
Live at The Beacon Theater, NYC
By Madeline Bocaro

We knew this was greatness, before it could even be defined. There was nothing else like it, and there never has been. Patti Smith’s now classic debut album, Horses is an extended poem that rides a rock n’ roll wave – a sea of possibilities. Words surge and swell amidst timeless three-chord rock n’ roll, jazz passages and punky reggae beats. Images and auras of dead French poets and rock stars come alive. The ghosts of her heroes all sing through Patti’s voice and howl through Lenny Kaye’s screaming guitar.

The songs of Horses were written in New York City. In the midst of an emerging new scene called Punk Rock, came this androgynous young woman in a man’s white shirt, who blew our minds. She turned us on to her rock n’ roll idols, to poetry and books. Patti was literally a beat poet. The album, Produced by John Cale was recorded in New York City, at Electric Lady (with the ghost of the studio’s creator Jimi Hendrix close by). It was due to be released on Patti’s idol, 19th century French poet Rimbaud’s birthday. However, because of a vinyl shortage, it was delayed until November 10th – coincidentally the date of Rimbaud’s passing.

On this November 10th, 2015 Patti was elated to be performing the entire Horses album on its 40th anniversary, in it’s birthplace. It’s unbelievable that 40 years have passed. Patti’s dear friend and partner, photographer Robert Mapplethorpe, shot the iconic black and white cover portrait for Horses. (Robert was lovingly immortalized in Patti’s book about their amazing relationship Just Kids). Today, Mapplethorpe’s print is part of the Tate Collection in the U.K., and justly regarded as a classic portrait.

It was a lifetime ago, but Horses still resonates. Patti performed without one iota less of conviction, passion, energy and abandon. The only evidence of time passing was her long silvery gray hair. The spectacular show featured Patti’s impeccable band, Lenny Kaye and Jay Dee Daugherty (who both played on the album), Jack Petruzzelli, and Tony Shanahan. Monochromatic video graphics and clothing set the evening’s ambiance.

After a reading of her poem Compacted Awareness right from the album’s back cover, Patti’s version of ‘Gloria’ by Them (Van Morrison’s 1964 band) begins with the most unapologetic phrase ever uttered, ‘Jesus died for somebody’s sins, but not mine.’ (based upon her earlier poem, Oath). Her electrifying performance lived up to the song’s legend. The playful reggae romp of ‘Redondo Beach’ was joyful, contrasting the despair of a gay lover’s suicide.
Patti went into a zone on ‘Birdland’, spewing words and poetry like wildfire, truly giving the song wings. This is her ode to Austrian psychoanalyst Wilhelm Reich via his son Peter’s 1973 memoir (later interpreted by Kate Bush in her song ‘Cloudbusting’). ‘Free Money’ levitated us all.

Patti illustrated how to flip the album over, put the arm down and insert the needle into the groove for Side Two. The sweet ‘Kimberly’, written for her sister, charmed everyone. Patti told the story of how ‘Break It Up’, came from a dream she had about Jim Morrison breaking free from within a marble statue of an angel bound with chains. Lenny’s guitar really soared on this one.

The epic ‘Land’ morphs from the narrative rape of Johnny, into a dance song, a suicide, and then ascension with Chris Kenner’s ‘Land of A Thousand Dances’. Tonight, Patti went free form lyrically, then morphed it back into another rousing version of ‘Gloria’.

Patti’s somber ‘Elegie’, which she wrote with the late Allen Lanier, was originally about Jimi Hendrix. Today, it was also about Allen, and a litany of our beloved icons that have passed over the last 40 years. Patti named names for several minutes, which was heart wrenching, as we all knew and loved them. She had us all in tears, especially when naming all four Ramones, Lou Reed, Jackie Curtis, Candy Darling and her husband Fed Sonic Smith.

Another hour of classics rolled on. The band took over for a Velvet Underground tribute (it is the band’s 50th anniversary). With her son Jackson joining in on guitar they played ‘Rock n’ Roll’, ‘I’m Waiting for the Man’, and ‘White Light/White Heat ‘.

Patti returned onstage for the uplifting ‘Privilege (Set Me Free)’. Next came ‘Beneath the Southern Cross’, ‘Dancing Barefoot’, (Springsteen penned) ‘Because the Night’ with her daughter Jesse on keyboards. A rousing ‘People Have the Power’ was complete with Patti’s fervent rallying cries for us to rise up and take control!

The scorching encore was Patti’s complete shredding of The Who’s ‘My Generation’. Breaking every single string, and holding up her guitar triumphantly, she displayed it as ‘The weapon of our generation!’ She reminded us (screaming) that we are still free, to keep fighting and rebelling against corruption, injustice, big business, hunger and war. She encouraged us to keep dreaming, as her generation had done. The line ‘I hope I die before I get old’ was given a whole new twist, ‘I am fucking old, and I’m going to get older – I’m going to live until I’m 120!’ Well Patti, let’s hope so!

After thanking everyone involved, Patti declared her extreme fondness for Horses, ‘…recorded by a young girl who is still in my heart.’

A brief semi-acoustic set by Michael Stipe started the evening, with five cover songs, including ‘Imagine’ a chorus of the V.U.’s ‘Venus In Furs’ and Mott The Hoople’s ‘All The Young Dudes’, with Jesse Paris Smith on keyboards.

The Horses 40th Anniversary world tour continues with shows in Brussels, Paris, London, Italy, Germany and in the USA. 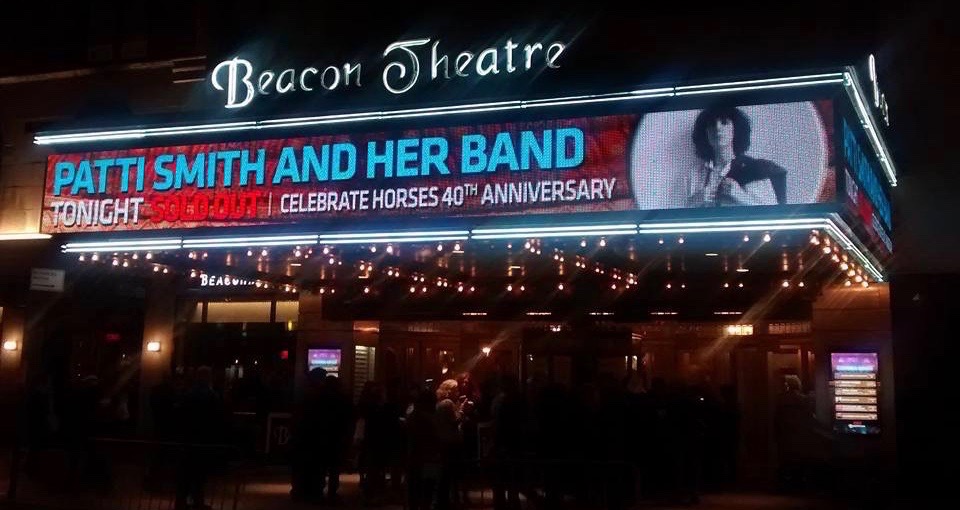