Mott The Hoople were extremely fond of their wildly passionate, loyal and steadfast fans, but their live gigs always outsold their four albums. The band was at a breaking point. 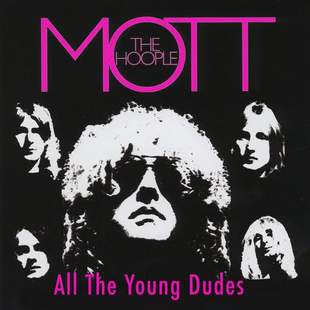 David Bowie gave Mott the song ‘All The Young Dudes’ after their bass player Overend Watts approached him for a job when Mott decided to disband in 1972. Bowie loved Mott and had seen their riotous live gigs. He first offered Watts the song ‘Suffragette City’. Luckily, Mott rejected that song in favor of ‘Dudes’. Bowie gave them the right song at the perfect time. ‘Dudes’ saved Mott from oblivion.
‘All The Young Dudes’ was recorded by Mott The Hoople in May and released on July 28, 1972. Bowie’s lyrics name-check his trend-setting friends from the gay discotheque, Yours And Mine beneath El Sombrero restaurant on Kensington High Street. There’s suicidal Billy, stealing Wendy, butch queen Lucy, the queen Jimmy and star-faced Freddie (Bowie’s clothing designer Freddie Burretti – nee Burrett). These real life characters inspired Bowie to write the future Mott The Hoople hit. The song celebrates the ‘juvenile delinquent wrecks’ of the 70s who are unable to relate to their brothers’ Beatles & Stones records, not wanting to live past 25, and stealing clothes from Marks & Sparks. Bowie used the Cockney slang phrase for “face” to describe Freddie’s funky little “boat race.” 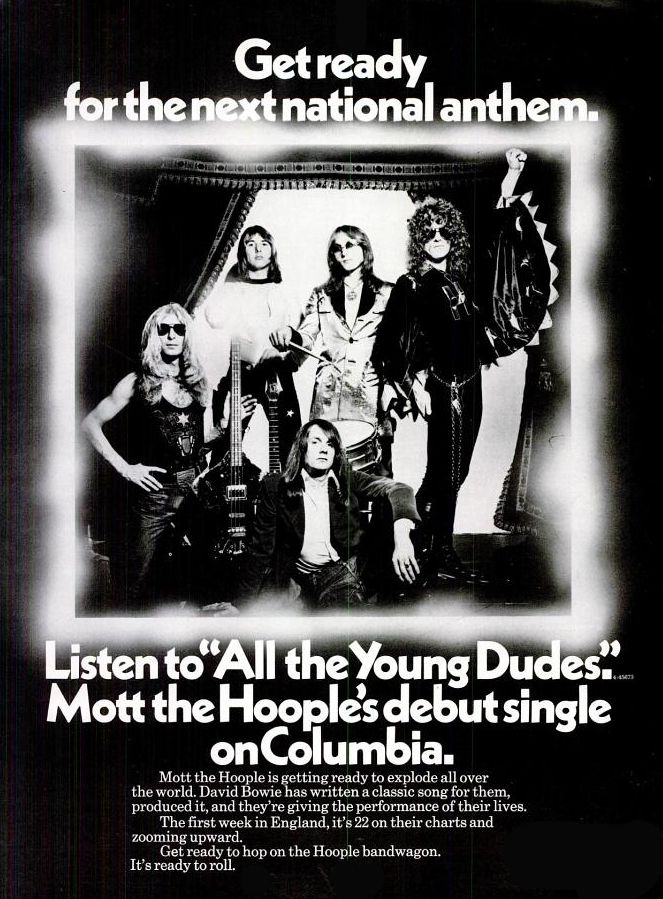 “We were the ‘young dudes’ who shaved off our eyebrows just for camp, because you could paint them on higher up — that gave us a strange unearthly look which David adopted. He was always open to suggestions and went through our wardrobes like a magpie!”
–       Wendy Kirby
‘‘Dudes’ is actually a very sad song. One line depicts a sad teenage Pierrot-like figure at the end of a performance: “Freddie’s got spots from picking off the stars from his face.” The narrator carries news of cultural and urban despair and decay – the aftermath of Ziggy Stardust’s apocalyptic ‘Five Years’ and a prologue to the year of the Diamond Dogs, set in the dystopian Hunger City where ‘Dudes’ became ‘Droogs’. A 1974 lyric sheet for ‘Future Legend’, the opening pronouncement of Diamond Dogs, bears Bowie’s crossed-out title, ‘Fugue for the Dude’.

“‘All the Young Dudes’ is a song about this news. It’s no hymn to the youth, as people thought. It is completely the opposite.”
– David Bowie
“I never saw anything all that sexual about Dudes as a lyric. I know it sounds daft, but to me it was just a great song. After Dudes we were considered instant fags in America. It was comical. A lot of gays followed us around, especially in America. We were scared at first because we all happen to be straight but then we started to talk to people and there wasn’t anyone pushing you. I met some incredible people. It’s like another nation. It’s just scary at first because we were small town boys, but once we knew no one was going to grab us every minute of the day, everything was fine.”
– Ian Hunter, The Horse’s Mouth 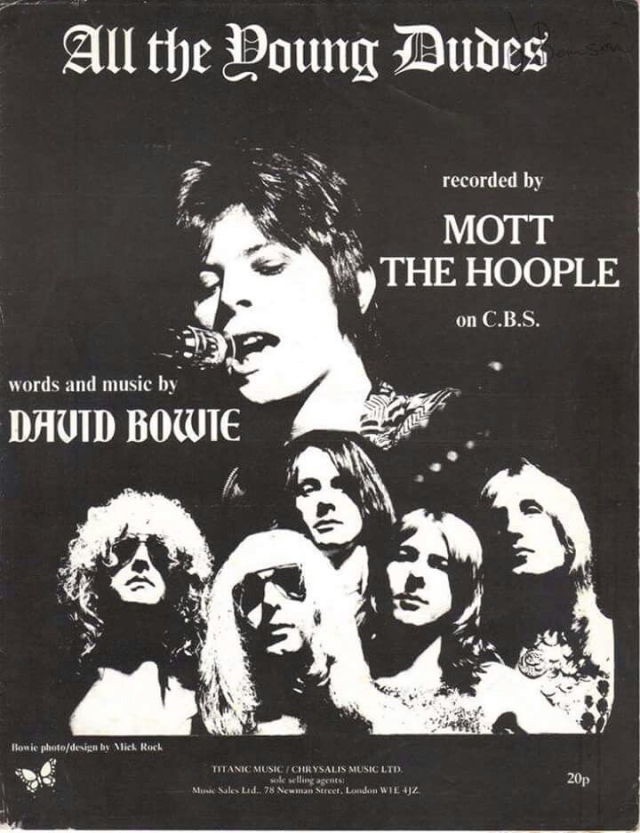 “Dudes sounded like a great rallying cry to all the dissaffected youth worldwide. With the addition of Ian rapping and ranting, the whole thing coalesced into an instant classic. I remember when Blue Weaver joined the ranks later on he played us an ancient early 1900’s, French recording of a melody identical to the melody of ‘ATYD’.”
– Dale ‘Buffin’ Griffin
‘Dudes’ was also a commentary on the early 70’s, and the glam/gay element was there in Bowie’s lyrics
“It’s a Gay Anthem! A rallying call to the young dudes to come out in the streets and show that they were beautiful and gay and proud of it.”
–       Lou Reed
“A song has to take on character, shape, body and influence people to an extent that they use it for their own devices. It must affect them not just as a song, but as a lifestyle. The rock stars have assimilated all kinds of philosophies, styles, histories, writings, and they throw out what they have gleaned from that.”
–       David Bowie (William Burroughs interview:
Beat Godfather Meets Glitter Mainman)Rolling Stone, February 28, 1974 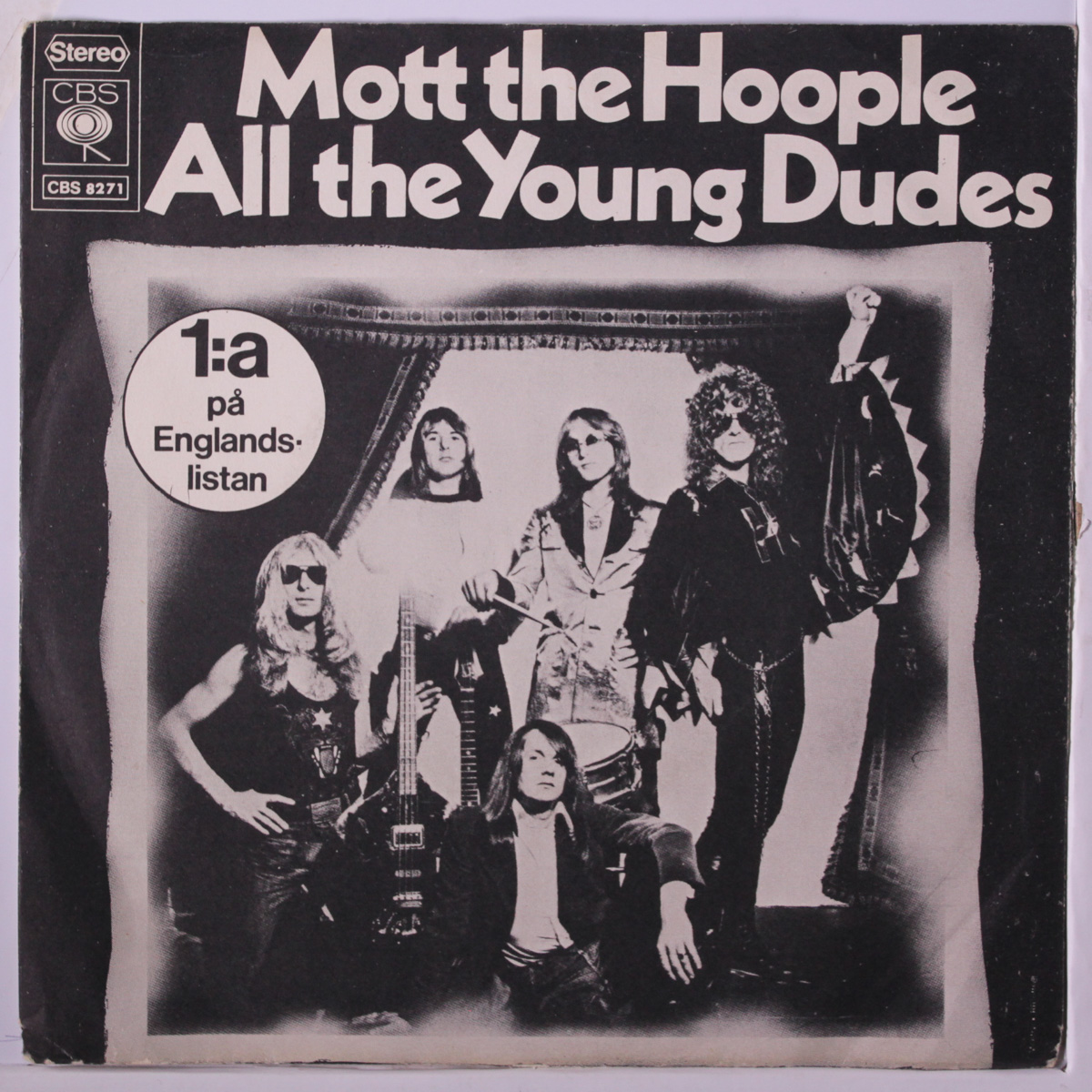 The ad-libbed ending was purely Hunter’s. In the fade-out ‘rap’, Ian is ribbing a kid in the crowd who is heckling the band, coercing the kid’s friend bring him to the front. Ian pulls him on-stage. The line, ‘Hey you with the glasses’ is from a 1950s radio show called the Billy Cotton Band Show.

Hey you with the glasses

I want you in the front!

Are you his friend?

I want him right here

How does it feel?

Ian: “We were doing the Rainbow, at Finsbury Park. And we had this thing where we’d always go quiet for ten seconds, and it always gave some areshole at the back an opportunity to shout: “You suck’ or equivalent thereof. Then It’d be: “Yeah, you’re his mates, bring him down the front.” They’d bring him down front and I’d pour a bottle of beer over him. That particular night, we came out of the Rainbow after the party at four a.m., and he’s outside waiting for an autograph in his sodden suit. Fast-forward a couple of weeks, we’re down at Olympic in Barnes doing All The Young Dudes, David’s sitting there going: “This is boring, “One of The Boys” is the hit.” And we’re looking at him thinking: “Are you out of your mind?” He said” “The back end just keeps going round, nothing’s happening.” So all I did was take the Rainbow chat and apply it to the back end of Dudes.” – Ian Hunter,Loudersound.com – February 2017

Ian’s vignette of a fan ending up onstage predicted the advent of Punk, when fans of Mott The Hoople (Mick Jones –Clash) and the Stooges (John Lydon – Sex Pistols) formed their own bands and incited others to carry their own news – which was the exact spirit of the song ‘All The Young Dudes’. Bowie of course, was in a completely different realm at the time, recording his albums Low, Heroes and Iggy Pop’s masterpiece, The Idiot.)

Ian voices his dreams of eventually having a hit record,

knowing that this would be the one!

I’ve wanted to do this for years!

Bowie introduced Mott The Hoople on stage at the Tower Theater near Philadelphia on November 29, 1972 and performed the song with them. (Released on Mott’s All the Way from Stockholm to Philadelphia in 1998 and the expanded All The Young Dudes in 2006). David also performed the song on his 1973 and 1974 tours. Twenty years after their Philly duet, Bowie and Ian Hunter performed ‘Dudes’ at the Freddie Mercury Tribute Concert with Mick Ronson on guitar in 1992. Bowie later performed it during his Outside and Reality tours. 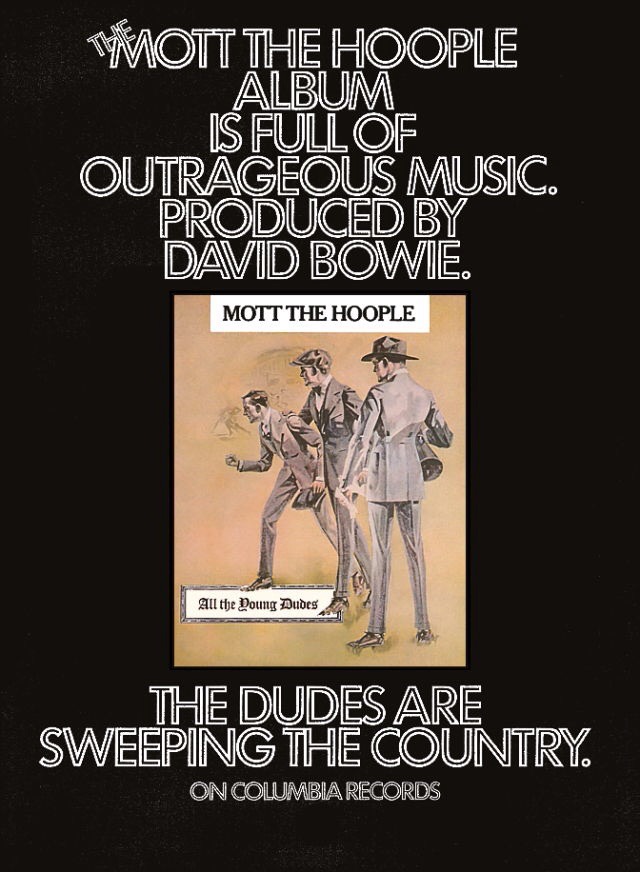 A version of the backing track for Mott the Hoople’s version with Bowie’s guide vocal exists. A variant of this; Bowie’s vocal on the verses with Ian Hunter’s on the chorus, was released on the 2006 reissue of All the Young Dudes.
Bowie’s own studio version, recorded in December 1972 during his Aladdin Sane sessions went unreleased until 1995, in mono on the album RarestOneBowie. Bowie also used the music of ‘Dudes’ played backward in his song ‘Move On’ on his album Lodger in 1979.
Bowie then produced Mott’s album titled All The Young Dudes, recorded from May – July at Olympic and Trident studios in 1972 and released on September 8. The now famous cover concept and art direction was by Mick Rock. George Underwood tinted a vintage illustration – a cover of the Saturday Evening Post that Mick Rock had intended for the cover. The original drawing was from an ad for men’s suits in 1917.  The old English typeface came from the Society Brand Clothes logo. 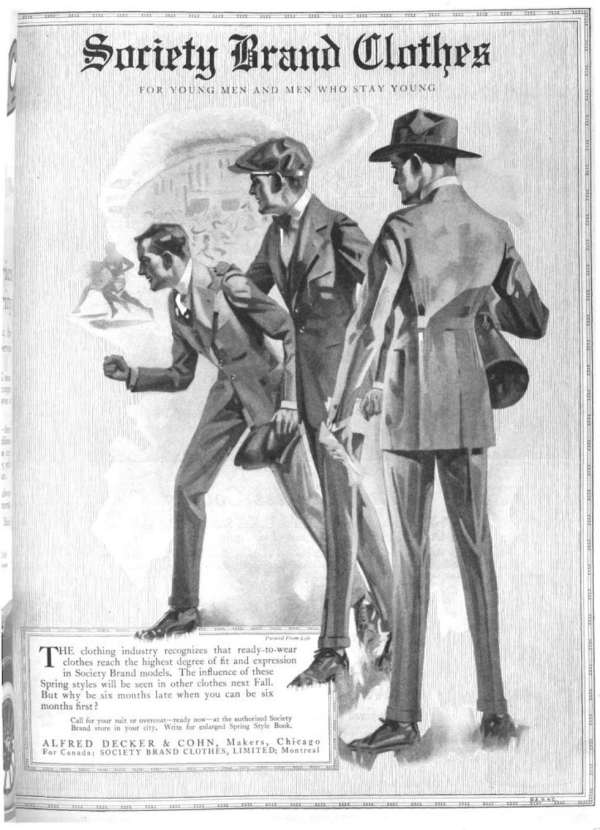 Mick Rock had originally submitted a photo of a young kid posing with a guitar. Here is the story of how they located the kid years later… 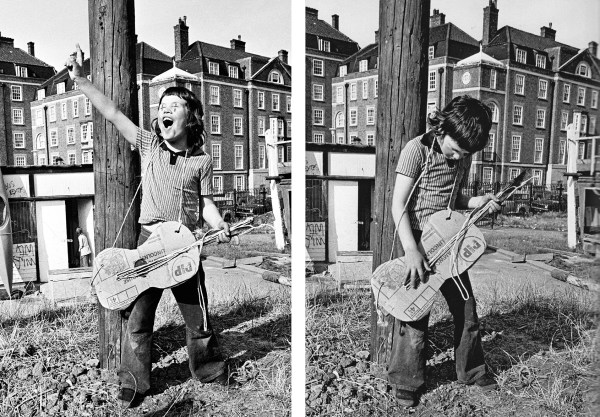 The following album simply titled Mott contained a song called ‘Hymn For the Dudes’ the moniker by which their own fans came to be fondly known.
Mott The Hoople bid their fans farewell with a lone single in October 1974 after a final album called The Hoople. ‘Saturday Gigs’ was their final anthem – a love letter to their fans chronicling the band’s history from the 1969 Roundhouse gigs to their week-long 1974 Broadway engagement in NYC (with Queen as opening act) and their fizzled out European tour that same year. At the end of every Def Leppard concert, Joe Elliott tells the cheering crowd, “Don’t you ever forget us, and we’ll never forget you!” These words come from deep within Joe’s heart. They were the fade-out lyrics of his favorite band Mott The Hoople’s farewell single.
At Mott The Hoople’s reunion gigs at Hammersmith Odeon in 2009, the bittersweet finale was ‘Saturday Gigs’. The band poignantly put down their instruments at the song’s end, chanting the ‘goodbye’ coda acapella as the lights went down. Mott exited the stage, as the joyful yet tearful crowd carried on chanting ‘goo-ood byyye’, echoing through the hall. 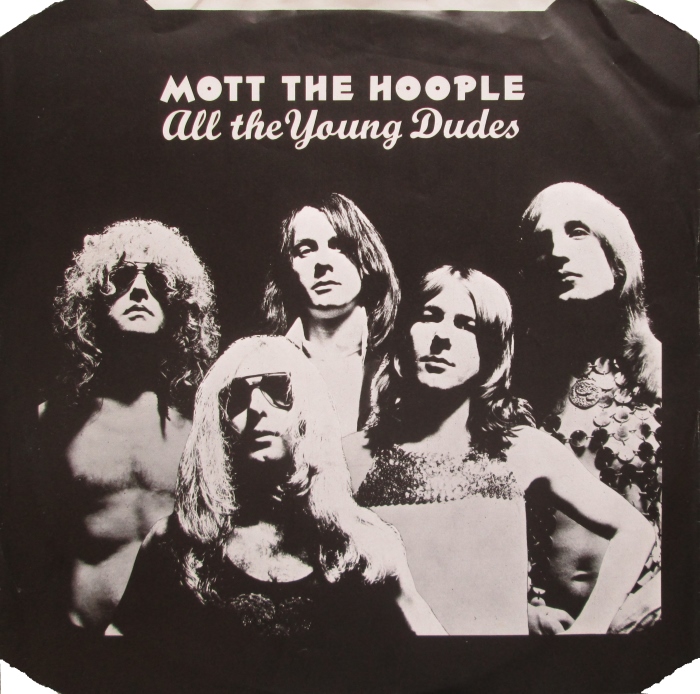 (An addendum by Mott’s Morgan Fisher):

Thanks for the article Madeline. Dudes is indeed a bit of a classic and on occasion I still play it live.
Buffin’s memory about Blue isn’t quite right. It was me that created a spoof recording, with my synths sounding like an old 78rpm record of an orchestra playing the Dudes melody. I had the band believing me for a few minutes!
Check it out here:
www.youtube.com/watch?v=kDTwxHS7XOM
Cheers!
Morgan
THE DUDE AND THE DANDY
by Madeline Bocaro © 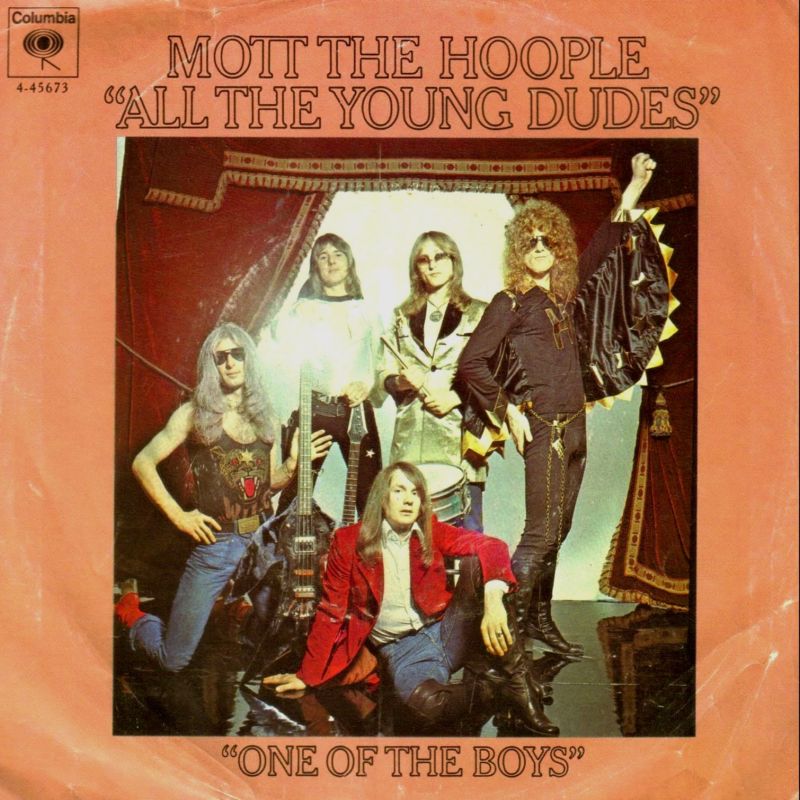 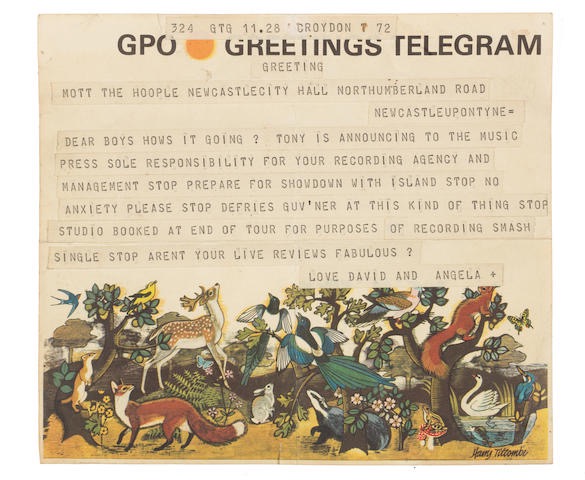 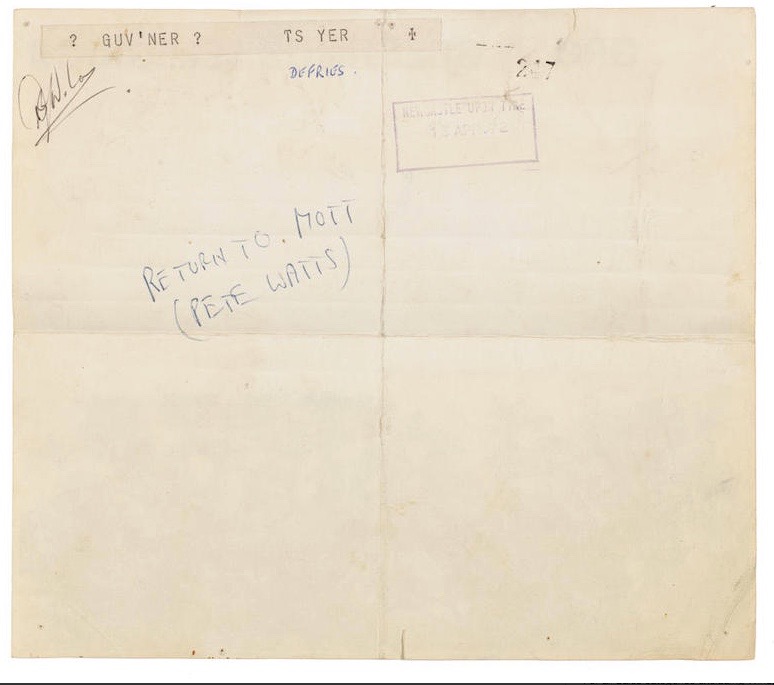 Bowie scribbled the idea for “Future Legend”
(the opening track of his album Diamond Dogs) as ‘Fugue for the Dudes. 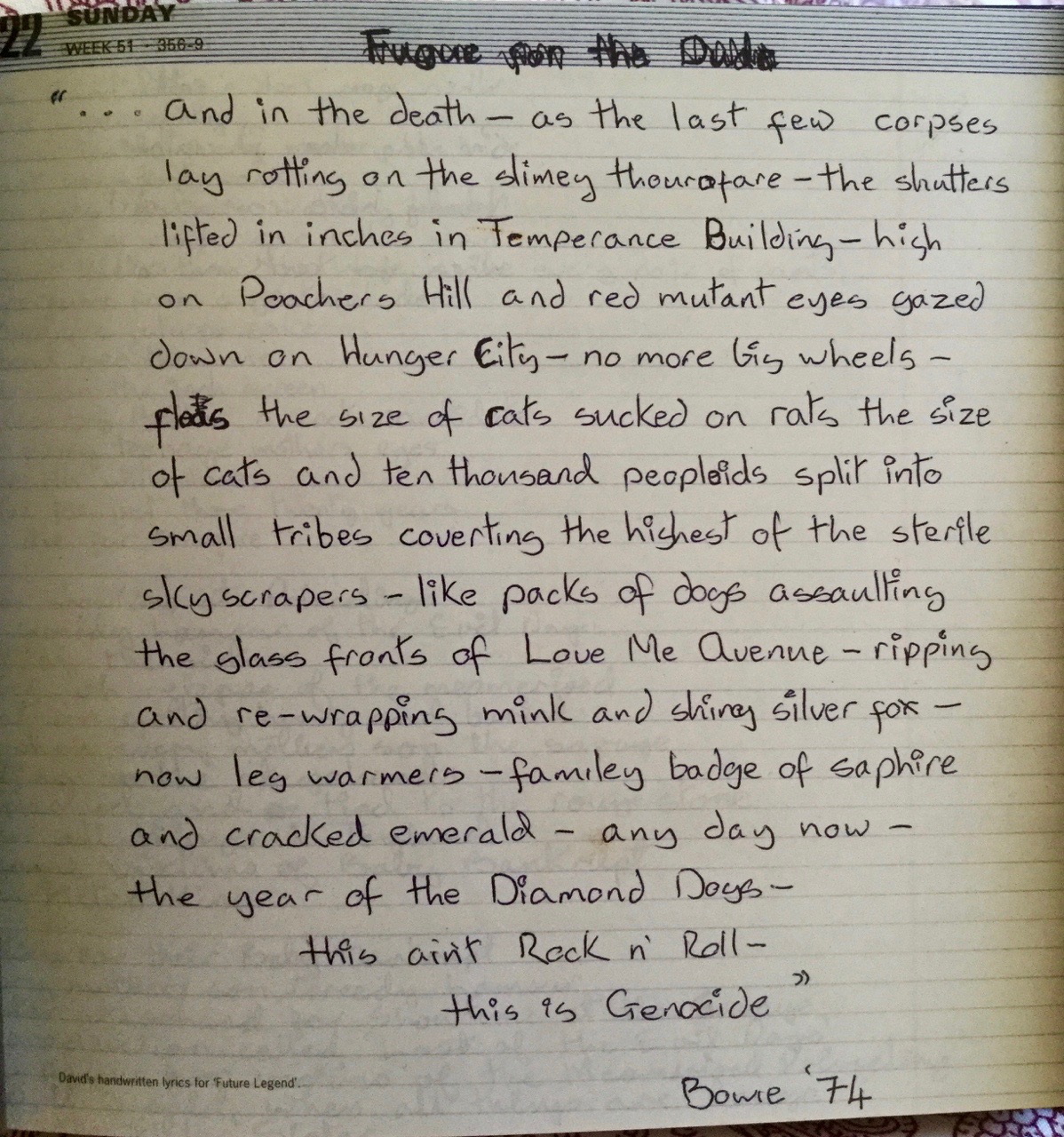