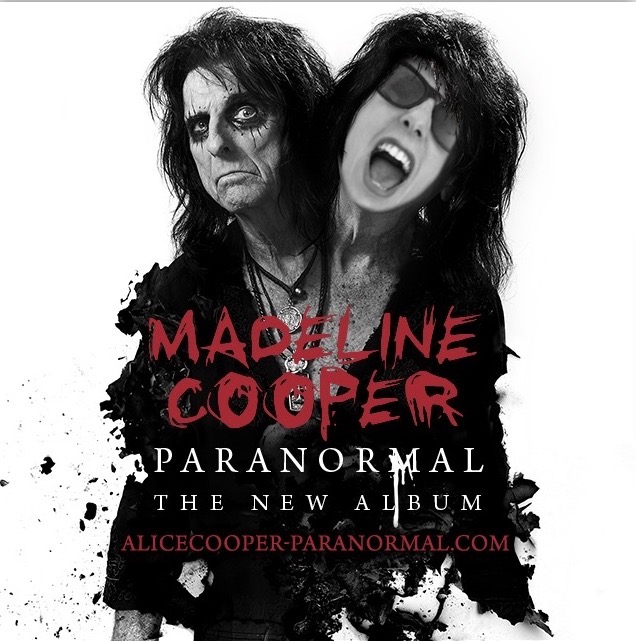 Two heads are certainly better than one! Alice Cooper’s sane and insane minds collide on Paranormal. I’m proud to join him on the album cover using the super cool app!

The title track begins with a dramatic effect reminiscent of ‘Hello Hooray’. It is at once creepy and comforting as a dead boyfriend disturbingly yet affectionately haunts his girlfriend. He rings her dead telephone and tells her that she is never alone. The guitar intro is ironically similar to the Easybeats’ uplifting song ‘Friday On My Mind’. However, the lyrics couldn’t be gloomier – on a blood-spattered lyric sheet! “I’m condemned to the long endless night / And I live in the absence of light.”

‘Fireball’ is classic Cooper. Brilliantly written by Dennis Dunaway (on bass) and Alice, it is set on a hot desert night. A nightmare about a red and gray fireball engulfing the earth turns out not to be a dream after all. The lyrics cinematically convey the horror of the townspeople upon their imminent demise in the silver rain. Musically, it’s the Romantics’ ‘Talking In Your Sleep’ on crack!  Great job Dennis!

On ‘Paranoic Personality’ we recognize the character Steven. I love his reversal of the words at the end; ‘Personoiac paranaltiy’.

The riff on ‘Fallen In Love’ has a Thin Lizzy vibe. It’s a really fun song that mocks that annoying TV commercial about old people with the tag line, “I’ve fallen and I can’t get up.”

The fuel-injected ‘Dynamite Road’ pays homage to cruising for girls in Alice’s hometown – Detroit Motor City! The car goes out of control, and Alice is the only one left alive. He’s not as upset at the demise of his band mates, as he is about his trashed Cadillac.

The killer ‘Rats’ features Dennis Dunaway and Neal Smith!!!  It’s very Punk, reminiscent of the wonderful but sadly true Jim Carroll song, ‘People Who Died’. I can’t get enough of this song!

A beautiful song, ‘The Sound of A’ was also co-written by Dunaway (also on bass). It has the feel of ‘I Love The Dead’ and some stunning guitar work. I wish there was another serious song like this one on the album.

‘You and All of Your Friends’ is another collaboration with Dennis, Neal, Steve and Michael. It has the exciting drum sound of ‘Elected’! This is such a tease, because the UK will enjoy a live reunion tour of the original band. Unfortunately, the USA will not. Oh well. At Alice’s live gigs, you can always expect a beheading, a hanging some monsters and other entertaining antics. Who else gives you that much bang for your buck?!

Granted, this is not a masterpiece on the level of the early AC group albums, but it is unmistakably by the same team (Alice and producer Bob Ezrin, who is also sometimes co-writer). Other featured players include ZZ Top’s Billy Gibbons, Deep Purple’s Roger Glover, and Larry Mullen of U2.  But who really cares about them? Why not record the entire album with the AC group, when they are actually playing on some of the songs?!