…and then as the sun rose we made love and that was Two Virgins.

John and Yoko’s first recording together in May 1968 (released in November) was an unprecedented sound collage. The ‘unfinished’ idea was inspired by Yoko Ono’s conceptual book of instructions to be completed in the mind –  Grapefruit (1964). John and Yoko believed that sound is in the mind of the listener, not in the grooves of a record. Lennon described the record; “Saying whatever you want it to say. It is just us expressing ourselves like a child does, you know, however he feels like then. What we’re saying is make your own music. This is Unfinished Music.”

“I have always believed in unfinished work. I got that from Schubert, you know, the ‘Unfinished Symphony’.” – y.o.

The album’s title arose from the couple’s feeling that they were “Two innocents, lost in a world gone mad.” After making the recording on their first night alone together, the pair consummated their relationship at dawn.

Two Virgins is the sound of two avant-garde artists falling in love, noodling around with tape loops and wordless vocals, experiencing a rebirth…on acid. The recordings were made in May 1968 in the attic at Kenwood, Lennon’s house in Weybridge, Surrey while John’s wife was away. The sounds include an amalgam of vocalizations, birdsong, sound effects, feedback, random musical instruments, nursery rhymes, music hall songs and novelty tunes.

“You’re listening to John and Yoko falling in love and having fun in the studio. Alone. It was just my dad and mom. You’re hearing that natural love explosion.”

In an amusing clip of playful outtakes, Yoko instructs John on the musical direction for the recording. She exuberantly laughs, as John jokingly counts-in the start of her timeless wailing vocal, “With a one two, one two, one two three…”

Unfinished Music No.1: Two Virgins was released by Apple Records in the US in stereo on 11 November 1968 and in the UK in mono / stereo on 29 November 1968. The mono version was available only in the UK by mail order.

John and Yoko were the Adam and Eve of our generation. John took a bite of Yoko’s Apple upon their first meeting in London at Indica gallery in November 1966, two years prior to recording Two Virgins. When they shocked the world in their birthday suits on the album cover, all hell broke loose. In 1980, John continued to innocently proclaim, “Even before we made this record, I envisioned producing an album of (Yoko’s) and I could see this album cover of her being naked because her work was so pure. I couldn’t think of any other way of presenting her. It wasn’t a sensational idea or anything.”

“When we met, we were so involved with each other that we couldn’t see anybody around us. We were just looking at each other and sometimes noticed that people were around us. We didn’t have time or space to consider what we looked like to others. We were really in a dream.”

In late October ‘68, for the album’s cover art, John took a series of nude photos of himself with Yoko using a time-delay camera in Ringo Starr’s basement a 34 Montagu Square. Lennon: “It just seemed natural for us. We’re all naked really.” On the front cover John and Yoko face the camera naked. (Yoko was pregnant at the time – she lost the baby). The back cover shows the couple from behind.

“He took that Two Virgins photo with a timer and cleared everyone out of the room so we could do it in secret. It was so funny because the whole world would eventually see it anyway.”

Paul McCartney contributed a quote for the back cover of the album’s UK pressing: “When two great Saints meet, it is a humbling experience. The long battles to prove he was a Saint.” Bible quotations from Genesis Chapter 2 (chosen by the Beatles’ press officer Derek Taylor) were used on the back of the brown covering which hid the couple’s backsides.

“The picture was to prove that we are not a couple of demented freaks, that we are not deformed in any way and that our minds are healthy. If we can make society accept these kinds of things without offence, without sniggering, then we shall be achieving our purpose.” – John Lennon

“What we did purposely is not have a pretty photograph; not have it lighted so as we looked sexy or good. There were a couple of other takes from that session where we looked rather nice, hid the little bits that aren’t that beautiful; we looked good. We used the straightest, most unflattering picture just to show that we were human.”

“It was in terms of multi-media, kind of the idea that we didn’t know whether the cover was the main music and the inside was like the B side, you know?”

EMI pressed the record in Britain while the cover was printed by Technic and released on the Beatles label, Apple Records. Apple scruffs (Beatles fans) were hired to insert the vinyl into the covers in the basement of Apple’s office at 3 Savile Row.  EMI refused to distribute the album in the UK, so it was distributed instead by Track Records. The nude cover photo was hidden with a brown paper sleeve. Two Virgins did not chart in the UK. Only 5,000 British copies were pressed. Approximately 100 (very rare) copies of the mono edition still exist after John nixed the idea, preferring the stereo mix.

Did you and John have a good laugh when the record label released Two Virgins with a paper bag over it?

We thought it was like the next step of our participatory performance art. 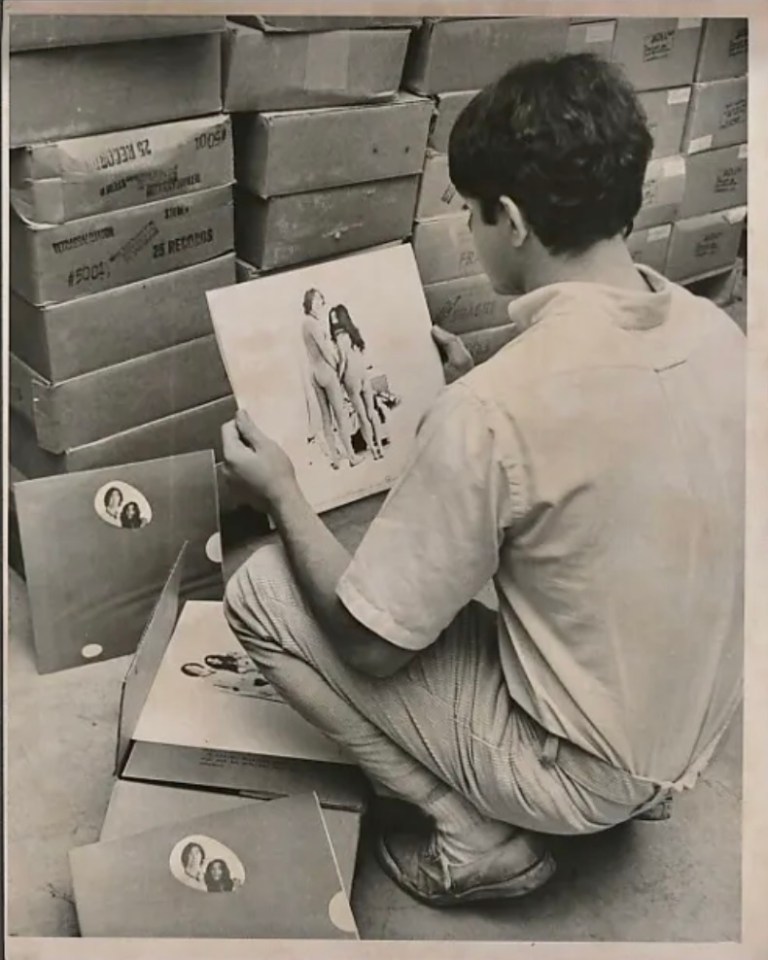 John’s idea for a naked album cover originated in 1967 while he was in India with the Beatles. John stated in a January 1969 interview during the Let It Be sessions at Twickenham studios, that he received tapes from Yoko of her voice modulations. He intended to put out an album of her works. Based on the childlike simplicity and innocence of the instructions in her book Grapefruit, his concept for her album cover was to have her pictured naked natural – just as her work is.  He sent Yoko a letter from India with his concept for her album cover,  drawing of her naked on a huge glass ball.

The album was first released on Tetragrammaton Records in the USA, a short-lived label founded in 1967 by Bill Cosby and his then manager Roy Silver. (Ironically, the definition of Tetragrammaton is “The unspeakable four-letter biblical name of the God of Israel.”)

Two Virgins reached No. 124 in the USA (25,000 sold) although the cover was regarded obscene by authorities. The records were impounded in many states (including 30,000 copies in New Jersey in January 1969).

If not for the restrictions in availability due to censorship of the cover and unreported sales, Two Virgins would have certainly risen much higher in the charts. The album’s back cover art was featured on Rolling Stone’s one-year anniversary cover (doubling sales) with another Bible quotation: “And they were both naked, the man and his wife, and were not ashamed.”

The avant-garde sound collage concept of Two Virgins crept into John’s work on The Beatles (white album) with ‘Revolution 9’. Two more ‘Unfinished Music’ albums by John & Yoko followed; Life with the Lions and (after their marriage in 1969) Wedding Album.

Unfinished: “I thought that there might be some people who needed something more than painting, poetry and music, something I called an additional act that you needed in life.”

Two Virgins was reissued on LP, CD, and digitally by Secretly Canadian/Chimera on the anniversary of its American release,  November 11, 2016 with bonus tracks and rare photos.

“I’m listening to a very special, precious moment to my parents. They influenced each other. It means a great deal to me, it’s very special. After all, they’re my parents. Up to that point, my dad hadn’t done anything but rock ‘n’ roll and pop music, so getting free from the boundaries of Western music was a great stimulus to him. I understand that very well. My mom urged my dad to experiment with avant garde, and he was an inspiration to her too. My dad learnt how far he could go in his freedom to express himself, and she learnt how to do recording. My dad had been wanting to experiment since his days with the Beatles. In that sense, my mom wasn’t only the trigger for him, but she also was a break-through to him to a world of new ideas and expressions.”

Yoko Ono’s Film No. 5, also titled Two Virgins was made at Kenwood in June 1968 – one month after recording the album. John and Yoko’s smiling celluloid faces are superimposed against the sky, twirling and uncannily merging perfectly into one.

Rare promotional sculptures of John and Yoko posing for the cover of Two Virgins were produced. One can be seen atop their piano in the photo below. Kate Bush owned one made in Perspex and plastic . She donated it to a charity auction in November 2010. 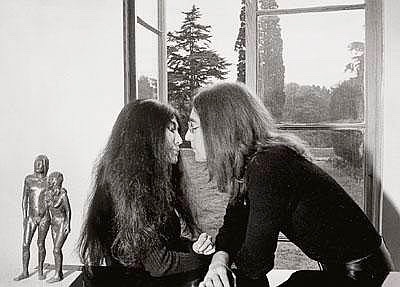 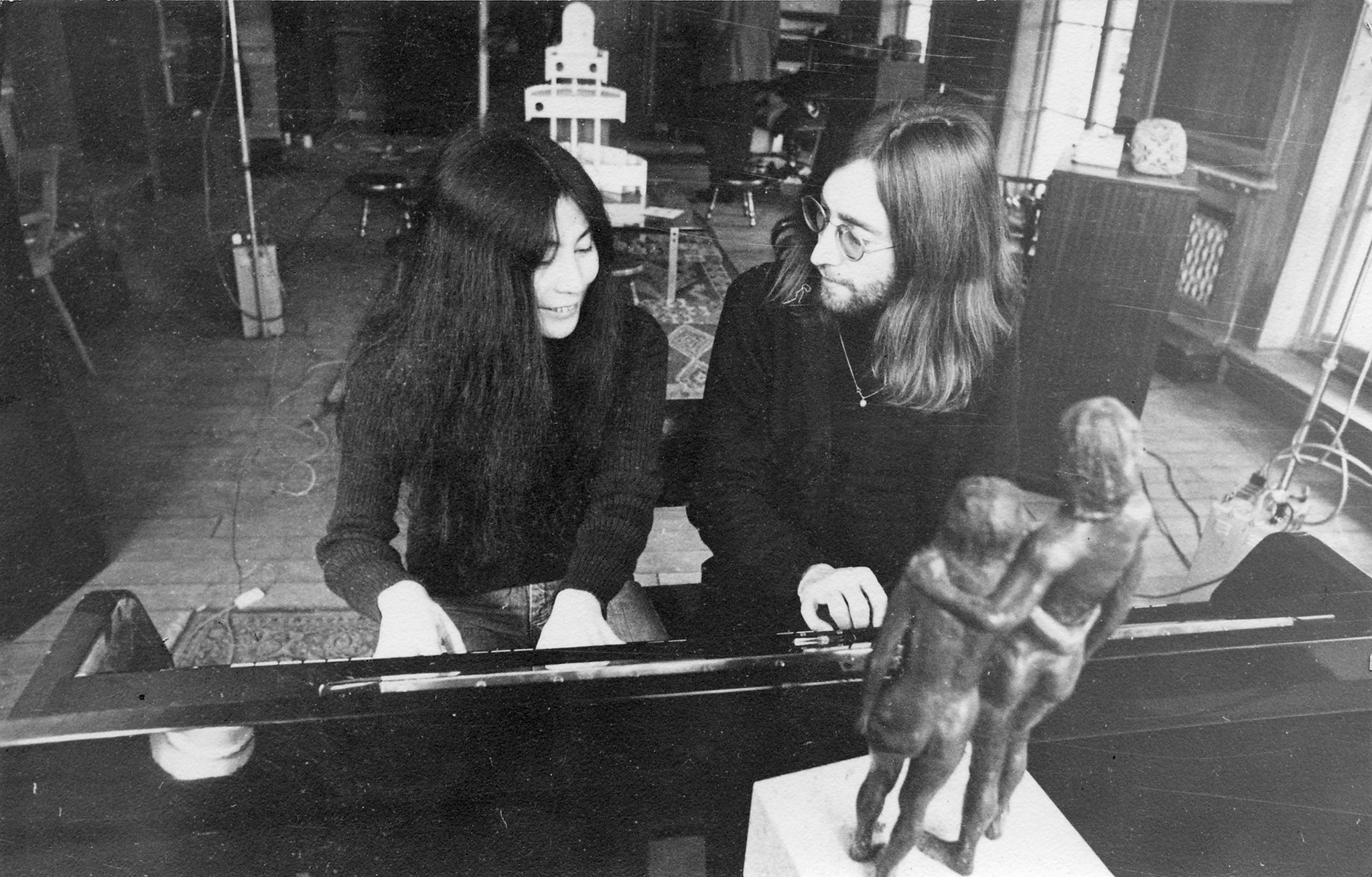 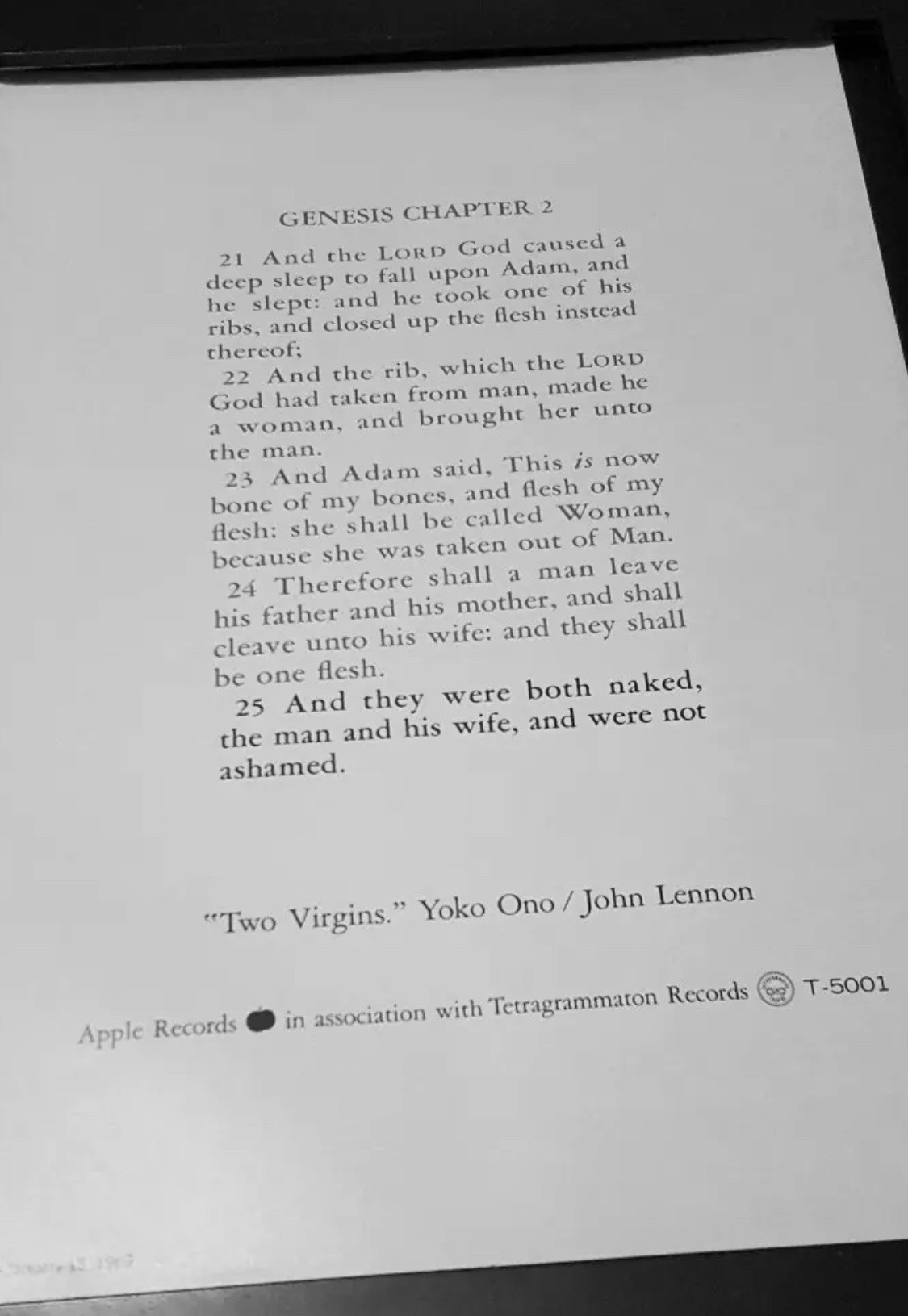 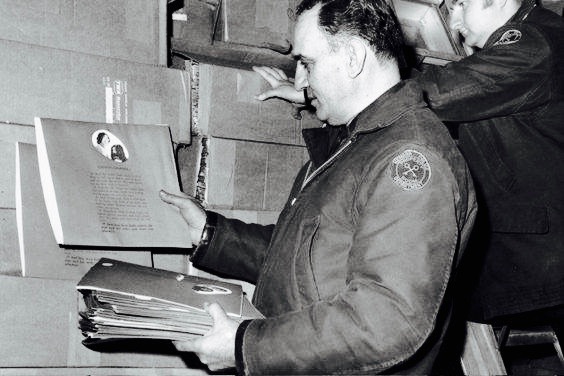 over his first album with Yoko Ono: 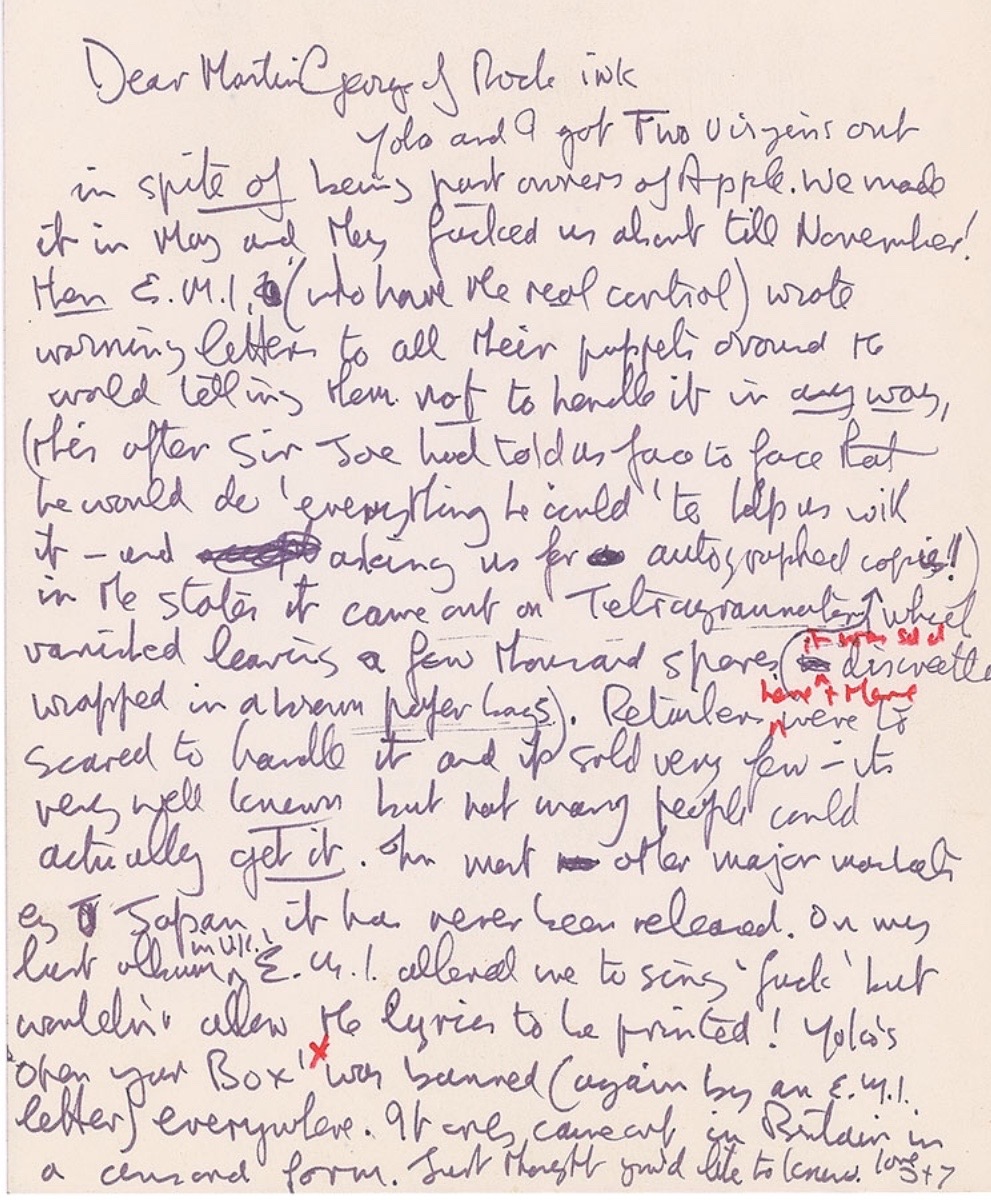 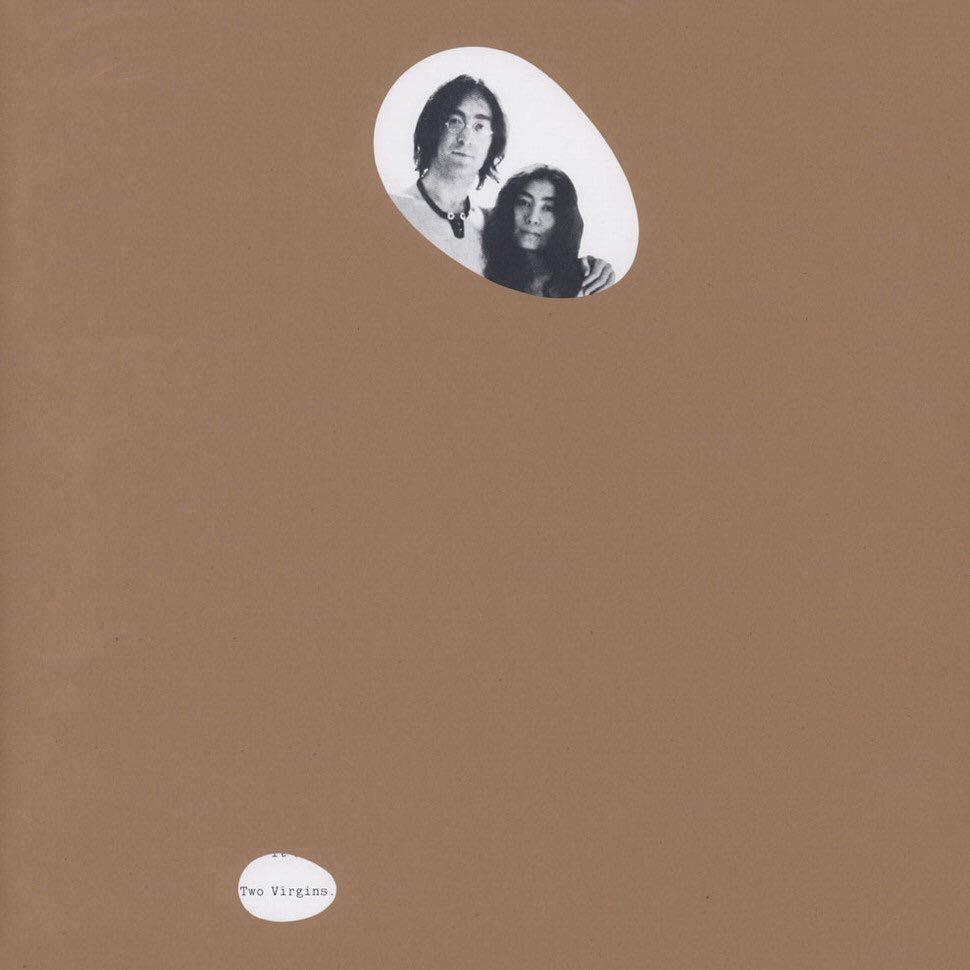 © Madeline Bocaro 2018. No part of this text may be copied, photocopied, reproduced, translated, re-blogged or reduced to any electronic medium or machine-readable form, in whole or in part, without prior written consent  Any other reproduction in any form without permission is prohibited. All of the text written by Madeline Bocaro on this site is protected by United States copyright law and may not be reproduced, distributed, transmitted, displayed, published or broadcast without prior written permission.

This story is an excerpt from my book…