They were like brothers – brothers to each other – and crazy, loveable big brothers to legions of rock n’ roll kids. It was 1976. Coming out of the Glam era and into oblivion, there was nothing on the horizon for discerning kids in a desolate world of prog-rock, bordering on Disco. The New York Dolls were silenced by their own outrage. The Sex Pistols were yet to be unleashed in England – anarchy was bubbling underground in a parallel universe, waiting for a kick-start. In New York we were left staring in the darkness at absolutely nothing. All dressed up with nowhere to go…

Then, just as if they heard our cries of despair – up from the subways of Queens, New York (not so far away) came a gangly gang of four guys wearing leather jackets and sneakers who would bring back the fun in rock n’ roll, and blast the future wide open! They certainly weren’t pretty or particularly talented, but they had a certain weird charm! They showed us that we could take over. We didn’t need heroes or idols – we had the power to do it ourselves! The Ramones were a band of approachable big kids…for the kids. They actually spoke to us and were happy to see us. We’d hang out with them at Trash & Vaudeville and all over Greenwich Village.

We thought we needed more from rock n’ roll, but couldn’t articulate it. The Ramones said it quite eloquently, “Hey Ho – Let’s Go!” That was it! That’s what we were pining for – simplicity! As it turned out, we actually wanted LESS! Something honest and genuine in an era of untouchable mega acts with their endless guitar solos and keyboard excursions to nowhere. CBGB’s – the Cavern of our time – gave the Ramones a home in New York City, where they spearheaded a whole new music scene. Everyone in New York knew that this was the world’s best-kept secret, just about to be told, and for now they were all ours! We could see them every week, packed shoulder to shoulder, and our heads spun around at full speed. When we got home, our heads were screwed on backwards, and we never felt better!

The Ramones were loud, fast, simple and purely original! Each two-minute three-chord song was like a machine gun blast. They’d play 20-minute sets, non-stop (except for arguments about which song to play next!) Joey’s voice just got better and better. At first they were clumsy – an amusing spectacle, but soon they were ready for blastoff. We saw them at the launch pad, and now they are eons away with their tail blazing light across the sky. Johnny and Dee Dee’s virtuosity is apparent in every photograph – their speedy strumming hands are always a blur. The journalists were confused, yet passionate. Richard Hell told this charming story. ‘Dee Dee explained the songs… and

It was as if Dr. Frankenstein had created mutant Beatles clones with a colossal lightning bolt, adding far more power, angst and fervor. People were scared of the Ramones as if they were monsters, yet they had heart and soul and only wanted to be loved. Their heads were too big and their jackets too small – just like the poor monster immortalized in the New York Dolls song “Frankenstein”!

As ‘brothers’, the Ramones took one surname and united for life…for the cause. They at first intimidated, then captivated the Clash and the Sex Pistols with their live UK debut at the Roundhouse on July 4, 1976. Joe Strummer admitted that the Clash were apprehensive about being good enough to play live, but the Ramones told him, ‘Wait until you hear us! We stink!’ They spun the Roundhouse into a frenzy, and Punk got the kick-start it needed.

Although Johnny, the group’s steadfast commander kept the ball rolling for years, the Ramones eventually came apart like most dysfunctional families, yet they persevered for some resolute, irreverent reason…probably a higher calling. Their records didn’t sell millions, but they survived financially and instinctively on their sure-fire gigs, and influenced innumerable other bands. Drummers came and went, and came again (Tommy finally returned). C-Jay replaced Dee Dee on bass for a while, but throughout, Joey and Johnny kept plugging away although they later despised each other (ever since Johnny married Joey’s girlfriend). It was their mission to see this thing through, and they did – for 2,263 gigs, 21 albums and 22 years. Their final show was in August of 1996 at L.A.’s Palace. Their earthy mission was then complete. Tommy Ramone wrote in the liner notes to the Hey Ho Let’s Go! compilation, “This is art. Sometimes it doesn’t sell at first. Sometimes it takes awhile for the world to catch on.”

The Ramones were inducted into the Rock n’ Roll Hall of Fame in 2002, a year after Joey’s death, none of his bandmates acknowledged him. Tommy said, “The Ramones meant everything to Joey.” Dee Dee humourously congratulated and thanked himself, Johnny thanked President Bush and America. But our dear Joey is to be thanked above all for his loyalty and sincerity, his sensitivity, his resolve and commitment to rock n’ roll, and for all the fun and precious memories he gave us. (And for all the rock nights he hosted in New York after the Ramones ended.) Joey so much embodied New York City that he was like a walking sky-scraper. Now he is a part of the city forever, with a street named Joey Ramone Place on the corner of East 2nd St. and the Bowery – right near CBGB!

The greatest gifts a band can give their fans are devotion, empowerment and a good laugh. The Ramones gave us all these things. The pure spirit of the Ramones will live forever in the hearts of rock kids, young and old. It’s strange – we still have Chuck Berry, Jerry Lee Lewis & Little Richard, but Joey (2001), Dee Dee (2002) Johnny (2004), and Tommy (2014) all left us within 15 years. They’re probably all beating each other up in heaven right now!

Thank you Joey, Johnny Dee Dee and Tommy for all the joy you’ve given us, and mostly for resurrecting Rock N’ Roll! In April 2014, their debut album quietly went gold, without fanfare. A quiet epitaph to a noisy bunch of guys!

And this is what Lou Reed said when Danny Fields played him a tape of the Ramones in November 1975. “They’re crazy!… Without a doubt the most fantastic thing you’ve ever played me bar none. I mean, it makes everybody look so —- and wimpy, Patti Smith and me included,” he said. “Everybody else looks like they’re really old-fashioned. That’s rock ’n’ roll! They really hit where it hurts. They are everything everybody worried about — every parent in America would freeze in their tracks if they heard this stuff…Their worst dreams come true!” 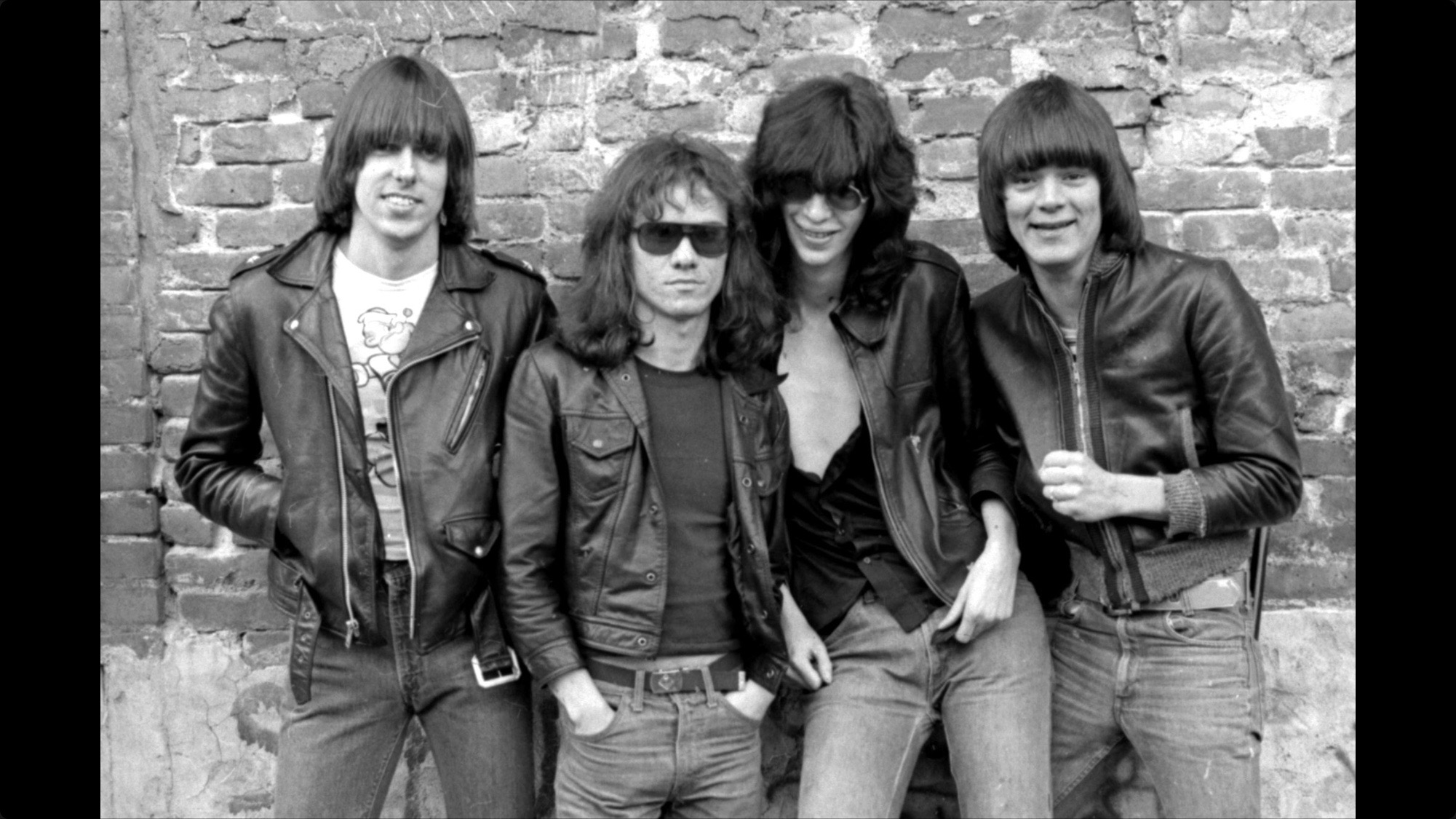 2 thoughts on “I JUST WANNA SAY THANK YOU…TO THE RAMONES!  ”