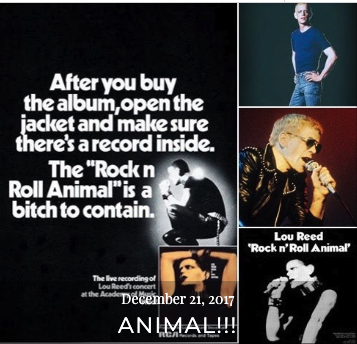 I still have my original orange label RCA Dynaflex!! And the promo poster!
A remastered version was released on CD in 2000. It featured two tracks not included on the original LP or 1990 CD release.
More of the same concert (consisting mostly of Velvet Underground songs) was released in 1975 as Lou Reed Live (combining the remastered Rock ‘n’ Roll Animal and Lou Reed Live the entire show exists, in a different order than the original concert).

The magic on this incredible album comes from the guitars of Dick Wagner and Steve Hunter. Hunter was a member of the band Detroit – their 1971 cover of the Velvet Underground song “Rock N’ Roll” was Lou’s favorite version, inspiring him to perform it in a similar arrangement at this live gig.

Steve and Dick played on Lou’s previous solo album Berlin, and both later joined the 2nd incarnation of the Alice Cooper group, for the album Welcome to My Nightmare which also features other R&R Animal band members Finnish drummer Pentti Glan and Prakash John (bass).

The stereo mix puts guitarist Dick Wagner on the right channel, and Steve Hunter on the left; this arrangement is reversed on Lou Reed Live.

xxx
Dennis Katz tells the incredible story of the how he mixed the album in this interview:
LOU REED: FREEING THE ROCK & ROLL ANIMAL
Jan. 23, 2019, Please Kill Me
The live concert that we decided to record was actually two back-to-back concerts at Howard Stein’s Academy of Music on 14th Street and Irving Place in Manhattan, on Friday, December 21, 1973. The band had rehearsed long enough on the road to keep the music fresh yet not too long to let it get stale. We hired the Record Plant remote, miked the band, ran the wires, did the sound check and were ready to go. Lou, as always, was the unknown factor. His performance depended not on any sense of professionalism but on whatever his mood was at the time, natural or artificially induced. Thankfully, in this case, it wouldn’t make too much difference. The band was that good.With his skinny amphetamine physique, newly close-cropped dyed hair, leather jacket, and basically looking like a Hitler youth who just emerged after twenty-eight years in a Berlin bomb shelter, Lou was about to take the stage after the Hunter/Wagner overture and begin his classic “Sweet Jane”. Forget praying that Lou would sing in tune that night – I would have been happy if he came somewhere close to a melody. But he did, the band was terrific and the night a success.
When it was time for post-production, thankfully, Lou was still on tour so I was able to mix the album without the artist in attendance, a producer’s dream, and especially this artist in particular, who was just starting his descent into amphetamine-induced psychoses. He would take speed for a month or two and then clean out his system for another couple of weeks. This was when he was the most difficult to be around, not when he was high, but when he was in remission. This was when you did not answer the phone if Lou called. This was when I had to take two aspirin every time I had to speak with him. Maybe, I thought, being a musician in a band was not so bad after all.
RCA had a union rule, that if you were an RCA artist, you had to use an RCA engineer. The way around this was to record outside the country. Rock ’n’ Roll Animal was recorded in New York so I had to use a staff engineer, but I lucked out with Gus Mossler who, with his short hair and Archie Bunker-like demeanor, turned out to be a treasure. I would use Gus for the mix as well. We ran into only one problem: It’s usually wise to record the audience track separately, in stereo on two tracks, which we thought we had done until we listened to the playback and found that one track was missing, probably due to a faulty cable at the venue. It was still possible to “fly” an audience track in, so Gus came up with the idea of using someone else’s applause from the RCA vaults. So Gus went to the vaults, came back and asked if I minded borrowing the audience track from a John Denver concert. Mind? Could I have been any happier? Be still my beating heart! It was an absolutely brilliant idea.As the album fades, I found that on the one original audience track, someone yelled out “Lou Reed sucks!” from the back of the Academy of Music. I kept it on the last part of the fade, and when I told Lou, he commented that he thought it was best thing I had ever done.The real fun part was, like laugh tracks in sitcoms, you could play with the volume. Loud laughter can make a bad joke sound funny, loud applause can make a mediocre performance sound positively virtuosic, so halfway through “Sweet Jane,” when the band is still playing the overture, and Lou begins his entry onstage, we beefed up the applause. We turned up the volume so that it sounded as if the Pope just entered Vatican Square. It was beautiful, and that’s the way it stands to this day.
I still have the original promo poster! 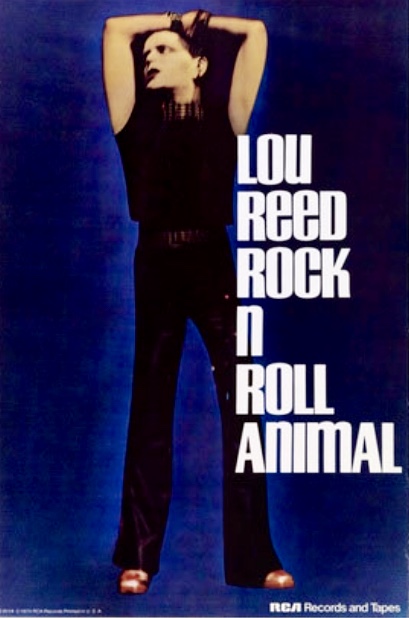 © Madeline Bocaro 2017. No part of these written materials may be copied, photocopied, reproduced, translated or reduced to any electronic medium or machine-readable form, in whole or in part, without the  prior written consent of Madeline Bocaro. Any other reproduction in any form without permission is prohibited. All materials contained on this site are protected by United States copyright law and may not be reproduced, distributed, transmitted, displayed, published or broadcast without prior written permission of Madeline Bocaro.