Just found my initial impressions of the ★ video!
I was making fun of old Bowie again!
When I first heard the title, Blackstar, I thought this might be his new R&B album.

Bowie always wanted to be a BLACK STAR!

I like how the new graphics spell out ‘Bowie’ in star bits!

The music sounds like Bowie melted down billions of Diamond Dogs and ‘Heroes’ vinyl LPs and sent them into space. Then aliens found the molten lump, devised a warped needle to play it with, and found that it also produced video images. The aliens got the message, but Earthlings still cannot comprehend it. Maybe it’s really just another moonage daydream.

Once again, he is f★ing with the fabric of time!

Wish I had heard this for the first time without visuals. Audio and video at once = too much information! First impressions: Jazz in Space. Dark planets with de Chirico landscapes, girls with tails, people doing that twitchy dance from the ‘Fashion’ video. Bowie resembling John Blaylock (in the latter half of The Hunger) as Chairman Mao wielding his Little Black Star Book. The voice of ‘Joe the Lion’ going on about executions with visions of crucifixion. The crucified resembling scarecrows. Ritualistic themes. ‘Boys Keep Swinging’ moves in a dusty attic.

Bowie’s ★video gets even stranger in the 2nd half when pale colors emerge like in a hellish Oz, with writhing scarecrows in a pastel wheat field.

The attic setting resembles the 1982 Kate Bush ‘Suspended In Gaffa’ video with its circular window backlighting. Not from the promo version, but this one with the puppets…

There is a nod to his son, (director Duncan Jones) –  the smiley face on the deceased Major Tom’s spacesuit, referencing his film Moon).

Bowie has been eerily prophetic with his visions of gangs and doom. Droogs, Diamond Dogs, Young Dudes carrying the news, (Billy rapped all night about a suicide, speed jive, don’t wanna stay alive when you’re 25…). His lyrics to ‘Fantastic Voyage’ have since crossed over into reality…

It’s a moving world, / but that’s no reason

It won’t be forgotten / ‘Cause we’ll never say anything nice again, will we?

And the wrong words make you listen / In this criminal world

Remember it’s true, loyalty is valuable / But our lives are valuable too

From the looks of the ★video, I hope it does not become our future reality!

(Bowie said it is about Isis). 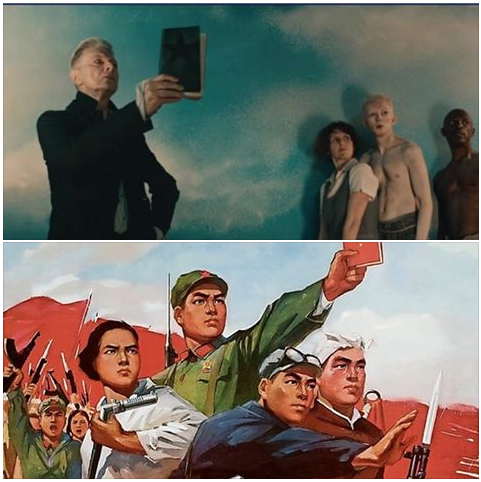 One thought on “BOWIE ★ VIDEO”