I am very happy to report that the Bowie archive has changed the attribution of the Grammy suit to its creator, Jan Girard!! Congratulations Jan!!

I AM PROUD TO SHARE MY NEW FRIEND JAN GIRARD’S AMAZING STORY!!!

© Jan Girard / Madeline Bocaro 2018. No part of this site may be reproduced in whole or in part in any manner without permission of the copyright owners. 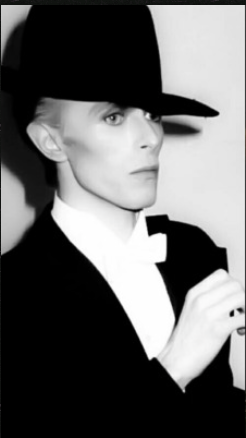 Jan is the creator of the gorgeous tuxedo that David Bowie wore at the 1975 Grammy Awards ceremony, mislabeled as a Freddie Burretti design at the David Bowie Is exhibition. We are working hard to this corrected, as Jan deserves proper credit.

(As mentioned in my story about the DAVID BOWIE IS exhibition – in Brooklyn through July 15, 2018):

Bowie’s 1975 Grammys suit (with the stunning classic black brimmed hat) is again incorrectly labeled as Burretti. It was thought to be by Ola Hudson, but it has been recently revealed that it was made by Jan Girard. Jan (who had outfitted Cherry Vanilla in sequined jumpsuits) was commissioned by Cherry to create a tuxedo for ‘a skinny friend’. The wide-lapelled jacket and a stripe down each pant leg set it apart from a normal tux. It was assumed that Freddie Buretti made the suit, however he and David had parted ways after a financial disagreement (according to Kevin Cann). Freddie soon went into exile, moving to Israel in 1977. His family listed him as a missing person, as he had vanished without a trace and had not been seen in ten years.

This is Jan’s story…

Many thanks for her kind permission to publish here.

Thanks also to Cherry Vanilla and Tony Zanetta

I went to see “DAVID BOWIE IS” at the Brooklyn Museum two weeks ago. It is a spectacular, fun, exhibit, and highly recommend it to everyone.

As you enter into the galleries, you are given earphones, so you have the extra-sensory pleasures of Bowie singing or talking to you as you move through the exhibits. As you do so, many things about the man come through crystal clear. He was a creative genius with strong ideas about what he wanted in every facet of his life. One continually sees a man who always welcomes collaboration with excitement and a generous spirit.

This was my experience of David Bowie, too.

In 1975, as an artist, seamstress and designer I was making airbrushed soft sculpture and had moved into a large Manhattan loft where I lived in the front and worked in a studio in the back.

Prior to that I had been making costumes for “Oui” Magazine and then two sequined bodysuits for Cherry Vanilla, who was then working as Bowie’s publicist.

Out of the blue, in 1975, Cherry called me and asked “Will you make a suit for a skinny friend of mine?” I said “Sure” without asking any more questions, and not knowing who would arrive.

A few days later, the freight elevator that led directly into my loft space living room opened, and David Bowie stepped out. I said,“ So you’re Cherry Vanilla’s skinny friend?”

He said “ Yes, and you’re the one who’s going to make me a tuxedo. I knew it had to be someone wonderful. It’s my first tuxedo.”

We talked about what he wanted. We settled on a beautiful black wool with wide satin lapels, and asked if he could have a satin stripe down the side of the pants, which I was happy to oblige.

Since I had only about a week to make the tuxedo, I asked if he had something he liked the fit of that could serve as a beginning—not to copy, but to utilize for sizing since our time was so limited

Once we got the tuxedo discussion out of the way, he asked to see what I was doing. He got totally into the airbrushing and soft sculpture, which were plants, flowers, sea life, and shells. We sat down like two old friends, getting stoned on a rainy afternoon and collaborating on a mutual fantasy. This was an airbrushed, soft sculptured, quilted room that he would love to have as his new living room. It was one of the most playful, inventive conversations I’ve ever had, with both of us throwing out ideas as fast as we could.

What a fantastic meeting! And who hires someone to make something for them and wants to find out about their other work? Only a marvelously generous and curious person who is extremely willing to give of himself.

That was only the beginning. A few days later he came back for the jacket fitting. I don’t know how many of you have ever seen the inner workings of a man’s tailored tuxedo jacket, but it’s not a pretty sight. It is the structure of it formed in canvas, horsehair, and padding, with big hand stitching. There is no face fabric on it at all, just the rough shell of the form.

David walked in for his first formal fitting with the in-progress suit jacket. I told him, “Oh, I’m so embarrassed to show it to you. It looks like a rag.”

He playfully waved me off. “Have you got a dressing room?” he asked.

“Sure” I said and sat down at the near end of my studio. The studio was about forty feet long, with an eight foot wide aisle all the way down between the work tables and sewing machines on either side.

At this point in the process, it’s all about how the suit jacket fits the body and how someone can move in it. And move he did!

Bowie came out of the dressing room and walked down the aisle between the sewing machines like a St. Laurent model showing off the latest creation on a raised runway. He turned around, walked back to me smiled and said, “See, it’s perfect.”

I clapped, cried, and laughed all at the same time. He had just given me the greatest gift one person could give another—trust, and complete understanding. His powers of visualization and imagination were totally intact. I believe that’s when I found out he would be wearing it to the Grammy’ s.

We saw each other one last time when he came by to try on the pants. I finished the tux and it was picked up for him.

I never saw him in the finished tuxedo until I watched the Grammys.

I have always treasured these memories of our surprising and inspiring collaboration. I am delighted that due to the support of Cherry Vanilla word is getting out about the true history of this piece–the only tuxedo I ever made, mine and Bowie’s first.

Dig David’s fey raised fist in a symbol of black solidarity (from the whitest man on the planet) as he announces the award for ‘Ze premier femme noir!’

Note the amazing nominees for Best Rhythm & Blues performance by a female artist; Aretha Franklin, Millie Jackson, Etta James, Tina Turner, Shirley Brown Ann Peebles and Thelma Houston! I doubt it if any of the other ladies would have been so condescending to the polite and elegant gentleman handing out the award.

(I love the close-up of John & Yoko in the audience!) 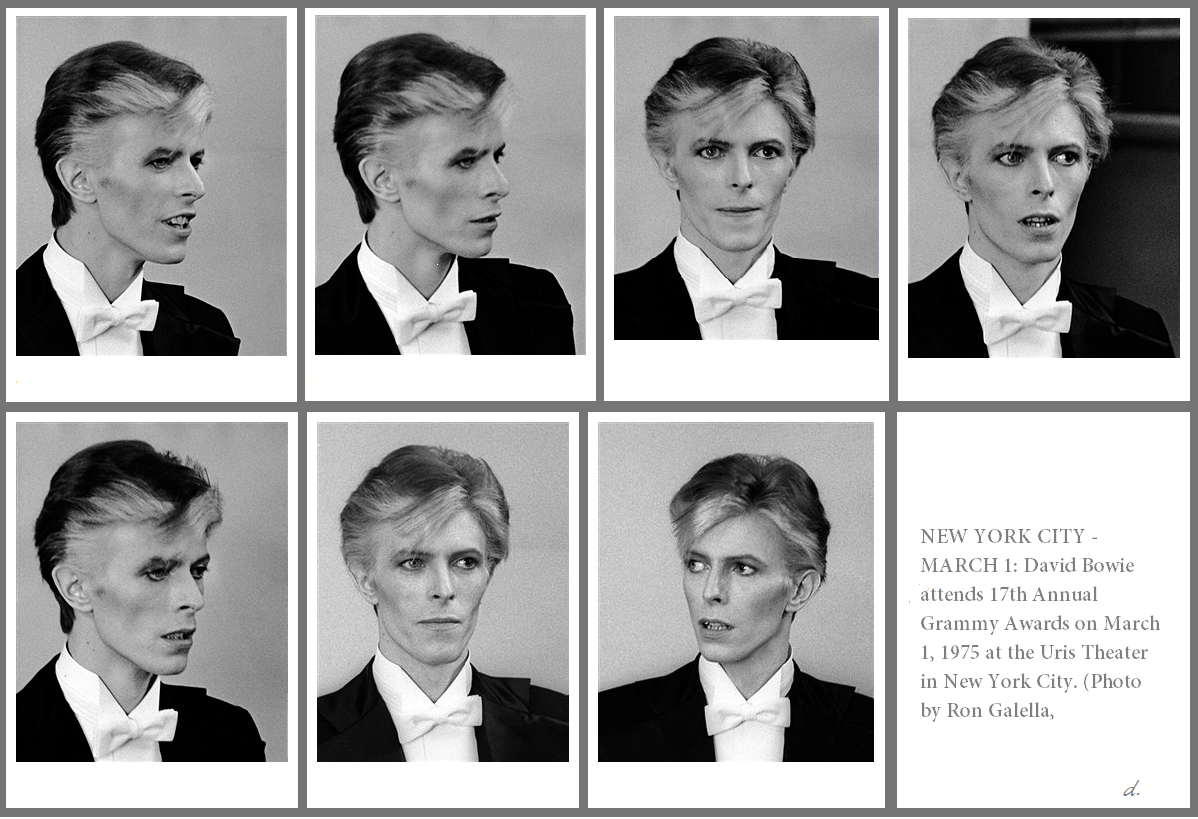 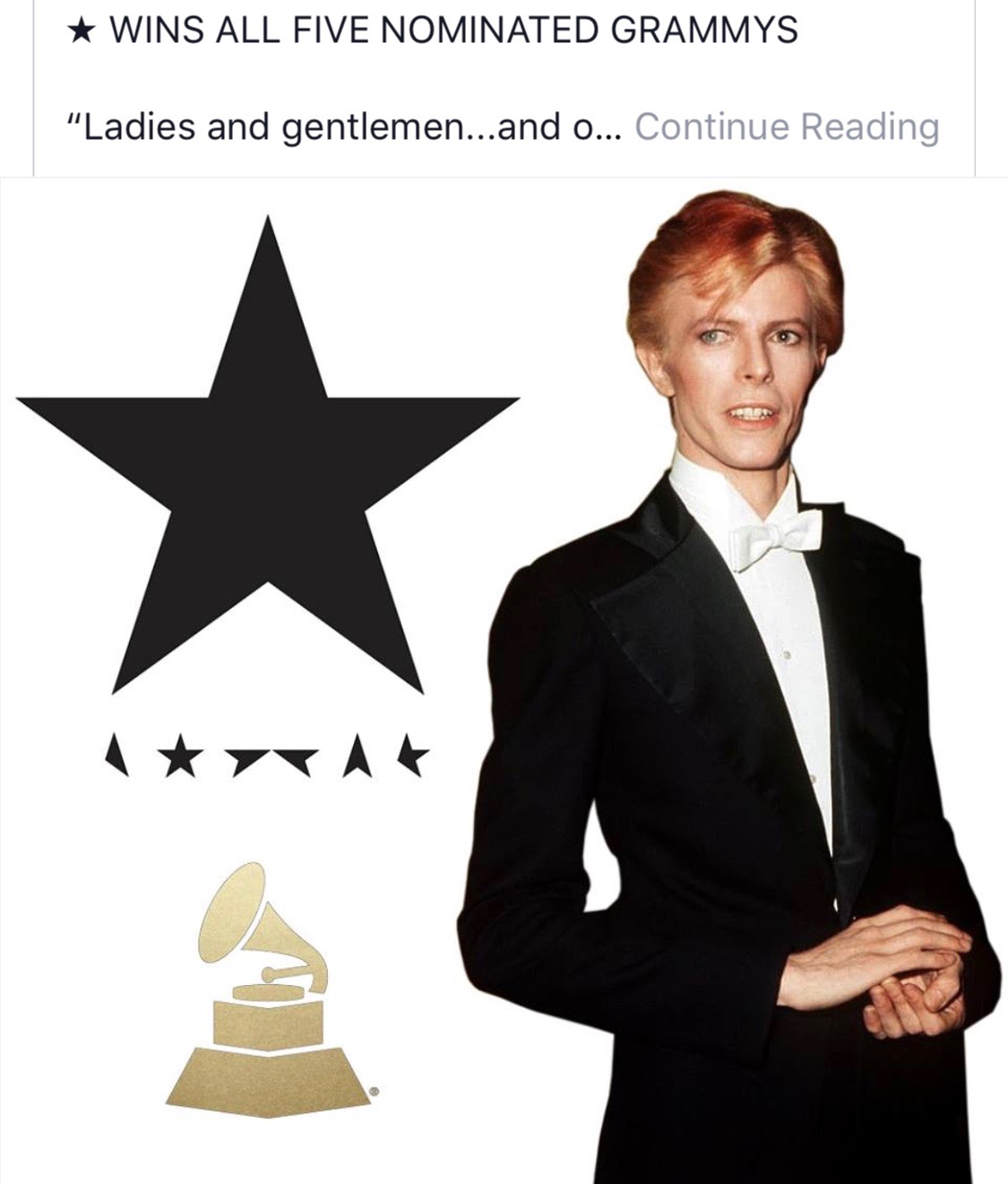 4 thoughts on “BOWIE SUITS UP FOR THE GRAMMYS – Jan Girard”