David Bowie’s first attempt at becoming a ‘Blackstar’ was his R&B phase, which rapidly overcame him in the midst of his doom-laden Diamond Dogs tour in 1974. In a sudden revelation, Bowie realized that he might actually be a black man in a white man’s body! David immediately dismantled his extremely expensive Hunger City tour set with its blood-dripping buildings and transformed into a Gouster*, donning a Puerto Rican style suit. He later took up residence in a Philadelphia’s Sigma Sound studios (‘home of Philly Soul’) to record his Young Americans album with a young Luther Vandross amongst the backing vocalists. The single ‘Fame’ was co-written by his favorite Beatle, John Lennon.

As always, Bowie’s finger was on the pulse of what would become

‘Fame’, David’s first American No. 1 single was composed by Bowie, John Lennon and Carlos Alomar based on a guitar riff from the song ‘Footstompin’ by doo wop group The Flares (1961). Bowie performed a cover of ‘Footstompin’ along with ‘Young Americans’ and ‘1984’ on the Dick Cavett show (December 4, 1974).

Alomar told Mojo magazine: “Lennon played acoustic guitar and we reversed it and that’s the suction sound you hear at the beginning… we put up big reverb upon David’s riff…”

‘Shame Shame Shame’ writer Shirley Robinson (whose career goes back to 1952) was half of the R&B duo Mickey & Sylvia whose hit ‘Love is Strange’ topped the charts in 1957. In 1972 Robinson wrote the song ‘Pillow Talk’ for (Reverend) Al Green, who rejected the song, citing his religious beliefs. Robinson had a No. 1 R&B hit with the song herself, under the name Sylvia. Her whispering, moaning, orgasmic vocals became the precursor to Donna Summer’s ‘Love to Love You Baby’ (produced by Giorgio Moroder), which spawned the electronic Eurodisco scene.

Shirley later founded the record label Sugar Hill which released the first ever Hip hop song in 1979, ‘Rapper’s Delight’ by The Sugar Hill Gang. This launched scratching, rap and breakdancing into the mainstream.

‘Fame’ was recorded at Electric Lady studios in New York city in January, 1975 – released July 25 on RCA records and produced by Harry Maslin. Bowie’s appreciation for his growing fame was at an all-time low, as he began a serious drug addiction that would last through the next few years.

Not long after presenting Aretha Franklin with a Grammy award, Bowie appeared on Soul Train. After an awkward interview with host Don Cornelius on the mostly African-American dance show, David mimed to ‘Fame’ and ‘Golden Years’ from his forthcoming album, Station to Station, written about better days with his wife Angie. ‘Golden Years’ was originally offered to Elvis Presley. On November 4, 1975, Bowie was the whitest man ever on Soul Train, which debuted in 1971. Only Elton John had beaten him to the spot. In a beautiful blue suit, with hair colored a million shades of orange, David was most likely the only mega-user of hairspray on the show as well.

“I’m very drunk in this” David Bowie told Russell Harty in 1975 referring to his Soul Train TV appearance. “I was very nervous, so I had a couple of drinks, which I never do and I really shouldn’t have. It’s lovely. It’s very funny.”

DAVID BOWIE: I spent quite a lot of time getting to know Lennon, and I do remember we went to a lot of bars together. We spent hours and hours discussing fame, and what you had to do to get it, to get there. If I’m honest it was his fame we were discussing, because he was so much more famous than anyone who had been before. I remember that Carlos and I were working on this riff, and I remember than it was John who started riffing on “Fame,” screaming at the top of his voice in the studio. He was screaming, I was writing the lyrics, and Carlos was crashing through the riff. It all came together so quickly and so brilliantly. It was an incredibly intoxicating time and I can’t quite believe that we didn’t try and write more things together, because just being around him was breathtaking. He had all this energy which I suppose I didn’t expect when I first met him.

AVA CHERRY: I was there the day David brought John Lennon into the studio. He actually wrote a diary entry that day where he says, “January 30th, introduced Ava to a Beatle.” We were going in that day to record “Fame,” and before the session David was freaking out because he was so nervous. He really admired John Lennon, and that day David was like a little kid. And then John comes in the door and John had those granny glasses on, right? And David looks and me and says, “He really does wear those granny glasses!” He really liked the fact that Lennon had the whole Lennon look. What you imagine John to be is exactly how he was: charming, funny, and they both hit it off immediately. They became really, really good friends. It was only me, Carlos, John, and David in the studio—and I think Geoffrey [MacCormack] might have been there. Yoko came and brought us some sushi and then she left. She was very sweet. I liked her. She was not how I imagined her and how the Beatles said she was. John was sitting there at one point with his twelve-string getting ready to play “Across the Universe,” and he looks up and says, “Are we having a good time?” We were all so happy that John Lennon was so relaxed. David was just over the moon. He drew David a caricature of himself. And David put it in this solid gold frame. He really loved it. I didn’t think “Fame” would turn out the way it did. I thought because John Lennon was on it that he was going to get lots of critical acclaim, but it was just a James Brown groove at one point.

A few weeks later, Bowie performed ‘Fame’ live on the Cher show (November 25) to a really cool mix of the backing track.

In 1976, the Godfather of Soul was influenced by the Thin Black Duke; James Brown released a note-for-note replication of ‘Fame’ called ‘Hot (I Need to Be Loved, Loved, Loved).’

Bowie also recorded a beautifully crooned version of Lennon’s (Beatles) song ‘Across the Universe’ for his Young Americans album.

* ‘Gouster’ refers to a dress code worn by African-American teens in the 1960s in Chicago, but its meaning for Bowie was an attitude of pride and hipness.

See my related story about the creation of Bowie’s Grammy Awards suit!
https://madelinex.com/2018/04/12/bowie-suits-up-for-the-grammys-jan-girard/ 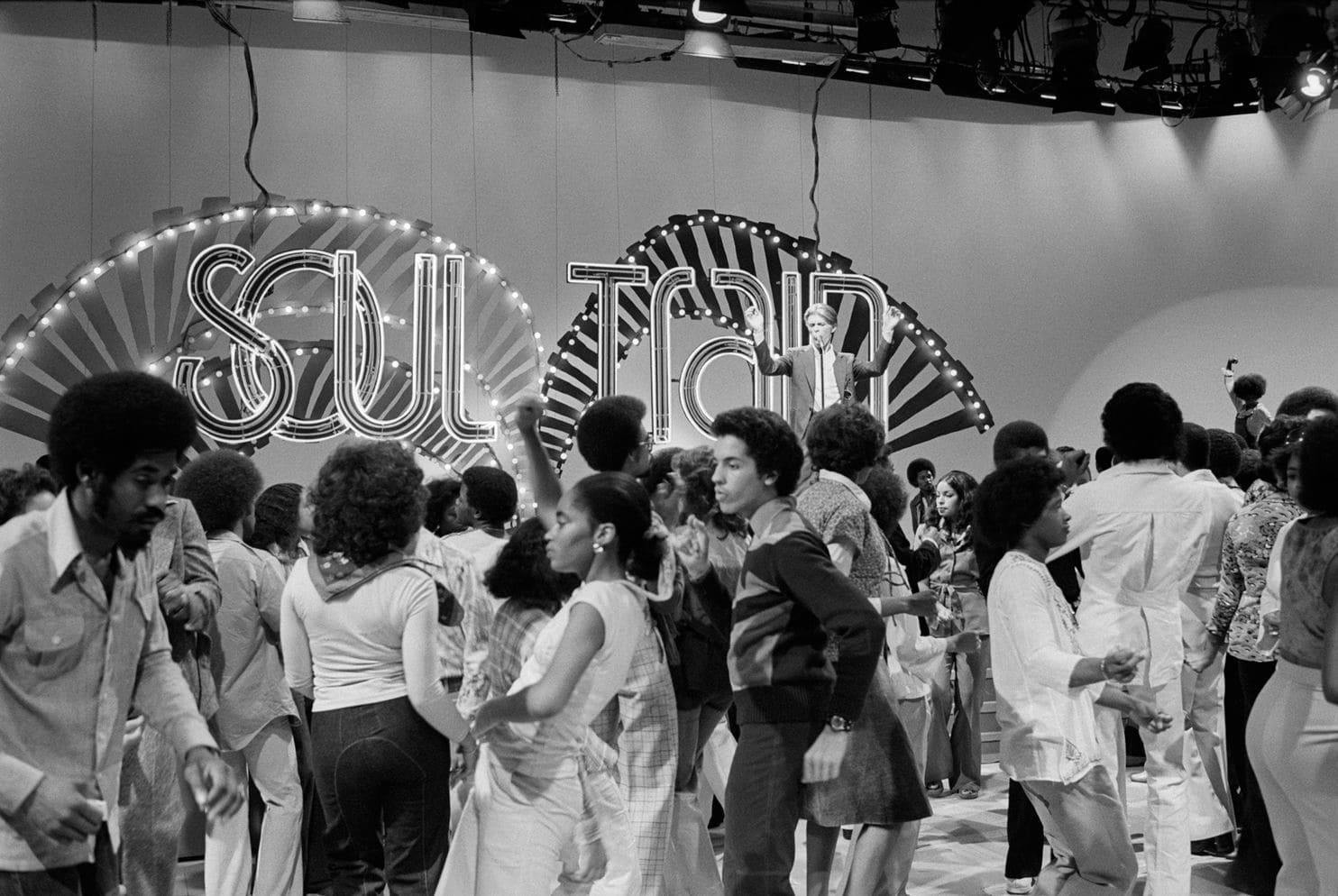 Here are Cher and Tina Turner rocking out to ‘Shame Shame, Shame’

7 thoughts on “DAVID BOWIE & JOHN LENNON Getting Funky with ‘Fame’”