The true, complete and insightful story of the extraordinary woman whom John Lennon loved. 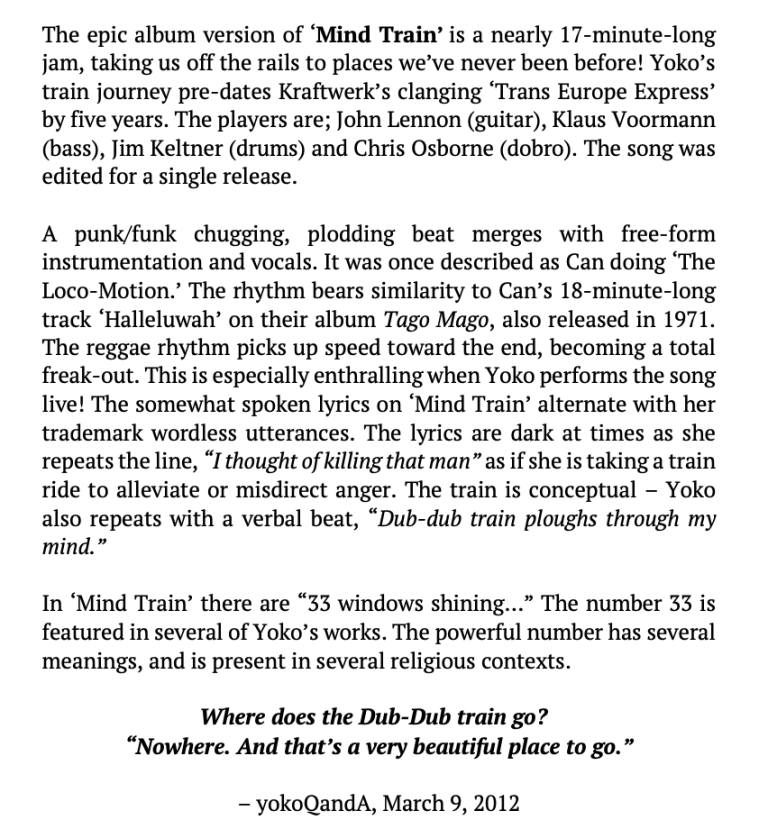 At her Concert for Japan (March 29, 2011) Yoko introduced the song with an anecdote. “‘Mind Train’ was about 16 minutes long. John insisted on playing it for an unnamed famous musician.” Yoko expressed her regret of having this person endure the whole 16 minutes. Hopefully, it was someone who was well deserving of the wrath of Yoko and wish that it could have been myself instead. After all, one man’s pain is another’s pleasure!

(I later realized that Yoko was referring to the time that she and John played ‘Mind Train’ for  Bob Dylan at the Isle Of Wight on 31 August 1969. Consider how preposterous and hilarious this is – that the prolific poet of rock ‘n’ roll politely listened to something so lyrically abstract and lengthy!! I have much more respect for Dylan now!)

Another recurring line is, “33 windows shining…”

In numerology, 33 symbolizes the highest spiritual conscious attainable by a human being. In astrology, the sun transitions into a new sign of the zodiac at the 33rd degree. The powerful number 33 is significant in all major religions. In the Bible, Jesus was 33 when he was crucified. Joseph was also 33 when he married the Virgin Mary. Christ in the Gospels accomplishes 33 miracles.

The number 33 has a special meaning in Buddhist religion. It relates to the 33 forms that Kannon can adopt to save humans from danger, and bring prosperity and happiness. In Buddhism, the number 33 connects the familiar world with a higher spiritual realm.

Krishna died at age 33. The Tibetan Book of the Dead has 33 heavens. In Chinese and Japanese Buddhism, the sacred goddess Kuan Yin assumes 33 appearances and undergoes 33 transformations in 33 holy places. She aids souls in reaching nirvana.

In Japan, 33 (“sanjuusan”) is meant to be an unlucky years for women according to Yakudoshi, a set of unlucky ages in Japan.

‘Mind Train’ was released as a single on January 20, 1972. It was a four-minute edit of the 16-minute album version from Yoko’s album Fly. The single was also released in a picture sleeve and features the special Yoko/Apple label on the A-Side and the sliced apple on the B-Side.

“This was one of those ad-lib songs. I kept going on and on. John kept going on and on, too. So I didn’t stop. The next day, we listened to the tape in our hotel room. John loved this one the most amongst my songs at the time. Strangely, Sean loves MIND TRAIN, too. When Sean and I are making the program for YOKO ONO PLASTIC ONO BAND SHOW, Sean always says “And let’s do MIND TRAIN!” Like his Dad.”

The B-Side is another solo Ono composition, ‘Listen the Snow is Falling’, which had previouslybacked the single ‘Happy Xmas (War is Over)’ in America in December 1971.

Yoko picked up the train theme again in 2009 with ‘Waiting for the D Train’ on her album Between My Head and the Sky.

Waiting for the D Train

© Madeline Bocaro 2019. No part of this text  may be copied, photocopied, reproduced, translated or reduced to any electronic medium or machine-readable form, in whole or in part, without prior written consent. Reproduction in any form without the permission of Madeline Bocaro is prohibited. All materials contained on this site are protected by United States copyright law and may not be reproduced, distributed, transmitted, displayed, published or broadcast without written permission of Madeline Bocaro.