On the 10th anniversary of these incredible performances, we celebrate our wonderful memories of when Sparks presented their entire catalogue in 21 nights in Islington! 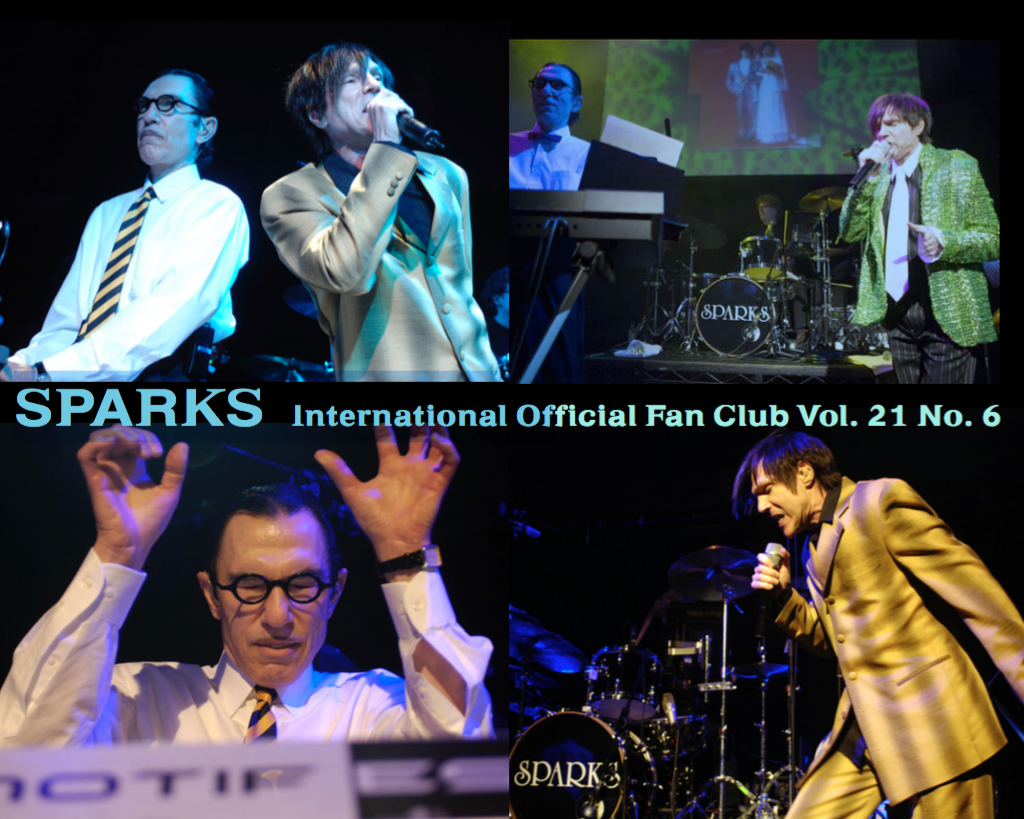 For Sparks fans, this is an amazing time to be alive!

What other band believes so strongly in their body of work, that they can perform every note of their four-decade career live with total conviction? NONE! What other band would subject themselves to a grueling four months of rehearsals and stress, building up to the ultimate crescendo of their new masterpiece? NONE! At the Carling Academy, Islington N1 the stage was set for this insane groundbreaking achievement, and it stayed set for 20 nights.

From the first click of Steve Nistor’s drum sticks counting down to begin ‘Wondergirl’ on 15thMay to Russell’s last high note on the encore of ‘This Town…’ on 13th June, Sparks’ entire oeuvre was a wonder to behold. The band spared no expense and left out nothing. Every note, every subtle nuance, every odd instrument; castanets, whistle, strings, horns, vocoder, pie in the face, moustache modifications – whatever it took — this was going to be spectacular!

The extraordinary band members perfected 250+ songs. Russell hit every note, even during rehearsals, confident that he would be strong enough to endure it all. Jim Wilson and Marcus Blake’s backing vocals blended seamlessly with Russell’s lead. Their incredible guitar work, utter Sparks fandom and dedication were quite obvious. Steve McDonald nailed it, as usual on bass. Steve Nistor was stellar on drums, and Tammy Glover made a triumphant return for three shows. The band members proudly wore matching corresponding Sparks album cover art on their black shirts each night. The album covers flashed and swirled on-screen as well.

The band’s stress and trepidation started to wane during the wild reception at the first show – the Halfnelson album. The audience echoed back every word. Excitement, tears of joy and sheer adoration permeated the venue. Everyone had a bewildered ‘I can’t believe I’m really here!’ look on their faces. We were all a part of history in the making. Russell’s spiffy red suit was the first of many to set the style of the gigs. ‘Biology 2’ got the most cheers.  ‘No More Mr. Nice Guy’ was dedicated to the album’s producer Todd Rundgren (then celebrating his 60thbirthday in Hawaii), for giving Sparks their first big break. These songs are timeless, and still utterly unique. Appropriately locale wise, ‘England’ was the encore. One down, twenty to go! Ron kept shaking his head, “What have we gotten ourselves into?!”

Woofer went down a storm. Russell’s juxtaposing sneering and crooning vocals on ‘Moon Over Kentucky’ were amazing to witness. ‘Here Comes Bob’ worked wonderfully with acoustic guitar and piano.  ‘Whippings And Apologies’ rocked everyone out of their minds! Morrissey’s favourite obscure Halfnelson demo ‘Arts & Crafts Spectacular’ was the promised encore. But where was he? The band is starting to catch the buzz from the crowd. They’re beginning to realize that their hard work has paid off, and that this is a truly special time for all of us.

The place was packed for the classic Kimono My House. Russell shimmered in his silver suit. Ron reprised his old moustache. A lucky fan caught the castanets when Russell tossed them into the crowd after ‘Hasta Manana Monsieur’ (professional ‘Aspire LP’ castanets in a light ash wood). The stunning epic ‘Equator’ went on forever. A very special guest was in attendance – KMH cover girl Michi Hirota! The B-side ‘Barbecutie’ closed the show.

Propaganda was the most difficult album thus far for the musicians. If they made a mistake, the quick pace of the complex songs would not allow a chance to fix it. Luckily, there were no mistakes! The ‘Propaganda’ / ’At Home At Work, At Play’ segue was rehearsed six times in the afternoon, so it would be flawless live. Russell looked suave in his blue suit. Ron uncontrollably erupted into his infamous shuffle during ‘Who Don’t Like Kids?’ and promised it wouldn’t happen again. Of course it did! ‘Lost And Found’ was the brilliant encore.

For Indiscreet, the Maels surprised the band at rehearsals with orchestral players who learned the songs on the spot! The fiddler had a hard time keeping up on ‘It Ain’t 1918’ but otherwise it was fantastic! Ron did his infamous ‘Dinner for twelve’ vocal. Producer Tony Visconti would have been proud. The lovely ‘Gone With the Wind’ was the encore treat. Three band members’ birthdays were celebrated with a cake and a song.

Big Beat rocked the house! The earth shook during ‘Big Boy’. Russell dedicated ‘Nothing To Do’ to the Ramones, who almost covered the tune at one time, and ‘Confusion’ to the late director Jacques Tati. Ron warned the audience not to take the lyrics to some of the songs seriously, especially ‘White Women’ and ‘Everybody’s Stupid’. ‘Tearing The Place Apart’ was the encore. At last, Russell fllubbed the lyrics, but with utter dedication, he stopped and started the song over. Ron made a legitimate defense for Russell: ‘During these obscure songs, there are some obscure chord progressions and obscure structure. We apologize for basking in obscurity’.

Introducing Sparks finally came out of the studio and proved to be really fun live. ‘Goofing Off’ was so enjoyable that Russell announced that it will be done again for the final show’s encore. Jim Wilson really shone with his tear-jerking guitar on ‘Those Mysteries’. ‘Alabamy Right’ was the bonus.

No. 1 In Heaven– Ron certainly let his hair down for this one! (Russell: “Check out the hair! An homage to another era!”) The very first live performance of this groundbreaking album is now finally possible. Technology has finally caught up with Sparks! Russell said, “It’s 180 degrees from last night!” The vocoder gave authenticity to ‘My Other Voice’. The smoke machine and strobe lights set the mood. Some band members even got the night off, thanks to synth substitutes!  Steve Nistor got a workout on drums! The encore was a song written by the Maels for an artist they produced back then, Noel’s ‘Dancing Is Dangerous’, which suited Russell’s voice perfectly! A sigh of relief from Russell when he announced at the show’s end, “Well’ we’re getting close to the end of the 70s – so we’re making progress!” But they were only one-third of the way through the 21 shows!

Terminal Jive– The album that the band worried about the most was actually delightful. The encore ‘Singing in the Shower’ was dedicated to the late Fred Chichin of Les Rita Mitsouko. The party continued with the frenetic Whomp That Sucker. Encore: ‘Get Crazy’

The sparkly green sequined jacket appeared for Angst In My Pants, and it still fits Russell like a charm! It’s amazing how the album’s sound is reproduced exactly, note for note, and how Russell’s voice sounds so pure and unchanged. Encore: ‘Minnie Mouse’.

In Outer Space (From Steve Nistor’s blog for Billboard.com…)

All of the songs have the band replaced by sequencers, keyboards and drum machines, so it was up to us to translate that to our current lineup. Real guitars and bass were added, and I used plenty of electronics and added a lot of processing to my drums. Hello, gated reverb! …Russell gave Ron a pie in the face after the encore, to which he replied, “We were only supposed to recreate the albums on a musical level, but tonight we’ve even recreated the cover for you…at my expense!”  ‘Sports’was the encore.

Pulling Rabbits Out of a Hat – Every album live sounded just like the record, especially this one. Russell thanked everyone for attending the less popular albums which were not released in the UK. ‘National Crime Awareness Week’ closed the show.

Music That You Can Dance To– A wild dance party. ‘Shopping Mall of Love’ was such a hit, that it was voted into the encore set list for the final show. A stunning version of ‘Change’ closed the show. The coolest thing about these shows was Russell saying at the end, “See you tomorrow night for (insert name of next album)!”

Interior Design – (from Steve Nistor’s blog) The performance was a great success. Lots of fans said they loved it and I did too. From a drummer’s perspective, it was challenging from an aerobic perspective. Intense disco beats followed by unflagging, quiet 16th note slow-jam grooves are a workout to keep up with. I did my best.(Two encores: ‘Big Brass Ring’/ ‘It’s Kinda Like The Movies’)

Gratuitous Sax– Sparks’ 1994 ‘comeback’ album screamed “Here we are again!” It was as brilliant as ever. Encore  ‘Marry Me’

PlagIarism– The Trinity College horns and strings joined in to replicate this fully orchestrated album with the original scores. There was a full-on Dixieland orchestral version of ‘Change’. Jimmy Sommerville guested on ‘The No. 1 Song In Heaven’. The encore was the obscure ‘Looks Aren’t Everything’

Balls marked the return of Tammy Glover on drums for the next three shows. Encore: ‘Katherine Hepburn’.

Lil’ Beethoven –The theatrics of this symphonic album worked well in the intimate setting. Tammy was joined on tympani by Steven Nistor. Encore: ‘Wunderbar’ with Russell taking over the Gunther Koch narrative.

Hello Young Lovers – This one was amazing. 70s B-side ‘Profile’ closed the show.

Ron got out of bed and began ‘Good Morning’. The Mael brothers’ synchronized choreography during  ‘I Can’t Believe That You Would Fall for All the Crap in this Song’ put the Temptations to shame. Ron’s mocking, over-the-top laughing fits were the perfect touch – ha ha! Six females impersonating Ron in their starched white belly-popping shirts cavorted in unison during ‘(She Got Me) Pregnant’. Renaissance women pirouetted, and directors yelled ‘cut’. On-screen, a Moz silhouette, a piano playing monkey and other illustrative images portrayed the lyrical mayhem. The live version of‘Likeable’ would have made Piaf weep.

The denouement: an extended loop of the heavenly ‘Intro’ played as Ron, in a very punk rock moment, ceremoniously and metaphorically set fire to Sparks’ previous 20 album covers on-screen amidst wild cheers. Perhaps this was Ron’s Dadaist homage to the anti-Beatles bonfires of the 60s, but this time the artist destroyed his own work, in a rage of spiritual cleansing.

As if the 21×21 spectacular wasn’t enough, Sparks invited fans to vote via allsparks.com for any song they wanted as the encore for the final show, no matter how obscure. The 14 winners; ‘Moustache’, ‘Looks Aren’t Everything’, ‘Big Boy’, ‘Goofing Off’, ‘Katherine Hepburn’, ‘Shopping Mall of Love’, ‘Those Mysteries’, ‘Dick Around’, ‘Get In The Swing’ and ‘Looks Looks Looks’ (both with orchestrations), ‘Batteries Not Included’, ‘Whippings and Apologies’, ‘Change’ and ‘This Town…’. The perfect coda to a perfect 21 shows!