At their first event together in June 1968 (Acorn Peace), John and Yoko planted two acorns beneath a circular white garden bench at St. Michael’s Cathedral in Coventry, England as part of the National Sculpture Exhibition.

The seeds were not only a symbol of Peace, but a symbol of East and West coming together. John and Yoko planted their acorns, one facing East, and one facing West symbolizing their places of birth; Liverpool and Tokyo.

The sculpture’s title was engraved on a mirrored plaque (although it took place on June 14th):

Yoko by John, John by Yoko

This is what happens when two clouds meet.

Their concept was that people could sit on the white wrought-iron seat and imagine the acorns growing into trees. They believed that the ‘seeds of peace’ in their living sculpture would multiply forever.

Out of this simple and innocent concept came the usual controversy that surrounded everything that John and Yoko did. The exhibition organizers determined that their piece was not a sculpture and should therefore not be placed with the other exhibits. The cathedral staff objected to planting their acorns in the cathedral grounds because John and Yoko had both been divorced. The site on the grounds of cathedral in Coventry was changed when Canon Verney refused to allow the unmarried couple to plant their acorns in consecrated ground. (Consecrated not only because it was a religious location, but also because this was now a national memorial site, as German bombs had destroyed the original cathedral during WWII).

The Canon also refused to allow the couple to distribute a booklet telling their intended meaning of the acorn event. On the booklet cover photo by Keith McMillan, John and Yoko were meant to seem as if they were emerging from two white flower pots. Their written statements were:

“This is what happens when two clouds meet.” – John Lennon

“This is what happens when two clouds meet.”

John and Yoko wielded shovels and planted the acorns themselves. Shortly after the planting, the original acorns were soon stolen by Beatles fans. Replacements were sent by John and Yoko, which were placed under 24-hour guard. John sent his chauffer Les Anthony to retrieve the bench for safety, which remained at John’s home, Kenwood.

The event did not attract much media attention, so in 1969 John and Yoko (now married) reprised Acorn Peace. They sent acorns to as many world leaders as they could think of, asking each one to plant the acorn for peace. Many did not respond, but several most likely planted their acorn. The couple received a ‘thank you’ letter from the Queen of England!

“We’re going to send two acorns for peace to every world leader from John and Yoko. Perhaps if they plant them and watch them grow they may get the idea into their heads”

“Enclosed in this package we are sending you two living sculptures –
which are acorns – in the hope that you will plant them in your garden and grow
two oak trees for world peace.

Yours with love,
John and Yoko Ono Lennon”

On 2nd May 2009, 40 years after the original mailing of John & Yoko’s 1969 Acorn Peace, Yoko sent 123 Acorn Peace boxes to world leaders and heads of state, including President Obama hoping they would plant them and grow two oak trees for world peace.

“We suddenly realised that when we planted the two acorns together, there was no distance between them. The famous poem of ‘East is east, and west is west, and never the twain shall meet’ was true – but John and I brought east and west together out of our love.”

THE BALLAD OF EAST AND WEST

Oh, East is East, and West is West,
And never the twain shall meet,
Till Earth and Sky stand presently
At God’s great Judgement Seat;

Most people only know the ‘never the twain shall meet’ line in Kipling’s poem about East and West. Few realize that in the second half of the poem, that strength brings unity, and ‘there is neither East nor West.’

But there is neither East nor West
Border, nor Breed, nor Birth,
When two strong men stand face to face,
Tho’ they come from the ends of the earth!

In 1996, Yoko organized a worldwide online event, Acorns: 100 Days with Yoko Ono, based on her instruction pieces. Beginning on the 40thanniversary of the Acorn Peace event, Yoko posted a cathartic, wise or perplexing instruction every day for 100 days. https://www.instagram.com/100acorns/

This later morphed into her hugely popular Twitter account where she continues to share her wisdom every day.
On 25th anniversary of John’s death in 2005, Yoko received a very welcoming return reception at the Cathedral upon the launch of Coventry Peace Month. An acorn was sent to every school in Coventry for children to plant and grow for peace. Yoko visited several schools in the city to plant more trees on their grounds. Her visit healed the 40-year rift with Coventry Cathedral.

“I am very pleased to dedicate the planting of these beautiful trees to the spirit of peace throughout the world. I am proud to carry on the work that John and I did together to spread this highly important message.” 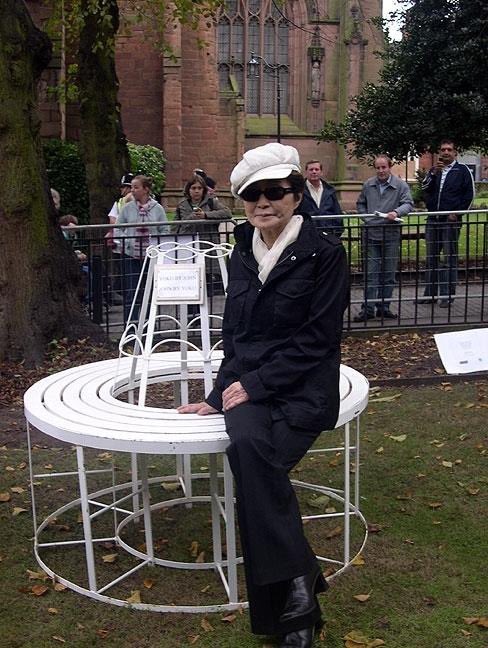 Yoko again returned to Coventry a year later, in 2006 to check on the Japanese oak trees she had planted near the cathedral. She returned yet again in 2012 to open an art installation at the cathedral.

A sequel to Yoko’s book Grapefruit titled Acorn was published in July 2013. It was another book of instructional poems (this time accompanied by her drawings).
The line “fifty acorns tied in a sack” from the song, “The Ballad of John and Yoko” refers to their acorn campaign.

as John stated in his song ‘Mind Games’ many years later.

He predicts that ‘The twain shall meet in his song ‘You Are Here’.

“The concept of these sculptures by John Lennon and Yoko Ono is expressed by their statement. “This is what happens when two clouds meet”. It is both symbolic and humorous at the same time. The thoughts behind it are beautiful and its true fulfillment through the cycle of growth is an end in itself? the best idea that can ever be conceived as a work of art? Mother nature is supreme, overriding man’s artificial constructions. The seeds, although they cannot be seen at this stage, are acorns and slowly the oak trees will develop. It covers all fields for them? It’s a game, a joke, but at the same time serious, in the idiom of their music, their writings or even. These ideas place them on a different level than other sculptures in the exhibition, so they need to be looked at through new eyes. Cry, laugh, or walk into the sky. There will never be another like them.”

A 1971 letter from John & Yoko to President Josip Broz Tito inviting him to plant two acorns for peace. The two oak trees are still growing in Tito’s former residence in Belgrade. 2020 marks 40 years after the death of the Yugoslav leader in May 1980. 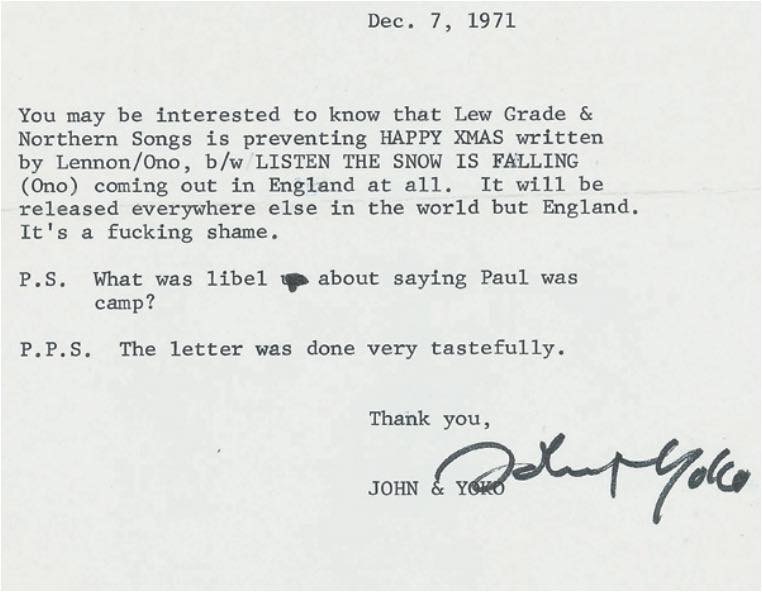 2 thoughts on “John and Yoko’s Seeds of Peace”