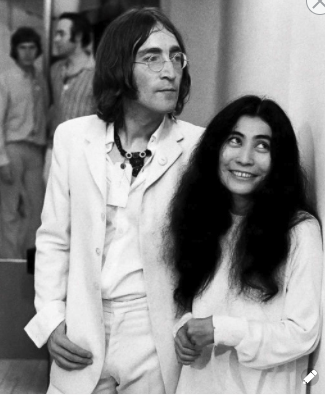 John Lennon’s first art exhibition, You Are Here (To Yoko From John Lennon, With Love) opened at the Robert Fraser Gallery at 69 Duke Street, London on July 1, 1968. John had just moved out of Kenwood, the home he had shared with his wife Cynthia. John and Yoko collaborated on their first public event together. They had only been together for just over a month at the time and had already made Unfinished Music No. 1 Two Virgins (the album and the film),  Film No. 5: Smile and had staged their Acorn Peace event at Coventry Cathedral. They certainly hit the ground running!

Gallery owner Robert Fraser was a socialite with an extraordinary personality. He was a great influencer in  the counter-culture of 1960s swinging London. A great friend of pop stars and artists, he presented the best avant-garde art at his gallery. As Paul McCartney’s art dealer, it was Fraser who recommended Peter Blake to The Beatles to design the assemblage of pop culture figures on the Sgt. Pepper’s Lonely Heart’s Club Band album cover. Next, he recommended another British artist –  the progenitor of Pop Art, Richard Hamilton – to design the next Beatles album cover.

“ …I can’t follow Peter Blake. I can’t fill the cover with anything as exciting as he did. So I’ll back out. I’ll just make it white. And this idea was accepted, I think partly because Yoko Ono would have seen the point. I think she may have been influential. I’m not sure that they quite understood. All I wanted to put on it was a number, to make it an edition of five million, and they should be numbered from one to five million. That seemed to me to be a Fluxus idea. I would have liked to have signed them all if it were possible in a way, to make it a real art object.”

Fraser is also responsible for The Beatles’ Apple Records logo when the label was launched in summer 1968. The logo was first used on the single ‘Hey Jude’/’Revolution’.

“I had this friend called Robert Fraser, who was a gallery owner in London…We were discovering Magritte in the sixties… we just loved his sense of humour. And when we heard that he was a very ordinary bloke who used to paint from nine to one o’clock, and with his bowler hat, it became even more intriguing. One day Robert brought this painting to my house.”

The name of the painting is actually ‘Le jeu de mourre’ (The Game of Mora). In René Magritte – Catalogue Raisonné (1993) it is listed as number 1051 and situated late in the artist’s life, in 1966. Paul still owns the original painting.

“We were out in the garden and Robert didn’t want to interrupt, so when we went back in the big door from the garden to the living room, there on the table he’d just propped up this little Magritte. It was of a green apple. That became the basis of the Apple logo. Across the painting Magritte had written in that beautiful handwriting of his ‘Au Revoir’. …And this big green apple, which I still have now, became the inspiration for the logo. And then we decided to cut it in half for the B-side!””

At the exhibition’s opening, John released 365 white helium balloons into the sky (the same figurative number of bottoms had appeared in Yoko’s Film No. 4). As John cut the ropes to release the balloons he said, “I declare these balloons high.” John’s concept – derived from a boyhood memory of finding a similar object as a boy – was the reverse of a message in a bottle. Attached to each balloon was a blank tag – with only the name of the exhibition on it – meant for the recipients of the balloons (wherever they landed) to write a message on and return to the gallery’s address printed on each tag.  Responders received a letter and badge from John in return which read, “Dear Friend, Thank you very much for writing and sending me my balloon back. I’m sending you a badge just to remind you that you are here. Love, John Lennon.” Although most responses were from well-wishers, others were insulting jabs at John and Yoko’s relationship.

A large round white canvas inscribed by John in tiny letters stated, “You Are Here.” We can guess that he got this idea from Yoko’s ‘Yes’ painting which sparked his interest at their first meeting at Indica gallery in November 1966 (with the word ‘Yes’ written in tiny letters placed on the ceiling above a ladder with a magnifying glass). Indica’s owner John Dunbar was present amidst the media frenzy at the Fraser gallery exhibition, as was underground filmmaker Kenneth Anger who popped some of the balloons with sparklers.

Other items in the exhibition were charity collection boxes raising money for the downtrodden. Hornsey Art College students send John a rusty bicycle with the note, “This exhibit was inadvertently left out.” John put it on exhibit.

“I think you could certainly say that the Robert Fraser Gallery was the driving force of the European avant-garde scene in the art world.”

As with Yoko’s conceptual Museum of Modern (F)Art exhibit in 1971, hidden cameras filmed the reaction of attendees, but the intended You Are Here film was never made. The media was more interested in the John and Yoko spectacle and dismissed the art as fodder. 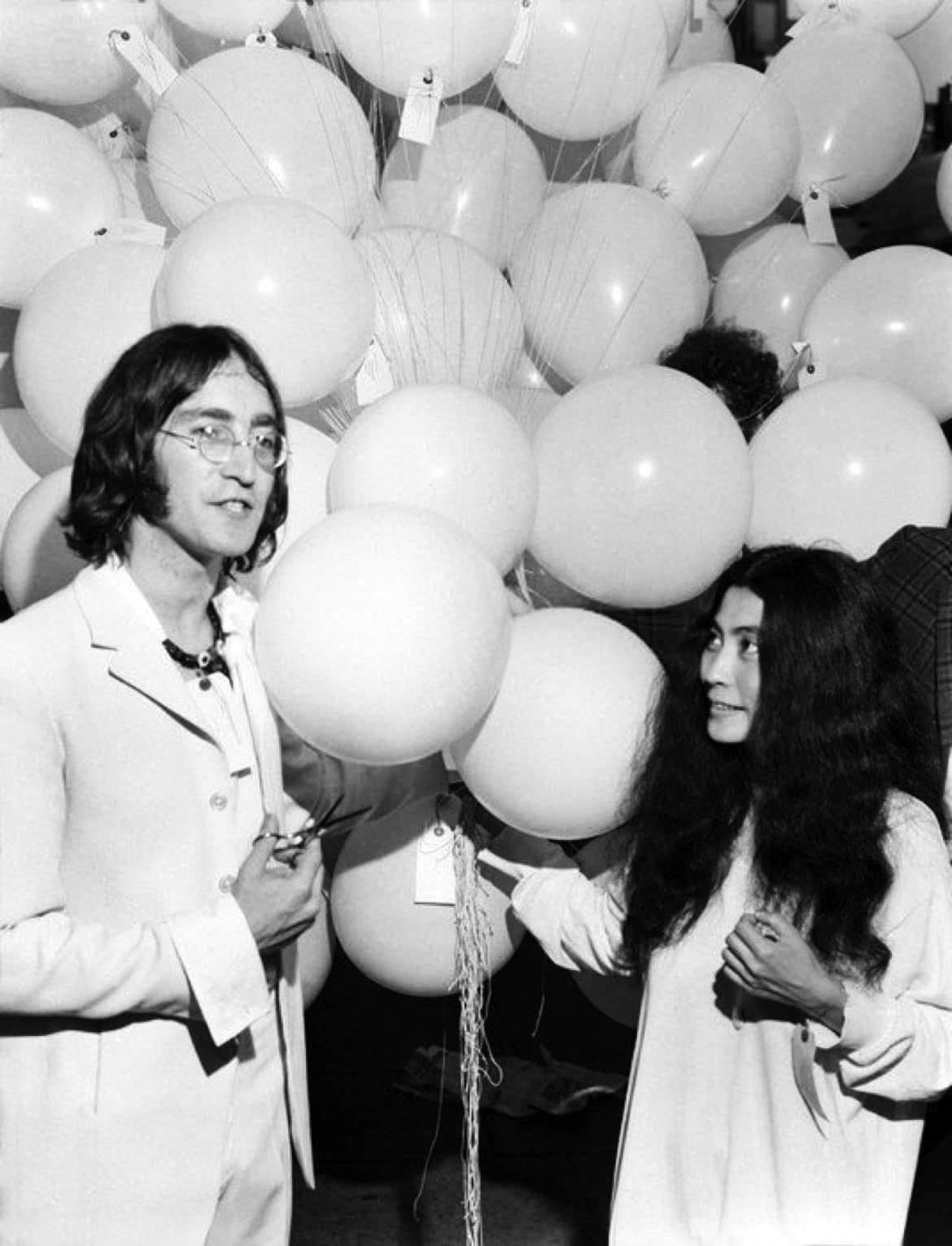 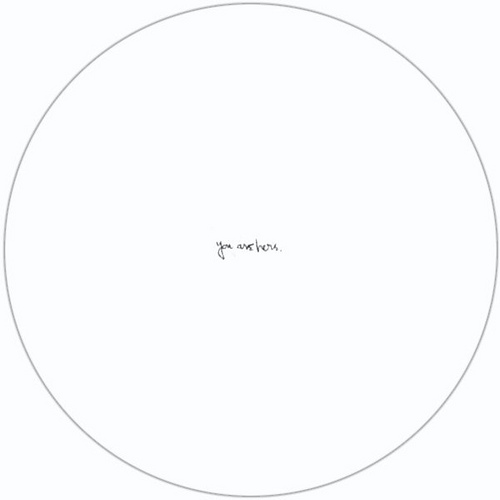 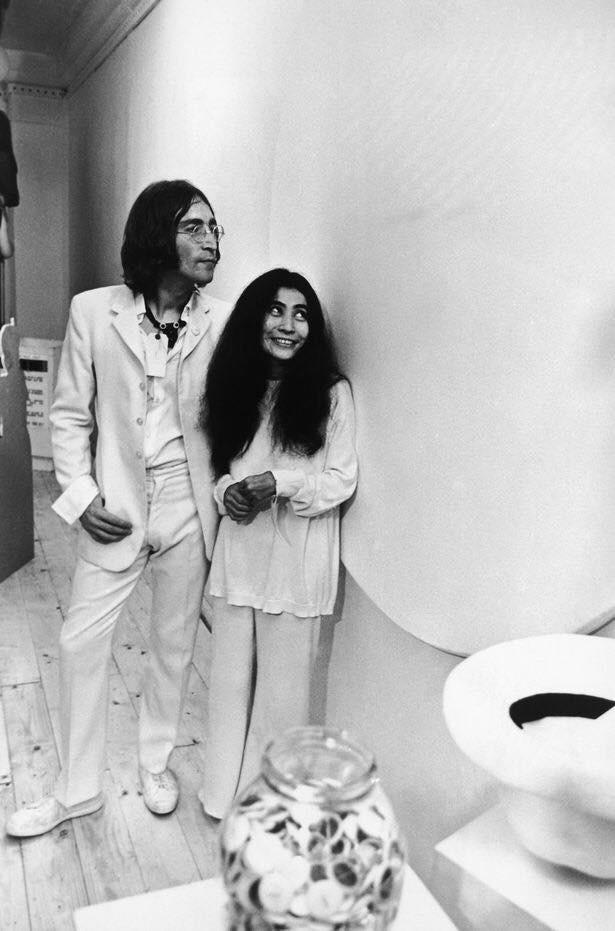 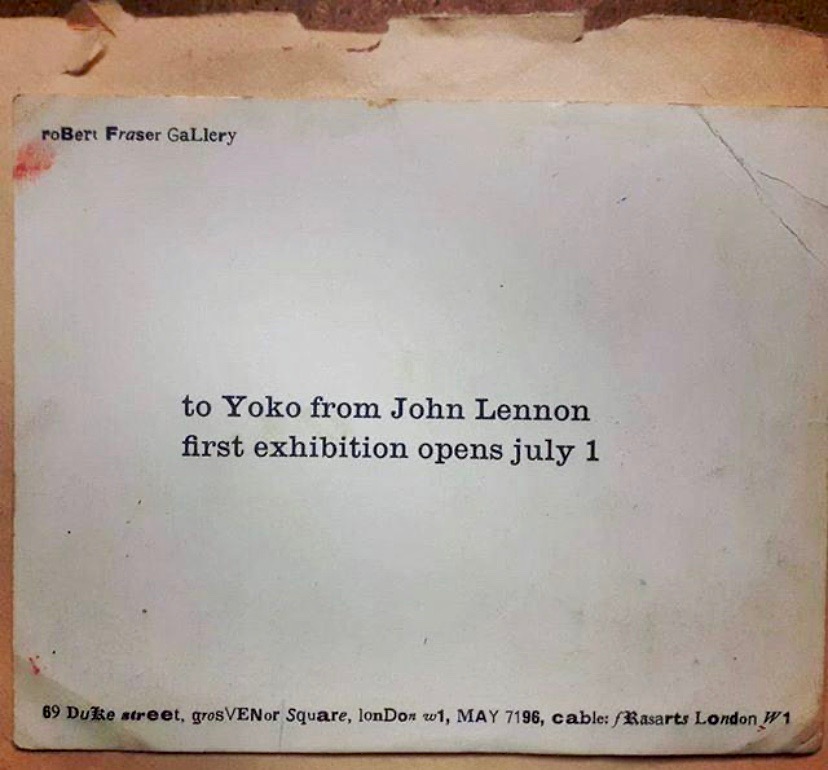 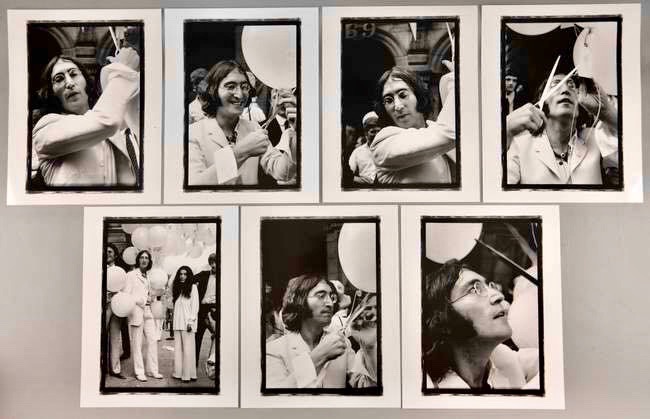 Watch this cool video clip about gallery owner Robert Fraser. I just read the book about him, Groovy Bob!

The sex & drugs & rock ‘n roll life (and death) of London art dealer Robert Fraser who championed Andy Warhol’s work in the U.K. in the 1960s and was the subject, along with Mick Jagger, of Richard Hamilton’s painting Swingeing London. Warhol screened The Chelsea Girls at Fraser’s London flat in 1967. With Jim Dine, Kenneth Anger, Anita Pallenberg, Mick Jagger and Keith Richards of the Rolling Stones and Marianne Faithfull. Clips from Art and the 60s – Groovy Galleries.

7 thoughts on “You Are Here (To Yoko From John Lennon, With Love)”