Yoko Ono met John Cage early in her career in the late 1950s. They mutually influenced each other’s work. In many ways, they were ‘silent’ partners. Their commonalities were a great appreciation of Japanese tradition and culture, and strong disregard for the concept of ‘high art’.

“What Cage gave me was a confidence that the direction I was going in was not crazy.  It was accepted in the world called “the avant-garde.” What I was doing was an acceptable form. That was an eye-opener for me…” 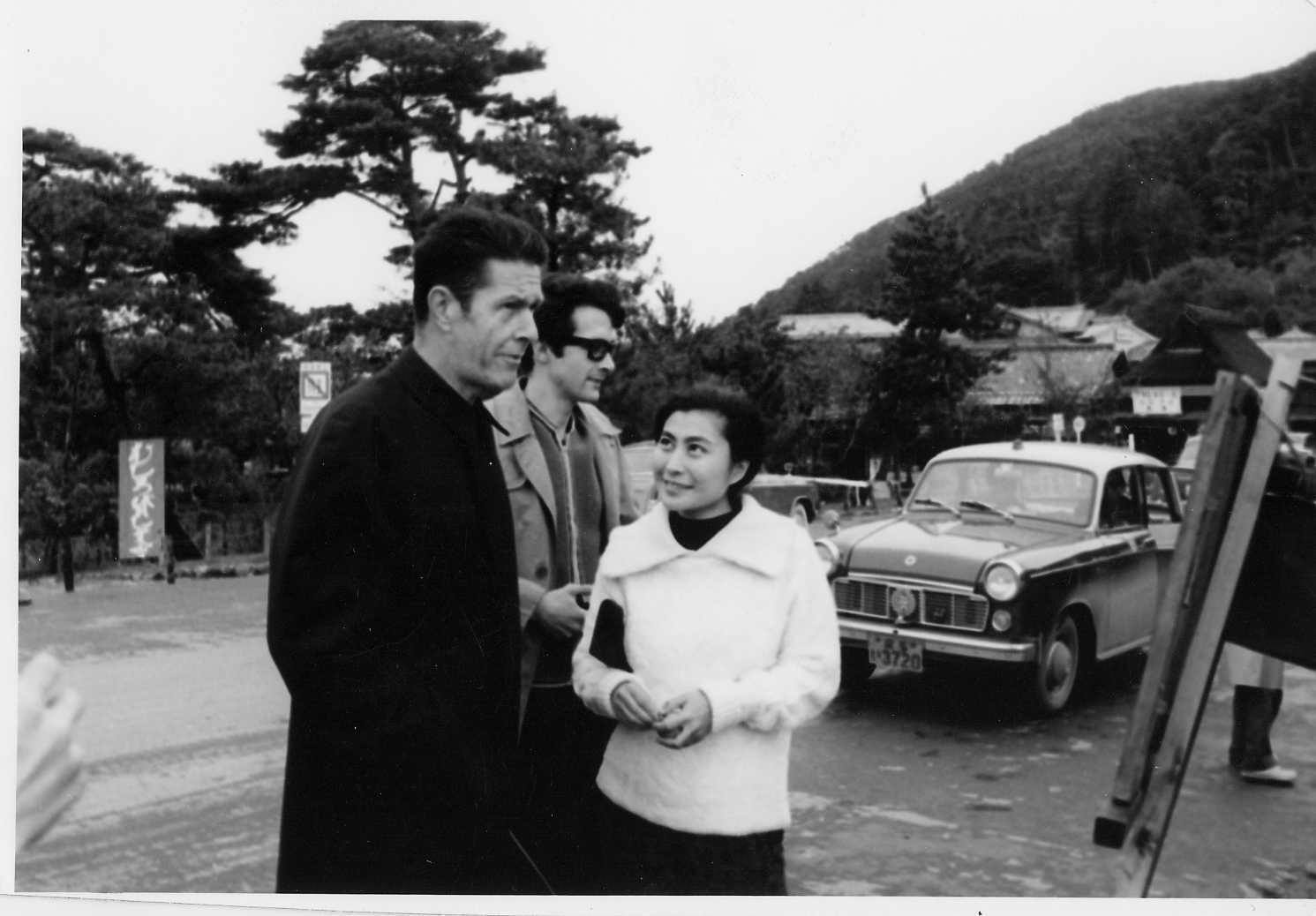 American composer John Cage was a student of Schoenberg and Edgard Varèse . He pioneered non-conventional use of musical instruments, theorized about and experimented with silence and the possibilities of sound. Cage also influenced the development of Modern Dance as collaborator and romantic partner of dancer/choreographer Merce Cunningham.

It took a little while to cement Yoko and John Cage’s friendship.

“I did not immediately take to someone who was considered an authority of some kind. I mean John Cage was already an authority in some ways, you know; people respected him. I was just being a bit cynical.”

John Cage was a colleague of Yoko’s first husband Toshi Ichiyanagi whom she married at age 23 in 1956. Toshi was then a student at Juilliard (he is now a well renowned composer in Japan). All three attended D.T. Suzuki’s Zen Buddhism class at Columbia University. Toshi was a student at Cage’s New School course.

In 1961, Cage and Ichiyanagi performed at the downtown New York City jazz venue, The Village Gate.

Along with the progenitor of Minimalism, La Monte Young and electronic composer Richard Maxfield, Yoko presented a series of concerts in her studio loft, a walk-up in a neighborhood which would be known as TriBeCa decades later. The concert programs read, “THE PURPOSE OF THIS SERIES IS NOT ENTERTAINMENT.” Yoko’s ‘Chambers Street Loft Series’ ran from December 1960 to June 1961.

“…Because at the time there was only Town Hall, Carnegie Recital Hall and Carnegie Hall. Only three places for concerts…” – Yoko to Arthur Magazine 2007

The many performers included La Monte Young, Toshi Ichiyanagi. John Cage.  Peggy Guggenheim, George Maciunas, avant-garde pianist David Tudor and members of the Fluxus art movement and Marcel Duchamp were all attendees. Yoko also performed some of her art pieces at the loft.

“It was snowing and people from Stony Point, which was David Tudor, John Cage and Merce Cunningham, those people came down. They were the first ones. Bundled up, because it was a cold water flat.”

Returning to Tokyo in 1962, Yoko performed Works of Yoko Ono at Sogetsu Art Center. This was the prelude to a six-performance series by John Cage, whom Toshi had invited to Japan. In Cage’s piece Piano Walk, Yoko lay on the strings of an open grand piano with her long hair hanging off the side, while John Cage, Toshiro Mayuzumi* and David Tudor hit the strings with various objects. It was a media sensation eliciting the bold headline, “Keji shokku” (Cage Shock) .

Yoko’s 1962 performance with Cage, Toshi Ichiyanigi, David Tudor and Kenji Kobayashi was released as part of a three-disc set in September 2012 called Shock! – a recap of Cage’s Japan tour. On disc 2, Yoko vocalizes on the track “26’55.988”, a piece with two pianists and a string player.

In 1966, as part of a project collecting manuscripts from popular musicians for John Cage, Yoko approached Paul McCartney for some Beatles lyrics. As Paul was unwilling to part with any, he suggested that she ask John Lennon, whom she happened to meet weeks later at her exhibition at Indica gallery, Yoko Ono: Unfinished Paintings and Objects… and the rest is history!

“I was creating similar work to John Cage, but I felt slightly different to him, too. We had arguments when we toured Japan together in 1962. He did a piece called 4’ 33” (a conceptual work consisting of purely ambient sounds with no contribution from musicians at all) and I didn’t know why it had to last a specific period of time. Why did it have to be four minutes and 33 seconds? He talked about how in the West you had to have a frame, so he dedicated a work to me called “0’ 00”. – Yoko

His famous work ‘4:33’ is actually an experiment in silence, the findings of which conclude that there is no such thing as complete silence. He staged the work in Woodstock, New York in 1952. David Tudor sat at a piano for 4 minutes and 33 seconds, without playing a single note. He opened and closed the keyboard lid 3 times to signify distinct periods of silence. Ambient noises in became the actual music. Yoko had independently written a piece called ‘Silent Music’ in 1952.

Cage’s silent piece was partly inspired by Robert Rauschenberg’s White Painting series made in 1951 and shown publicly in 1953. The canvasses were painted pure white to represent art in its most pure and minimalistic nature. Cage saw Rauschenberg’s white paintings as ambient, hyper-sensitive surfaces reflecting light and capturing shadows. And of course, Yoko’s primary color in all of her art has always been white.

Ono and Cage were also greatly inspired by Asian culture, especially the I Ching, Buddhism and Haiku.

Cage’s written or suggested scores paralleled Yoko’s way of ‘transcribing’ sounds with written instructions, such as Secret Piece in her book Grapefruit.

“In a situation having maximum amplification, or none (or both),

The next day, he added further instructions, allowing interruptions of the action, not repeating the same action in another performance, and that the action should not be the performance of a musical composition. This was his third and final work in his series corresponding to the 3 lines of Haiku poetry.

The greatest mash-up ever!

Cage’s pieces were “to be performed in any way, by anyone”. This was a crucial aspect of Yoko’s work as well, as were her instructional scores. The score for  0’00” is dedicated to Yoko Ono and Toshi Ichiyanagi. Yoko reciprocated by dedicating some of her own works to Cage, referring to him as ‘Jesus Christ’ (as he was so highly revered in the music world, and his initials were J.C.)

Yoko felt unimportant as merely a participant in Cage and Ichiyanagi’s performances.  This led to a period of severe depression in 1962, a suicide attempt and hospitalization, and to divorcing Toshi. She did not make music again for many years.

In Yoko’s Sky Piece to Jesus Christ, members of an orchestra are wrapped in gauze bandages during a concert rendering them unable to play their instruments. The title is not a reference to Christ, but to John Cage, who was celebrated in the avant-garde music world “like Jesus.” In this piece, the sky represents freedom, contrasting with the bondage of the musicians. This was first performed at Carnegie Recital Hall in 1965. It has become a popular piece, performed by other artists worldwide.

Sky Piece for Jesus Christ was performed by the Southbank Sinfonia orchestra at London’s Queen Elizabeth Hall on June 23 during the 2013 Meltdown Festival, which Yoko curated. Introducing the piece, Yoko explained its creation. She was listening to music while creating a sculpture, which “became so beautiful, according to me.” So she thought it was a great idea “to have the process of creation as sculpture too.” She thought about making music with interruptions. Here, she presents pure music with reality interrupting it. At the end of the performance, the wrapped musicians are guided off-stage all connected together, resembling a chain gang.

Yoko performs Wrap Piece on the Jonathan Ross Show in May 2013.

In 1987 Yoko was invited to participate in a John Cage 75th birthday tribute along with several other artists. She created a bronze version of her all-white chess set, ‘Play It By Trust’. This led to Yoko’s ‘comeback’ to the art world with an exhibition at the Whitney Museum in 1989 – Yoko Ono: Objects, Films which travelled to many cities as The Bronze Age. It had been 15 years since Yoko’s 1972 This Is Not Here retrospective at The Everson Museum of Art in Syracuse, NY. At the time, had not exhibited her art since then. As part of Yoko’s return to the art scene. Original transparent works from the 1960s were presented at the Whitney side-by-side with bronzed versions of the same pieces.

Yoko Ono and John Cage remained close friends until his passing on August 12, 1992 at age 79. 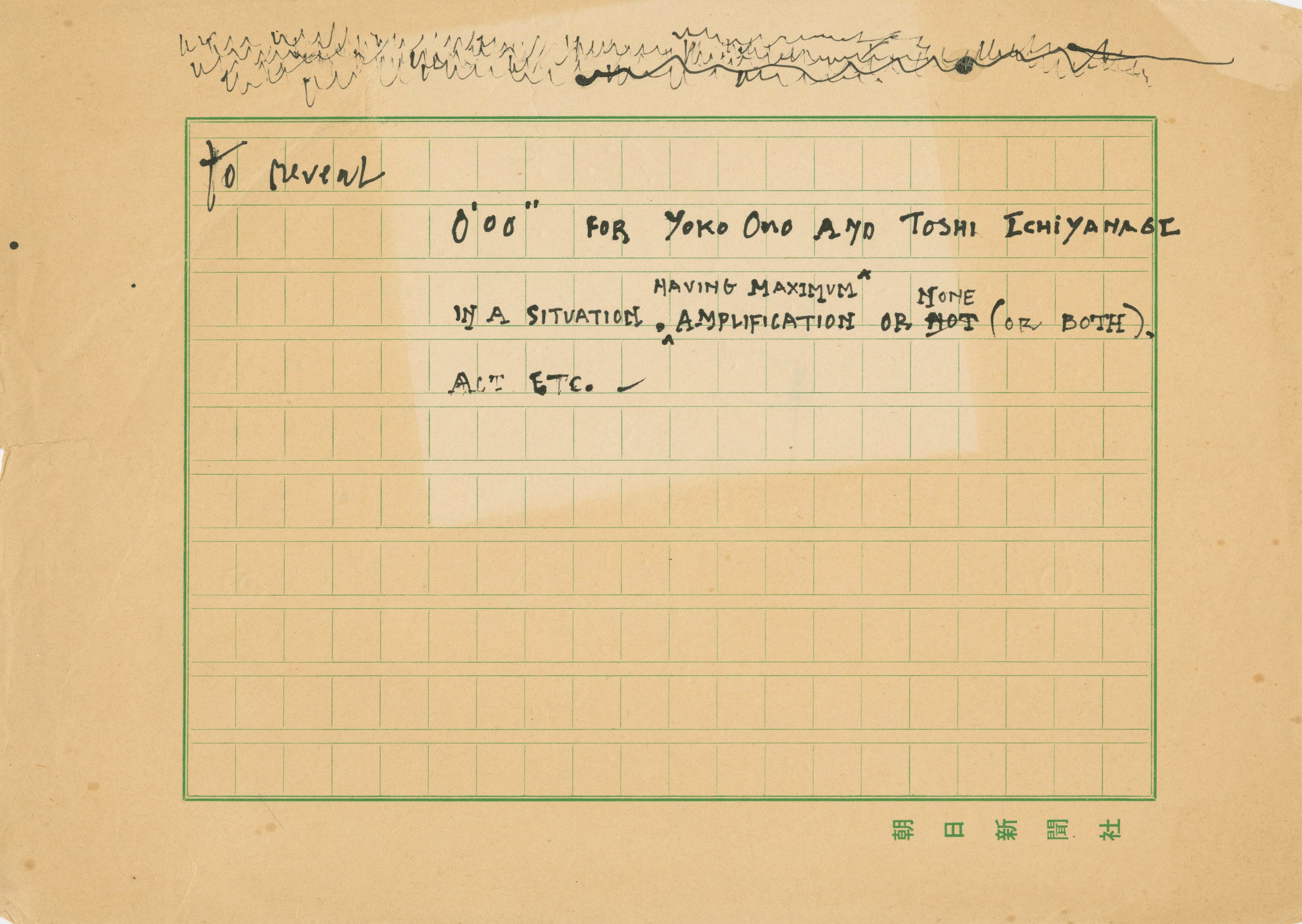 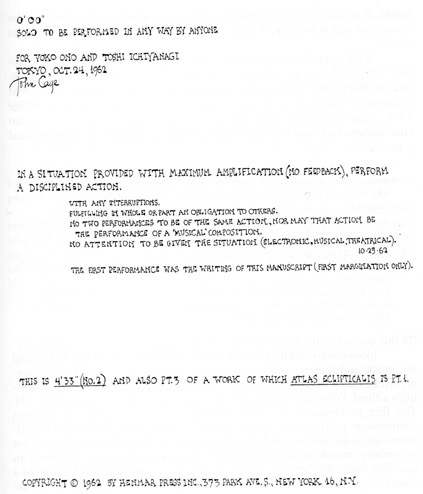 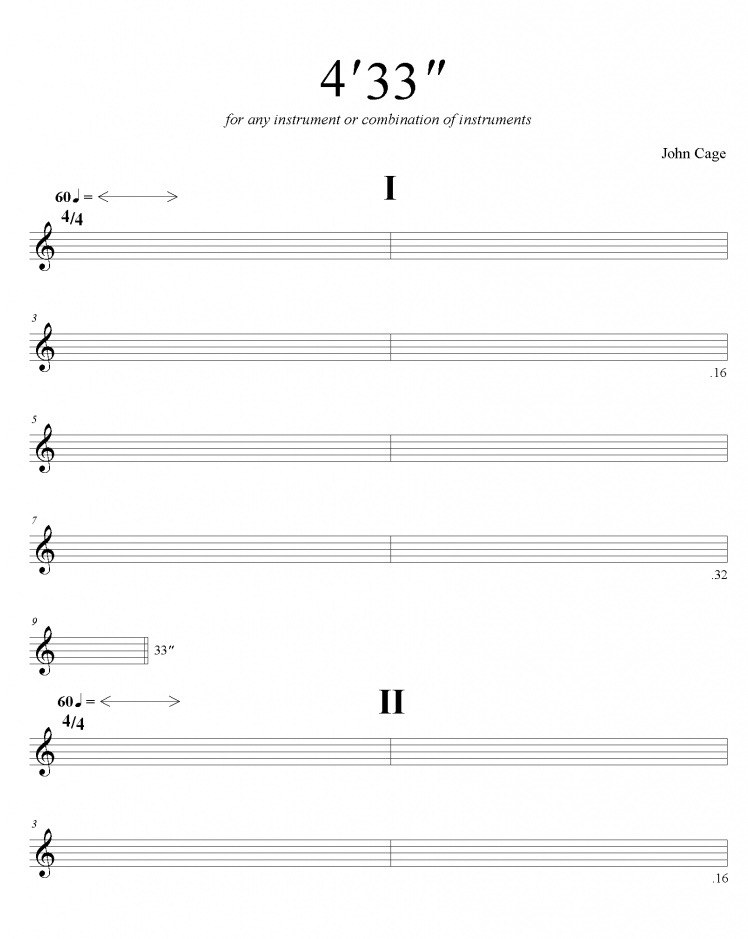 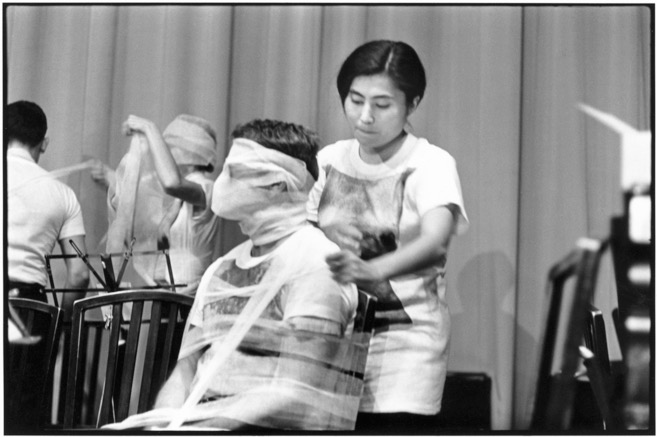 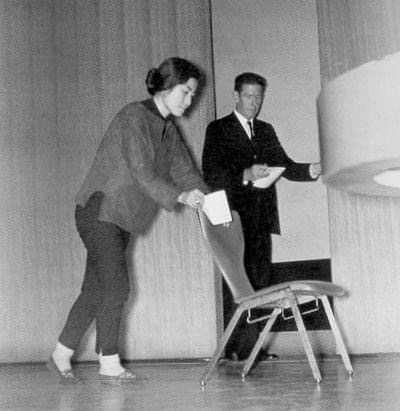 John Cage (and Merce Cunningham’s) letter to Yoko on December 9, 1980

(the day after John Lennon’s death): 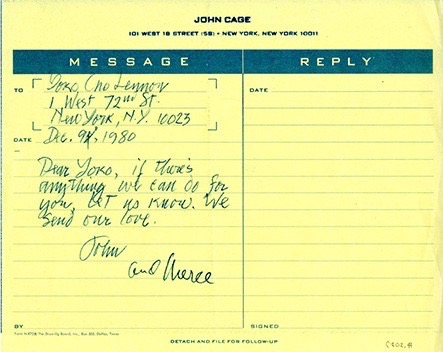 5 thoughts on “Yoko and John… Cage”