© Madeline Bocaro, 2018. No part of this site may be reproduced or reblogged in whole or in part in any manner without the permission of the copyright owner.

This is an excerpt from my book:

JOHN AND YOKO’S DREAM HOME, Tittenhurst Park housed Ascot Studios which John had constructed to record his album and film, Imagine. The gorgeous white house and sprawling property is an idyllic backdrop for the film, lending a Camelot like atmosphere (although some of movie was also shot in New York City). The Beatles’ final photo session was taken on the grounds. 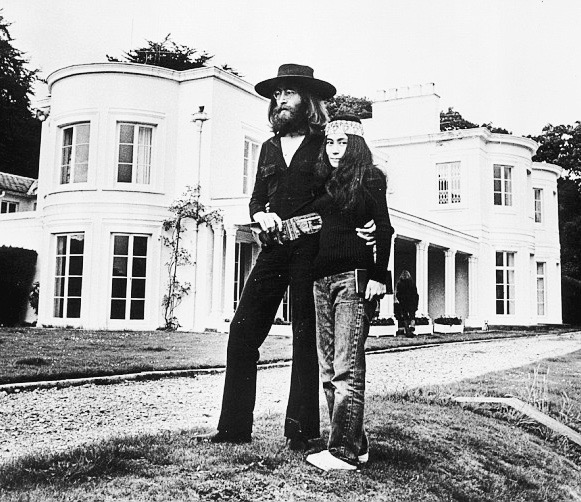 The estate was located in Ascot, about 50 miles from Abbey Road studios. John and Yoko bought the Georgian style house and property on May 4, 1969 for £145,000. They moved in on August 11, 1969 with an entourage of assistants. A Krishna swami and his devotees introduced to the Lennons by George Harrison soon occupied the temple on the property.

John and Yoko made lots of renovations (walls were knocked down to make bigger rooms, all painted white). Construction continued up until the time they moved out. Yoko baffled the gardener by asking him to plant only black and white flowers on the property.

Tittenhurst, which was once a tree museum, has magnificent gardens with trees imported from different countries (as Yoko later achieved with the Strawberry Fields memorial for John New York City’s Central Park). John and Yoko were photographed by their friend and assistant Dan Richter beneath a huge oak tree at Tittenhurst for the covers of their solo albums John Lennon / Plastic Ono Band and Yoko Ono / Plastic Ono Band in 1970. The gardens included one of the tallest cedar trees in England. John and Yoko installed a man-made lake, creating a small island on which they placed a little white bungalow. An unexploded WWII bomb was found when digging to create the lake.

The large residence and all the buildings surrounding it including a temple were pure white. Yoko laid white carpeting throughout the house. Huge windows and white walls bathed the rooms in sunlight. It was the perfect place for John and Yoko to live, yet they spent only a short time there.

“John and I thought we would make Ascot our home and live there for many many years to come. Otherwise, why did we plonk a huge lake in the garden and plant feeble-looking plum and cherry saplings around the lake which promised to become trees in twenty years’ time?

When they left in 1971 for New York, John was never to return to England again.

I know I’m insane, but I was so happy to see actual film of the donkeys at Tittenhurst in the 2018 John and Yoko documentary Above Us Only Sky. (See photos below).

I love the quote about the animals from Scott Cardinal’s book series about Tittenhurst – Volume 2, from one of the Krishnas staying there…

“I arrived at an enclosed isolated pasture where the “Apple mule” munched peacefully… The mule reminded me of Eyore, Winnie the Pooh‘s friend. I was staring at the mule he was staring at me – as I was chanting, he was listening.”

(The two animals were supposedly dropped off anonymously at Apple Records office and adopted by John & Yoko).

When John and Yoko moved to New York City permanently in the summer of 1971, they sold the property to Ringo Starr who enjoyed it for several years.  In 1988 Ringo sold Tittenhurst Park for £5 million to Sheikh Zayed bin Sultan Al Nahyan, President of the United Arab Emirates and ruler of Abu Dhabi.

Ascot Sound Studios, where Imagine was recorded was renamed Startling Studios by Ringo and was rented by many bands including T. Rex, Def Leppard and Judas Priest.

The band Squeeze shot their video for the song ‘Up The Junction’ in the kitchen and ‘Cool For Cats’ was shot in the temple on the premises at Tittenhurst Park.

Def Leppard recorded their first album at Startling studios in 1979. The cover art for their 2008 album Songs from the Sparkle Lounge (resembling the RINGO album cover) features someone in the crowd holding up a ‘This Is Not Here’ sign, like the etched glass window above the door of Tittenhurst Park. Joe Elliott (singer) had been unaware – until I told him – that ‘This Is Not Here’ was a concept art piece by Yoko, and also the title of her retrospective exhibition at Everson Museum of Art in Syracuse, NY. It ran from October 9 (John Lennon’s 31st birthday) through October 21, 1971 featuring works by Yoko, John and several of their friends. The Everson show was a major Fluxus related event and a semi-retrospective of Yoko’s career.

In the early 1960s Tittenhurst Park was owned by Peter Cadbury, a business tycoon (once a test pilot). He cultivated the grounds to make a tree museum which he opened to the public for charity. The gardens had taken 300 years to plan and to plant. The multitudes of rare trees and flowers included Chinese palms, Nevada redwoods, cedars of Lebanon, weeping cherry trees from Japan, rare camelias, 30 varieties of magnolias, catalpas with monkey puzzle trees, copper oaks, beeches and cypruses.

Watch an old Pathe video of the grounds:

The big white house surrounded by immaculate gardens – the home of a 300-year old ‘tree museum’ full of examples of rare plants and trees.  Peter Cadbury, owner of the house and gardens, drives a tractor across a lawn, in the background is small wooden cottage. A topiary arch over the beautifully landscaped garden – Peter opens the gardens to the public to raise money for charities.

Picture yourself descending the famous staircase where beautiful Yoko with her gloved hands, elegantly held her cigarette in its long holder while walking downstairs in the Imagine film (at the start of ‘Mrs. Lennon’). Look to your left and see framed photographs of camels and sheiks on the wall (replacing Yoko’s three Hammer a Nail In paintings). Look to your right and see ornate Ming vases.

Stroll through the once pristine sprawling white house and you will be stunned by the heavy burden of patterned curtains blocking the gorgeous windows of the great white room. Once bright and sunny, it is now devoid of light. The wall which John and Yoko had removed to make the room larger now partitions it once again. Behold the space where the white piano stood – it is virtually unrecognizable. Framed paintings of Arab Sheiks adorn the walls. A busily patterned rug replaces the pure white carpet. Look around and marvel at statues made of gold. Look up and see gigantic chandeliers. This hodgepodge of design must be due to the varied tastes of the Sheik’s 12 wives!! It seems that they could not agree at all! But they have toothbrushes made of gold! And they only spend four weeks a year at Tittenhurst.

A judge deemed some of their alterations as vandalism and imposed a monetary penalty! 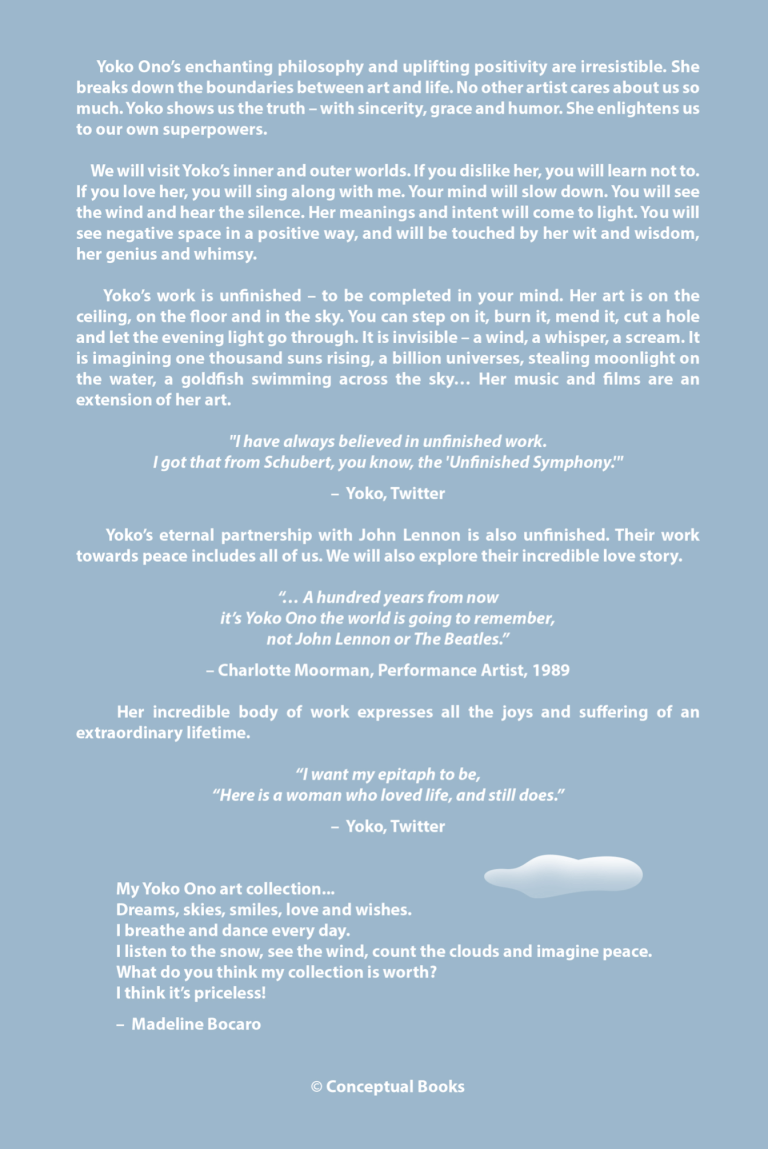 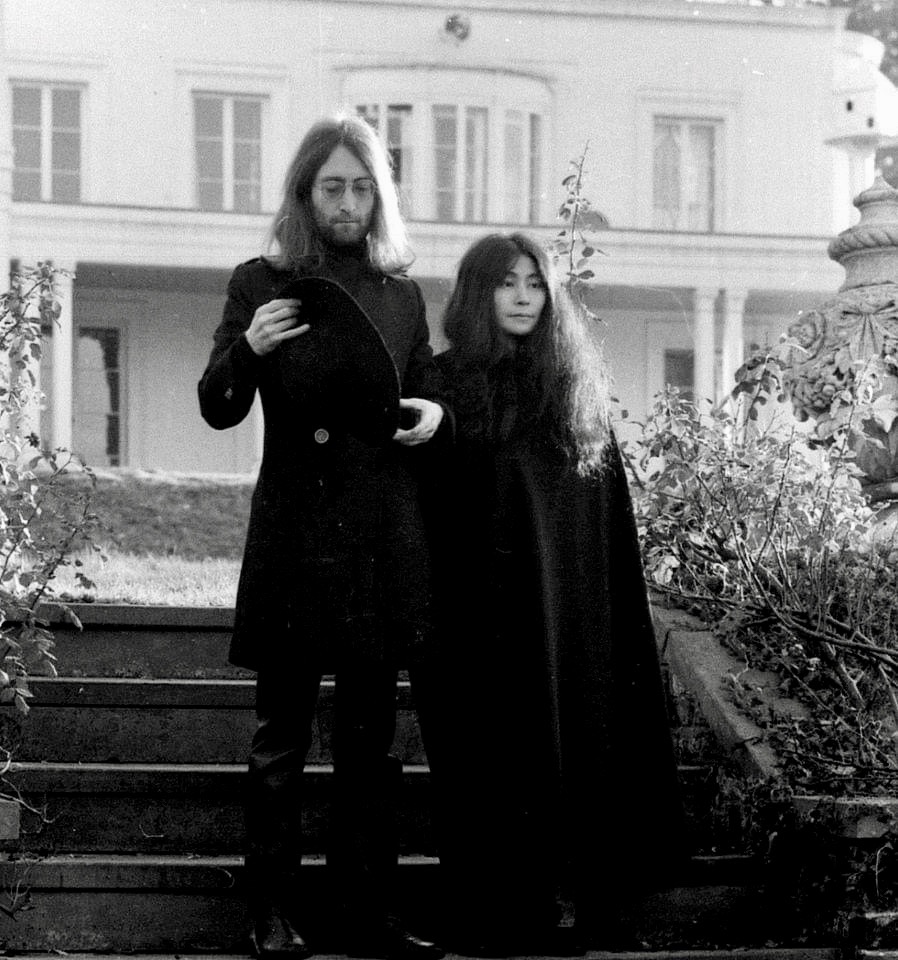 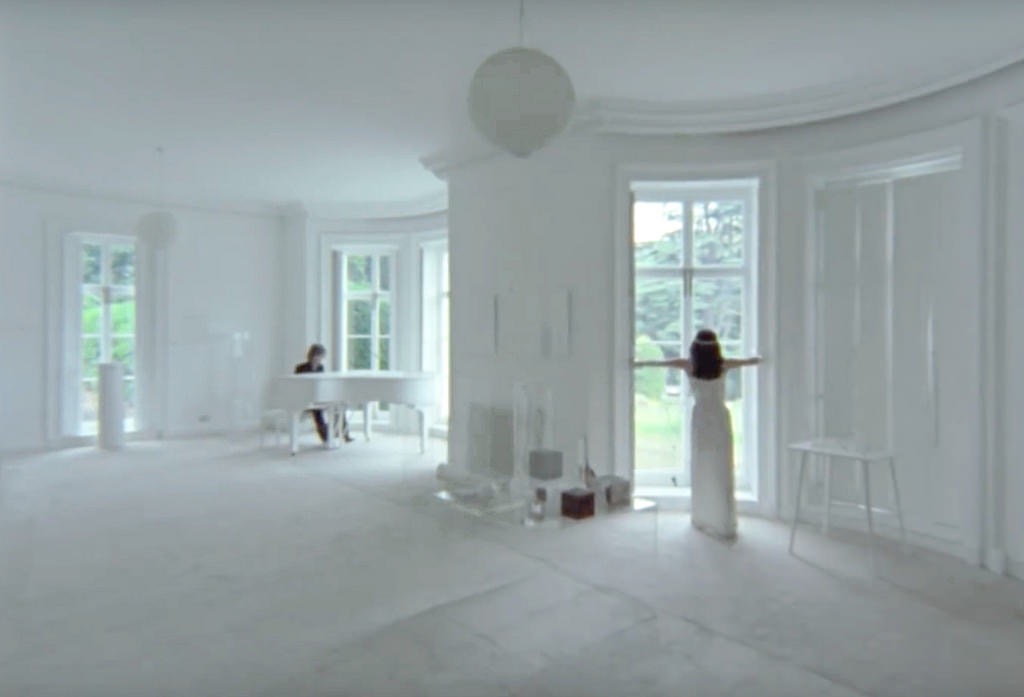 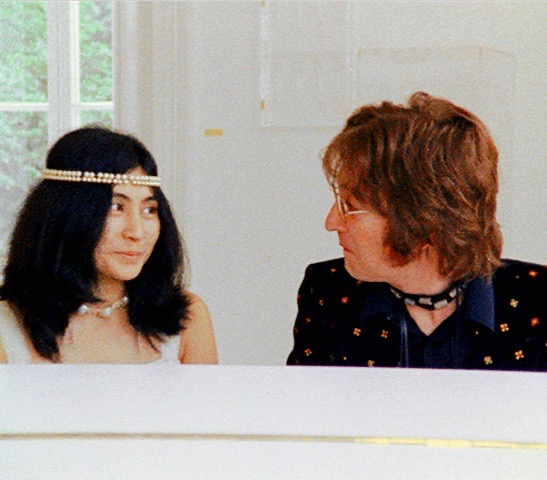 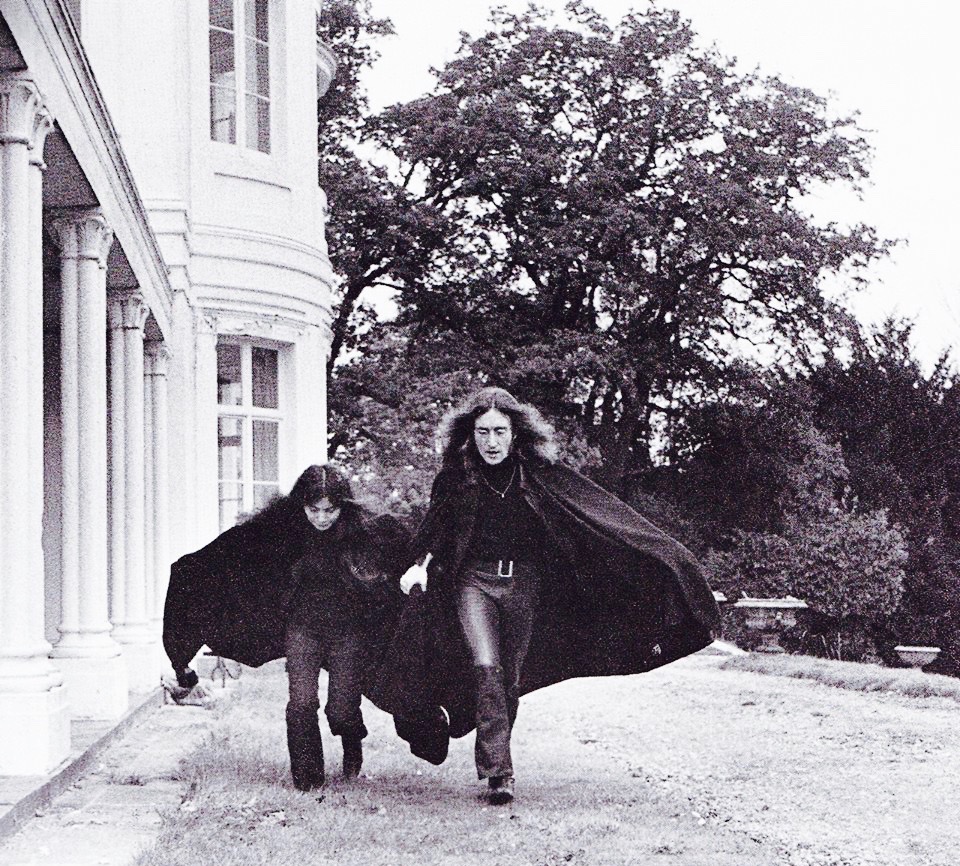 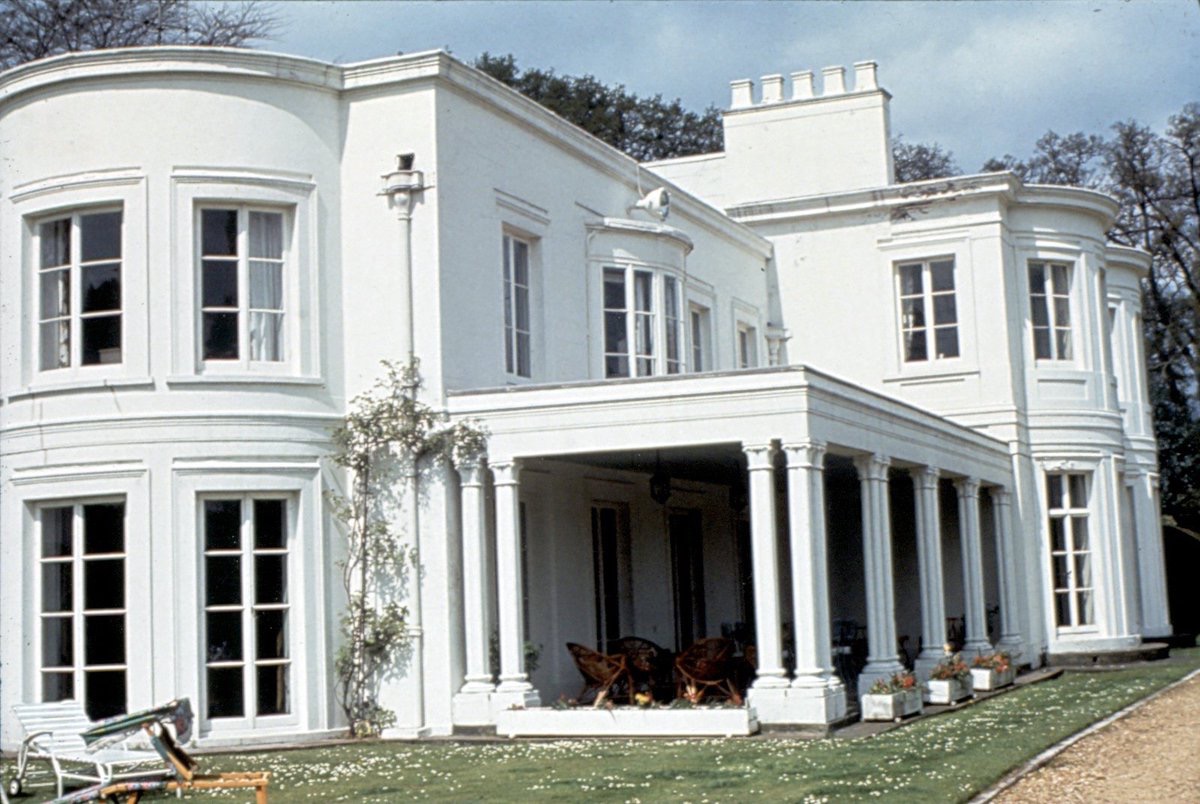 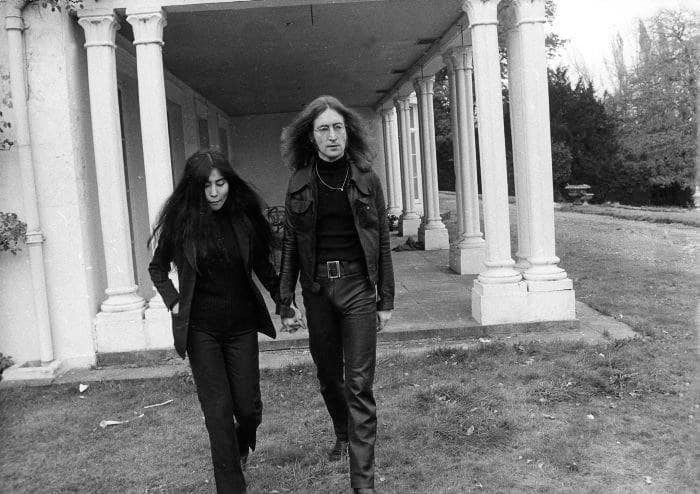 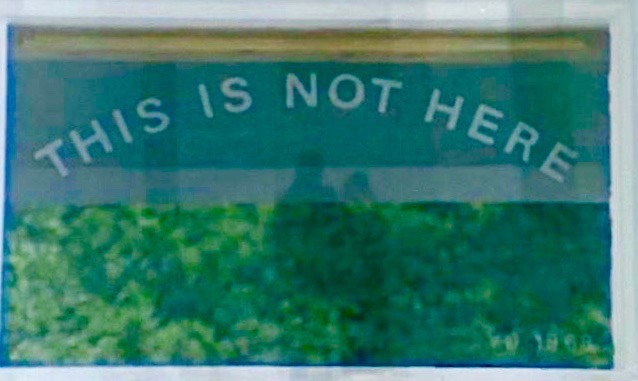 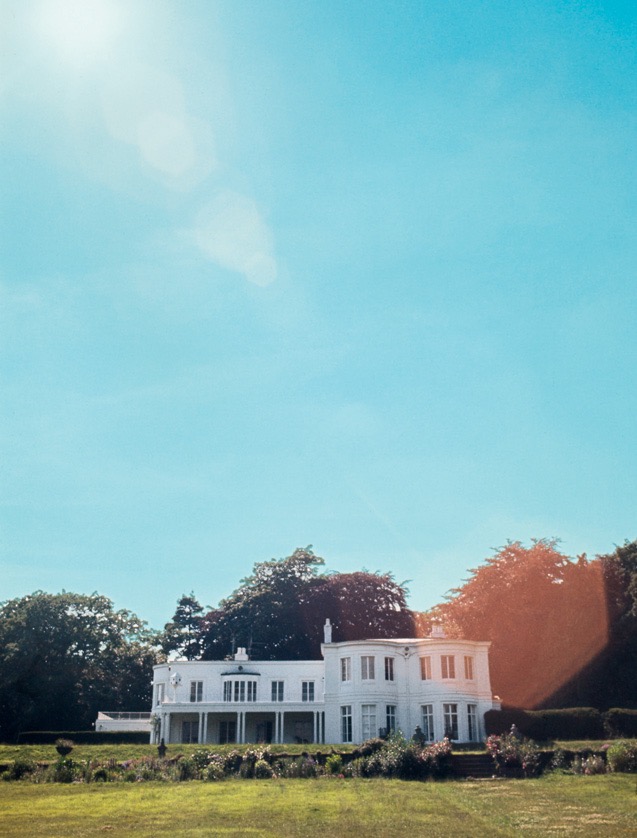 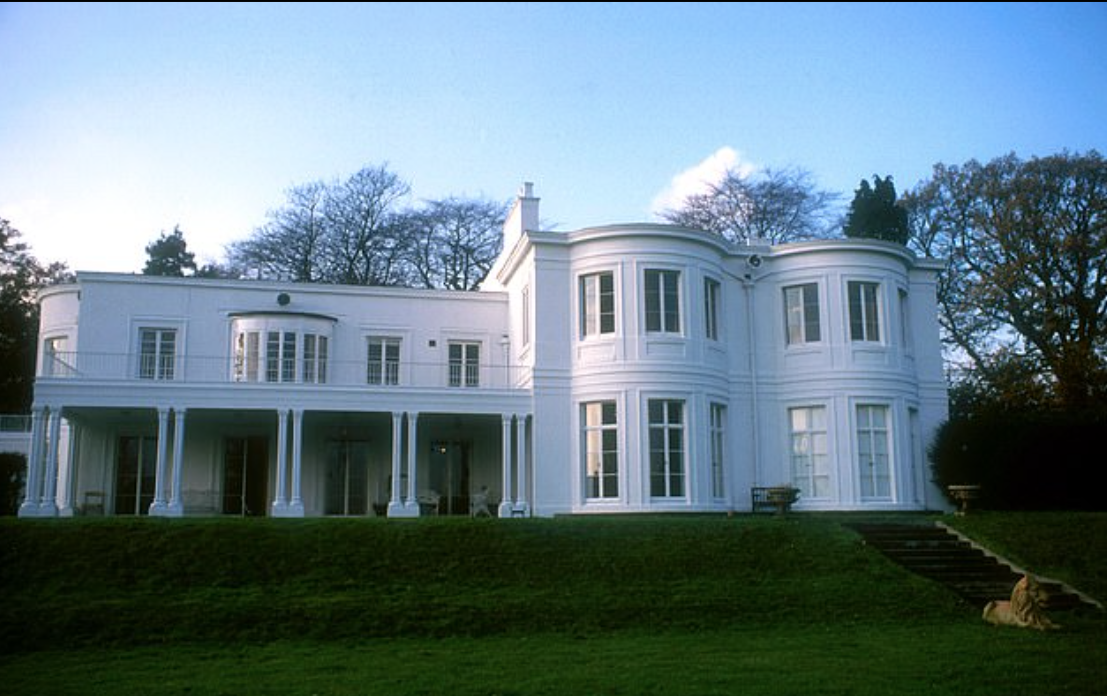 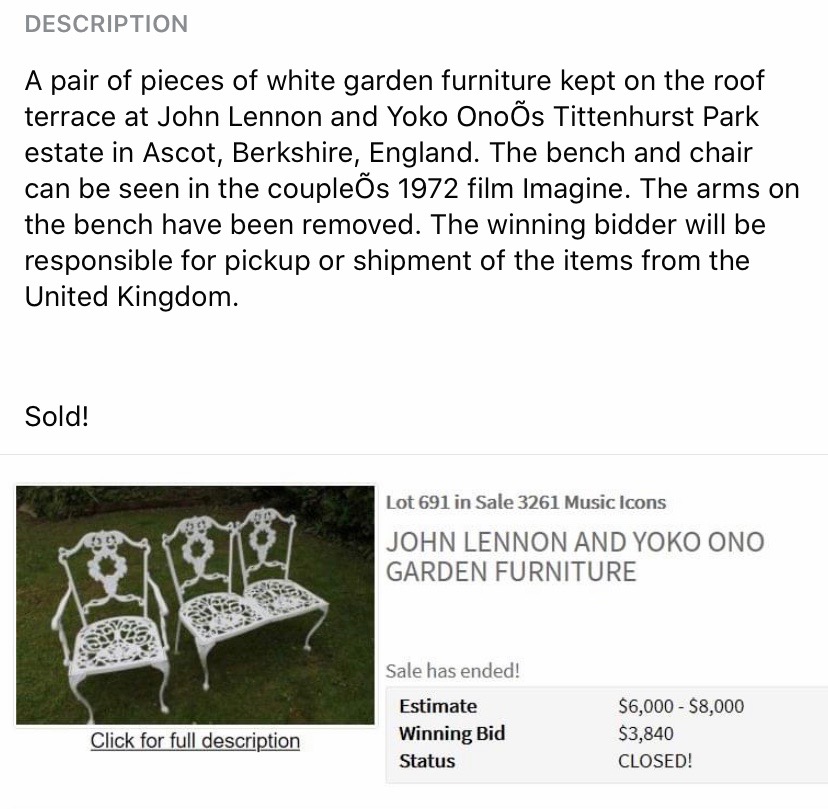 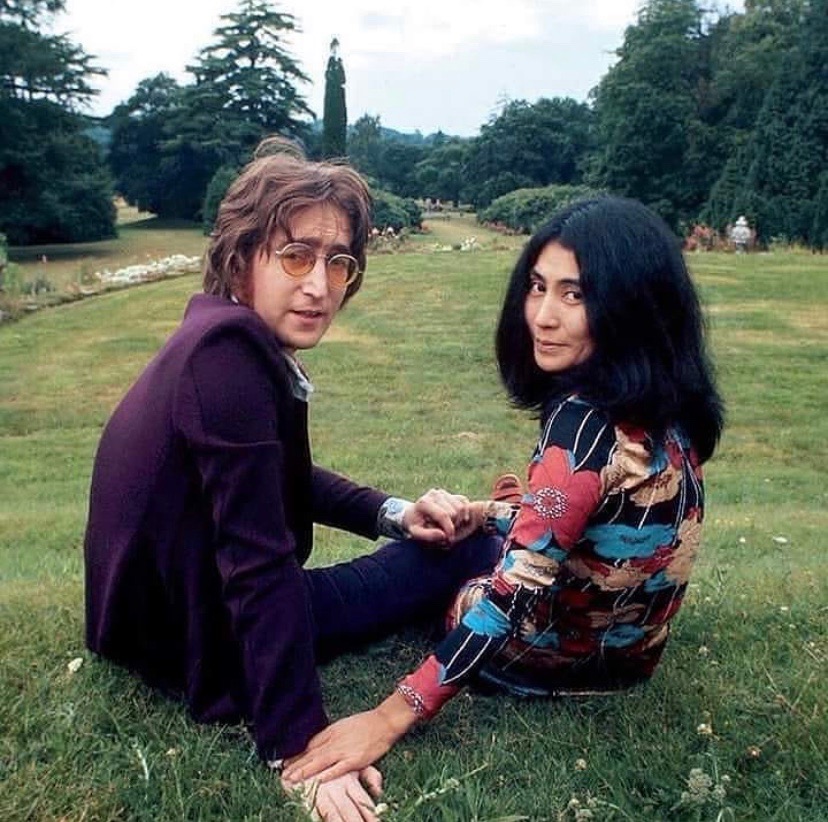 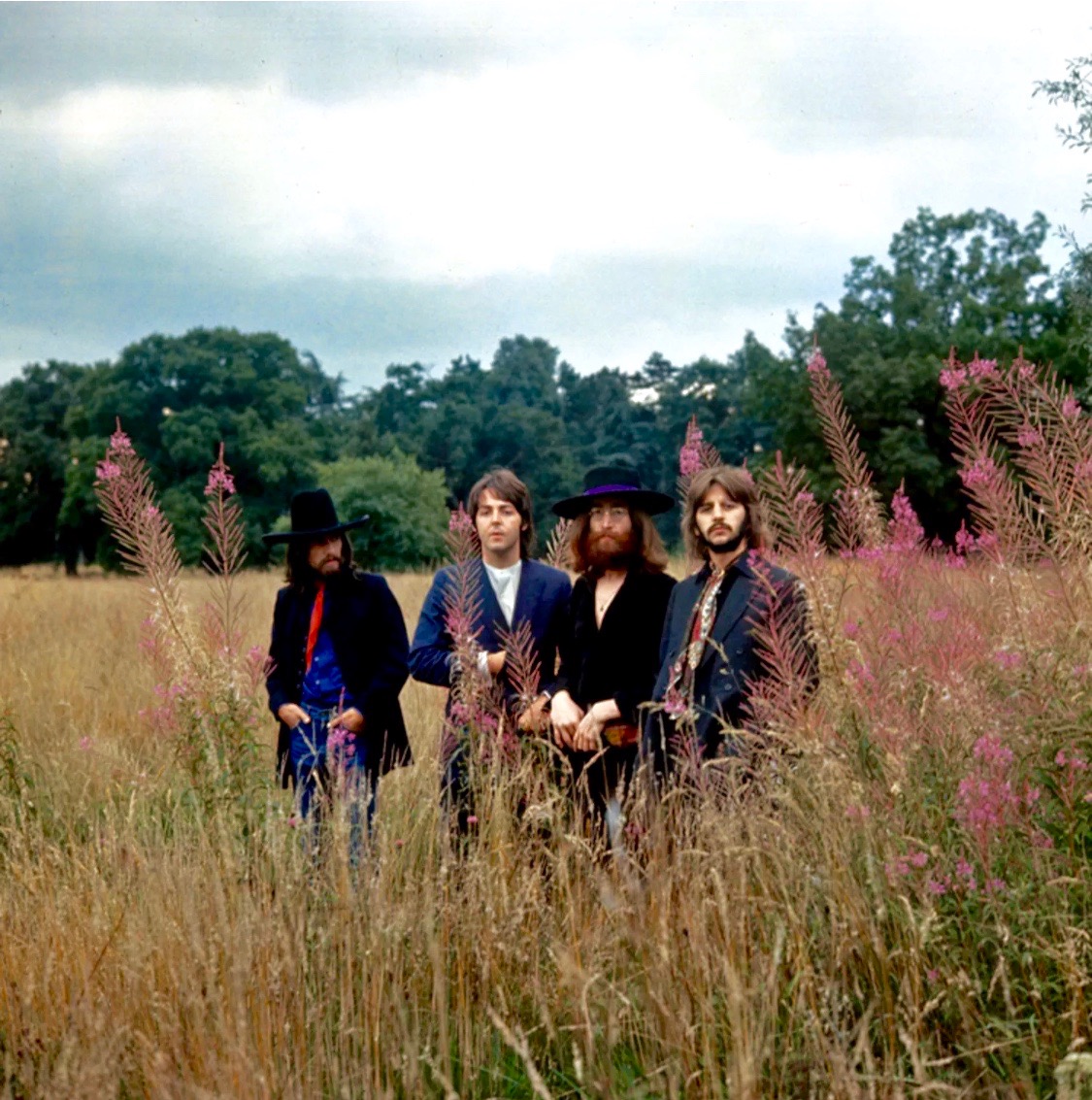 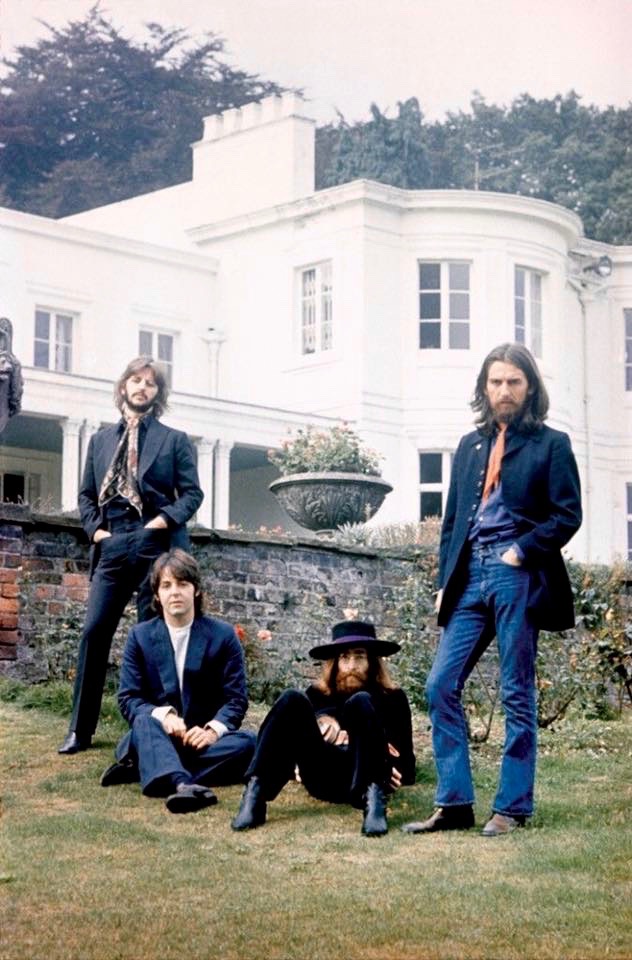 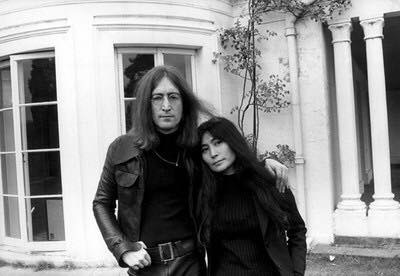 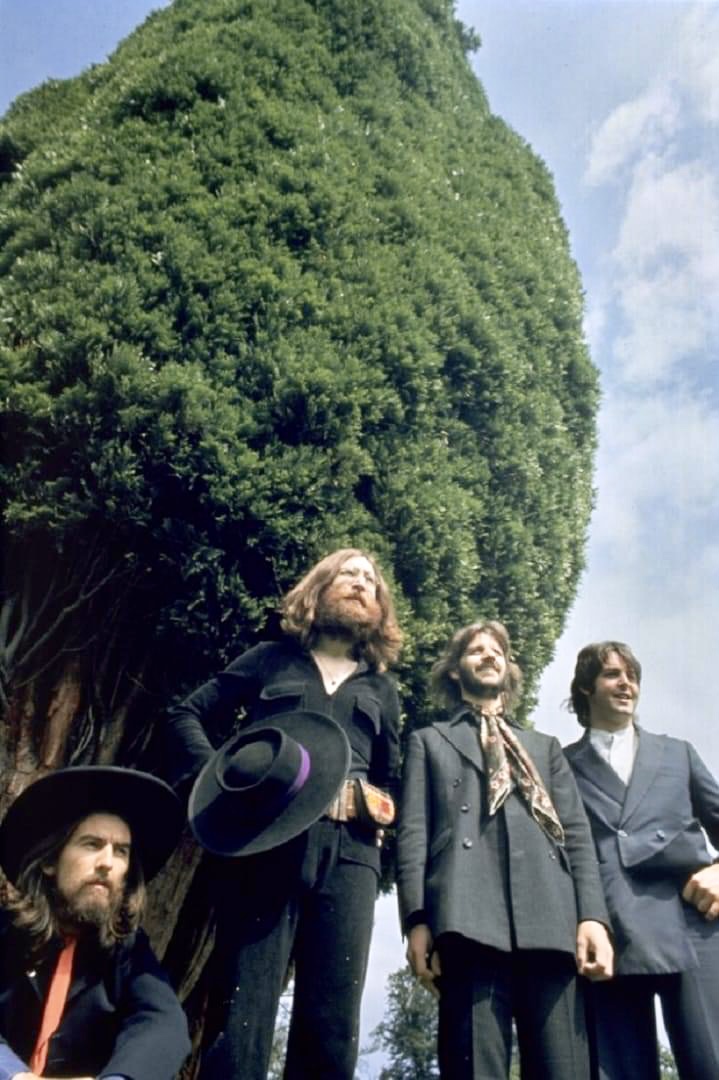 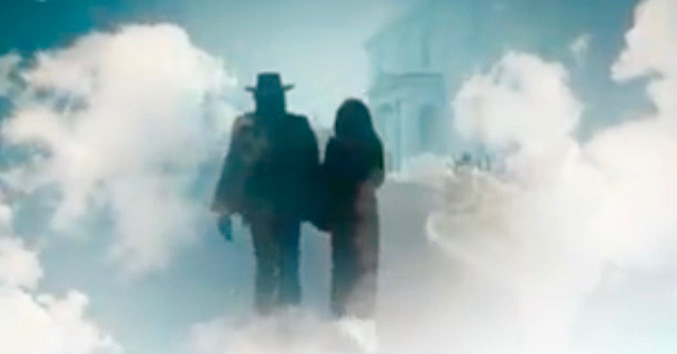 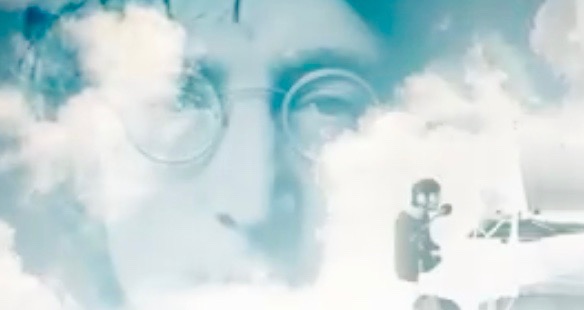