© Madeline Bocaro, 2018. No part of this site may be reproduced or reblogged in whole or in part in any manner without the permission of the copyright owner.

Welcome to ‘Suffragette City’! Feeling The Space is Yoko Ono’s feminist manifesto. The album’s theme is female liberation. Side One tells stories of individual women oppressed by society. On Side Two women unite, wake up, rise up and kick ass!

and those who are now in prisons and in mental hospitals

for being unable to survive in the male society.”

Yoko’s fourth solo album was the quick follow-up to her double album Approximately Infinite Universe which was released on January 8, 1973. Feeling The Space was released on November 5 in America (November 23 in the UK). 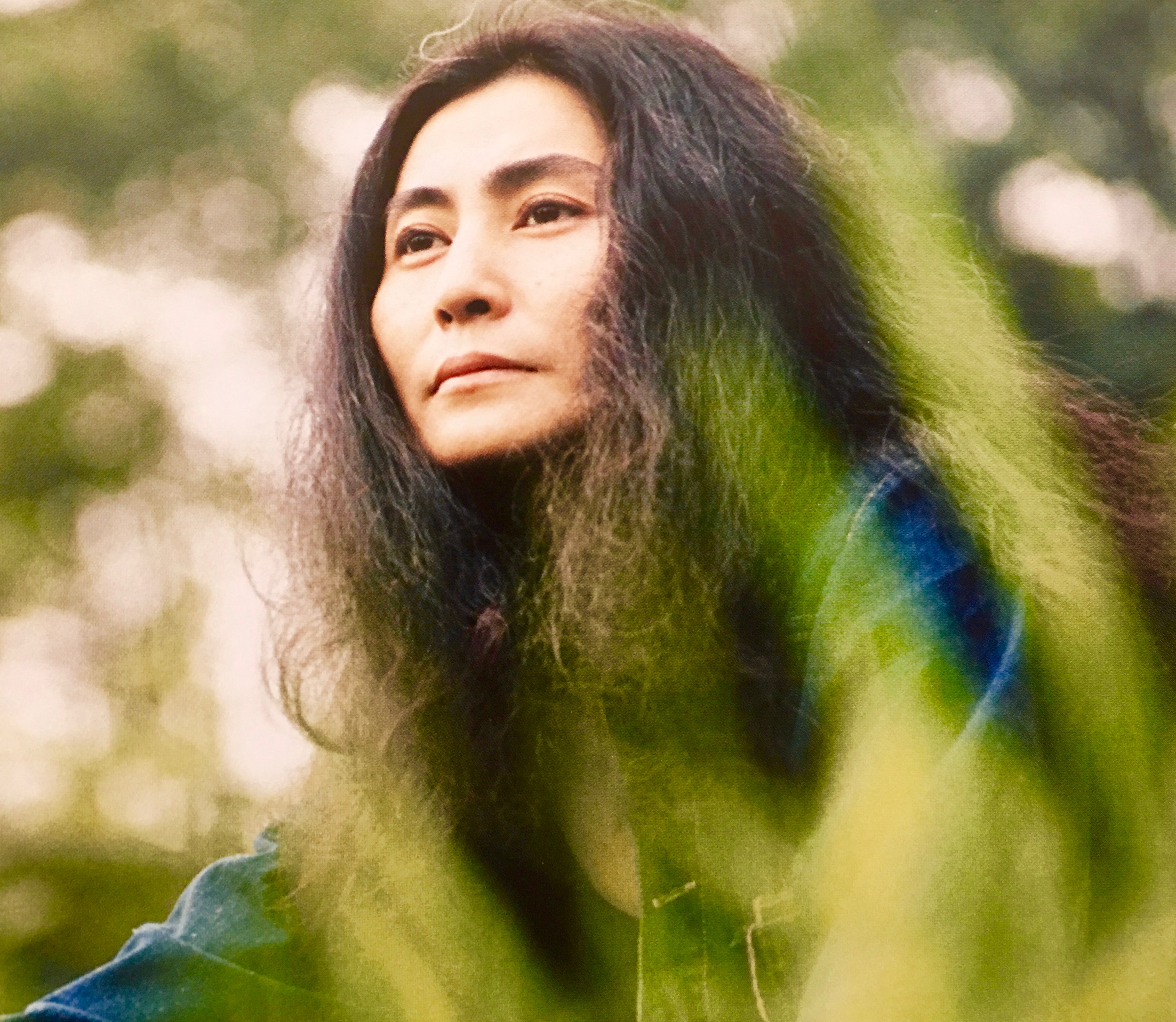 Recording began in June 1973 at New York City’s Record Plant. Originally (like AIU) it was also going to be a double set with the title Half A Windsong. That idea was shelved – one reason being the disarray of  Apple records.

The songs meant to be the album’s second half were readied for her next album, along with others that Yoko later recorded in December. The follow-up album was not released. It saw the light of day decades later in 1997 when Rykodisc finally released A Story as part of a reissue series of all of Yoko’s albums..

Yoko’s most astounding song on Feeling the Space is the thunderous, bottom-heavy rocker / anthem ‘Woman Power’. The lyrics illuminate society’s perpetual repression of women and their eventual rise to power. John Lennon’s scathing guitar rips through the original, as he was in complete agreement with his wife about women’s rights.

The lyrics were so prophetic that we recently had a very near miss of having a woman president.

Clinging to values vain and phony

…Do you know that one day you lost your way, man

Do you know that some day you have to pay, man

Have you anything to say, man

Except, “Make no mistake about it, I’m the president, you hear

I wanna make one thing clear, I’m the president, you hear”

The stripped-down version of ‘Woman Power’ (on Yoko’s 2018 Warzone album) retains its funky groove with her resonant message sung/spoken loud and clear, with a nice guitar and vocal freak-out at the end!

Yoko produced Feeling The Space. The album was engineered by Jack Douglas. The musicians were most notably John Lennon and David Spinozza on guitar, Michael Brecker on sax and Jim Keltner on drums. The female group Something Different joined on backing vocals. The male band members’ birth dates, phone numbers and vital statistics are listed in the liner notes, mocking adult film adverts and the strict desired guidelines that women’s bodies are supposed to adhere to, according to men.

Feeling The Space (also on her live tour of Japan in 1974) and Season of Glass. He also appears on John Lennon’s album, Mind Games. 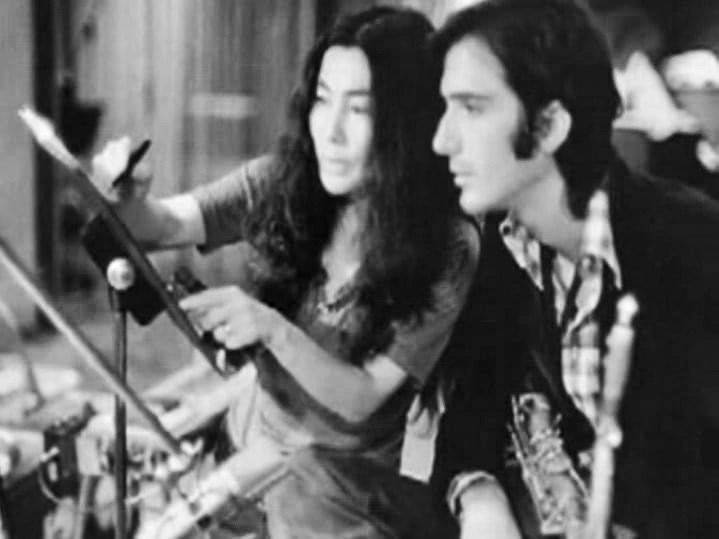 There was much turmoil in the lives of John and Yoko. John had been ordered to leave the USA three months prior in March. He appealed the immigration decision. In rebuttal, the Lennons announced the formation of a conceptual country on April 1st (April Fool’s Day). Nutopia has no land, no boundaries, no passports, only people. Nutopia has no laws other than cosmic. Yoko was a distraught mother, desperately searching for her young daughter Kyoko who disappeared with her ex-husband. Amidst the stress, the Lennons temporarily separated. John went to Los Angeles (his so-called lost weekend lasted 18 months).

When Yoko’s month-long sessions ended, John immediately enlisted Yoko’s session musicians to record his album Mind Games, also at Record Plant. Both of their albums were released on the same day, November 5th (in America).

John plays guitar on ‘Woman Power’ and ‘She Hits Back’. He also sings backing vocals on ‘Men, Men, Men’ – a playfully condescending song which reverses male chauvinism back onto the guys – giving them a taste of their own medicine. (Putting men in their ‘rightful position’ was also the theme of ‘What a Mess’ on Yoko’s previous album AIU.) In the credits, he adopts the named ‘John O’Cean (‘Not for sale’).

Feeling The Space consists mainly of ballads; ‘Growing Pain’, ‘Yellow Girl’ the beautiful ‘Run, Run, Run’, ‘If Only’ and ‘Angry Young Woman’ (which Yoko performed this on the Mike Douglas Show during a solo TV appearance in November 1973).

The melancholy melody of ‘If Only’ was later reprised for the single ‘Yume O Motou 夢をもたう(Let’s Have a Dream)’ released only in Japan to promote Yoko’s August 1974 tour. A couple of rockers include ‘Straight Talk’ about total communication and ‘She Hits Back’ in which a woman blatantly deflects all that is thrust upon her by male society.

‘A Thousand Times Yes’ is Yoko’s eternal mantra – about the power of the word ‘Yes’ and its ability to defeat negativity, although it is always a struggle.

The eerie ‘Woman of Salem’ refers to the witch trials. During a live performance on June 2, 1973 for the Feminist Planning Conference, Yoko spoke the words below in introduction to the dirge-like ‘Coffin Car’ (in which a woman lives life as if she were the walking dead).

‘Coffin Car’ is sampled and slowed down along with new vocals and effects on a track called ‘The Paths’ which is only a CD included with the book Yes, Yoko Ono published in October 2000 (not to be confused with ‘The Path’ (5:43) on Onobox which is also a bonus track on the 2017 Chimera reissue of Fly). Yoko’s voice travels back and forth between your ears!

…I was living as an artist and had relative freedom as a woman and was considered a bitch in this society.  Since I met John, I was upgraded into a witch and I think that that’s very flattering.

Anyway, what I learned from being with John is that society suddenly treated me as a woman…who belonged to a man who is one of the most powerful people in our generation. Some of his closest friends told me that probably I should stay in the background, I should shut up. I should give up my work and that way I’d be happy.

I was lucky. I was over 30 and it was too late for me to change. But still… I want to say this to the sisters because I really wish that you know that you are not alone.

I consider myself a very elegant and also an attractive woman, all my life and suddenly because I was associated with John I was considered an ugly woman, ugly Jap who took your monument or something away from you.

That’s when I realized how hard it is for women. If I can start to stutter being a strong woman, and having lived 30 years by then, learn to stutter in 3 years being treated as such, it is a very hard road.”

Yoko and the Plastic Ono Super Band previewed songs from the album by playing a week-long residency (October 3 – 28) at Kenny’s Castaways in New York City. Yoko performed twelve (not only sold-out but over-crowded) shows. John was in Los Angeles at the time. Although she looked stunning all in black, wearing velvet hot pants and thigh-high boots, Yoko wore them in mockery of men’s expectation that a woman wearing such a thing should be demure. The crowds – mostly men, clamored for her autograph after each show.

Remnants of the intended double album were ‘O’ Oh’ and ‘Yes, I’m a Witch’ which were to appear on Yoko’s next album, A Story. However, they were not released until decades later. The intended track listing was released in 1992 as Run, Run, Run (Disc 3) on Rykodisc’s Onobox CD set.

‘Dogtown’ and ‘Will You Touch Me?’ were also omitted from Feeling The Space. They were  slated for A Story and were later re-worked for Season of Glass (1981). ‘Hard Times Are Over’ was updated for Double Fantasy in 1980.

Two songs from the Feeling The Space sessions; ‘Yume O Motou 夢をもたう(Let’s Have a Dream)’ and Joseijoi Banzai’ were issued in Japan as singles when Yoko toured there with her Plastic Ono Super Band in August 1974.

The ancient Egyptian themed artwork also includes Yoko’s essay, Feeling The Space published in The New York Times on August 24, 1973. In it, she states,

“There was always such a space around me.”

Still, at age 85 Yoko continues her steadfast fight for women’s rights alongside her never-ending campaign for peace, with her silent partner John beside her.

“In my mind, I’m really an eternal sphinx.”

Some of Yoko’s eternal feminisms:

Women are still not equal to men. But do we want to be equal to them? I think it is better to pursue higher.

Equality is a very strange word, because we are basically not equal, none of us are. We want justice, not equality. I myself, do not want to be equated with men, I want to always be me.”

Society was built on male power, and women’s power was… ignored is the best word to describe it I suppose. We have been running society on one power. Half a power really. And that’s so terrible. The world needs womens’ power too.

“I Learned to Stutter/Coffin Car” (Live) 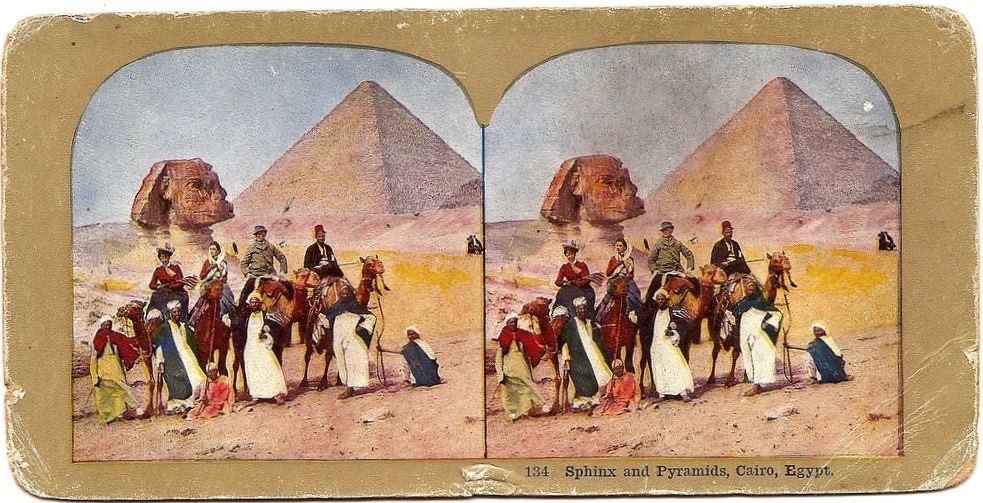 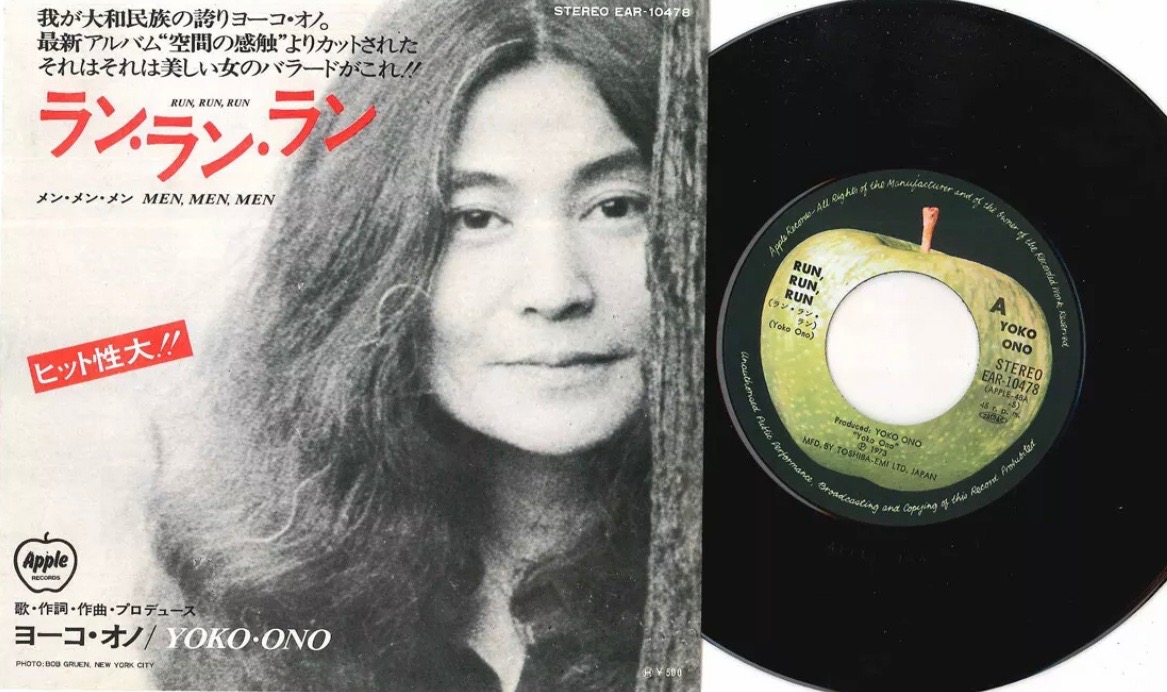 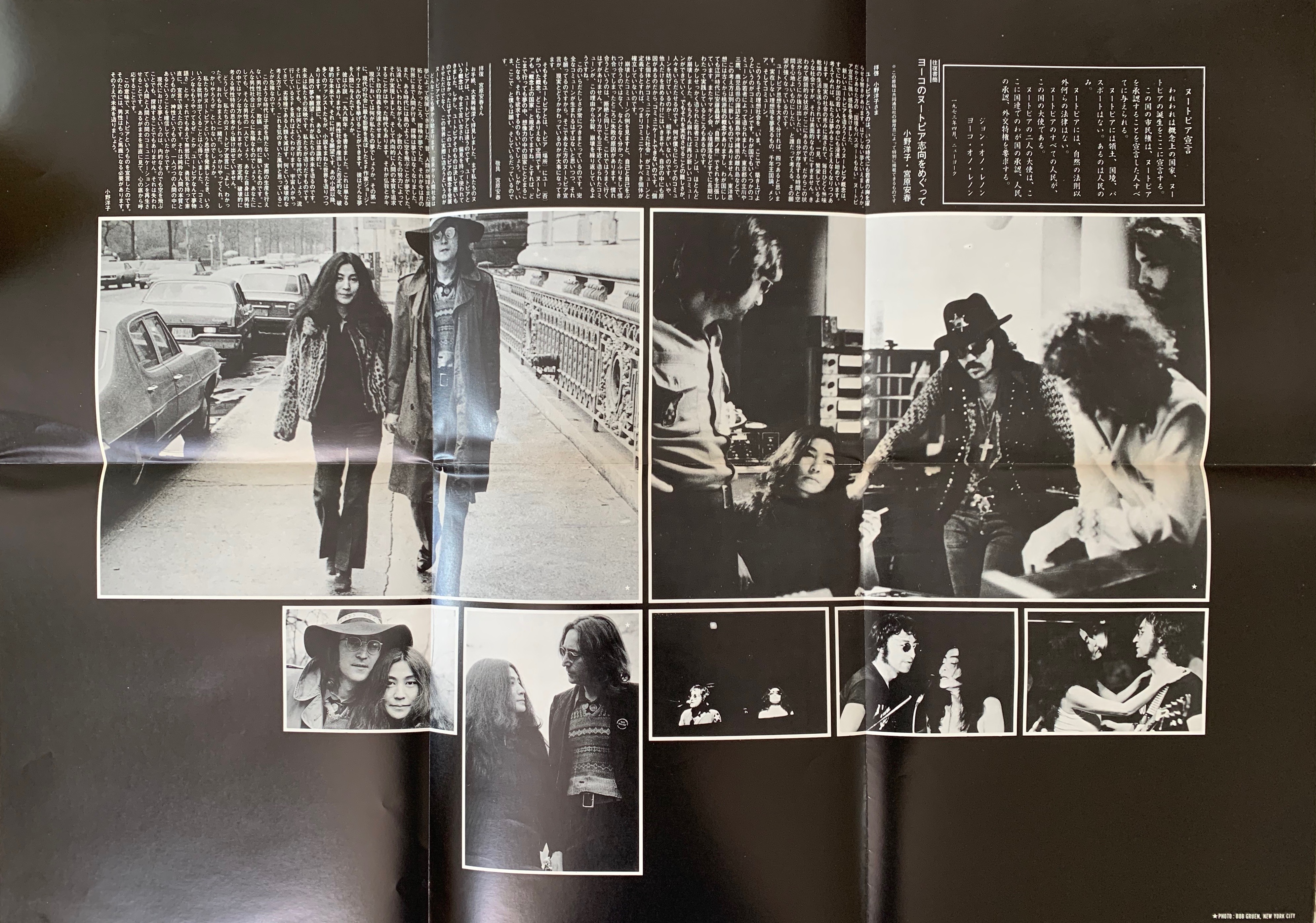 (Above: Japan Promo copy of album with rare poster) 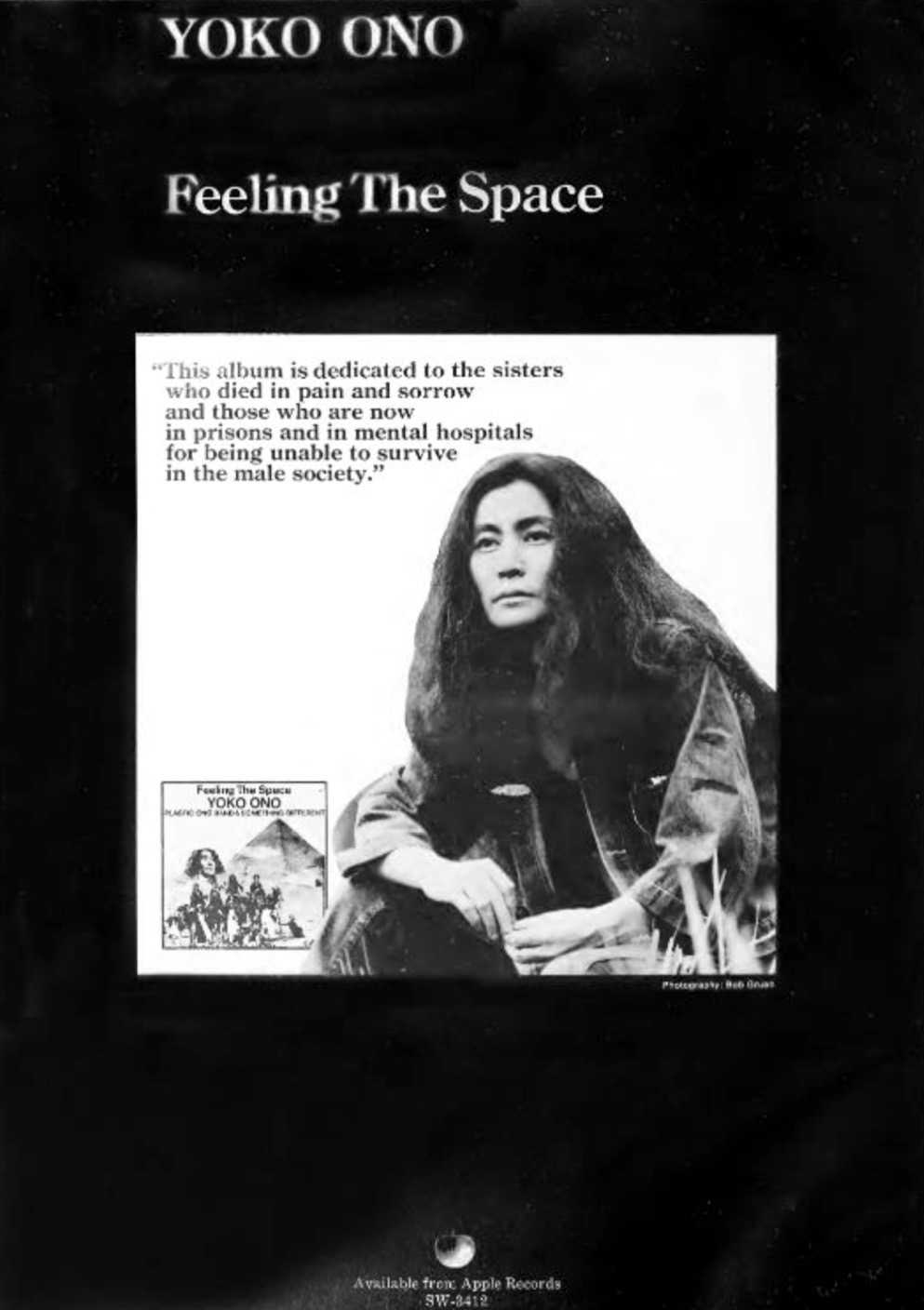 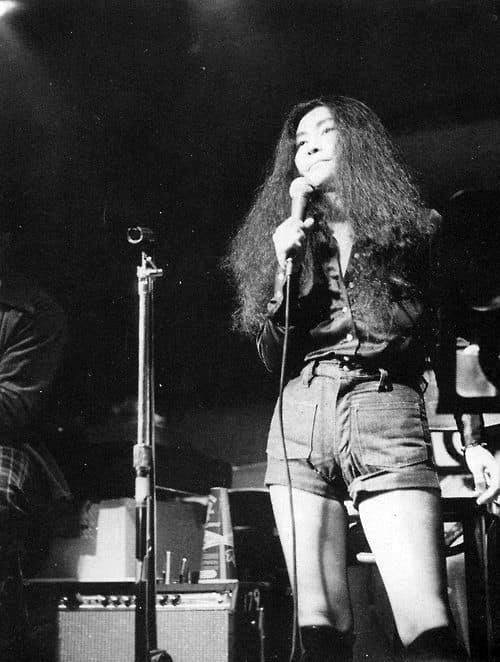 John & Yoko visited the site of the Salem witch trials in June 1973.

“Lennon was asked how much longer he planned to stay in Salem.

“About five minutes,” was the response.” 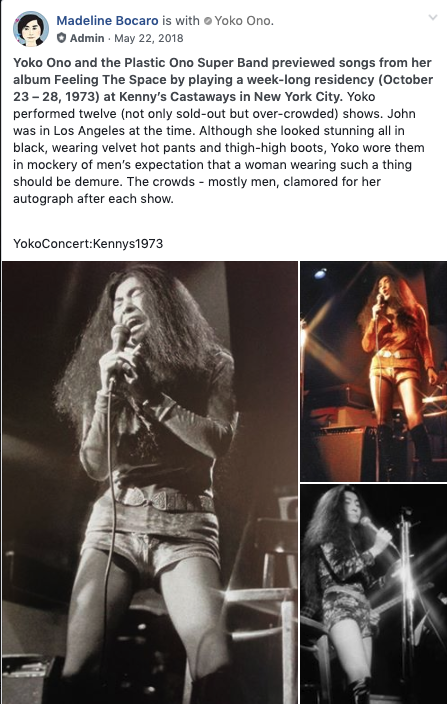 What happened to the Sphinx’s nose?

2 thoughts on “Feeling The Space”