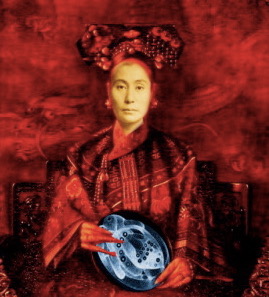 Blueprint for a Sunrise was Yoko Ono’s first album in five years, following Rising. It was released on November 9, 2001. She appears on the cover with her younger face (an Iain Macmillan shot from 1971 which also appears on the Rising album cover). Yoko is portraying the defiant and powerful Tz’u-hsi, Empress of China with whom she sympathizes and identifies for also being called a ‘Dragon Lady’ – a derogatory term for a strong woman. It is based on a 1905 oil painting of the empress by Hubert Vos.

‘We learned about her in school in Japan and she was always quoted as an example of how cruel women can be when they get power, and I totally believed it. And it was like I was in the same position of protecting a country, which was Nutopia. Which they did not like. It was a kind of conceptual country that I was protecting. I thought the parallel was interesting. There were many monstrous things that were said about me.’

“Some people do become dragon lady because they’re called dragon lady. They might just be at the verge of being something else, and you call them militarists, they’re going to be militarists. You are creating a militarist by stating that. He is many things, whoever you said. He might be a father, he might be a husband. He might be a little boy who remembers about his mother dearly, et cetera, et cetera. His heart is ticking, it’s the same heartbeat as yours.”

Yoko once again takes a feminist stance to show her sisters who continue to suffer in silence and ignorance of their power – directing them toward their fullest potential and freedom. In the liner notes, Yoko writes, “Sometimes I wake up in the middle of the night hearing thousands of women screaming. Other times just one woman tries to talk through me.” The album is also a memoir of the struggles that Yoko endured as a child in Japan during the WWII  bombings of Tokyo.

The lyric booklet features some of Yoko’s organic Franklin Summer drawings. The album is a montage of live recordings, samples and remixes of previous recordings. It starts with a lengthy two-part track ‘I Want You to Remember Me’. This features the riff from ‘Coffin Car’ (Feeling the Space 1973). The heartbeat, which is present in much of Yoko’s music pulsates intermittently throughout this piece. The beat was introduced to her by John Lennon when they began making music together. Yoko plays both parts; a dominant threatening man and a pleading woman – in a disturbing, violent domestic quarrel.

“The first track can’t be too long.’ – that’s the kind of thing John was always saying to me… But I wanted to just do it. I’ve been noncommercial from the beginning.”

The sad ballad ‘Is This What We Do?’ is a bolero with Spanish style acoustic guitar. It’s not only about empty promises and mistreatment of women by the male species who see them as a threat to male power. It’s also a warning to us all about taking nature and our environment for granted. The song gradually rocks harder as Yoko wordlessly vocalizes.

The jazzy, funky ‘Wouldnit “swing”’ is reprised from Rising. (1995). It’s a playful and trippy, yet the message is dark – about victims of murder, rape and abused children who dream of transformation into much more glamourous identities (a heroine, a star in the sky…) voicing imaginary freedom  from the clutches of a husband, an abuser or a parent.

But I’m still thinking
Wouldn’t it be nice to be a star?

Soul Got Out of the Box is a gloomy and musically plodding song which evolved from an older poem “The soul got out of the memory box and placed itself on an unpaved road.” It speaks of the uselessness of words as we face doomsday.

A cool lighter 2007 remix by Alaska’s alt rock band Portugal. The Man appears on Yes, I’m a Witch Too.

Two tracks were recorded live at Japan Society in NYC. ‘Rising II’  is 13-minutes long. Over a gradually swelling two-chord trance, Yoko’s emotive voice at first sounds broken and later triumphant.  This is an extraordinary live performance piece which resembles a religious service. After all, it is about rising together. Some of the lyrics are in Japanese. It begins with an accusatory soliloquy addressing the abusers and all the pain that she has endured in life. Yoko floats way up into the universe where she sees and loves all in forgiveness.

‘Mulberry’ returns to memories of searching for food with her siblings as a child during WWII. On this 8-minute live track, she sings alternately in English and in Japanese, choking, breathing….  It was a track which Yoko found when looking through old tapes for bonus tracks for her (1997) Rykodisc album reissues – just her and John jamming on voice and guitar. (The demo tape recorded at Queen Charlotte’s Hospital was released on Ryko’s Life with the Lions CD reissue). Now she is jamming with their son Sean

A live performance of ‘Mulberry’ on April 3, 1997 at Tramps in New York City was the most incredible performance I’d ever seen her give. It was like seeing one of those comets that come by every 2,000 years and can only be seen for an instant.

Yoko introduced “Mulberry” by saying, “Me and John were having an argument as usual.  He was being English and I was being Japanese.  He said, “Iris is English” and I said, “No, it’s Japanese!”  and he said, “No it’s English!’  Then he said, now Mulberry – that’s English!”  And I remembered when I was in Japan after the war and there were big fields and the sky was blue and the sun was setting behind the mountains and I had to feed my little brother and sister, and I picked the mulberries.  And I had to walk home alone and I was scared or something.  So me and John recorded Mulberry.  It will be a bonus track when Ryko disc releases 11 of my solo albums.”

“Mulberry” live was totally improvised and it was magical.  Sean was getting every kind of noise he could out of the guitar, playing it with all kinds of objects including a violin bow, tightening the strings until they almost broke, destroying the guitar. Yoko was on her knees singing/screaming.  Sean lay on the stage on top of the guitar playing away…and at the end, Yoko looked at him with pure joy on her face. I knew what she was thinking. That was the greatest moment… she realized Sean could really jam with her just the way John did.  It was incredible.  Backstage I told her that ‘Walking On Thin Ice’ sounded great – and before I could mention it, she said, what about “MULBERRY!!!”  I told her that I saw her face light up at the end of that. She squeezed my hands and said she wanted to play live again “IMMEDIATELY”!  I’m so glad that this performance inspired her!

We had a nice laugh when Yoko told me that one of her favorite lines from a critic was when he called ‘It’s Time for Action’  “It’s Time for Aspirin!”  There is a manipulated guitar sample from ‘Woman Power’. The lyrics, “It’s time for action, there’s no option…” are spoken in many languages by different women. Yoko’s later songs on Between My Head and the Sky; ‘Bad Dancer’ and ‘The Sun Is Down’ draw heavily from ‘It’s Time For Acton!’. It ends with a sample from ‘You’ (Fly 1971).

‘I’m Not Getting Enough’ has an upbeat melody and a reggae beat. However, the lyrics emphasize ‘feeling black and blue’ as the times are getting heavy again, as time ticks away.

Yoko starts off calmly with the beautiful ballad “I Remember Everything”  building to a beautiful crescendo. Her sweet memories of John include the wind and the clouds.

“You were smiling / My heart was beating”

The song was written for the play Hiroshima. Yoko performed ‘I Remember Everything’ live at the Itsukushima Shrine in Japan 1995. A video montage accompanies this gorgeous song from Yoko’s 2001 album Blueprint for a Sunrise.

The two-note drone of ‘Are You Looking For Me?’ is deliberately agitating and disturbing. It utilizes the droning sitar loop from the track ‘Greenfield Morning (I Pushed an Empty Baby Carriage All Over the City)’ on Yoko’s first solo album, Yoko Ono Plastic Ono Band – 1970). It also samples the same chirping birds. The track also has the same hysterical feeling of ‘No, No, No’ from Season of Glass (1981) as Yoko breathily vocalizes. She is at once goddess and devil, air, fire, water, mirror.

The twittering of birds abruptly cuts off at the end.

Listen: ‘Are You Looking For Me?’ https://www.youtube.com/watch?v=Syz0mKC21l8

Alternate version (From the CD “Blueprint for a Sunrise” that came with the book Yes, Yoko Ono in 2000).

In the album’s liner notes, Yoko writes about this touching story,

which you can watch her telling here…

Transcript:
What a beautiful place that u decided to have your ceremony.
And I’m very touched because I always think these days that it’s terrible that we are destroying the culture that we built and it’s very important that we keep things around us that are beautiful.

Well anyway, to my fellow artists from Pratt Institute,
During WWII, St. Petersburg was surrounded by German army and from that in Moscow. It was terrible. But finally, there was no food, no heat – just the sound of German bombings.

The radio DJ tried to cheer people up by playing music, talking and cracking jokes. Eventually he also became too tired to keep the show going and just let the metronome tick live on the radio. And people had no more strength either to do anything but just lie down and listen to that metronome ticking. That’s how they kept their sanity and survival. And I think that this DJ was an artist.

I think that art is not about creating, but about being creative in changing the value of our lives. And I have gone a few years doing just that.

My life was art, and art was my life.

So let’s together become the metronome for this very troubled human culture, or human race. And we can make it!

We’ll make it, we’ll do it together and keep our sanity and make it work.

I love you! Thank you.

Art is a way of survival.

I present to you my metronome,

my blueprint for a sunrise 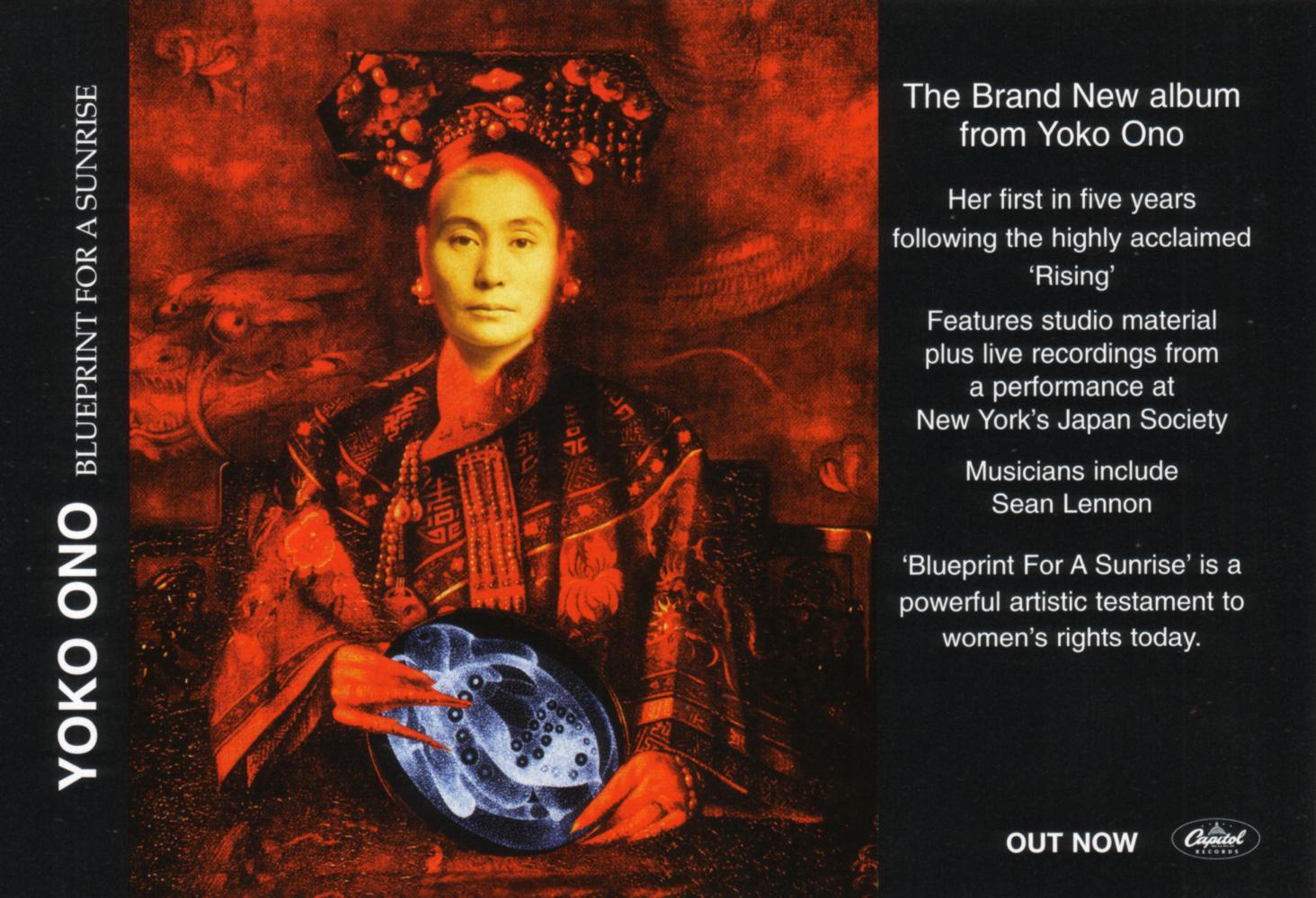 Blueprint for a Sunrise

I Want You To Remember Me “A”

“Is This What We Do”

Soul Got Out of the Box

I’m Not Getting Enough

Are You Looking For Me?

*The CD is currently out of print.

One thought on “Still Rising: Blueprint for a Sunrise”