Newlyweds John & Yoko arrive in rainy Amsterdam to begin their Bed-In for peace staying in bed for a week in Room 902 at The Amsterdam Hilton from March 25-31 1969. 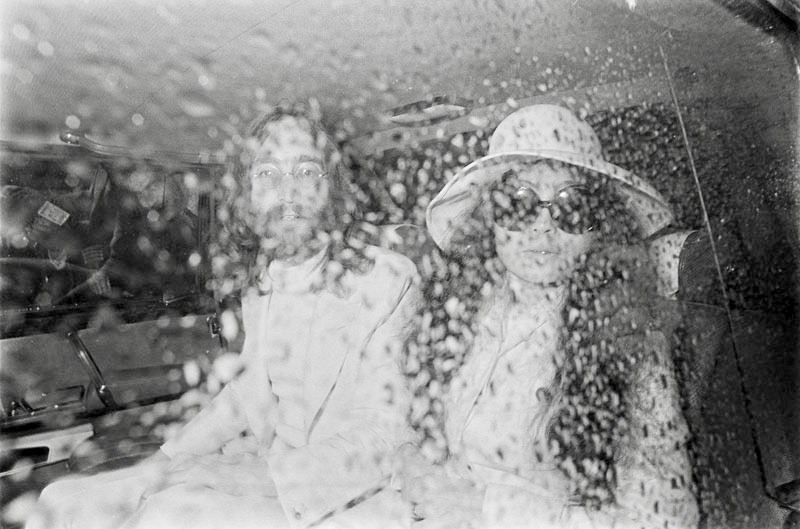 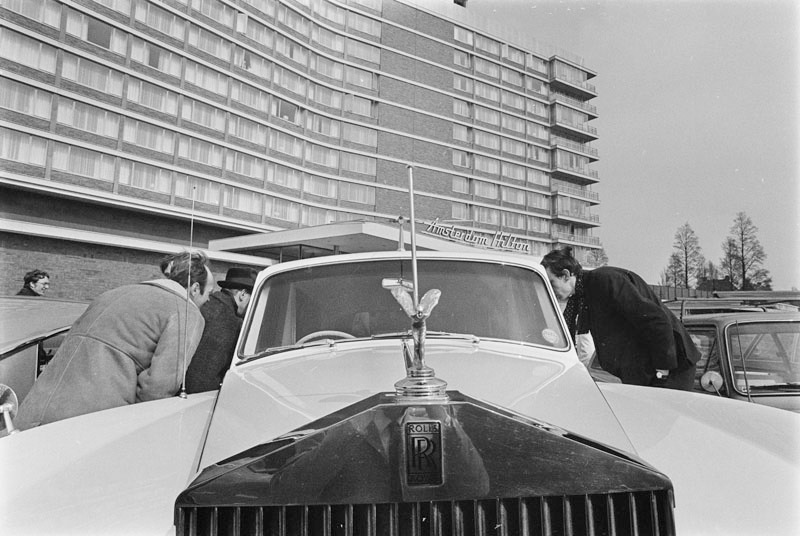 “Bed-ins are something that everyone can do and they’re so simple. We’re willing to be the world’s clowns to make people realize it”.

Reporters questioned why Yoko was not wearing a wedding ring.

Yoko: It was too big, so it had to go to be altered. It fell off my finger so he drew this ring on instead. I thought it was a lovely thing for him to do.

John: “It’s unlucky not to wear a ring but it wasn’t because of superstition that I drew it. It was just a romantic thing to do.” 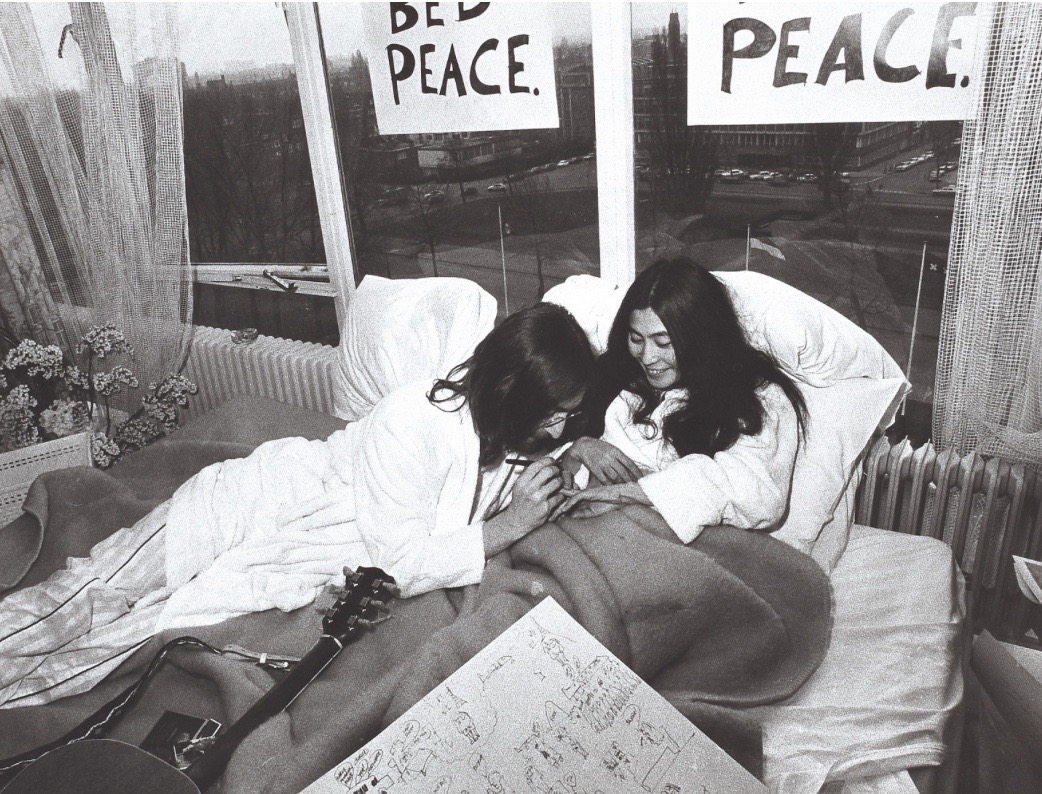 “There we were like two angels in bed, with flowers all around us

and peace and love in our heads.” 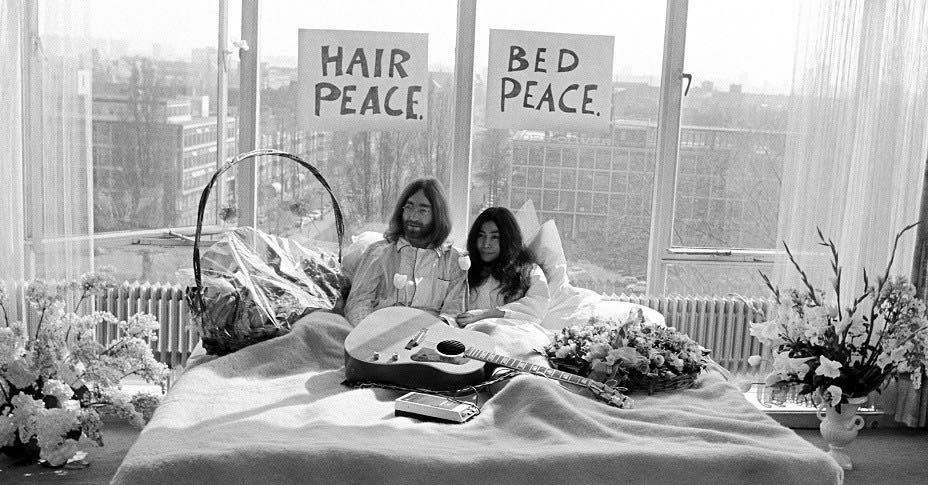 Intermission.  The linens must be changed! 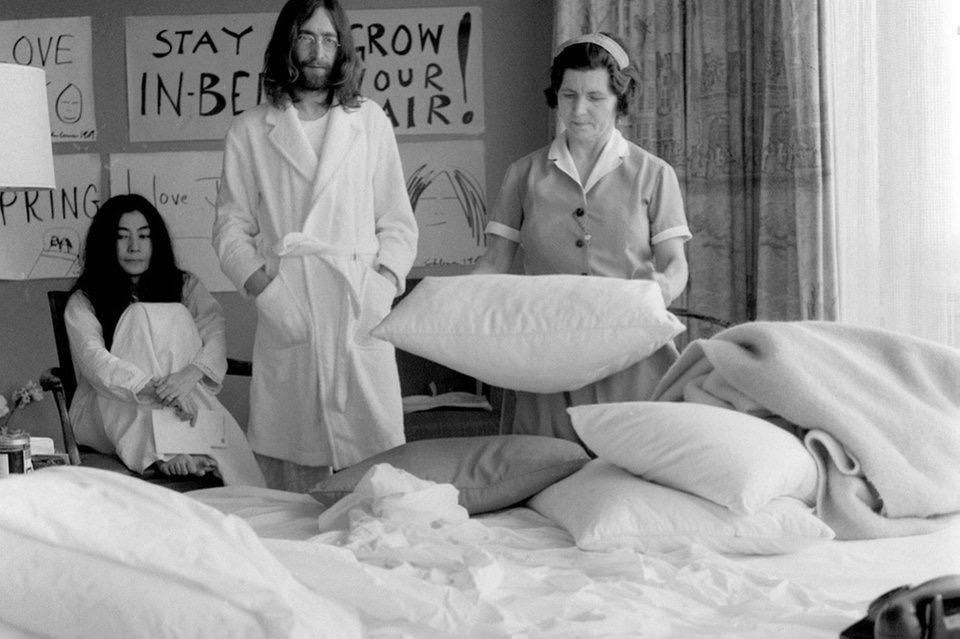 John & Yoko were made honorary members of

The Butterfly Club orchestra who performed for them on this day, 50 years ago.

They were given butterfly necklaces. 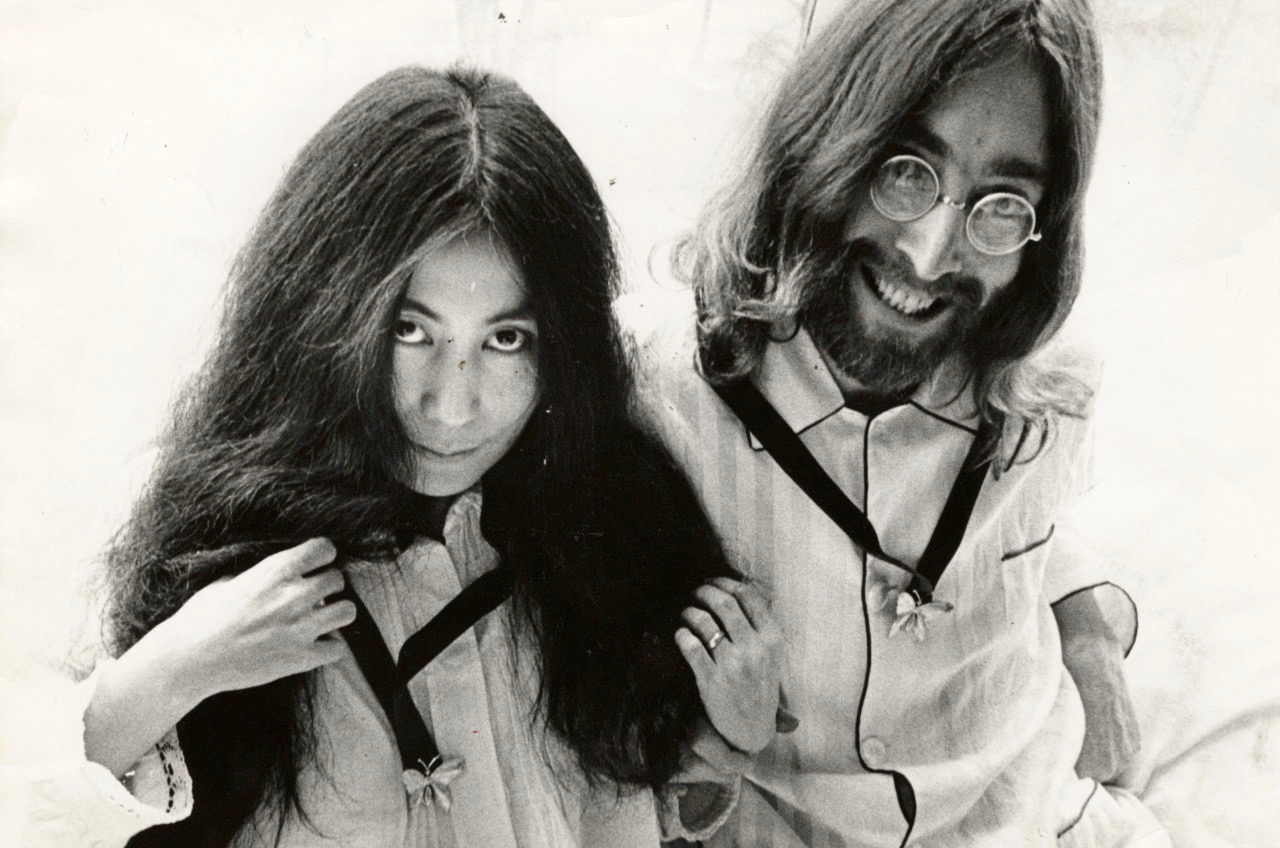 Hello. This is Yoko. 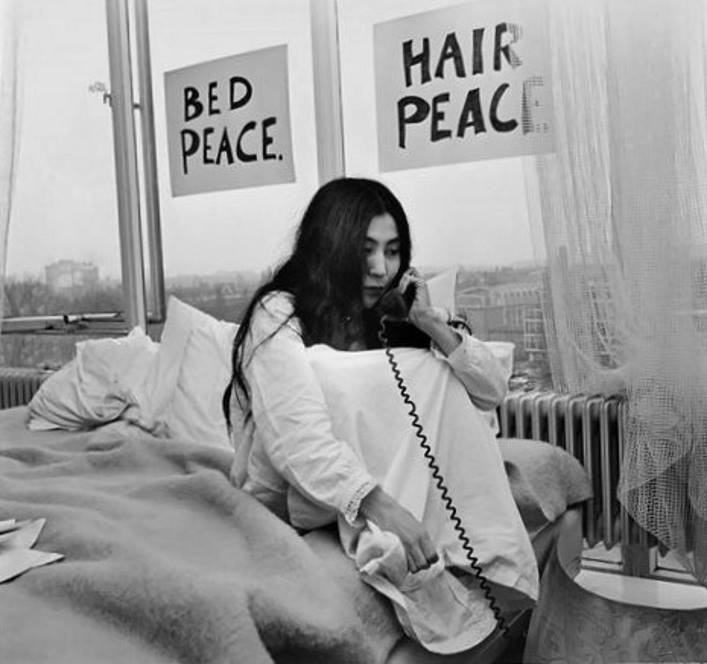 The Lennons dined on macrobiotic food and Campbell’s Soup!

Back to the Future!

Yoko: So let’s go back to the future, you know. So that’s why we’re here. We want to talk mainly to the young people all over the world because those are the people who are going to be the next generation. They’re going to be the next world, you know, and we just want to say we are with them. We are not preaching or anything like that. We want to be with them and we’re with them and in our way, we’re just announcing that we’re open to all invitations or suggestions or anything to work for the world peace, you see, and we’re doing it in our own way, which we think is the best for us and also the young people have to realise that this is just as bad as before the Second World War or right in the middle of it, you know, that everything, all the violence that is happening in the world now are our responsibility and if we don’t really realise it and immediately start something, action, you know, it’s going to be bad, you know. And it will be exactly like you said; One morning, we find in the newspaper, that the whole world is going to disappear, you know. – “Amsterdam 1969” 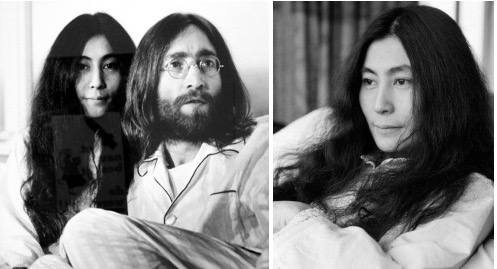 When John and I were looking at the moon one night from our bed. 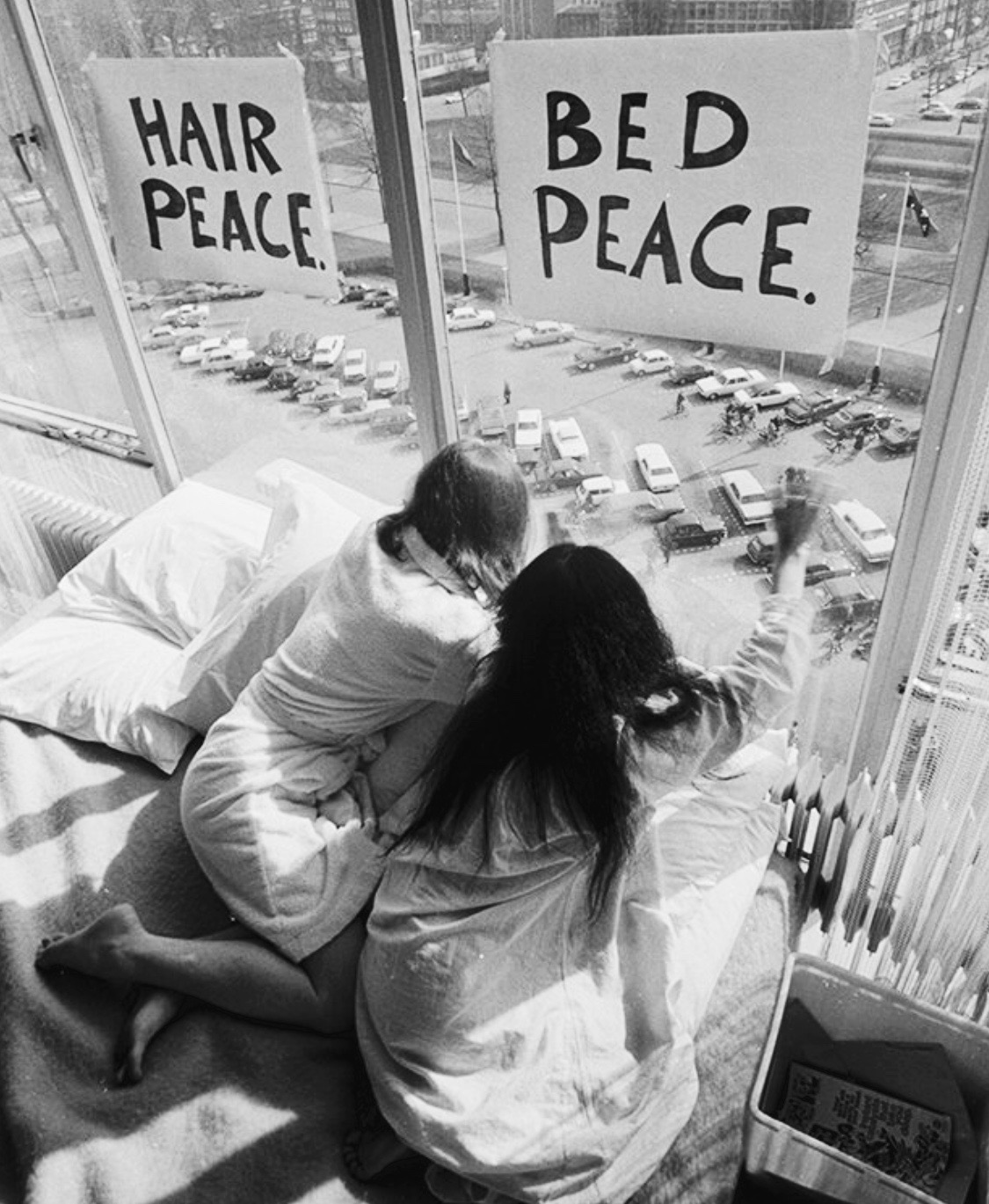 “I feel that, these days, there are more activists in the world. I mean, most people are activists now! Isn’t that amazing? That didn’t happen when John and I were doing it. We just didn’t feel like there were that many people with us. But now the whole world is activism! It’s great!”

The Hilton Amsterdam is now an iconic attraction in the city.  John & Yoko occupied the presidential suite – Room 902 at the time. The room number has since been changed to 702.  It is now called The John and Yoko Suite, for €1,991 per night, including breakfast.

Here is a sweet postcard that Yoko sent me in 1991. It’s John’s drawing based on this Amsterdam Bed-in photograph. She wrote on it, “Give Peace a Chance (again!?) Love, Yoko Feb. ‘91. 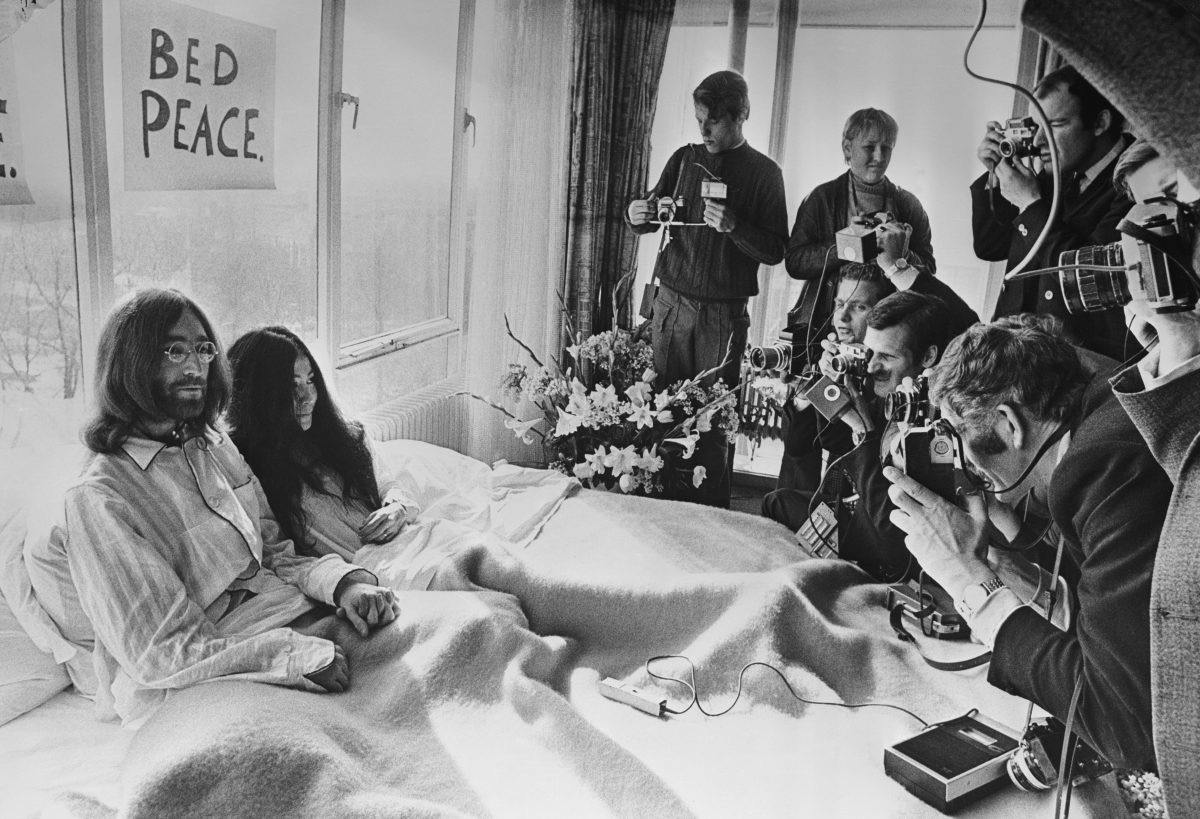 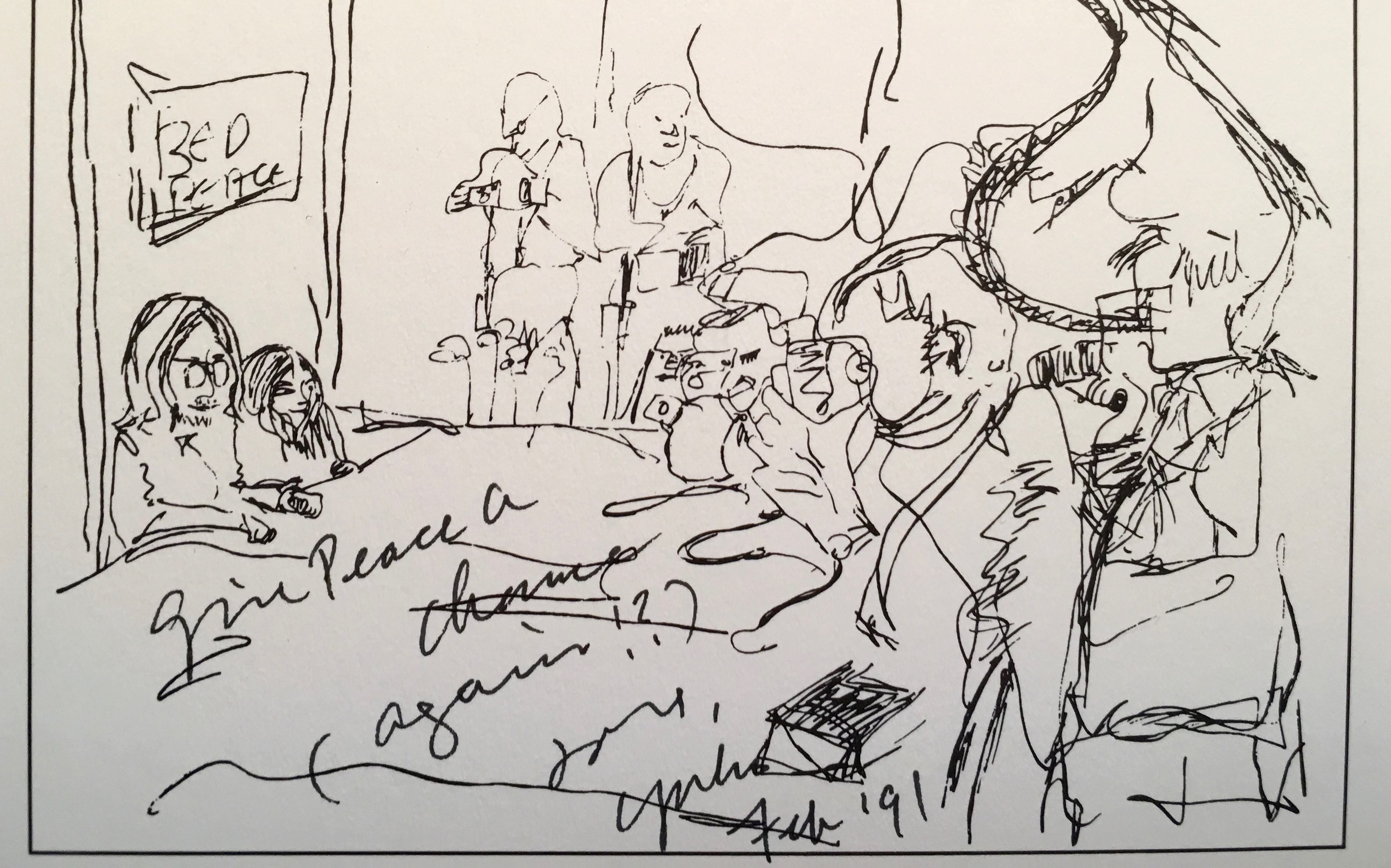 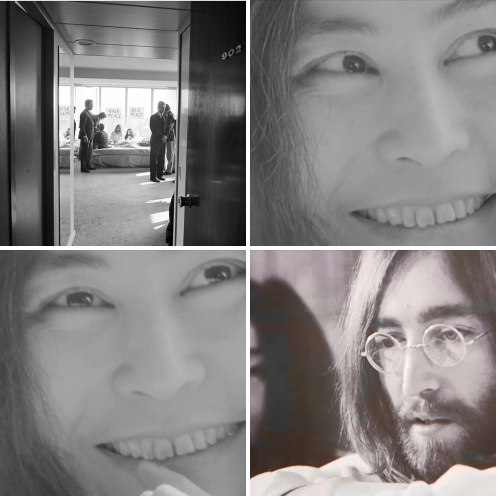 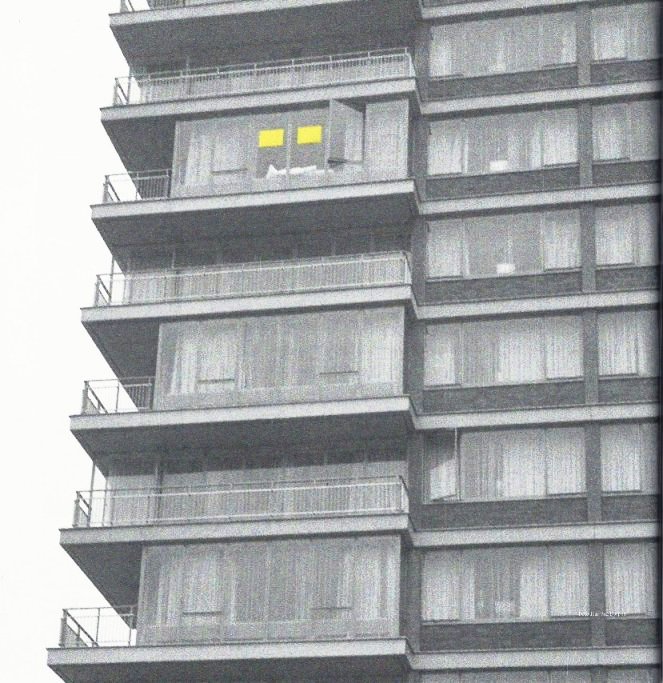 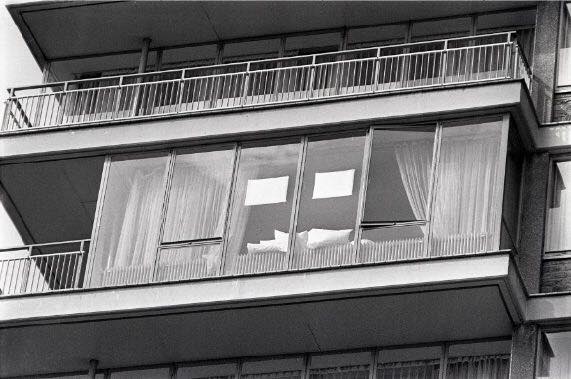 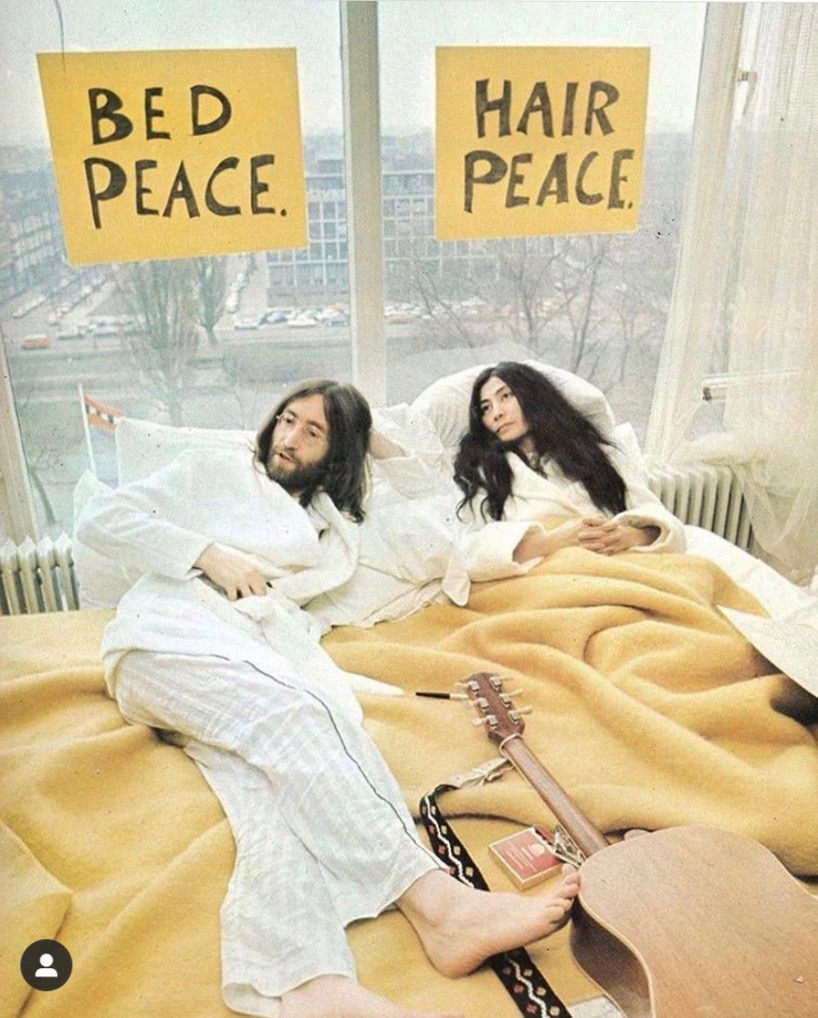 September 13, 2018: An outdoor Bed-in on Wall Street in NYC with Ringo