A DAY WITH LADY JAYNE

Celebrating Jayne’s birthday today – July 13 -here is another of my unpublished reviews (from 2010). 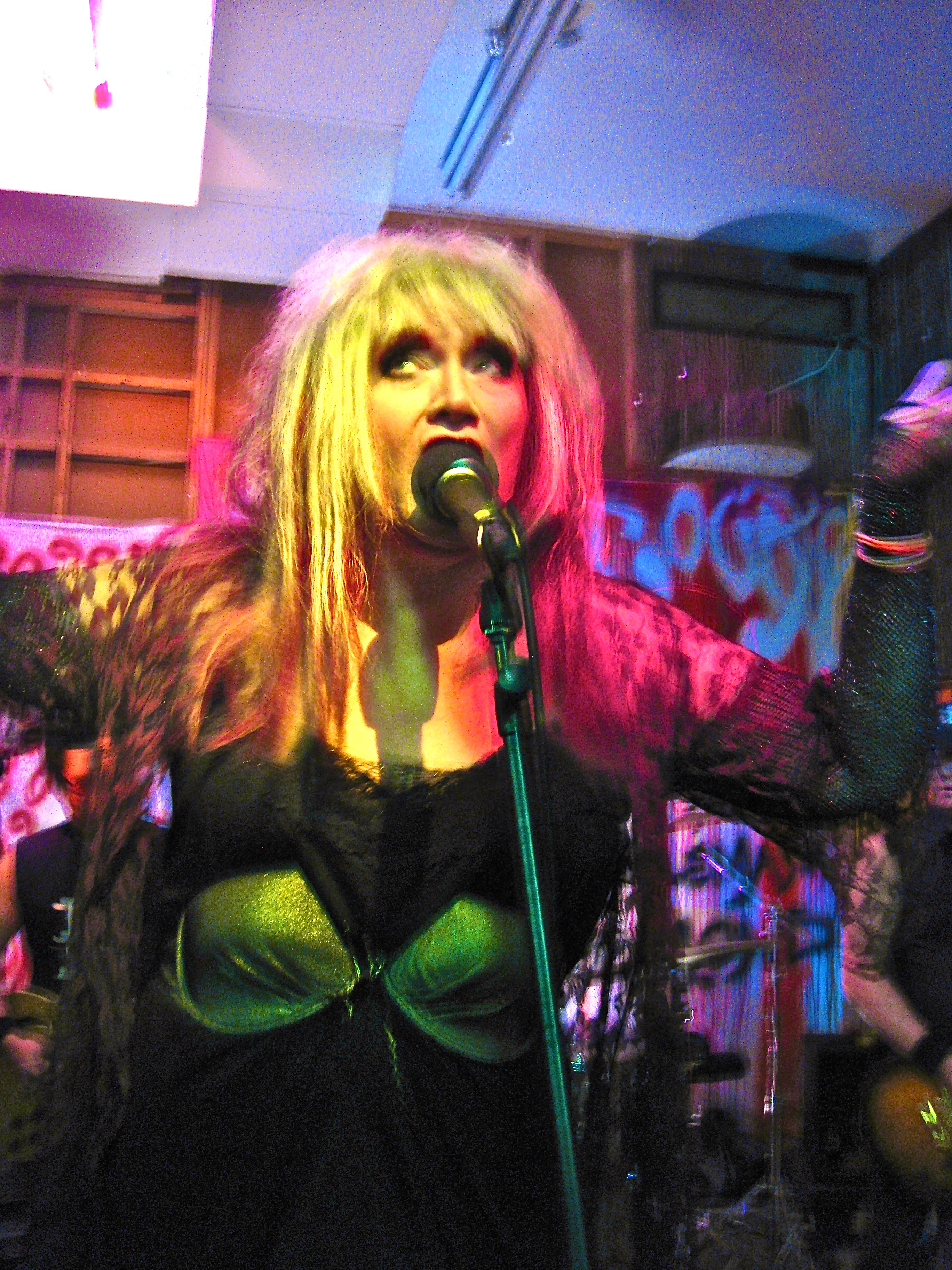 The small venue was really cool – a store-front next to the Chelsea Hotel. A really nice atmosphere – art everywhere, by at least 10 artists; Ultra Violet, Mick Rock, Billy Name, Prairie Prince, Jayne, etc… The evening was called Jayne County’s Mad Tea Party. There was a lovely Alice in Wonderland themed teapot and cookie display, which everyone was courteous enough not to devour until after the show. Colored bits of paper and glitter littered the floor, a little Silver Room was constructed in homage to the Factory. Every true freak left alive on the planet was there… all the Warholians; Billy Name, Ultra Violet, Penny Arcade, Ivy Nicholson (who was in a heap on the floor most of the night) and other cool folk like Debbie Harry – looking beautiful – came with Miss Guy, and Mick Rock.

One of the great secrets of New York City is that there are still many aging, infamous 1960s characters still out and about, who jump at the chance to share their legendary stories of superstardom with us young acolytes, who listen wide-eyed and in awe. It was an incredible treat to find so many of these living legends at one watering hole! It’s amazing how many details they recall (or embellish) since they were all so messed up on drugs back then. They say it’s because it was such an exciting time, and there has been nothing like it ever since to remember.

Walter Steding did a brief crazy violin opening, but people were so busy milling around that they didn’t seem to notice him at all. There was no stage – Jayne just sang amongst us, like the bands on Top of the Pops. The mixing desk actually was a little DESK with a mixer on it! I was up front next to Penny Arcade, closer to anyone onstage than ever. Jayne’s usual cheap trashy negligee from Woolworth’s was worn with a bra over it, below her breasts, making her appear like 4-breasted Godzilla rival. One red boot and one black…and a big white wig.

The first order of business was the unveiling of Jayne’s new ‘Candy Darling crucified on a penis-cross’ painting. This is her third Candy tribute painting, and we heard Jayne’s usual rant about how her other paintings were stolen, and she knows who has them, etc… Actually, all of Jayne’s paintings are beautiful (there are few without penises in them). They are super colorful, and full of glitter! Some are Egyptian themed, and some are just gorgeous collages of pure color.

It was a short set of about 6 songs. The first song was ‘Max’s Kansas City’, with Jayne name-dropping everyone we knew and loved who played there. She dedicated ‘Man Enough to be a Woman’ to Jobriath. Then the obligatory Rush Limbaugh hate song, and a rousing ‘Storm the Gates of Heaven’. Then she announced, “The song I’m gonna be singing until I can’t walk anymore – I’ll be in a wheelchair singing this…” If You Don’t Want to F- Me, Baby F- Off’. The last song was a rousing version of the Strangeloves’ ‘Night Time’. It was a short set, but Jayne always manages to get a cracking band together (the War Holes), and they were incredible!

She walked out into the crowd to taunt and dance with people, mostly with Tony Mansfield. When Jayne was ranting and raving and writhing on the floor (as usual), Tony climbed on top of her. For a few seconds, Jayne didn’t even know that someone was there, and when she saw him she yelled out, “Tony, you’re freakin’ me out now!”

We spent about an hour with Tony after the show and he was ultra-fabulous! You could tell that he was Candy’s friend and co-star – he was so animated, just like she was. He acted out lines from Myra Breckinridgeand Valley of the Dolls, delighting us with gory tales of Jayne Mansfield and Judy Garland. He’s our new buddy. A really sweet guy.

Jayne came out later in a strawberry blonde wig and took photos with us.  She is my hero/heroine… a legend who has certainly lived her life her own way. Jayne is a true freak, but she is also loyal and dedicated to taking care of her sick mom and stray cats. (Her next book should be called ‘Man Enough to be a Cat Lady’!) It’s incredible that she is making such wonderful art, and that she is loved and accepted by those of us with heart and with a sense of sick humor. Jayne is one of the last great ones left.

At the end of the show, I glanced over at the exit door. There, all alone on a chair was Jayne’s precious Candy Darling painting – ripe for the taking! I pulled my friends over to show them the hilarity of the situation. I told Billy Name that he’d better put the painting in a safe place. He hobbled over to it with his cane and stuck it between the wall and the front window (another place where everyone could see it from outside)! I later told Jayne’s manager to keep an eye on it. Geez – we don’t want another 100 ranting emails from Jayne about another stolen Candy Darling painting!!! 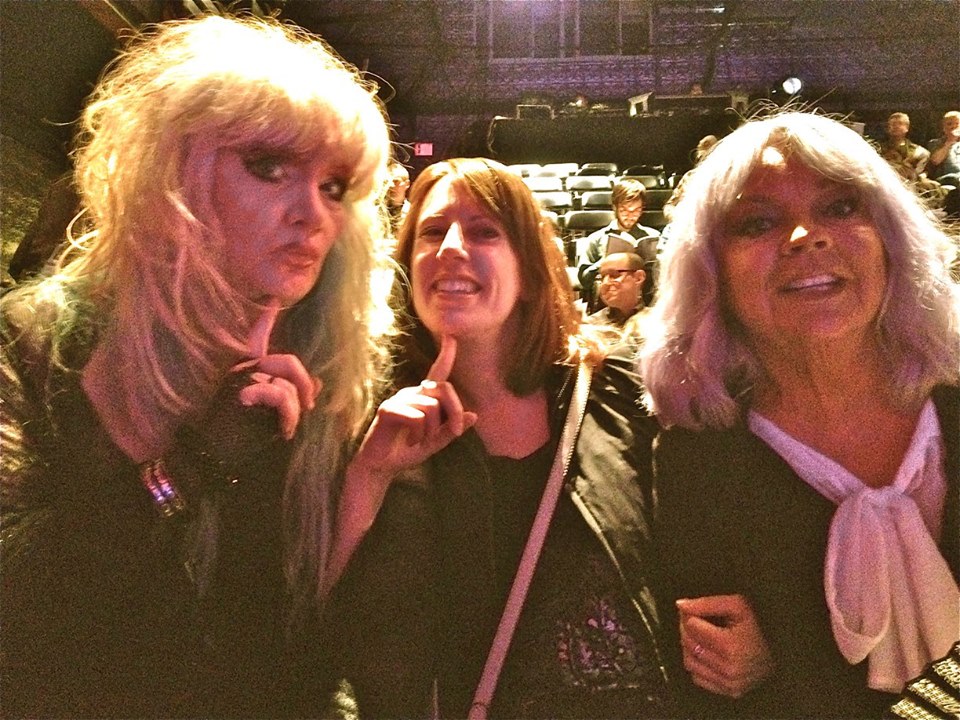 With Jayne and the fabulous Cherry Vanilla!

All my stories about Andy Warhol: