In the past, critics have used similar analogies in reference to Sparks’ body of work.

But over time, the tides have turned.

The euphoria of a morphine drip. The life sustaining trickle of intravenous fluids.

The dribbling artfulness of Jack the Dripper (Jackson Pollock).

This is the modern assessment of Sparks’ music and the elation that each new album brings for their fans. 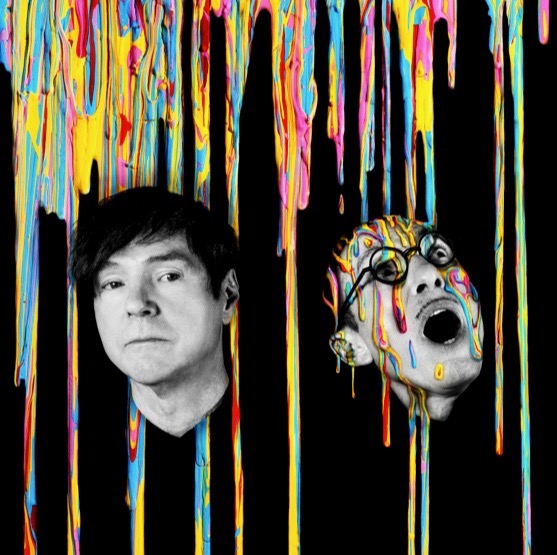 On the album cover,

Russell is immune from the drip,

but Ron gets splashed!

In all their genre defying diversity there has been a constant outpouring of genius dripping from the pen of Sparks’ maestro Ron Mael and from the golden throat of his brother Russell. In over 50 years of producing new music, every dazzling album, every song, each persistent note makes a significant ripple in the vast ocean of Sparks’ uncompromising achievements.

On the album cover, Russell is immune from the drip, but Ron gets splashed! This is a modern take on their 1983 album cover – In Outer Space, in which Ron gets a pie in the face, yet Russell remains unscathed.

Sparks’ 24th album begins with some lovely gratuitous sax introducing ‘All That’ – a grand, sweeping overview and celebration of a steadfast relationship. Russell’s glorious angelic vocal, paired with a resounding acoustic guitar celebrates “all that we’ve done/lost/won, all that we’ve seen/heard/dreamed and more”. This anthem includes Beatlesque harpsichord/string sounds and a brief guitar solo evoking George Harrison.

Watch! ‘All That’ (In isolation): https://youtu.be/PKbAErmGntU

‘I’m Toast’ is much heavier in comparison to the opener. The guitar-led rock backing is like ‘Tainted Love’ (Gloria Jones 1964/Soft Cell 1981) on steroids. Our prescient singer pleads with 9-1-1 and Alexa for an escape from this doom and gloom in which ‘nothing is the same as it was’.

Russell’s layered, pleasantly relentless ‘La la la’s’ propel the upbeat ‘Lawnmower’. Having grown up in the suburbs, I remember guys like this. Proud green thumb dads competing for the greenest lawns, yelling ‘Get off my grass!” to us pesky kids. Now, thanks to Sparks these lawn guys have their own theme song.

More acoustic strumming, synths and ‘La la la’s drive ‘Sainthood Is Not In Your Future’. Of all the relationships ever visited in Sparks songs, this one is the nastiest! This poor guy is dodging left hooks and bullets! The cleverest lines rhyme laughter with BAFTA! My favorites:

The Pope is on the floor laughing
The Cardinals roar, they’re backslapping

Russell shines, and a grand piano accompanies layers of synth strings on this ode to the West Coast, ‘Pacific Standard Time’. A California native laments the infiltration of his irresistibly divine home paradise by encroaching tourists lingering or becoming permanent residents.

In many ways, Ron Mael as a composer must empathize with Igor Stravinsky. If only these two unique geniuses could have met in this lifetime to commiserate. The premise of ‘Stravinsky’s Only Hit’ (an operetta in itself) is that Igor is upset that a popular lyricist has enhanced one of his masterpieces, adding choruses and verses. After Igor wins a Grammy for his hit song, he resentfully celebrates in an erratic drunken dance (which is impossible to dance to). There are “La ha ha’s” which Ron has borrowed from Alban Berg. Stravinsky is not fond of his muzak sell-out which plays at the mall. The maestro remains bitter. It’s art imitating life, as the composer’s  ‘Infernal Dance’ from his ballet, ‘The Firebird‘ has since been widely sampled in pop music.

In actuality, Stravinsky’s response to the wild success of his 1910 masterpiece, The Firebird was to blow everyone’s minds with The Rite of Spring, which Leonard Bernstein described as “The best dissonances anyone ever thought up, and the best asymmetries and polytonalities and polyrhythms and whatever else you care to name.” 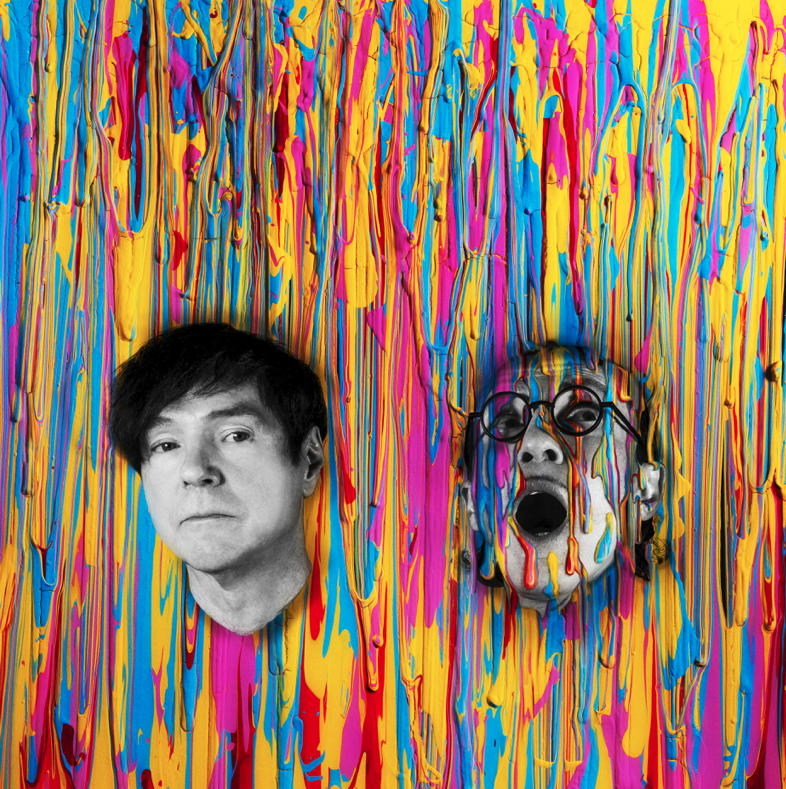 The irony of ‘Left Out In The Cold’ (about a guy who researches winter-wear in northern Canada) is the Samba beat, evocative of a dance in the tropics.

‘Self-Effacing’ begins like a sacred psalm – with Russell’s gorgeous layered vocals in an uplifting chorale of exquisite melody – which suddenly bursts into a pure pop song about an extremely humble guy. Ron always asserts that most of his songs are not autobiographical, but in this case the lyrics somewhat apply to his character. Although I keep urging him to donate his brain to science, Ron remains extremely modest and humble. The line about not wearing flashier clothes certainly rings true! This has all the hallmarks of a Sparks song – joyful pop with utterly beautiful countermelodies – and the underlying theme of the underdog who seems comfortable yet slightly resentful in his self-imposed obscurity.

An accountant is scribbling out his soon-to-be classic novel in ‘One For The Ages’. He speaks of its greatness without revealing the plot, amidst a dark synth-pop backing.

‘Onomata Pia’ is another pop operetta. The title is a rhetorical play on words – a bubbly song about a speechless Roman diva named after a figure of speech, who has no trouble communicating. The staccato syllables and oom-pah beat are perfected by the use of countermelody and uneven phrasing. This is the best word-play song since Ron came up with various metaphors for ‘Metaphor’ on Hello Young Lovers in 2006. This would blend in well with the tunes of Indiscreet.

With a militaristic drum beat and driving synths, ‘iPhone’ takes us back in time where biblical and historical figures have the same problems and interruptions as we do, when iPhones become a distraction. These famous folks range from Adam and Eve to Abe Lincoln, who pauses his Gettysburg Address to call out someone rudely using their phone during his important speech. But nobody has a worse problem than sobbing Mrs. Steve Jobs, especially since her husband who created the device is no longer with us! And of course, there is the F-word!

The chorus:  Put your fucking iPhone down and listen to me…

‘The Existential Threat’ evokes Brecht/Weil’s ‘Alabama Song’ on speed – with jazz breaks! The excessive lyrics and rapid vocal patterns are reminiscent of Sparks’ own ‘Upstairs’ (Whomp That Sucker).

‘Nothing Travels Faster Than The Speed Of Light’ is a pop melody calling out fake news. There’s a beeping news bulletin and odd tempo changes. The vocal melody reminds me of ‘Miss the Start, Miss the End’ (Indiscreet 1975).

On ‘Please Don’t Fuck Up My World’ Sparks have created a gorgeous lush ballad about our planet. They must be really serious in their message, since they have employed a chorus of children to appeal to our senses. In Sparks’ usual twisted way, they have ensured that their song will never get played on the radio by inserting the F-word in its title and lyrics. Ron has successfully used this tactic before on ‘The Angels’ (Balls 2000). The theme of respecting nature is a continuation of ‘Never Turn Your Back on Mother Earth’ (Propaganda 1974). Another classic and ironic Sparks device is to waste an entire pad of paper by writing one line of the lyric on each page in the song’s video!  Once again, we are able to listen to something very beautiful and seriously important (with an orchestral interlude) while laughing hysterically at Sparks’ trademark irony.

Sparks have certainly made a splash with this new album – drip by drip.

Watch all of Ron’s lyric readings here.
He is doing them every Sunday at noon.