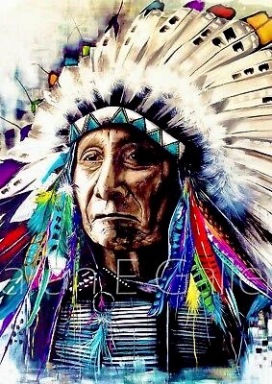 Please join me and enjoy these songs

in celebration of our Native Americans and their inspiration…

I first became aware of the plight of American Indians as a kid during family drives to New York City. While waiting in traffic to pass through the Queens Midtown Tunnel into the City I wondered about the writing on the wall at the tunnel entrance. The bold graphic read, “WHEELS OVER INDIAN TRAILS”. I later found out that it was an artwork by conceptual artist John Feckner who stencils and paints captions on buildings in the boroughs of New York. He is a forerunner of contemporary graffiti artist Banksy.

“Fekner’s stencil Wheels Over Indian Trails greeted motorists and international travelers arriving in New York City at the Pulaski Bridge Queens Midtown Tunnel from 1979-1990. The message remained untouched for eleven years, until Earth Day 1990, when Mr. Fekner, feeling the piece had run its course, painted over it.”

Let’s start our playlist with ‘Ten Little Indians’ – a Folk Song written in the 1800s to teach children how to count. I’m trying to decide if this is more or less annoying than ‘99 Bottles of Beer on the Wall’.

The Beach Boys released a song with the same title based on this old tune in 1962.

We all know this song – however, we are probably unfamiliar with its title. ‘Across the Alley From the Alamo’ is a jazz standard from 1946 with lyrics about an ill-fated Navajo Indian and his pony. It was first a hit by The Mills Brothers and then by Woody Herman, Stan Kenton and others.

‘By the Waters of the Minnetonka’ was recorded by Desi Arnaz in a duet with Carol Richards. The song was also featured in a 1952 episode of I Love Lucy in a duet between Ricky and Lucy. Carol’s vocal was replaced by Lucy’s.

‘Apache’ by The Shadows is a super cool country/western instrumental featuring ominously twangy guitar reverberating in echo, and galloping military-style drumming. It was inspired by the American western film titled Apache (1954). Although this was not the original recording of the song, it greatly inspired the Beatles when they heard the record in Liverpool. The Shadows version was recorded at EMI Studios in London (later know as Abbey Road Studios of Beatles fame).

‘Rumble’ is a classic instrumental by native American Indian guitarist Link Wray. The track released in 1958 was highly influential on many now legendary artists, especially Bob Dylan and Iggy Pop. The song was banned because of its sinister sounding intro  title which suggested a gang fight. A 2017 documentary film about rock n’ roll’s reflection of American Indian culture is titled after Wray’s iconic song.

‘Running Bear was written by The Big Bopper (real name Jiles Perry Richardson). It was released as a single by Johnny Preston – becoming a No. 1 hit in 1959, seven months after ‘the day the music died’ (when The Big Bopper perished in that infamous  plane crash with Richie Valens and Buddy Holly. The song opens with war cries, and there is Indian style chanting in the choruses sung by the Bopper.

Elvis Presley played a half-breed American Indian in the 1960 film Flaming Star. His character’s mother is American Indian and his father is white. A now famous image from this film (of Elvis wielding a gun) was used by Andy Warhol in the making of his silkscreen portraits; Single, Double and Triple Elvis.

The interesting thing is that the film was originally meant to be titled Black Star – therefore, the theme song originally had that title. The lyrics about death – and the fact that a cancerous lesion is called a black star –  are thought to have influenced the naming of David Bowie’s final album Blackstar released only days before his passing from cancer in 2016.

And when a man sees his black star  / He knows his time, his time has come

There’s a lot of livin’ I gotta do…

Here is the title soundtrack song from the EP Elvis by Request: Flaming Star and 3 Other Great Songs… 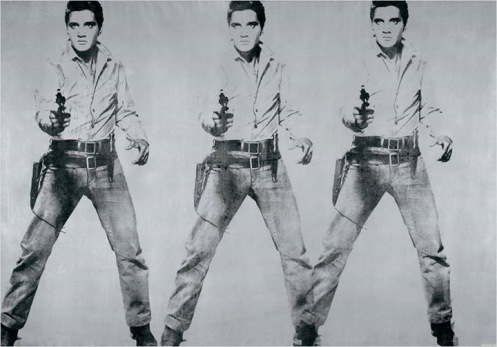 ‘Bang Bang (My Baby Shot Me Down)’ is a song about a couple of kids playing the game Cowboys & Indians. They grow up to become lovers. Not much changes in their relationship. It was written by Sonny Bono and sung by Cher in 1966 on her solo album The Sonny Side of Cher. This was her first million-selling single as a solo artist. The song was on the soundtrack to their failed film, Chastity. Cher did a rock re-make of this song for her Cher album (1987) featuring backing vocals by Jon Bon Jovi.

Nancy Sinatra does a gorgeous moody, twangy cover version of this.

The Yardbirds released a cover version in 1967. Like the children’s folk song of the same name, this is another countdown of Indians, but it is about their downfall due to disobeying The Ten Commandments.

‘Indian Giver’ is a song based on the phrase describing a person who gives a gift and later takes it back. The song was first a hit in 1969 by The 1910 Fruitgum Company on Buddah Records. The B-side was a backwards song called ‘Pow Wow’. The Ramones and Joan Jett have covered the song.

Paul Revere and the Raiders’ song ‘Indian Reservation (The Lament of the Cherokee Reservation Indian)’ from 1971 is an ode to the Cherokee nation. This recording features the vocals of Mark Lindsay and members of The Wrecking Crew who played on hundreds of classic hit songs; the great Carol Kaye on bass and legendary Hal Blaine on drums.

‘Wig Wam Bam’ by The Sweet (1972) kicks off the Glam band’s trademark heavy tribal drumbeat. This another Chinn / Chapman work of art. The lyrics are based on the poem Haiwatha but with a twist. An Indian girl takes Hiawatha and Running Bear to the silver stream, whispers words that they’ve never heard – then it’s ‘Wam bam, bam shamalam!

Watch – The Sweet (Top of the Pops): https://www.youtube.com/watch?v=ZyBFxjmJPqk

The Osmonds sang ‘Crazy Horses’ in 1972. CRAZY IS RIGHT!!!  This is a heavy rock song with wild, whinnying keyboards and a Native American Indian beat – possibly in reverence to the Lakota Indian warrior Crazy Horse. One comment on this said that this should have been called ‘Dark Side of the Mormon’! Jay Osmond sings lead as Donny was then going through puberty and his voice was changing. The song was one of the first about ecology and pollution. The picture sleeve depicts the band in a junkyard.

‘Half-breed’ was a No. 1 hit for Cher in 1973, featuring the great Hal Blaine, drummer of The Wrecking Crew who performed on hundreds of hit records in the 1960s & 70s. Cher is Armenian (her mother claims to be of partly Cherokee ancestry, but Cher probably did not have such problems growing up as the lyrics suggest.

In 1973, the Swedish band Blue Swede recorded a chart-topping cover version of ‘Hooked on a Feeling’ which had been a million seller in 1968 by singer B.J. Thomas. However, Blue Swede began the song with an Indian chant, “Ooooga chaka ooga chaka…” (similar to those sung by The Big Bopper on Johnny Preston’s ‘Running Bear’ in 1959, mentioned above) which was also featured on an earlier version of ‘Hooked on a Feeling by Jonathan King in 1971.

The Native American Indian band Redbone had a No.1 hit with ‘Come and Get Your Love’ in 1974 from their album Wovoka. ‘Redbone’ is a Cajun term meaning ‘person of mixed race’.  I always loved the special effects of the guitar sound on this song.

The band previously released ‘The Witch Queen of New Orleans’ in 1971 from their album Message from a Drum. It’s about a real person – a female voodoo practitioner and healer who was also part American Indian. The cool haunting guitar effect on this one was played using a drumstick.

Watch – ‘Come and Get Your Love’: https://www.youtube.com/watch?v=jRaofUdZiGs 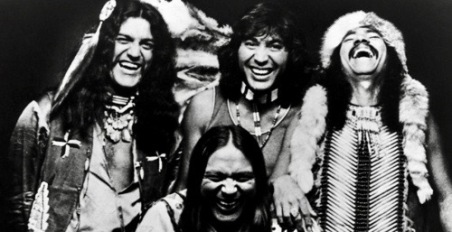 Ian Hunter, (of Mott The Hoople) named his 1976 solo album and title track ‘All American Alien Boy’. The British Hunter moved permanently to America in the 70s. He always loved the sound of the names of American cities, especially those with American Indian names, such as Chicopee, Chatanika, Chaska, Opelika, etc…  (all of which are named in the Johnny Cash version of ‘I’ve Been Everywhere’). The genius jazz bassist Jaco Pastorius drives Hunter’s song, along with David Sanborn’s alto sax. In the last verse, Hunter iterates the poetic names of American Indian tribes.

Ian Hunter’s ‘The Ballad of Little Star’ is on his 3rd solo album Overnight Angels released in 1977.  The album features the song ‘England Rocks’, the song (from which Ian simply changed the lyrics to ‘Cleveland Rocks) was a hit in 1979. Despite Ian’s disdain for his own album, O.A. features some amazing ballads and rockers. Hunter’s sad poetic lyrics on this gorgeous ballad tell of an Indian child named Little Star who is forced to sell her body.

Lost on a merry go round, on the game
You can never be found cause you don’t know who you are
The reservation killed your nation
And in some tourists car you feel the pain
Little star…

Bowed those fine heads that, once proud, roamed the plains
They sought nothing to gain ’til our fathers civilised
And broken-hearted arrows roamed the skies
Then you were born to feel the pain
Little star

‘The Human Beings’ by Adam and The Ants is a recitation of the names of American Indian tribes; Blackfoot, Pawnee, Cheyenne, Crow, Apache, Arapaho…and the chant, “Goklayeh-ho”  – a shout-out to Goklayeh (One Who Yawns) –  a Bedonkohe Apache leader. This is appropriately backed by a Burundi beat of two drummers which was The Ants’ distinctive tribal sound. This was on their sensational breakthrough 1980 album Kings of the Wild Frontier. 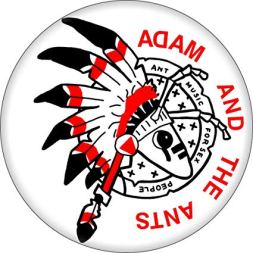 Mia has Retired! I’m going to miss her. I hope she can collect Social Security!

After nearly a century, dairy company Land O’Lakes will be removing the image of a Native American woman from their packaging. The logo has since been changed to feature a blue lake lined with green trees. The character, known as Mia, was designed by illustrator Arthur C. Hanson in the late 1920s. She was revamped in the 1950s by Patrick DesJarlait, a member of the Ojibwe tribe. 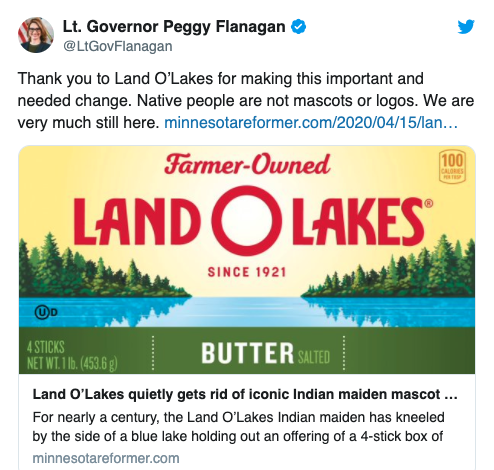 Land O’Lakes’ CEO released a statement in February saying, “As Land O’Lakes looks toward our 100th anniversary, we’ve recognized we need packaging that reflects the foundation and heart of our company culture — and nothing does that better than our farmer-owners whose milk is used to produce Land O’Lakes’ dairy products.” In addition to the new artwork, real-life farmers will also be featured on the Minnesota-based company’s products.

The retirement of Mia has been met with a wide swath of responses. Minnesota Lt. Gov. Peggy Flanagan, a member of the White Earth Band of Ojibwe, praised the change.

But while the move earned praise, it also raised some questions. Many considered the company’s refusal to address the controversy as a sort of cop out, quietly burying the offensive mascot instead of using it as a teachable moment. Adrienne Keene, a professor at Brown University and citizen of the Cherokee Nation, told the Minnesota Reformer, “It could have been a very strong and positive message to have publicly said, ‘We realized after a hundred years that our image was harmful and so we decided to remove it’ … In our current cultural moment, that’s something people would really respond to.”

Some folks are calling for a boycott of the Land O’Lakes brand, which is ridiculous and will go nowhere. Imagine getting that worked up about a butter logo?! But I guess it’s something to complain about after a long day of protesting healthcare workers and demanding the right to get your nails done… 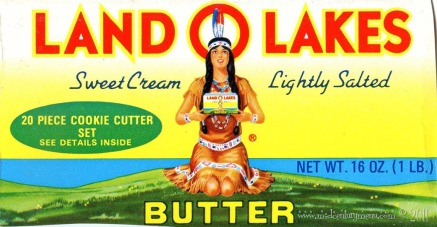 2 thoughts on “HAIL TO THE CHIEF!”