The Ridiculous Trio Plays The Stooges

As if there is not enough Stooges material to listen to on the 50th anniversary this year of Fun House (with a 16-album box set of outtakes) and the newly unearthed Goose Lake 1970 concert, here is something else that is really fun. The Ridiculous Trio (trombone, tuba and drums) play The Stooges! 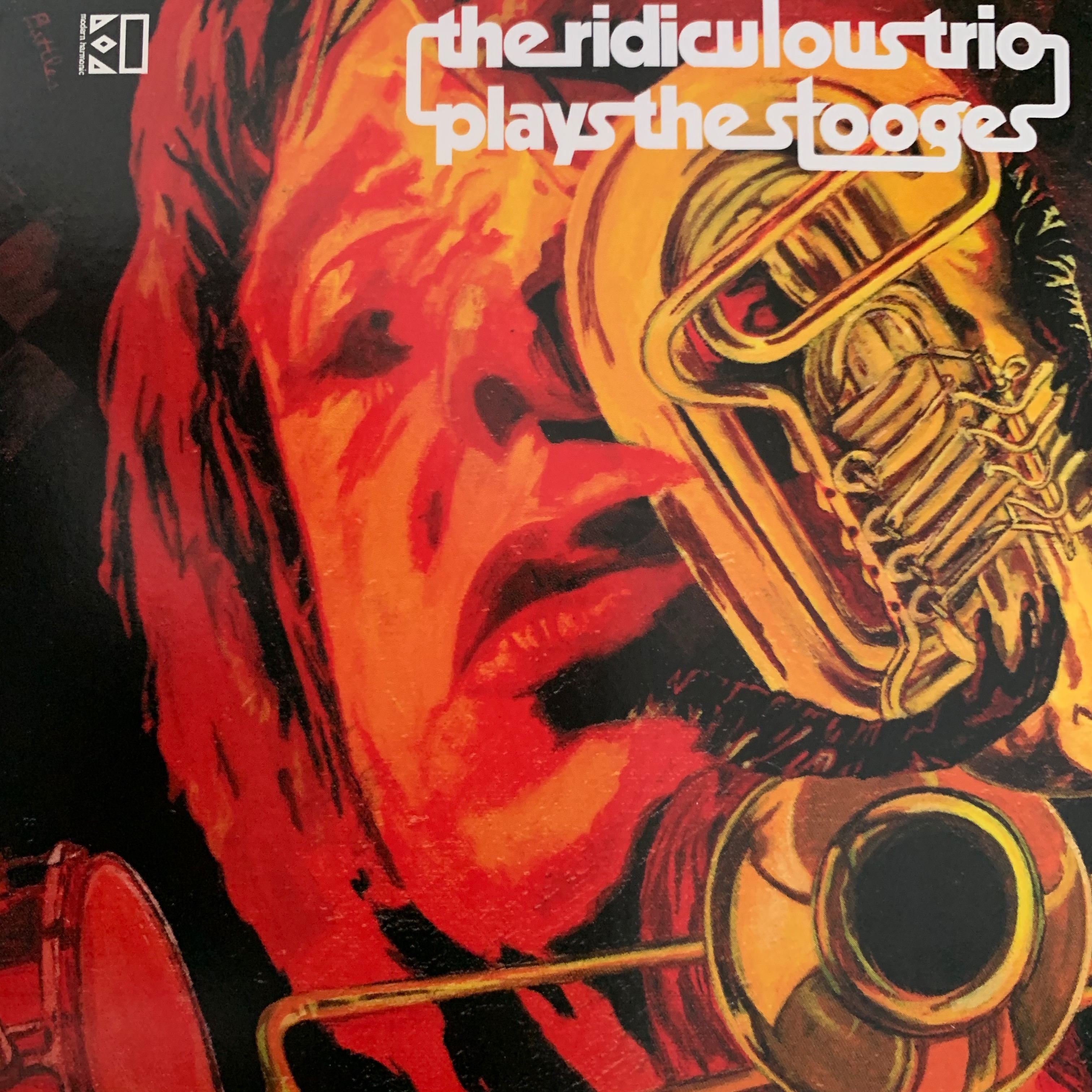 I usually can’t stand cover songs, but I just had to buy this because I was so impressed with the painted CD cover replicating the fiery red and yellow swirl of the Fun House album art, with images of a trombone and tuba in the mix.

If I was the director of my high school marching band, this is what we would sound like. The tuba takes the bass parts, and the trombone plays the melody and leads, mimicking Iggy’s yelps and yowls with screechy high notes. The horns, along with thrashing, bashing drums, maintain the fluidity and hypnotic swagger of the Stooge groove. It might be ridiculous, but it’s brilliant!

Usually, instrumental covers of classic songs are known as ‘muzak’ – but you can’t make muzak out of The Stooges!  Even if these songs were played on flutes and piccolos, you could not tame them. The big bold brass and crashing drums are more appropriate.

From the opening hand-claps of ‘No Fun’ I could tell this was going to be another great Saturday night alone for this Stooges fanatic! ‘Down on the Street’ is aggressive with a nice break of pure chaos. The ‘scream’ at the start of ‘T.V. Eye’ is a honking horn blow. This might be my favorite track. I love when the trombone sometimes sounds like a kazoo!

The first three songs pack a punch, but some songs work better than others. ‘Scene of the Crime’ starts off powerfully, but only repeats the riff and breaks apart, until it bursts into ‘Death Trip’, which also shoots out of the gate but does not amount to much. It’s hard for brass to replicate the sound of razor blades against guitar strings that James Williamson gloriously achieves.

And now, we’re back in action! The sucking Stooges vortex that draws us in to the beautiful ‘Dirt’ is achieved wonderfully by the horn, which also manages to replicate the sound of a guitar really well. Not exactly the fuzzy tone of Ron Asheton, but an impressive sound nonetheless. The tuba pays a fine tribute to Dave Alexander’s lovely bass line. I really like this one!

45 seconds of ‘She Creatures of the Hollywood Hills’ acknowledges that they know their Stooges catalogue… ‘I Wanna Be Your Dog’ is the least successful, with some odd stops and starts. It sounds the most like a marching band. And I really miss the sleigh bells!

The songs are all shorter versions but I would prefer to hear them go on longer. ‘Not Right’ is next, and it’s so right, and a bit jazzy!

Over 15-minutes of ‘We Will Fall’ is a waste of precious time, (although John Cale must be gloating). At least three more Stooges covers could have been interpreted Instead. ‘Loose’ would have been nice, or even ‘L.A. Blues’! But overall, this is the most amazing thing I have heard in a while!

The amusing liner notes state that the band themselves were surprised by the release of this CD, as this project reaches back to some vinyl single releases in 2004.

The Ridiculous Trio are:

The label, Modern Harmonics (whose logo looks like the Elektra logo sideways) has also released a Prime Movers disc – The Prime Movers Blues Band (with Iggy Pop) MHCD-098 which I am also going to check out! 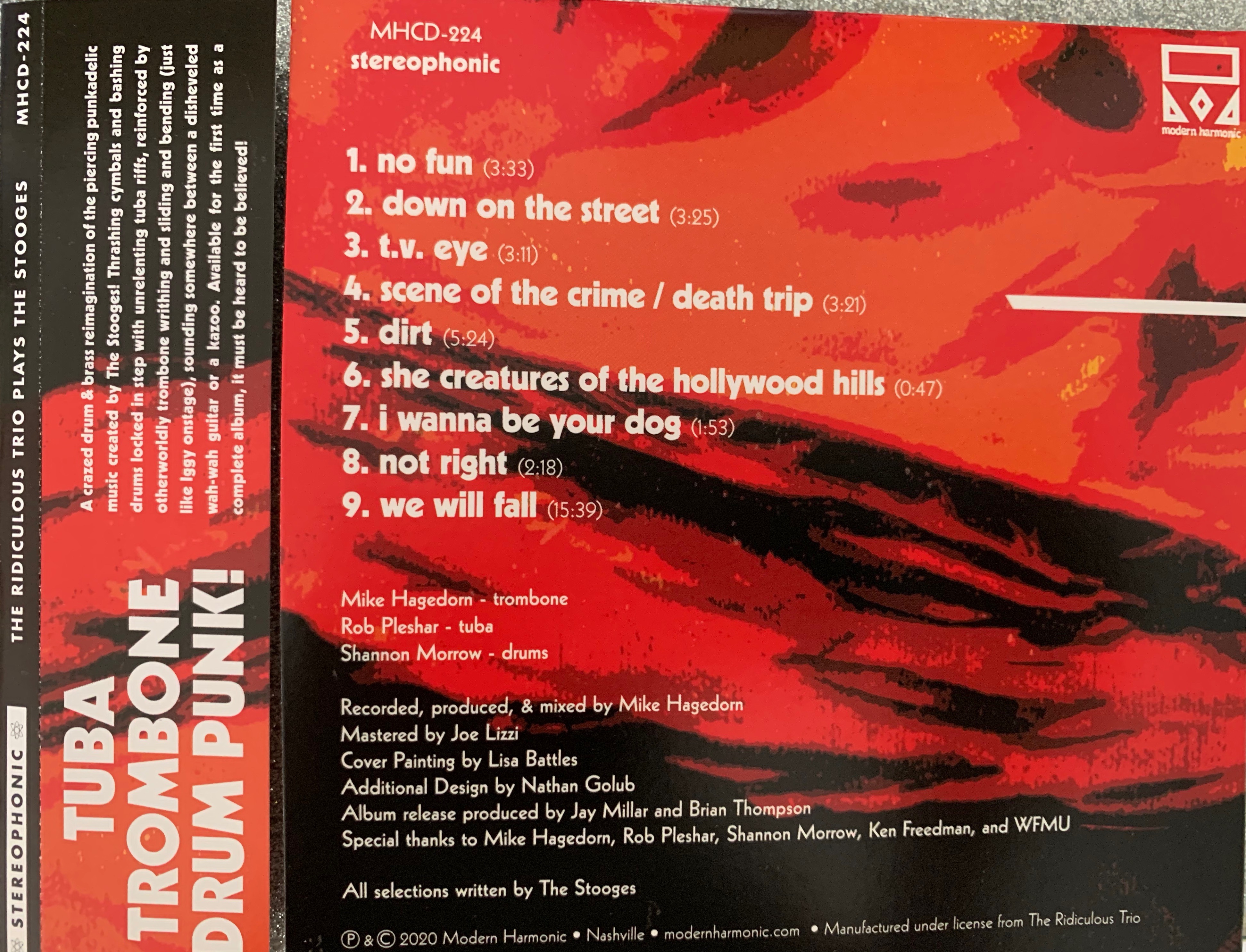 One thought on “Ridiculously Brilliant”