In 1970 (my first teenage year)  I saw a photo of a ravaged creature called Iggy in the pages of a music magazine. He was the most beautiful and obnoxious creature I’d ever seen; long messy hair, eyeliner, ripped jeans, waving a cigarette. I thought he was super cool.

I had heard about Iggy’s widely despised band with a wonderful name. I asked the record store clerk for the album Fun House by The Stooges. He dismissively told me to look in the children’s section. I was highly insulted. There I was, a young kid with elitist taste in music being treated like a mere child!

It took months to locate The Stooges’ second album and it was sheer perfection. Side One: “Down on the Street”, “Loose”, “TV Eye” and “Dirt” – the perfect album side! (This was the exact order of the Stooges’ live set). I played it to death. My friends all hated it, so I further realized its’ greatness, playing it whenever I wanted to clear out the room. It never failed. This album stomped on what we knew as music at the time and brought it back down into the street where it belongs. The Stooges’ sound screamed of frustration, boredom and intolerance. It also put me in a groovy liquid trance.

The fold-out album cover montage resembles a flaming cyclone reflected in a distorted funhouse mirror – the essence of the band’s live shows and the usual wreckage in the aftermath.

Audience participation was NOT optional. Iggy would assault and drag indifferent punters onstage by their feet, amidst flying missiles – usually edible ones – aimed at him and the band).

The album cover is a live shot by Ed Caraeff documenting the Stooges’ opening show of their residency  at L.A.’s Whisky A Go Go while they were rehearsing prior to recording the album. Caraeff also shot that famous fiery photo of Hendrix burning his guitar. (The photographs are featured in his book, One Night at The Whisky – see my review linked below).

The Stooges are on fire – their faces glowing. They are engulfed in a blaze of red, orange and yellow flames, generating a blazing heat. The lyrics include, ‘I’m burning inside / and I’m the fire of life’. Iggy in flames accurately depicts the human inferno who taunted his cowering audiences to such an extreme that they were paralyzed in awe.

While other kids were swooning over David Cassidy and the Monkees, I wanted more. While they skimmed the pages of 16 magazine looking at cutesy pin-up pictures, I devoured the articles in Circus and Creem and found Iggy – the guy who would literally open up and bleed for his intense need of self-expression and his disdain of all that was happening around him in 1970. It said a lot about what was real and what wasn’t. The sounds of opera and The Carpenters were an assault on my ears, but the Stooges’ music was a true groove! I felt like we had a mutual understanding. This was confirmed when I heard the lyrics from ‘Loose’, “I took a ride with the pretty music / now I’m burnin’ to you straight from hell”

Fun House was recorded over two weeks at Elektra Sound in Los Angeles (not at the actual Funhouse in which the Stooges resided in Ann Arbor, Michigan).

“Elektra Studios was a lovely little Spanish Colonial Adobe style structure with a nice little garden area under the California sun… A far cry from the dump over a Times Square peep show where we recorded our first record. There was a modern, mid-sized, tastefully appointed single studio inside, where we could fill the room with our intense vibes.

This felt like a place where we could make some fucking art. So, we did…

The set up was prone to leakage, but Stooges leakage was not like other people’s leakage. The Stooges leaked pearls…

There was no doubling of parts or what they call double tracking.

No wall of sound, but instead, a snaking witchery of sound. “

The band replicated their live performance in the studio as closely as possible. Along with the first album’s lineup; the Asheton brothers – Ron on guitar, Scott on drums and Dave Alexander on bass, Andy Mackay skronked away beautifully on psychedelic free-form sax emulating Coltrane. Don Gallucci who played keyboards at age fifteen on the Kingsmen classic ‘Louie Louie’ was Elektra’s staff producer.

(Gallucci) heard the integrity in their sound and felt that he “got it.” They had their “genre down.” What genre, I ask? “I don’t know. I’m not sure they knew. But they knew when it felt right, when the sound in the room felt right.” To him, their music was “minimalist, yet seamless, with every piece fitting into place, creating a trance-like state. They knew adding too many chords or other stuff would break the trance”.

Gallucci dismantled the typical studio setup so that The Stooges could stand together in their live on-stage positions, with Iggy using a hand-held microphone.

“…They were totally into simplicity and interaction, because with those few parts, everything had to work together. It was like a Swiss watch. You might not think about that with The Stooges, but if you twisted it that much, the whole thing wouldn’t work… they were actually really good musicians doing what was their dream, or their goal of what music should sound like. That kind of a float, that hypnotic feeling, there was no precedent for that. When I heard it, I thought, I can’t screw this up. I’m not going to insert myself more than getting it to sound like what makes it sound like music…”

“Howlin’ Wolf was really pertinent for me on Fun House.

That stuff is Wolfy, at least as I could do it.”

Iggy spoke about the attitude of The Stooges’ music and lyrics during a Times Talks interview on October 27, 2016 in New York City:

“We never liked the sensible music pushed at us. It lacked childhood.

Childhood is difficult to maintain.”

Fun House was released on August  18, 1970 – ten days after the Stooges’ performance at the Goose Lake festival at which Dave Alexander was sacked by Iggy for being too stoned to play –  cementing the band’s demise.  (This recording has miraculously been found. It was just released on August 8, 2020 – the 50th anniversary of the festival!)

The Stooges Live at GOOSE LAKE!!

Each player was crucial to the stunning outcome of Fun House. Iggy described the key to Ron Asheton’s powerful guitar sound.

“He had a beautiful set of fingers and a wonderful touch on his instrument. So many hard rockers are ham handed. Not Ron. Yet he managed to be very, very heavy. One key to this, and in a way the key to the whole sonic beauty of the album, was the fact that Ron played with a heavy gauge set of guitar strings. He did this, he told me, because he was originally a bassist and the heavier string was just more comfortable, but it also gave his style a kind of massive ambience.”

“About 40 minutes before we were due to start the days takes, I would drop a tab of acid. I never mentioned this to the fellas. But it was my job in the group to radiate vibes and belief, and that’s the way I did it at the time.”

The album’s opening track ‘Down on the Street’ was released as a single. The song with its sexy driving groove echoes the imagery of the ‘city of lights’ of The Doors’ “LA Woman” – the ultimate driving song – through suburbs and on freeways. But in The Stooges’ lyrics, Iggy prowls the streets on foot – where the faces shine – out of his mind.  The single version with added keyboards (played by producer Don Gallucci) is even more in line with The Doors’ sound. 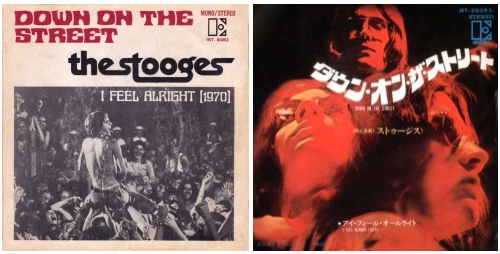 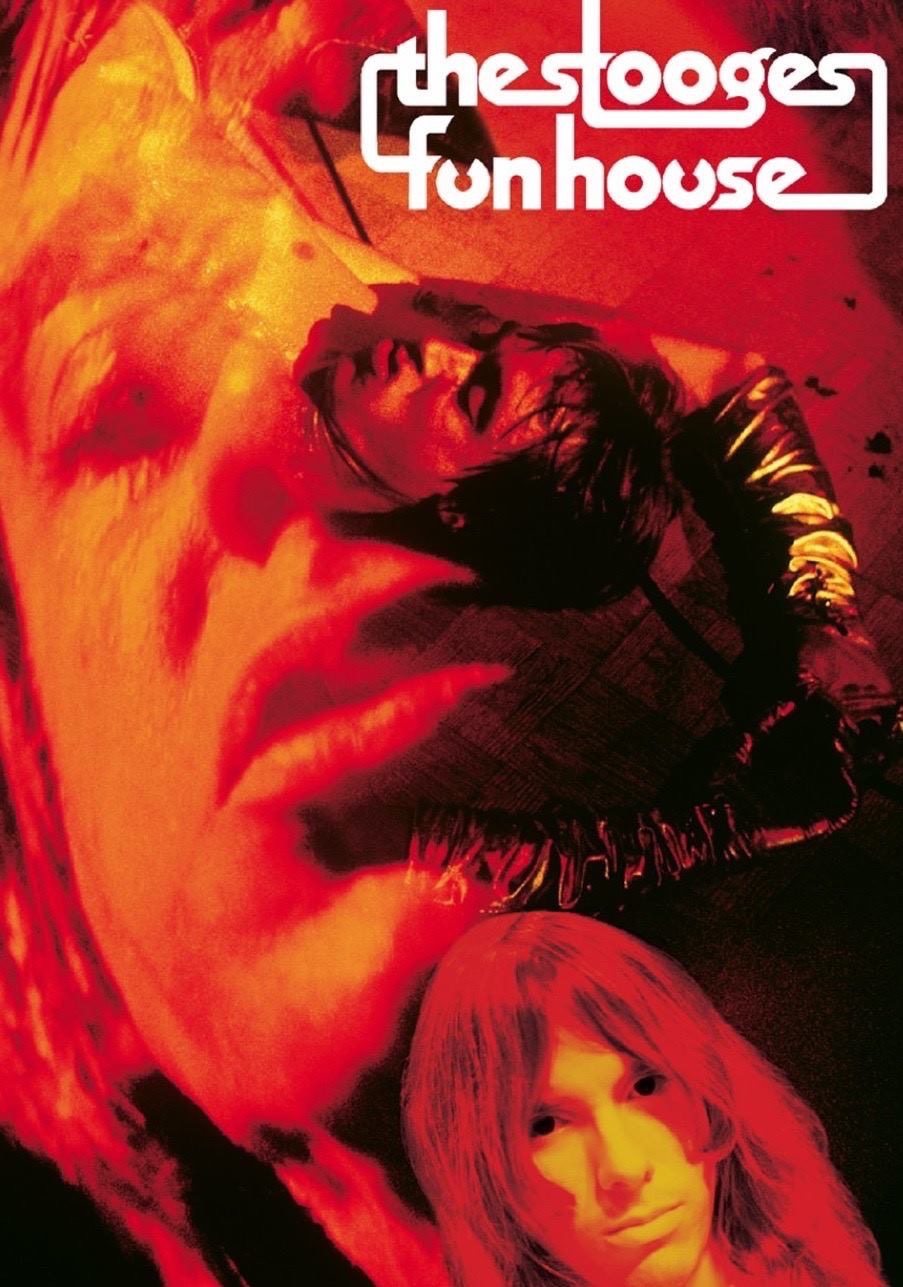 ‘Loose’ had been the band’s choice for the opening track, but the label won that battle. In the Stooges’ world, this killer track with its raucous riff is a love song. Iggy’s opening scream is sincere and highly impactful!

The song title ‘TV Eye’ is rooted in something that the girlfriends of the band would say – ‘He’s got a twat vibe eye on me’. It begins with Iggy’s feral roar. During the break in this song, we are sucked into a vortex of sound from which we cannot (and do not want to) return.

‘Dirt’ is a slow blues which Iggy deeply croons with conviction. Ron’s guitar erupts in beautifully chaotic outbursts illustrating the depths of the singer’s despair – yearning, dreaming and burning inside.

“I couldn’t believe what I was hearing! The strange thing was that we had already finished writing Fun House, and many of the things that we tried to do on it, Miles (Davis) was doing in Bitches Brew – the same boundary crossing non-chalance, the somewhat raunchy and more modern funk-vibe. From that point on I truly immersed in his music.”

‘1970’ is the Stooges’ annual update. While ‘1969’ was rife with boredom, in this year’s stomper Iggy feels alright. Scott’s primal drumbeats really shine on this one.

The title track is a wild jam with Iggy yelping and yelling, “Lemme in / I came to play.” More telling lyrics are reflective of the cultural climate, “Livin’ in division in a shifting scene.” The instrumental ‘LA Blues’ sounds like an actual riot.

Just ten days prior to the release of Fun House, the original band met its demise at the Goose Lake festival on August 8, 1970. There would not be another Stooges album until Raw Power in 1972, another raging blast of magnificence, however, an entirely different beast.

Fun House is one of the greatest albums ever made. Of course, as is true with anything of greatness, it took decades for the album to receive accolades, but thankfully it has found its place – and so have The Stooges – in the Rock N’ Roll Hall of Fame.

“Something about this record that I like is the way it begins with a couple of very short, fully structured numbers, and then slips farther and farther out of control, and away from song structure and sing along shit as it progresses. Yet it never loses a structure of its own, and each number has a dignified ending.

Peaceful in a way.

In 1999, a glorious limited edition (3,000 copies) 7-CD Fun House box set with all the outtakes and studio dialogue was released by Rhino Handmade. I was amongst the first to grab one before it sold out within a year!!! The box set was re-released in 2010 due to popular demand.

Celebrating the album’s 50th anniversary,  rhino.com released a limited edition vinyl box set – of 15 LPS with 2  repro 7-inch singles, 2 posters a 24-page book and other goodies. Only 1,970 copies were made.

Most of the musical content was originally released by Rhino Handmade in 1999 as a seven CD box mentioned above.

See my review of an insane album:

The Ricidulous Trio Plays The Stooges!

One Night at the Whisky – Stooges photos by Ed Caraeff – my book Review: 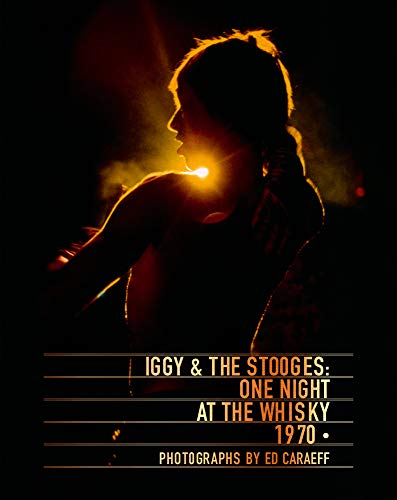