Steering clear of biopics keeps my memories pristine, as I have experienced the  reality – absorbing every accurate historic detail about my heroes – especially of Bowie. I had not planned on seeing this film, but a link to watch for free appeared on my phone during a sleepless night.

Stardust has been denied the rights to David’s music (but luckily not Jacques Brel’s) and has gotten reviews with the headlines, Velvet Garbage and Cinematic Suicide. However, it is not as fantasmagorical as Velvet Goldmine, and not as awful as I had expected it to be. At least they had the decency to start with the disclaimer, “What follows is (mostly) fiction.” 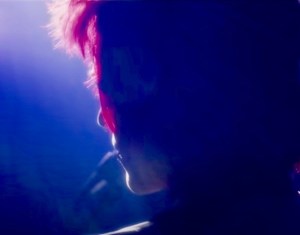 It’s very hard to put aside the physical non-resemblance of the actors to the actual people. Marc Bolan is manly and ugly. Mick Ronson looks like an oversized member of The Sweet -and the evil look on his face when handed a gold costume to wear is hilarious! His funniest line spoken to Bowie is, “You are not an alien, man, you’re from Bromley!” Manager Tony Defries is a bit skinny and not as enigmatic as we perceive him to be. David’s wife Angie is not as striking as she really is. She also inaccurately makes out with Marc Bolan’s girl June, inviting her to a threesome with David.

However, despite the difference in his facial features, Johnny Flynn as Bowie oozes sincerity and manages to evoke a bit of David’s charm and charisma. Watching the film on my phone was probably more beneficial than on a bigger screen. Let’s face it, no human man or woman could ever resemble Bowie. In his Hunky Dory persona (long hair, bippity-bopperty hat and man’s dress) at least Flynn’s silhouette was on target.

After he uttered his initial ‘Hello’ which sounded like Riff Raff from The Rocky Horror Picture Show, Flynn eased into Bowie’s gentle whisper. He also portrays David’s polite nature which co-existed with his determination. What is not conveyed is David’s grace and his great intelligence. He comes off as self-conscious and victimized. 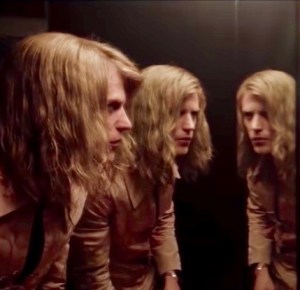 The story is foremost about David’s fear of inheriting his family’s mental illness. Three of his aunts had been institutionalized, and one lobotomized. He thought that he might be next in line. This was the crux of most of his lyrics about alienation and isolation. David’s relationship with his institutionalized older half-brother Terry and visits with him at Cane Hill asylum are woven throughout the film. Whether the dialogue is accurate or not, we get a sense of the horror that David must have gone through, seeing his brother whom he idolized and who had turned him onto the greatest music – confined for having hallucinatory violent episodes.

In a compelling yet fictional scene, David meets with Terry’s doctor upon his brother’s pleading to get him released. The doctor suggests that although schizophrenia is passed on in families, it is not genetic, and that it may be triggered by traumatic rejection of children by parents. David asks, “What about audiences rejecting performers?” The doctor responds, “I don’t think there’s been a paper written on that.”

It’s heartbreaking to see Terry ‘play-acting’ in a therapy session in the asylum to Anthony Newley’s song ‘What Kind of Fool am I?’ after we had seen him earlier in the film joyfully singing along to the same song with David while driving. The film depicts one of Terry’s escapes from Cane Hill – arriving at David’s residence upon his return from America. (Terry eventually died when he escaped again in 1985 and laid himself across the railroad tracks).

The first sign of artistic license (besides some soundtrack music meant to resemble the songs ‘Ziggy Stardust’ and ‘All the Young Dudes’ and later ‘Space Oddity’) is that we see Bowie arriving at Dulles airport in Washington D. C. wearing his Michael Fish dress (which he most likely had in his suitcase and did not wear on the airplane). He is interrogated by an immigration officer who outright asks if he is homosexual. As David famously said many times, but probably not here, “It’s a man’s dress.” It is true that he was held in custody for hours because of his unique look and his clothing.

The real star of the film is American comic Marc Maron as Ron Oberman, the stereotypical brazen and persistent American PR man from Mercury Records who hosts Bowie at his parents’ home (his mom makes schnitzel for dinner) and drives David across America on a promotional tour. (In reality, they went to a restaurant that evening). Oberman is relentlessly enthusiastic despite the fact that David does not have the proper paperwork to perform in the USA. He encourages David through countless disappointments (as if David was unaware that he was not allowed to perform, which is untrue).

I lost count of how many times Ron says, “Come on, man!” Yet, despite their bickering he sincerely likes Bowie’s current album The Man Who Sold The World and chases down journalists to interview his client and  promote his song ‘All the Madmen’ which cannot live up to his huge hit of two years prior, ‘Space Oddity’.

The dialogue between these two visually and characteristically opposing human entities is hilarious! David is unable to answer the question, “Who are you?” He is afraid to be himself. In response to Bowie’s personality crisis, Ron flippantly suggests, “Then be somebody else!” This is the most important line in the film, but to suggest that a PR guy thought of this resolution to Bowie’s entire career instead of David himself is laughable.

During interviews, David completely avoids talking about his music and breaks out into silly mime performances, shocking every reporter and midwestern DJ along the way with sexual innuendos and baffling them with obscure cultural references. PR guy is horrified, tries to corral him and finally gets David that interview in Rolling Stone. Still, Bowie famously mentions that Rock music must be tarted up like a prostitute. Though it is true that David was into drugs, he is already portrayed as a coke fiend on this trip.

It’s cool that the inspirations for the Ziggy Stardust character are mentioned; David tells Ron about Vince Taylor (who also went insane) and Ron tells David about The Legendary Stardust Cowboy. And in this fantasy, Ron also tells Bowie about the raw live antics of Iggy Pop.

One of David’s mime performances is portrayed in his infamous visit to Warhol’s factory, which notoriously fell flat. He also sees The Velvet Underground three months after Lou Reed left the band, and speaks to Doug Yule thinking that he is Lou. Yule does nothing to correct this. A case of mistaken identity prompting David to think that this might be a good career strategy.

The biggest problems are timeline mix-ups, which could have been solved by simply asking any one of the millions of Bowie fans who know the true history. David is toying with his ‘Cracked Actor’ mask from 1974 while wearing his dress for an interview in early 1971. He is wearing Kansai Yamamoto costumes, which in reality he did not acquire until over a year later. He wears a poor semblance of the shiny, quilted Space Samurai – which looks puffy and stuffed with down – and the short white silk kimono (actually worn at Ziggy’s final gig) during Ziggy’s first live appearance at Aylesbury where he was, in reality wearing a perfectly lovely Freddie Burretti suit.

Bowie’s haircut is awful – they could have asked Suzi Ronson to do it right. Old, ugly Marc Bolan is standing at the front of the stage at Aylsebury. And (because of Bowie song rights denial) he performs the Yardbirds’ 1964 version of ‘I Wish You Would’ (first recorded by Chicago blues musician and Bo Diddley band member Billy Boy Arnold in 1955). David later covered it on his 1973 album PinUps. This is especially ludicrous because at that first performance as Ziggy, David’s his own new music was what really set the crowd on fire that night at Aylesbury. Also, we have Ziggy caressing Mick Ronson’s knee rather than… well, you know!

My biggest pet peeve is the overdone lightning bolt logo which Bowie had based upon the German SS (Schutzstaffel) insignia – not upon Duffy’s toaster. Why has it been mutated with an extra appendage?

As the credits roll, we see a re-creation of the July 3, 1973 performance of ‘My Death’ at Hammersmith Odeon – Ziggy’s final gig. Although he is wearing the wrong outfit (couldn’t they have cobbled together the striped Burretti space suit?) the lighting, camera angles and colors are surprisingly correct. Then I see in the credits that the (now eighty-year-old) British cinematographer is Nic Knowland, whom I know as the director of John Lennon and Yoko Ono’s film Rape (1971) despite his long list of other credits. This lends some credibility to the film which precariously sits on the verge of disaster, yet is more watchable than that horrible film about CBGB and the awful biopics about Nico and Queen!

Madelinex.com is a non-profit blog created for educational and research purposes.

Images that may violate copyright or free usage laws will be removed immediately upon request. madelinex@mac.com.