Here are some songs to take you there…

I will begin with Kraftwerk and their electrical pun on the word ‘home’. ‘Ohm Sweet Ohm’ is on their spectacular album Radio-activity (technically their fifth).  The title is also  a clever word-play, merging nuclear activity with music on a radio) which followed up their amazing Autobahn. This track starts off slowly and sweetly, and then becomes the first electro-pop tune ever! As we lost Florian Schneider recently, this one is for him.

“Come On-A-My-House” was originally a novelty song co-written by the man – and the actual voice – behind the vermin vocalists, Ross Bagdasarian (a.k.a. David Seville). It became a huge mainstream hit for Rosemary Clooney on Columbia Records (conducted by Mitch Miller). It spent six weeks at No. 1.  She sings the song in the 1953 film The Stars Are Singing. In the scene, she is mocking the tune.

Ms. Clooney kept the song in her repertoire right up until her passing in 2002, although she claimed to hate it.

Here’s a strange Big-Band Kabuki performance of the song in Japanese: https://www.youtube.com/watch?v=q00vI5AfSl4

We have found the missing link between Sparks and Alvin & the Chipmunks! The title of Sparks third album released in 1974 revised the title ‘Come On-A-My-House’ to Kimono My House. The infamous cover featuring two garish geishas is frequently voted best album cover in the polls. Whereas the glamourized rats achieved vocal perfection through tape speed manipulation, Russell Mael did it all on his own, speeding his way through his brother Ron’s complex compositions. What Sparks favoured – and jumbled – was the song title.

My story about the Kimono My House album cover

AND my story about the songs of Kimono My House: Sparks In the House!

‘I Can Never Go Home Anymore’ is another tragic heart-wrenching drama on a single by The Shangri-Las who also gave us ‘Leader of the Pack’. This was released in 1965 and produced by Shadow Morton. It’s mostly a spoken story of a girl who leaves home for a boy – never returning to her mother who dies of loneliness. It incorporates a sad lullaby sung to the girl by her mother. This is even more heartbreaking than The Supremes ‘Love Child’ and its follow-up, ‘Livin’ In Shame’ in which the girl repents for how badly she had treated her now deceased mother.

‘There’s a Ghost In My House’ by R. Dean Taylor was written by Holland/Dozier/Holland. It was not a hit at first when it was released in 1966, but it was a smash on the Northern Soul scene in England in 1974.

‘Going Home’ is an 11-½ minute track by the Rolling Stones that turns into an improv jam session. It just keeps getting better and better. It’s on the UK version of their 1966 album Aftermath. It was one of the longest rock songs ever recorded at the time. This has one of Jagger’s best vocals.

‘Homeward Bound’ was a 1966 single by Simon & Garfunkel. It’s also on their 3rd album Parsley, Sage, Rosemary and Thyme.

One of my favorite Beatles songs is ‘When I Get Home’ from A Hard Day’s Night with the scorching vocals of John Lennon!

‘She’s Leaving Home’ is on The Beatles’ 1967 album Sgt. Pepper’s Lonely Heart’s Club Band. The song is about a suburban teenager named Melanie Coe who left her comfortable home in defiance of her parents. Melanie had met the Beatles on a TV show during a miming contest. Paul picked her as the winner and gave her an autographed album. Coe later moved to California and dated Burt Ward (Robin of Batman). There is also a great Rolling Stone article about her online.

Another amazing song about memories of home is ‘Reflections of My Life‘ by Marmalade, which I have written about at length here… I especially love Dean’s re-recording of the song in 2014 – linked in my story.

MY STORY – Take Me Back – ‘Reflections of My Life’
https://madelinex.com/2019/05/08/about-a-song-take-me-back-reflections-of-my-life-marmalade/

‘Roadhouse Blues’ is on Morrison Hotel by The Doors released in 1970.  Alice Cooper alleges that Jim wrote the opening line when he saw Alice drinking beer in the morning. This is the ultimate driving song, with the haunting line,

The future’s uncertain and the end is always near

And here is a cool Stooges/Doors mashup – ‘Roadhouse Dog’: https://www.youtube.com/watch?v=fuHcPUPwM0A

“A house is not a home” is the theme of the song ‘One Less Bell to Answer’. This was written by Burt Bacharach and Hal David in 1967 for the great Keely Smith. It was later recorded by Rosemary Clooney in 1968 and was a platinum single  in 1970 by The Fifth Dimension, sung by Marilyn McCoo.

The title track of The Stooges album ‘Fun House’ is a wild jam with Iggy Pop yelping and yelling, “Lemme in / I came to play.”  The album was remastered again for its 50th anniversary (2020) in a lavish and expensive vinyl box set.

More telling lyrics are reflective of the cultural climate,

“Livin’ in division in a shifting scene.”

Crosby, Stills, Nash and Young had a 1970 hit with ‘Our House’ from their album Deja Vu. The lyrics by Graham Nash are simple and beautiful, about a cozy afternoon together with his then girlfriend Joni Mitchell at their home in California.

“I’ll light the fire while you place the flowers in the vase that you bought today,”

Roxy Music released their second album For Your Pleasure in 1973. The epic extravaganza ‘In Every Dream Home a Heartache’ about a blow-up doll (the singer’s ‘disposable darling’) is included on the album.

My Story: My Pleasure!

The only song I like by Lynyrd Skynyrd is ‘Sweet Home Alabama’. This is on their second album, Second Helping released in 1974.

‘I’m Going Home’ is sung by Tim Curry’s character Frank N’ Furter on The Rocky Horror Picture Show film soundtrack. In his case, ‘home’ is the planet Transsexual Transylvania. The play had been a success in London and in New York. The cult classic film, with the soundtrack by Richard O’Brien (who played Riff Raff in the movie) was released in 1976. The funniest thing that my mom ever did was to throw a piece of toast at my head when I was listening to the album for the 1,000000th  time in my bedroom. Keep an eye out for Tim’s upcoming new book – to be published in 2021!

‘Safe European Home’ is on the album Give Em Enough Rope by The Clash released in 1978. It was their killer second album. This was especially great to hear live with Topper Headon’s machine-gun drumming. The lyrics reflect their frightening time and feelings of alienation in Jamaica while writing the album.

‘Set the House Ablaze’ is a wildfire song by The Jam, on their 1980 album Sound Affects. This 3-piece was the loudest band I’ve ever seen live. I saw them so many times that my ears may never forgive me!

Madness released a gloriously joyful song about home and family called ‘Our House’  in 1982. If there were such a thing as standard tunes coming out of the 80s, this would qualify as one of them. Also in 1982, Madness also released ‘House of Fun’.

The Talking Heads song title ‘Burning Down the House’ is a phrase inspired by P-Funk’s (Parliament Funkadelic) audience chant of ‘Burn down the house!’ The song is from Speaking In Tongues, Talking Heads’ fifth album released in 1983.

‘Burning Down the House’ Remaster:  https://www.youtube.com/watch?v=bgJ-hyzl6jg

The power ballad ‘Home Sweet Home’ was a big hit in 1985 by Motley Crue. It’s from their album Theatre of Pain. The only other song I like by them is ‘Time For change’ from the album Dr. Feelgood which has a similar chord progression to Mott the Hoople’s ‘All the Young Dudes’.

‘Housequake’ is on the fabulous double album Sign O’ The Times by Prince released in 1987. ‘Shut up already, DAMN!’

On his 1990 album Brick by Brick, Iggy Pop recorded a great song called ‘Home’ with Slash from Guns N’ Roses on guitar.

‘Mama, I’m Coming Home’ is on Ozzy Osbourne’s sixth studio album No More Tears, released in 1991. This was a song to his wife Sharon, vowing to return home. He intended this tour (titled No More Tours) to be his final one. However, after a short time at home with Sharon and his kids, the stage beckoned him again. After being rejected to play at festivals, he created Ozzfest, which was presented each year from 1996 to 2018.

The amazing voice of American soul singer/songwriter Howard Tate (1939-2011) whose amazing voice has been compared to Al Green. Tate retired from the music industry in the late 1970s. In the 1980s he became a homeless drug addict, and a decade later became a drug counsellor and a preacher. He revived his career in 2003. The funky, groovy ‘Homewrecker’ is from 2008. Tate died of leukemia in 2011.

‘How Do You Think It Feels?’ Howard Tate – Lou Reed on guitar and The Steve Weisberg Orchestra (2006).

Check out the drumming which is in the style of Lou’s ‘Walk on the Wild Side’.

“Lou, can you help me right here?”

‘How Are You Getting Home?’ is on the wonderful 1975 Sparks album Indiscreet…

My story all about the Sparks album, Indiscreet:

Also by Sparks, we have ‘My Baby’s Taking Me Home’  which begins with simple piano, and an old-fashioned megaphone effect on Russell Mael’s vocals, but the sound swells, becoming more lavish and ultra-modern as the song progresses. The multi layering of Russell’s voice seems infinite as the song’s title is repeated over and over. It’s on their 2002 album Lil’ Beethoven.

My story about the Sparks album Lil’ Beethoven: https://madelinex.com/2002/12/25/sparks-lil-beethoven/

‘The Old House’ is a gorgeously stunning piece about the ghosts of her parents was recorded by Marianne Faithfull on her 2011 album Horses and High Heels. It features the unmistakable scathing guitar of LOU REED!

Elton John recorded ‘Home Again’ for his album Diving Board in 2013. He performed it on the Emmy Awards, announcing it as a song that reminds him of Liberace who had a lavish home which he loved so much.

Yoko Ono uses her song ‘Remember Love’  (the B-side of ‘Give Peace a Chance’ – 1969) as the soundtrack to her short movie My Hometown.

MY HOMETOWN
by Yoko Ono

Get a map of the world.
Pin a little flag on a place on the map you’d like to go to.
The place you’ve put your flag is your hometown.

Let’s find a way to make this flag something you’ll be proud of.
Start by giving your hometown a name you want to call it by.
Find out some things about your hometown
Make a scrapbook of images and people from your hometown, and add your comments about them
Look after your hometown in your mind.
Send it lots of love.

Quietly tell your best friends about the problems of your hometown, and ask them to solve them in their minds.
Put up some nice photos of your hometown in your room.
Write a diary about your hometown.
Keep sending your powerful energy to your hometown until more people start to smile and laugh and enjoy themselves.

Keep going until your efforts start to make things better in your hometown.
One day we’ll realize that all the towns in the world are someone’s hometown. 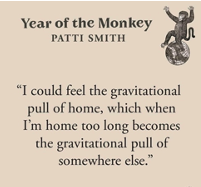 Images that may violate copyright or free usage laws will be removed immediately upon request.