© Madeline Bocaro, 2021. No part of this site may be reproduced or re-blogged in whole or in part in any manner without permission of the copyright owner.

Janis Joplin was a forceful whirlwind, spewing out the blues in a way that nobody had done before.

Her blues were completely authentic.

However, this force-field was a shield – put up by a fragile and sensitive girl,

who created an alter-ego named Pearl.

This was the title of her final album, released fifty years ago today on January 11, 1971.

This was who she wanted to be.

Reflecting on her incredible legend and continuing presence of Janis in our lives to this day, it’s hard to believe that Pearl was only her second (and final) album. It was released three months after her death at age 27 on October 4, 1970, spending nine weeks on the Billboard 200 chart. It was eventually certified quadruple platinum. 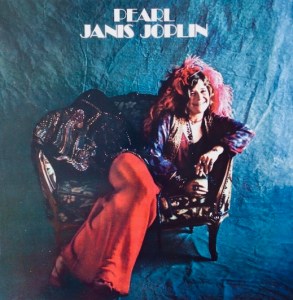 In the dimly lit Pearl album cover photo taken by Barry Feinstein, Janis reclines on a small couch wearing a cascading crown of feathers, drink and cigarette in hand. She is smiling!

The album was recorded at Sunset Sound in L.A. Some of the album’s nine songs were recorded live during her shows in Canada with touring group, the Full Tilt Boogie Band.  ‘Trust Me’ was composed by Bobby Womack for Janis. ‘Me and Bobby McGee’ was written by Kris Kristofferson. Janis played guitar on the track. It was her only No. 1 single. The album features the incredible ‘Cry Baby’, the perfect showcase for the amazing vocals of Janis.

The gospel-infused ‘Mercedes Benz’, written by Janis, Bobby Neuwrith and Michael McClure. I would love to hear the voice of Janis in a multi-tracked gospel choir backing herself on this, although it is a gorgeously simple arrangement. This was her final recording, three days prior to her death.

– especially the clips of Janis talking…

Janis died before recording the vocals for ‘Buried Alive in the Blues’ – which could have been her epitaph. It remains on the album as an instrumental.

One of the last things Janis did in her life was to record a birthday message to John Lennon. She and her band did a rendition of the Dale Evans Rodgers song ‘Happy Trails to You’, which sadly includes the lyric, “until we meet again.” John received the tape a few days after Janis passed away. It’s incredible to hear her singing a straight non-bluesy vocal. She sounds like Mae West or Zarah Leander!

Janis defiantly declared on The Dick Cavett Show, four months prior to her death, that she would be attending her high school reunion, which was filmed. She intended to show her former classmates that this person whom they scorned had become a superstar. In all her rock n’ roll finery and feathers, she was rejected by them once again, and was visibly hurt.

Janis sang Rodgers and Hart’s  1935 song ‘Little Girl Blue’ during her 1970 tour – which as a bonus track on the 1999 reissue of Pearl. This song (sung by Doris Day in the 1962 Disney film Jumbo) became the title of a wonderful documentary film about Joplin’ life. Please watch the film Little Girl Blue for her true, heartbreaking story.

Pearl was reissued and re-mastered on CD in 1999, including unreleased concert recordings from 1970. Another reissue in 2012, The Pearl Sessions includes  alternate takes. A third 2-disc reissue by Columbia Legacy was released in 2005 with more bonus live recordings from 1970.