by HOWARD TATE – featuring LOU ON GUITAR!  linked below).

© Madeline Bocaro, 2020. No part of this site may be reproduced in whole or in part in any manner without permission of the copyright owner 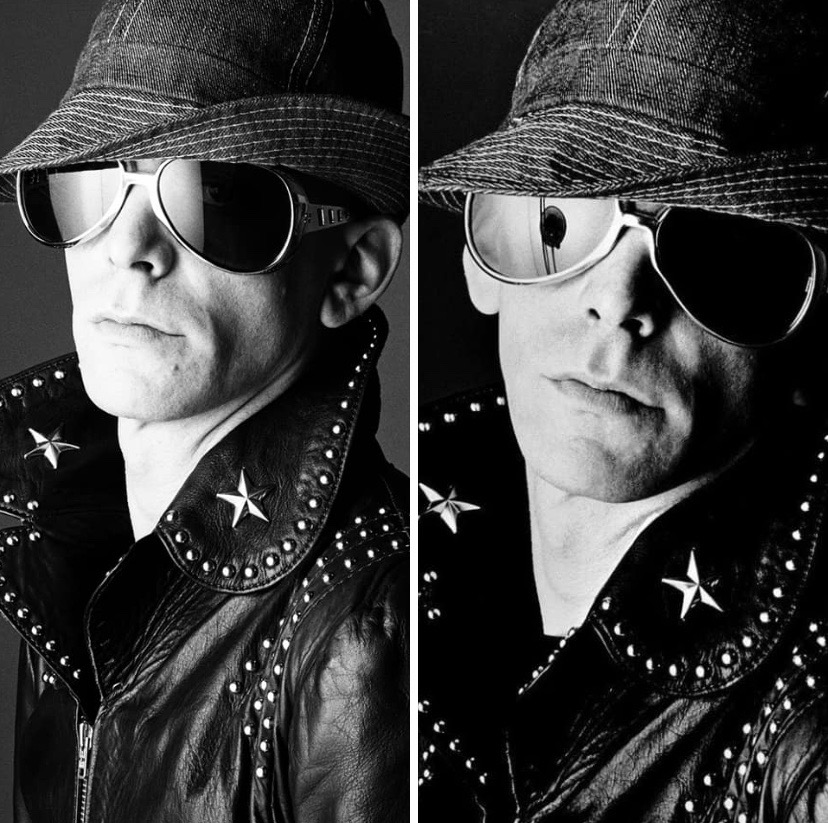 In 1972, after his years with The Velvet Underground and one ignored solo album, Lou Reed skyrocketed from the gutters of the underground to the glimmer of Glam Rock.  David Bowie and Mick Ronson’s stellar production of Lou’s second solo album Transformer made it an instant hit. The album has since become a revered classic.

Lou’s follow-up to Transformer was Berlin (released July 1973). The songs illustrate a depressing debacle of decadence and depravity. While Reed considered Berlin his masterpiece, critics and fans considered it commercial suicide. Decades later, the album finally received accolades for its brilliance. Lou performed the entire album live in 2006 (so successfully that he went on tour) reunited with many of its original players, a choir and the album’s producer Bob Ezrin wielding a baton.

Bob Ezrin’s musical arrangements of Berlin are beautiful and sometimes haunting. The songs are lyrically minimal and striking. A melancholy orchestral score illustrates a couple’s doomed romance. Prostitution, drugs, betrayal, beatings, suicide, apathy – the whole gamut of Velvet Underground song topics converged in the lives of two wretched people in a decadent city. All of this is related by Lou in his detached monotone narrative.

Although the entire Berlin album is a masterpiece, ‘How Do You Think It Feels?’ is quintessential Lou. It’s one of the album’s few rockers.  Lou sings in the first person of a succinct, articulate drug addict. This is obviously not his first song about the subject, but it is rendered unique by Ezrin’s score and arrangement.

Lou sings from experience – which is why this sounds so sincere and real. He fully conveys his desperation to someone like myself, who has never been high in my life. His VU songs, ‘Heroin’ and ‘White Light, White Heat’ engage us so completely that we feel the rush and the release metaphysically.

But this song is not about the drug. It’s about the loneliness,

the hunt and the craving

With only these few poignant words, Lou conveys a wretched and tortured existence;

“How do you think it feels

When you’ve been up for five days…

‘Cause you’re afraid of sleeping”

Not only is this an incredible Reed composition, but the players take the piece beyond his lyrical brilliance. The highlight is the stellar guitar play between Steve Hunter and Dick Wagner – later immortalized on the live albums made from Lou’s tour. We have the essential sax and trumpet of the Brecker Brothers, Jack Bruce on bass and Aynsley Dunbar on drums.  The 1973  live version of the song was omitted from the Rock ‘N’ Roll Animal album released in 1974 and also from Lou Reed Live released in 1975. (Both live albums include songs from two back-to-back concerts at The Academy of Music in NYC on December 21, 1973). The (faster) live version was finally released on a Japanese reissue of Rock ‘n’ Roll Animal in 2006.

Here is a beautifully orchestrated bluesy/jazz interpretation by American soul singer/songwriter Howard Tate (1939-2011) whose amazing voice has been compared to Al Green.

Howard Tate WITH LOU REED on guitar and The Steve Weisberg Orchestra (2006).

(Check out the drumming which is in the style of Lou’s ‘Walk on the Wild Side’).

“Lou, can you help me right here?”

‘How Do You Think It Feels?’ Howard Tate:

Howard Tate retired from the music industry in the late 1970s. In the 1980s he became a homeless drug addict, and a decade later became a drug counsellor and a preacher. He revived his career in 2003 and covered Lou’s song in 2006. He died of leukemia in 2011.

“Following a series of misfortunes, including a divorce and the death of his daughter in a house fire in 1976, Tate dropped out of music and turned to drugs and alcohol.

“I turned to cocaine, and it was the worst thing I could have ever done,” he told the Philadelphia Enquirer in a 2004 interview. “It destroyed my willpower. I became homeless, roaming around those drug neighborhoods in Camden. I actually thought I was going to be found dead in an alley. It was like I was waiting to die.”

“How do you Think It Feels?”

Read about other songs in my category