I’m so tired of trying to find the deeper meaning in a song.

It’s time to take a break and listen to some wonderful nonsense! 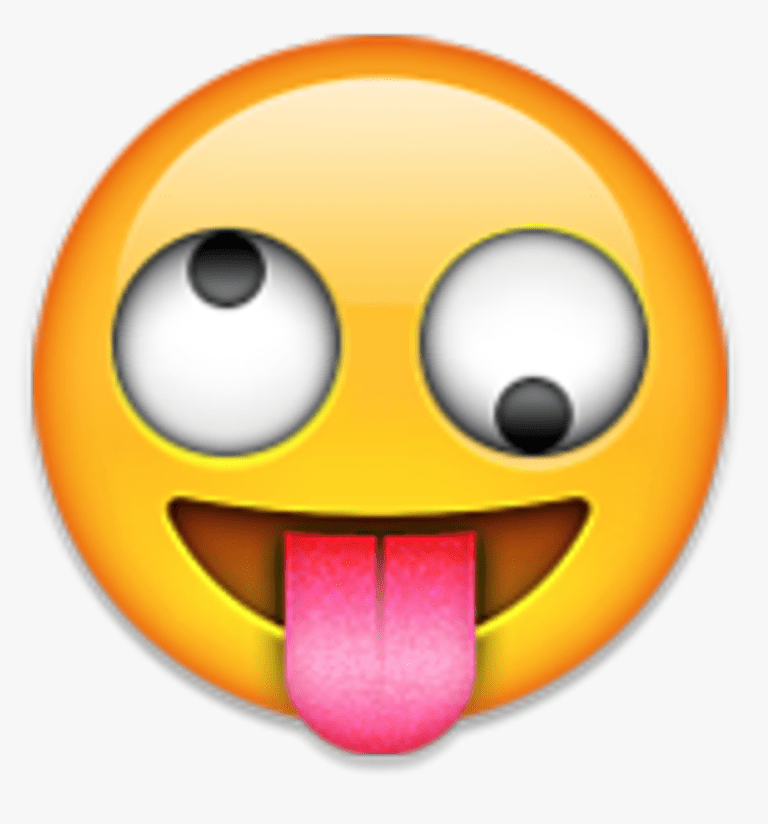 ‘Wiffenpoof Song’ was a popular tune sung by a group of varying members (seniors at Yale University) called The Yale Whiffenpoofs. This was one of the first-ever acapella groups, formed in 1909. The lyrics speak of little lambs who have lost their way…

The speedy, jazzy ‘Witch Doctor’ by Alvin and The Chipmunks was a single released in 1958 on the album which soundtracked the television cartoon of the same name, The Alvin Show. I love the echoing sound of David Seville’s voice (before he morphs into The Chipmunks via tape speed manipulation). “David” is actually Ross Bagdasarian, who co—wrote the Rosemary Clooney hit ‘Come On’ A My House’ which inspired Sparks’ 1974 album title, Kimono My House. The Chipmunks would go on to record ‘Witch Doctor’ several times, but this is my favorite. The verses do tell a story, but the choruses are in the Witch Doctor’s language… 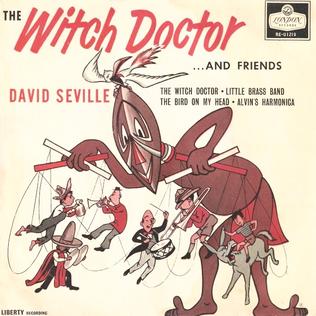 ‘Be-Bop-a-Lula,’ now a classic rock tune, was recorded 1956 by Gene Vincent and His Blue Caps. This was co-written with his manager. Vincent sings this undeniably incredible tune in the film The Girl Can’t Help It starring Jayne Mansfield.

The title of the classic Little Richard song ‘Tutti Frutty’ means “all fruits” in Italian. This is the song that is said to have kick-started rock n’ roll in 1955. It originally had obscene lyrics. The Beatles performed ‘Tutti Frutty’ live early in their career, with Paul McCartney on vocals. Of course. The Beatles have their own nonsensical lyrics in the song ‘I Am the Walrus’ “Goo goo ga joob,” and their made-up language in ‘Sun King.’

My favorite version of ‘Tutti Frutty’

‘Eep Opp Ork Ah-Ah (Means I Love You)’ is from The Jetsons television show (1962).  George Jetson is upset when his teenage daughter Judy idolizes a pop star, and wants to win “A Date With Jet Screamer” (the name of the episode). George switches the set of lyrics that Judy submits to win the date (replacing them with his son Elroy’s secret code, “Eep opp ork ah-ah”). The contest was won! George Jetson himself plays a mean jazzy drum intro to the song, along with the Jaztronauts! The tune was co-written by William Hanna of Hanna Barbera cartoons

Hanna-Barbera brought in a special animator to craft the colorful, surreal sequence for Jet Screamer’s song “Eep Opp Ork Ah-Ah”It was a “revolutionary” creation and essentially one of the first television music videos.

The song was covered by The Dickies on their fourth album Second Coming in 1989, and by The Violent Femmes in 1995. 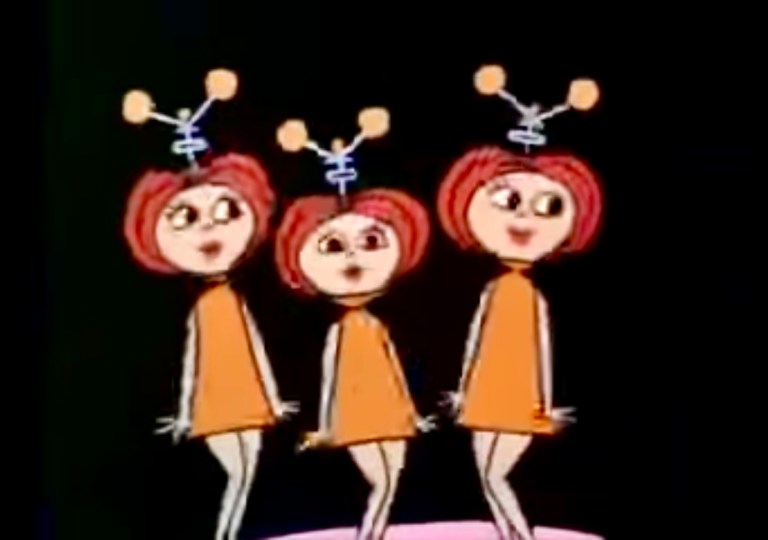 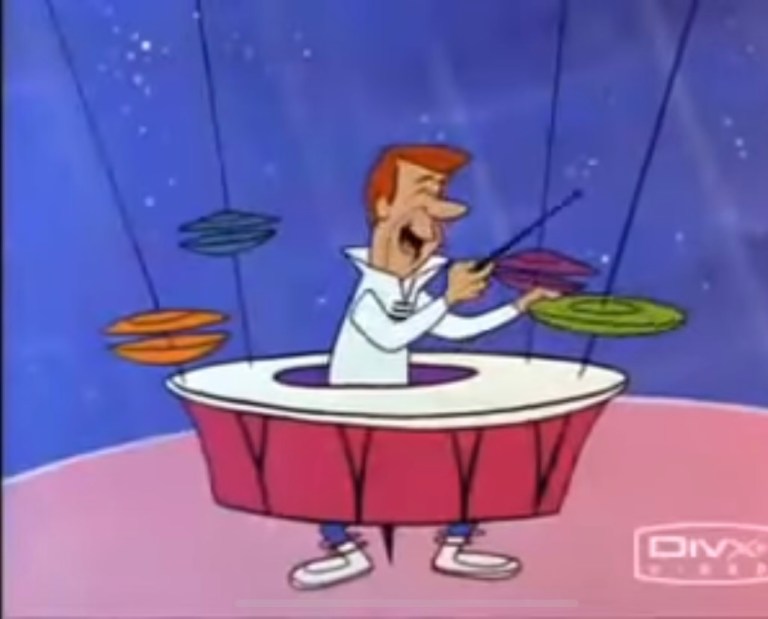 ‘Surfin’ Bird’ was recorded by The Trashmen. It was released as a single in 1963, reaching No. 4 on Billboard’s chart! This is actually the merging of two songs by The Rivingtons (‘Papa-Oom-Mow Mow’ and ‘The Bird‘s the Word.)’ There would have been a hilarious plagiarism hearing if the Trashmen had not relented and given song-writing credit to The Rivingtons!

I love one of the comments on the video: “If this isn’t played at my funeral I’m not dying.”

There are also some great cover versions! My favorites are by The Cramps (on their first-ever single released in 1978, and later, on their Gravest Hits album in 1979). It was so great seeing them perform this live, with Lux practically swallowing the microphone!  The Ramones version on their 1977 album Rocket to Russia was equally stunning!

‘Da Do Ron Ron’ by The Crystals had these nonsense lyrics filling in the blanks between verses, as to what might have happened after the lines, “Met him on a Monday and my heart stood still… / “and when he walked me home…” This innocent song might have sounded a lot different if real words were inserted where they belonged! It was co-written by Barry/Greenwich/Spector and released in 1963. This has a great sax solo!

‘Do Wah Diddy Diddy’ is a classic Barry/Greenwich tune. It was first recorded by The Exciters. It was later popularized with a No. 1 hit by the band Manfred Mann in 1964.

‘Supercalifragilisticexpialidocious’ is an obnoxious song on the Mary Poppins soundtrack album from 1964. Sorry, but if I did not include this, hundreds of people would contact me personally to tell me that I left it out.

Soupy Sales, sings a song about a word that they whisper all over Turkey – ‘Pachalafaka.’ This was the B-side of his hit dance single ‘The Mouse’ in 1965.It’s from his album Soupy Sez Do the Mouse and other teen hits. The original recording was on an album entitled Terribly Sophisticated Songs: A Collection of Unpopular Songs for Popular People. The songwriter was American composer Irving Taylor, and the album was conducted and arranged by Henry Mancini. Jim Henson sang the song on The Muppet Show in 1977 during the Muppets’ visit to Turkey. 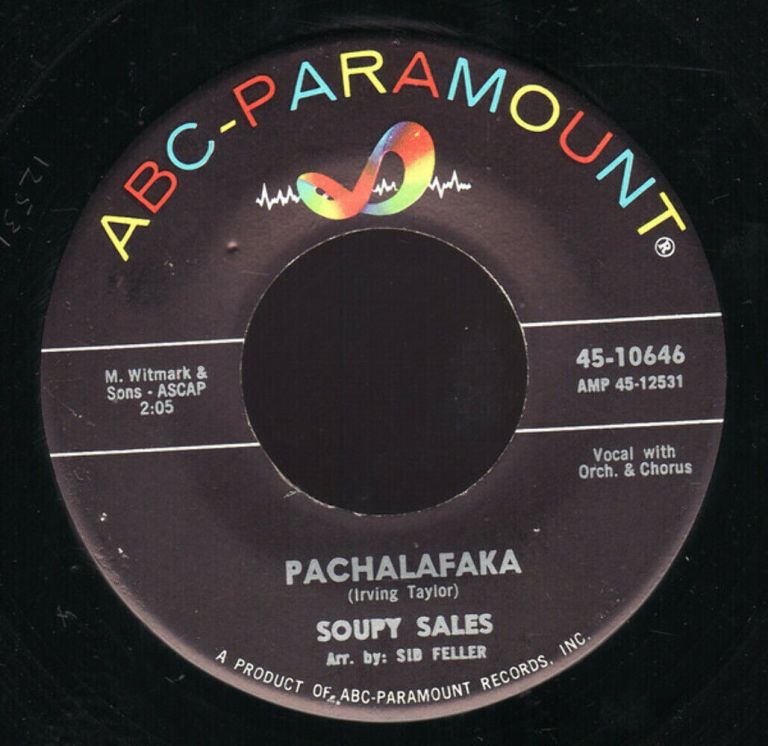 ‘The Oogum Boogum Song’ was released in 1967 by R&B singer Brenton Woods. This slow dance groove is so 60s!

When you wear your high heeled boots with your hip hugger suit
It’s all right, you’re outta sight
And you wear that cute mini skirt with your brother’s sloppy shirt
I admit it, girl, that I can dig it…

‘Snookeroo’ is on Ringo Starr’s fourth solo album Goodnight Vienna released in 1974. It was written by Elton John and Bernie Taupin. “Born on the eve of Halloween, Snookeroo is my name!” The album’s title means “It’s all over” in Liverpool slang. The cover features the robot Gort from the classic 1951 Sci-Fi film The Day the Earth Stood Still. Ringo emerges from the space capsule rather than the character Klaatu. There was a big promotional event for the album which included a parade in front of the Capitol Records building in Los Angeles, a spaceship replica and the robot atop the building. This album has many great guest musicians, including Harry Nilsson, Klaus Voormann, Billy Preston and Robbie Robertson. The b-side of the single release was ‘OO Wee.’ 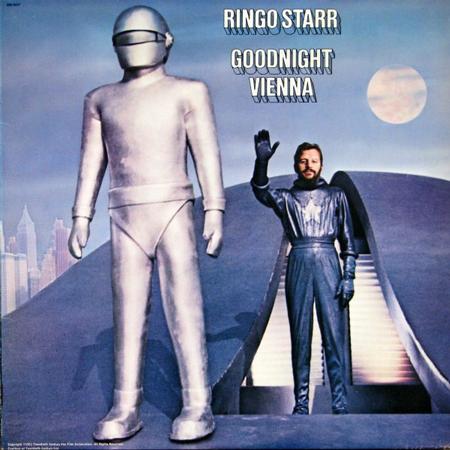 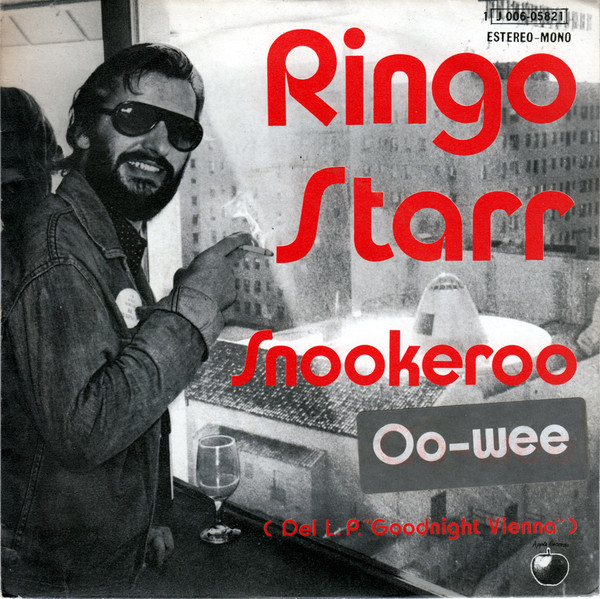 ‘Wangdipoofenawah’ by Jet has the most beautiful introduction a nonsense song ever had. Then it breaks out into a magnificent pop tune. Hector Zany has caught it!

The song is on Jet’s self-titled 1975 debut (and only) album. Written by Martin Gordon after his stint as the bassist of Sparks. Other band members include Chris Townson (John’s Children, Jook), Andy Ellison (John’s Children) and David O’List (The Nice, Roxy Music). They split up and later formed Radio Stars. Jet’s only album was reissued on CD with outtakes in 2010 by RPM Records 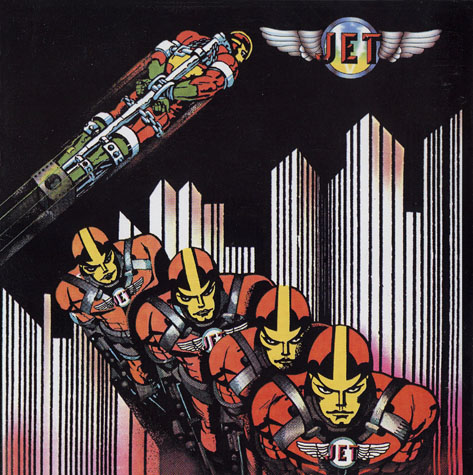 ‘King’s Lead Hat’ is a wonderfully weird song by Brian Eno, released in 1977. I love the spacey noises, which are trademark Eno! The overall sound of this prefaces Bowie’s album Lodger, which Eno worked on. It’s on his album Before and After Science. The title is an anagram of the band name Talking Heads. (Eno went on to produce three Talking Heads albums). It was remixed (faster) and released as a single in 1978. It was covered live at the Lyceum by Ultravox in 1980 and released on the B-side of their  12- inch single, Passing Strangers. Talking Heads released a live album titles Stop Making Sense in 1984 during which he wore “The Big Suit” which became as popular as Seinfeld’s “Puffy Shirt.”

In subsequent verses, Eno goes on to draw bananas on the bathroom walls in New Delhi and Hong Kong. 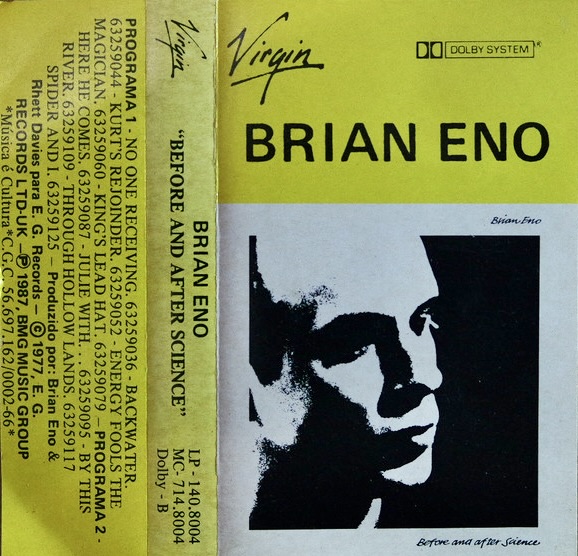 ‘MMMBop’  by Hanson is a great pop tune about not wasting time.

madelinex.com is created for educational and research purposes.