Olivia Harrison radiated love and light as she spoke about her husband, and her book of poems Came the Lightening (Genesis Publications) last night in New York City. It is immediately obvious that she is George’s soul mate.

The inspiration to write the book specifically as poetry was the result of an episode of amnesia, which Olivia says, was actually quite pleasant. There was no past or future to consider – only the present, which imbued her with a lightness of being. When she returned to the present day, a poet friend prescribed that she read nothing but poems for the next five days. She says this was the best prescription and cure she had ever received.

She was interviewed by the great Martin Scorcese (who celebrated his 80th birthday last week. They discussed working together on the 2011 HBO George Harrison documentary (Living in the Material World), about their love of film and some of their preservation projects. 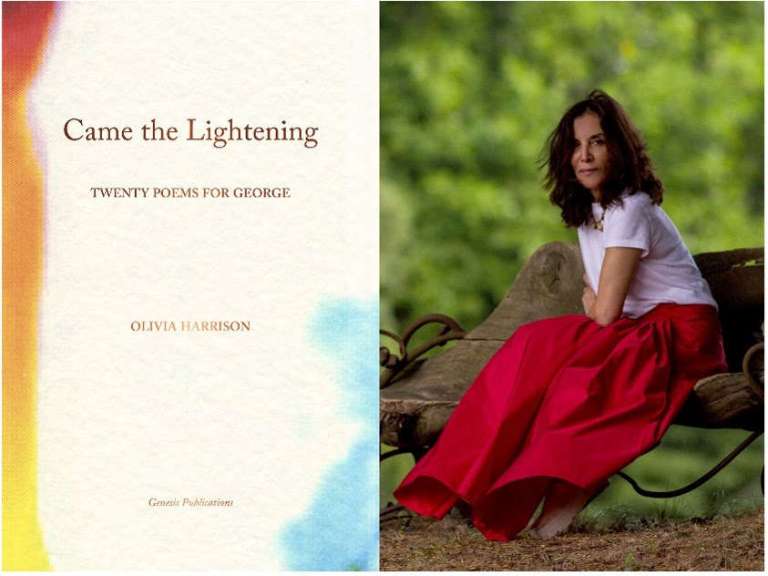 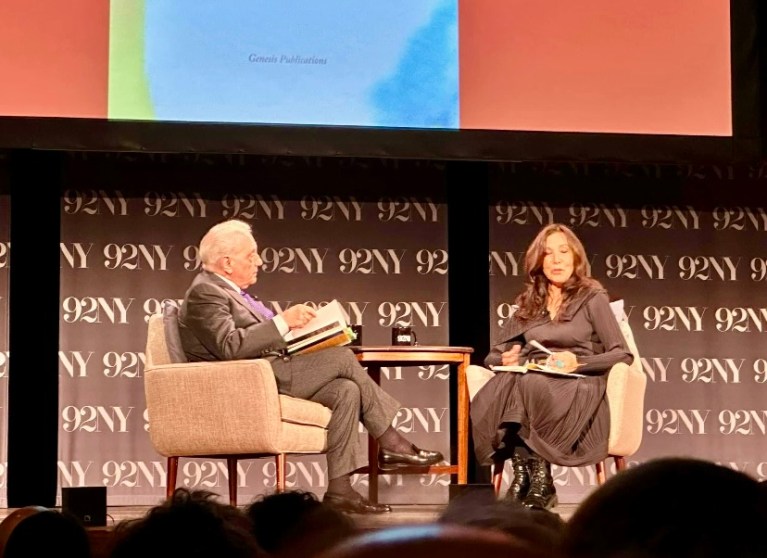 Olivia read some of the twenty poems from her book. Her writings speak of deep love and devotion, and of her own grief and transformation during George’s illness and after his death, until she was finally able to let go. The poems are mostly set in the vast 62-acre gardens at Friar Park which George tended to – even more meticulously and fervently when he was diagnosed with cancer. As he faded away, the gardens grew more and more beautiful. After a difficult mourning period, Olivia was able to take over, and the gardens flourished even more. She spoke of trees with reverence, as the living beings they are. How they travel across continents by dropping seeds which are carried by the wind. How we are all traveling.

The night of the frighting and nearly lethal assault by an attacker in their home in England in 1999 was discussed. Olivia described the non-entity which imbued a loving and gentle woman with the strength and rage to fight against a knife-wielding intruder, and protect her beloved and herself. In the aftermath, she was bewildered and upset upon discovering that she was capable of hurting another human being, although it was in self defense. Her guilt was absolved when she experienced a spirit (her protector and savior) leaving her body with the unspoken words, “I’m leaving now. You are safe.”  She had been determined not to let George die at that time, and in a violent way, although he was severely injured. Luckily, Olivia saved his life, although it would only be for two more precious years when George died in 2001 at the age of 58. We learn that beyond the fact that John Lennon had been killed, George was even more upset that John was not allowed to pass in a natural way, on his own terms. It is still hard to fathom that two members of the most beloved band in the world were attacked by murderers. 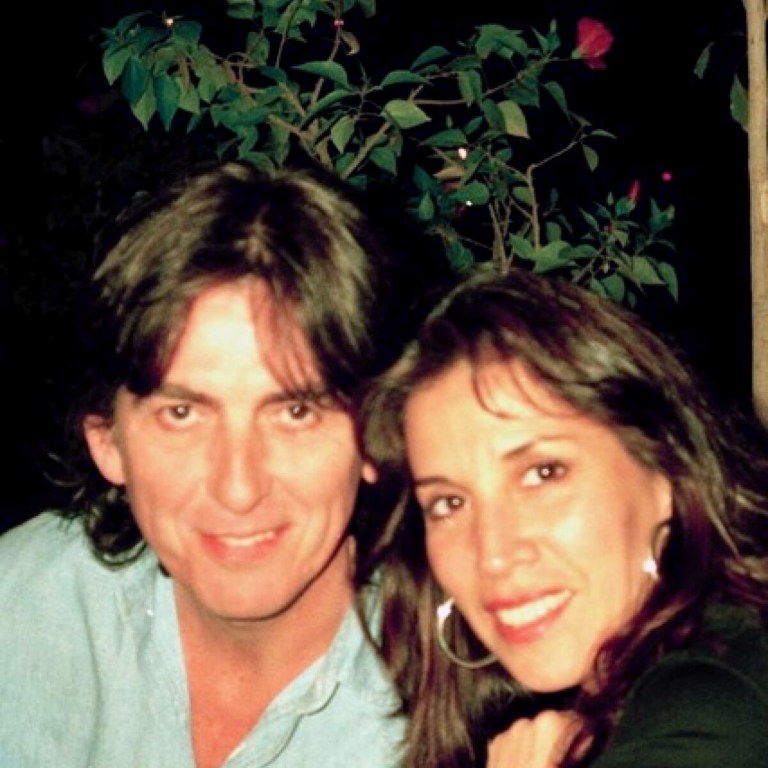 The book includes contributions from Henry Grossman, Sue Flood, Mary McCartney, Marcus Tomlinson, Klaus Voormann, and Brian Roylance. Some of the titles are “End of the Line,” “My Arrival,” “Without Hummingbirds,” “Keepsakes,” and “Carved in Stone.”

“Only the past is carved in stone

So that it will not be forgotten.

This sand, once granite,

covers and clings to my wet feet.

Ancient geology as I walk to the sea

Each grain a memory being set free

to solidify and be carved again

Marking the time once more

So the past will not be forgotten.”

Many of the poems were read aloud by Olivia. They are not obtuse and metaphorical, like most poetry. They are clear, relatable and beautiful descriptions of her emotions, grief, love and transformation in perfect words. She is driven, guided and healed by elements of nature. Olivia never left Friar Park, the home and gardens that George loved, just as Yoko has remained in the home she shared with John and their son Sean in New York City, the Dakota.

At the shore of the Ganges in India, during the final ceremony for George, Olivia and their son Dhani were guided by the swami to let go of everything. It was hard, but ultimately that was where freedom lived. Across the Ganges, in the distance, she noticed a compound of buildings. She asked about it, and was told that it was the compound of the Maharishi – where George had found his path all those years ago.

my message in a bottle has reached dry land.

Words about our life, his death

but mostly love and our journey to the end.”

Thanks to Olivia for the enlightening. 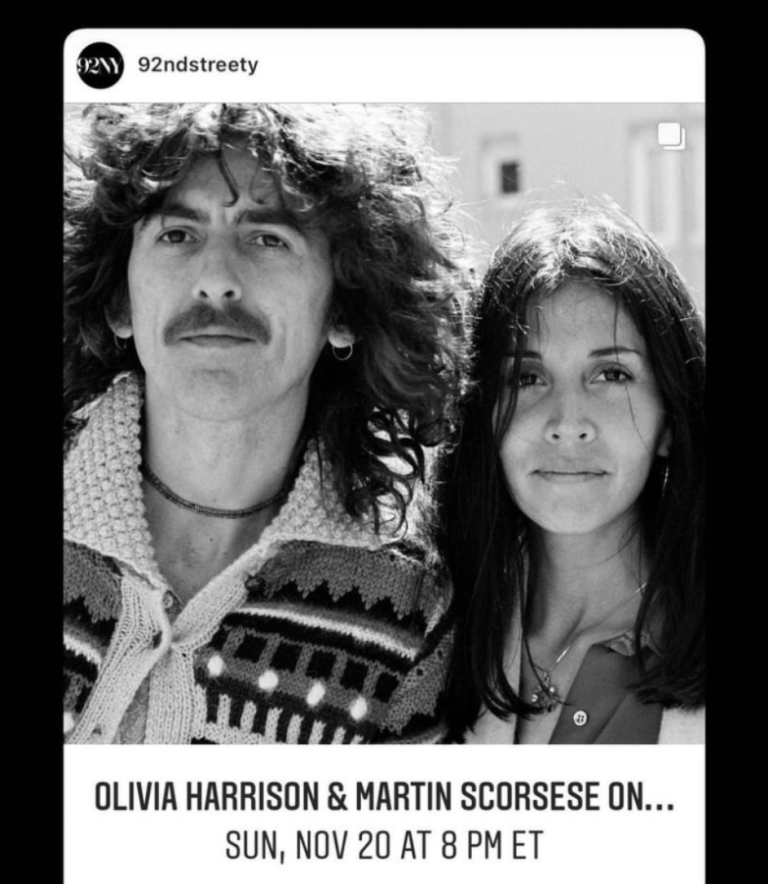