There are a few places on earth that I never want to visit; Iraq, Africa, Vietnam and HARLEM!!  But the Stooges were there, and I had to leave my safe little bubble and risk death to heed the calling. Nicole met me at Penn Station and we took the A train all the way up to 175th Street.

The United Palace theatre is really old, ornate, gaudy and gothic. Very creepy. It was huge and extremely crowded. You couldn’t even walk past anyone in the lobby or balcony – wall to wall bodies Our 9th row seats were OK, but. I landed in the front with a nice barrier in front for support. It was too brutal. Iggy had almost the entire audience onstage for 2 songs ‘Real Cool Time’ and ‘No Fun’ after yelling out, “Invade the stage!” and “Fly!” He was in the crowd more than out, tipping forward face-first (always trusting he’d be safely caught) bleeding, whirling, raging, spitting – basically the sick animal we know and love.

The Stooges were incredible. Thankfully, the set was mostly songs from the first two albums, and also from Skull Ring and The Weirdness which sound much better live. Ron casually blends in, wearing a camouflage shirt, droning and blaring away on guitar like a genius. Scott is the tribal rock on drums. Such a pleasure to witness the Asheton brothers. And nobody else but Mike Watt belongs there on bass.

During “Fun House” Iggy moaned, “I’m sick!!!! I’m in pain!” and began screaming and howling like a deranged rhinocerous. It sounded like Godzilla wrecking a train, with Steve Mackay’s wild skronking accompaniment on sax! True greatness. 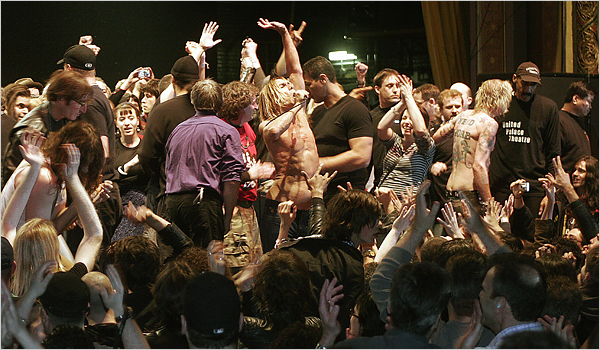 One reviewer called Iggy ‘Gumby on crack’. Perfect! I must be getting old, because every time he came near me I wished he would go elsewhere and jump on other people’s heads and not mine!  I watched the entire encore through a two-foot-high blue Mohawk – an interesting effect that I could have done without.

I don’t think I can endure another Stooges gig. It was so brutal that it’s hardly any fun. You can’t concentrate on the show without dodging flying bodies and worrying if you’re going to be trampled. It’s like all the screaming fans at Beatles shows – drowning out the music. If you’re in such awe of your idols, wouldn’t you just be paralyzed an awed in amazement and drink in every unblinking moment of pure joy?! That’s what I do.

Iggy’s old roadie who looks like Popeye is still with him – for decades now! I remember the times when Ig unknowingly lassoed Popeye’s neck, dragging the poor guy across stage with him while he was choking. Such great comedy! I marveled at the fact that this guy is still around, doing this night after night. Also, that Iggy is still doing it.

Of course, at one point, Iggy was bleeding –it seemed like a cross was cut into his chest by the mic, which just points up how sincere he really is. Nobody else like him – now or ever! He repeatedly invoked the phrase “I am you” As he often does. Although he may see himself as one of us, he is clearly superhuman.

Iggy looked amazing when he first came onstage (before getting all sweaty, bloody) – so much better than he does in photos. His hair was highlighted and shiny (imagine him sitting in a salon thumbing through a copy of Women’s Day with those foil papers highlighting his hair!!)