© Madeline Bocaro 2016. No part of this site may be reproduced or re-blogged in whole or in part, in any manner without permission of the copyright owner.

Tired of England, Ron and Russell spent some time in New York City. 1976 yielded their sixth album, Big Beat. This was Sparks’ American rock n’ roll album, again with a completely different band. It was their final record for Island in Europe. (It was released by Columbia Records in America). Some considered Big Beat to be Sparks’ stab at punk rock, however, it’s sleekness and crisp, clean production by Rupert Holmes (of Barbra Streisand fame) was far too pretty for punk. All of the songs rocked, and provided fantastic live material. Ronald traded his Roland for a grand piano on the album and tour. 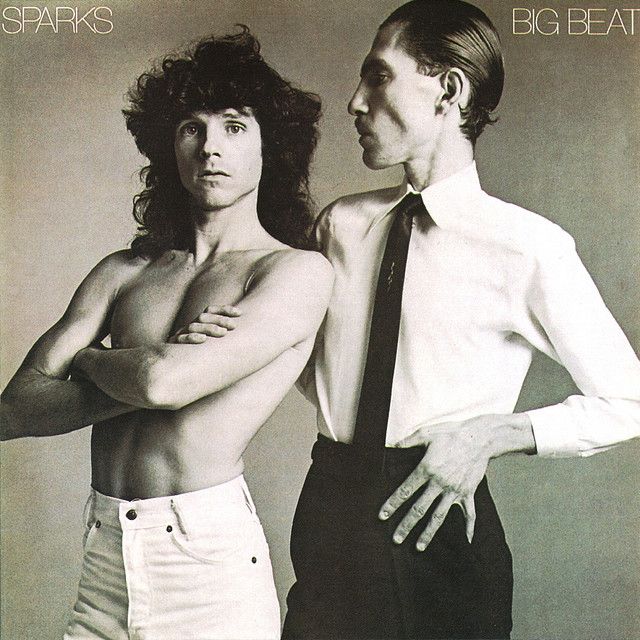 The new songs were rehearsed with David Bowie’s Ziggy Stardust & The Spiders From Mars, guitarist, the legendary Mick Ronson. A 90-minute cassette tape was filled with almost every song on the Big Beat album. Ron Mael & Russell Mael first met Mick Ronson via Bowie producer Tony Visconti. Ronson could not commit to being a full-time Sparks member, so unfortunately, the collaboration never materialized. Mick Ronson was also to produce the album. He declined when he got an offer join Bob Dylan’s tour band.

“…We still have the cassettes of the really rough demos of Mick Ronson playing a lot of the songs and they sound really great because he plays with a lot of abandon.”

Sparks’ sixth album, Big Beat – their fourth and final album for Island Records, was recorded at Mediasound studio in New York City in August 1976. Mediasound was regarded by many artists as the place to make the best-sounding records in the business. Sparks had yet again produced something delightfully unexpected.

Russell: “The Big Beat album cover was shot in 15 minutes by Richard Avedon at his New York assembly-line style photo studio, in by 9, out by 5.”

In 1967, American photographer Richard Avedon shot iconic pop art portraits of the Beatles. The Maels had always wanted to work with the renowned photographer and they finally got the opportunity for the cover of Big Beat.

An Avedon glamour shot. Were you happy with the results? (You both look dapper!)

Russell: We had always wanted to work with the renowned photographer Avedon and finally got the opportunity. Our only disappointment however was that the process was more like a factory where you are shot for 20 minutes, are handed your proof sheets, and sent merrily on your way. Photographically, we were very happy with the results. 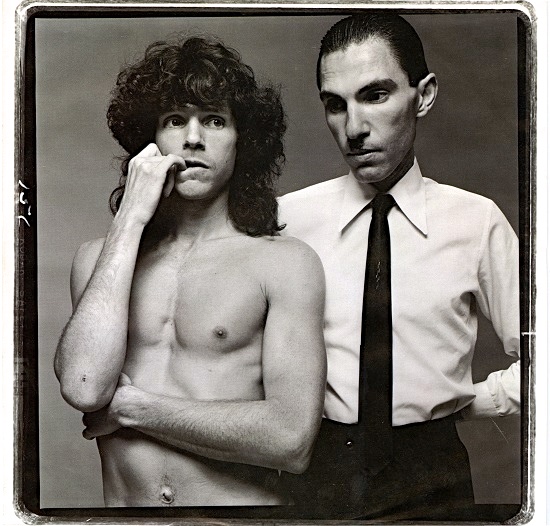 The Songs of Big Beat

The album’s lyrics were clever, and some were politically incorrect – but in the nicest way possible! Big Beat starts with ‘Big Boy’ – the only single release – with Hilly Michaels’ enormous drum sound. We can picture the burger restaurant mascot stomping all over the city. ‘I Want to Be Like Everybody Else’ mocked the sameness of everything popular.

The exciting start of ‘Nothing To Do’, a popular rock chord gradation, comes from ‘Twist and Shout’ (and is later used by David Bowie at the start of ‘Let’s Dance’). There are also some nice Chuck Berry licks.

Russell: “Joey Ramone wanted to do a version of ‘Nothing To Do’ yet never had been able to convince the other Ramones…”

The heavy guitar/bass driven sinister sound of ‘I Bought the Mississippi River’ is reminiscent of ‘Moon Over Kentucky’. The singer (who would later own something even bigger – the BBC) wonders if he should ‘Leave it there, or lug it out west’.

‘Fill-er-Up’ is an unlikely car song for Sparks. Russell’s hyped up vocals certainly drive the tune forward. Ron is not being rude on ‘Everybody’s Stupid’. He surely includes himself in this category, but we know that it is all in jest. ‘Throw Her Away and Get a New One’ shares a theme (a preference of young girls) with ‘Happy Hunting Ground’.

‘Confusion’ was originally called ‘Intrusion’. (The song was to be included in the aforementioned Jacques Tati film.) With slightly different lyrics, the Calypso style tune (‘Intrusion’) had been recorded during the Indiscreet sessions. ‘Intrusion’ appeared on the Island Masters CD reissue, although it was not a Big Beat outtake. On Big Beat, the song evolved to become ‘Confusion’.

‘Screwed Up’ mentions fads of prior decades, yet the current vacuous era (the 1970s) finds us mostly screwed up. ‘White Women’ is undoubtedly Ron’s equal opportunity answer to the Rolling Stones’ ‘Brown Sugar’.

A version of ‘I Like Girls’ was recorded three years earlier. Rupert Holmes re-arranged it, with a horn section for Big Beat.

Russell: “The song was written at the time of the original L.A. band. On returning to America, after our 1972 European tour, we jetted to Bearsville studios in upstate New York (Woodstock) to record the stage favorite ‘I Like Girls’. It was to be a single, but it never saw the light of day until the Rupert Holmes production version on Big Beat.”

The 1973 version of ‘I Like Girls’ was later included on the 1991 Rhino Entertainment compilation Profile: The Ultimate Sparks Collection. 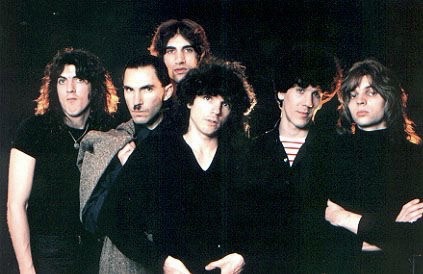 Just before the start of their US tour, Sparks were filmed performing ‘Big Boy’ and ‘Fill-er-Up’ at Magic Mountain amusement park in California for the Sensurround film, Rollercoaster. These two songs comprised the first single release in October 1976, followed by ‘I Like Girls’/’England’ in November.

Holmes produced a lush orchestral arrangement of the Beatles’ ‘I Want To Hold Your Hand’. It was to be a duet with Marianne Faithfull, who backed out. Russell ended up singing it alone. The single was released on 19 March 1976 in the U.K, Japan, Germany and France. The B-side was (an Indiscreet outtake) ‘The Wedding of Jacqueline Kennedy to Russell Mael’. (Mary Hopkin voiced Jacqueline Kennedy). A song called ‘Room For Two’ was written for Marianne Faithfull, which was never recorded. Marianne was dating Sparks’ drummer Hilly Michaels at the time.

For the UK and Scandinavia releases, the B-side was ‘England’ – a sarcastic portrait of the place they left behind, produced by former Sparks/Halfnelson guitarist Earle Mankey. ‘England’ was recorded in LA at the Beach Boys’ studio in Santa Monica where Earle was the engineer at the time. Both songs appeared on Sparks’ Island Masters Indiscreet CD reissue as bonus-tracks.

Island’s 21st Century Edition bonus tracks, along with the above, included ‘Looks Aren’t Everything’ and ‘Tearing The Place Apart’.

A German sampler called In the Swing offers remixes of ‘I Like Girls’ and ‘Big Boy’. Although they are the same performances, the sound on the remixes is fuller. ‘I Like Girls’ benefits from a fuller orchestra.

During ‘Everybody’s Stupid’ Ron emerged from behind his piano – a rare occurrence at that time, to utter the title words in each chorus! Also, on the last tune of the set list, ‘Big Boy’, Ron again smashed his piano bench – which paralleled The Who’s destruction of their instruments on stage. The set included a stunning extended version of ‘Equator’ done in a blues format.

In December 1976, Sparks played two nights (four shows) at The Bottom Line in NYC. The 21st December soundboard performance was recorded, which became a popular bootleg.

“During The Bottom Line shows Ron put the piano bench to his chest and slid across the front table knocking over record executives’ food and drink! Nice touch.” – Sal Maida 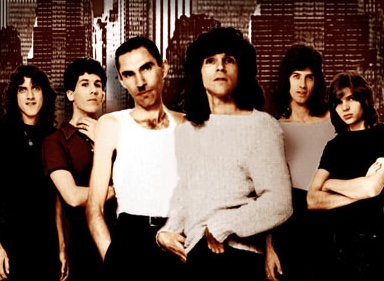 Big Beat was a highlight of the shows in Islington. The earth shook during ‘Big Boy’. Russell dedicated ‘Nothing To Do’ to The Ramones, who almost covered the tune at one time, and ‘Confusion’ to the late film director Jacques Tati. Ron warned the audience not to take the lyrics to some of the songs seriously, especially ‘White Women’ and ‘Everybody’s Stupid’. ‘Tearing The Place Apart’ was the encore. At last, Russell flubbed the lyrics, but with utter dedication, he stopped and started the song over. Ron made a legitimate defense for Russell: ‘During these obscure songs, there are some obscure chord progressions and obscure structure. We apologize for basking in obscurity’.

Sparks’ next album, their seventh, was ironically titled Introducing…

© Madeline Bocaro 2016. No part of this text may be copied, photocopied, reproduced, translated, re-blogged or reduced to any electronic medium or machine-readable form, in whole or in part, without prior written consent. Any other reproduction in any form without permission is prohibited. All text written by Madeline Bocaro on this site is protected by United States copyright law and may not be reproduced, distributed, transmitted, displayed, published or broadcast without prior written permission.