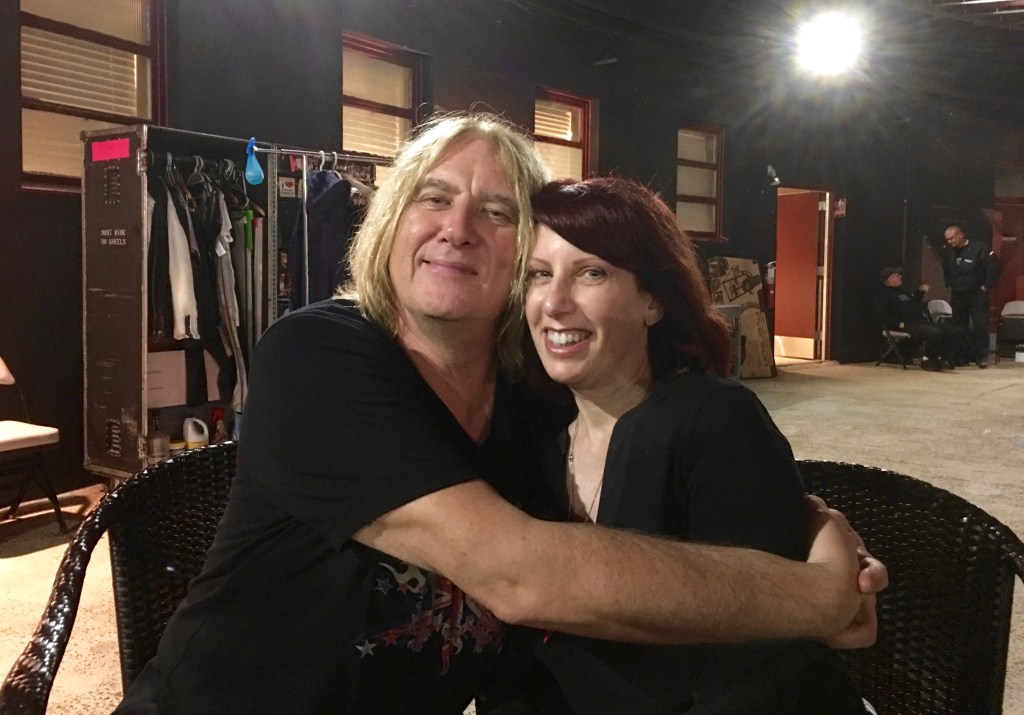 At the end of every Def Leppard concert, Joe Elliott tells the cheering crowd, “Don’t you ever forget us, and we’ll never forget you!” These words come from deep within Joe’s heart. They were the fade-out lyrics of his favorite band, Mott The Hoople’s farewell single, ‘Saturday Gigs’. This final song chronicles the band’s history from the 1969 Roundhouse gigs to their week-long 1974 Broadway engagement in NYC (with Queen as the opening act) and their fizzled out European tour that same year.

Hailing from Hereford/Worcester, Mott The Hoople had a unique solidarity with their fans. In 1972 when the discouraged band was breaking up, Mott’s career was resuscitated by a huge fan – David Bowie, who gave them their anthemic hit single ‘All The Young Dudes’.  Bowie also produced their All The Young Dudes album. Joe Elliott was amongst a resolute crowd of young Mott The Hoople fan club members which included Mick Jones of the Clash, Morrissey and future Pakistani Prime Minister Benazir Bhutto.

In the early 1970s, Mott The Hoople were all flash and crash. When they crashed one last time, singer Ian Hunter went solo in 1975. Ian partnered with his buddy Mick Ronson (guitarist of Bowie’s band the Spiders From Mars) who had very briefly been a member of Mott, at the end.

Thirty five years after their breakup, Mott The Hoople reunited for a triumphant week of gigs at Hammersmith Odeon in October 2009.  Joe Elliott joined in on the encores. Joe’s side  band, The Down N’ Outz (performing Mott songs and Ian Hunter solo material) was the opening act. For the momentous occasion, Joe gifted Ian a Maltese Cross guitar, replicating his iconic Mott axe.  Ian claims that it sounds much better than the old one!

When did you first hear Mott The Hoople on record and where was the first time you saw them live?

The first time I heard Mott The Hoople on record was an Island compilation album called El Pea in 1971. Twenty tracks for £1.99 – a bargain! The first time I ever heard them was on Radio Luxembourg when ‘Downtown’ was Record Of The Week, which meant it got played every hour after 7pm for a week! Great exposure, but sadly no one bought it. The first time I saw them live was in 2009 the first of the two warm up (reunion) shows in Monmouth, Wales. I missed them the first time around, but made up for it by seeing every reunion show in 2009 and 2013!

When did you meet the band (was it when you climbed up a drainpipe to get backstage)?

No, the drainpipe incident has been exaggerated somewhat! Yes, we (me & my 3 gigging mates) snuck back and timidly knocked on the dressing room door, to be greeted by Earl Slick, but as that name may hint at, it was 1977 & the Overnight Angels tour. So actually I met them all individually over the years. I met Ian Hunter in New York for the first time in 1980, Overend at a party in 1983 & hung out a lot with him in his junk shop in Acton. We played postal chess for a while too!  He and Buffin came to see Def Leppard at Wembley in 1988. Verden Allen and I met at the MTH convention in Dudley (along with Luther Grosvenor – Ariel Bender) in 1999 & Ralpher I’d met here and there throughout his career. All good people!

What intrigued you about Ian Hunter as a songwriter and front man?

I wouldn’t know what you’d have called it when I was eleven years old, but now I would say it was in distinctive vocal delivery, “better than Dylan” lyrics and the fact he didn’t come across as someone unaccessible. All three still ring true to me.

Are you as big a fan of Bob Dylan as Ian Hunter is?

See above! I’m in the “other people do his songs better” camp.

Mott The Hoople’s wild, riotous gigs were amazing. Why did they have such disappointing album sales?

Ah, the $64,000 question! Possibly because if everyone who saw them live bought an album, it still wasn’t enough to chart back then. You needed the massive push of a hit which they didn’t have until “Dudes”.

Where did the band initially fit into the music scene in England, and how did that change after Bowie’s (and Mick Ronson’s) involvement?

They were musically all over the place up to Brain Capers, which was much of the charm. After that I think the dynamic changed when Bowie suggested Ian go up front and center which apparently didn’t go down too well with other band members, especially Ralpher who was the first to leave.

Did you appreciate Ariel Bender as much as Mick Ralphs (originally) on guitar?

Not at the time as I only ever “heard” him (on the live album) if I’d seen him like my mates had done I might have had a different opinion. On The Hoople, there’s not much to judge him on, as it’s such a keyboard heavy album, but he does have his moments on ‘Marionette’ and ‘Crash Street Kidds’.

Overend Watts is such a great guy. He’s always been great to me. Back in 1984 he gave me about twelve cassette tapes with all this unreleased stuff on it (a lot of which came out on the 1999 box set, a lot that didn’t) with hand written notes, which was super cool of him. He gave me a money box from his junk shop that obviously I still have, and when I saw him in 2009 at the reunion shows we picked up from where we left off a few years earlier. People in bands seem pretty good at doing that.

I met Verden for the first time at the MTH convention in 1999. He was playing with his own band that night so the opportunity to converse was limited but he’s very friendly. My favourite Hammond player ever!

What have Mott The Hoople taught you?

Don’t split up when it gets difficult! They could and should have been enormous, but it was not to be.

How much have you enjoyed playing the material in your side band Down N’ Outz?

Oh very much so!  We didn’t get much chance to do MTH until album No. 2 but it was worth the wait!

What is your relationship with Mott’s former members now?

Well, to be honest Ian is the only one I’m in regular contact with, but I did see Mick at the Bad Company gig in Dublin about a month ago. Love him, great person and great player.

Here we are with the late, great Overend Watts at the Mott The Hoople reunion gigs 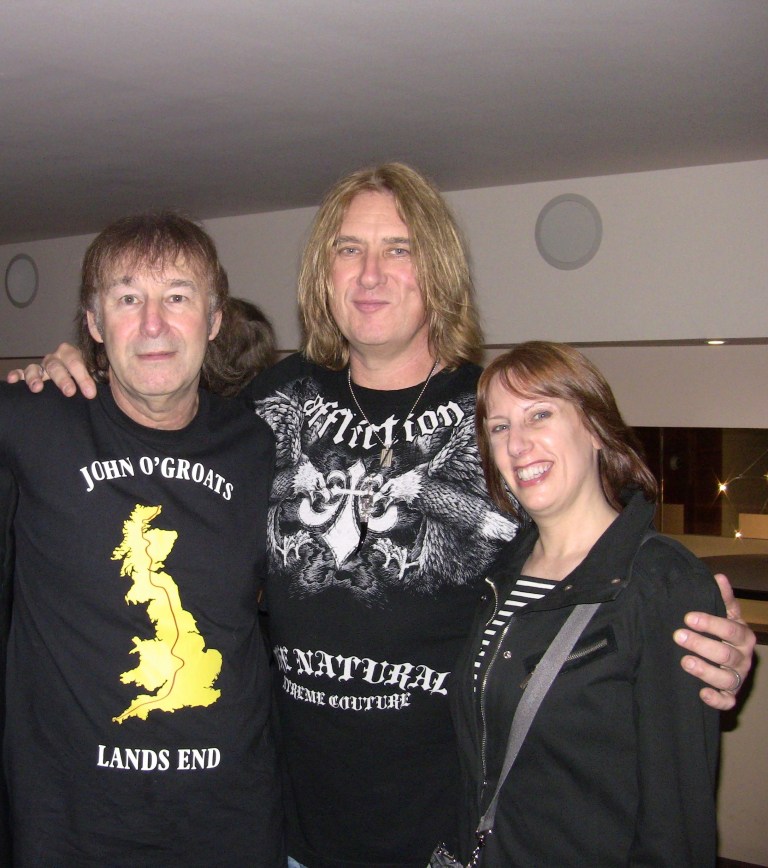 My story about the song ‘Dandy’:

The Dude & the Dandy: Ian’s song for Bowie

MY STORY about the song ‘All the Young Dudes’

‘All the Young Dudes’ – The Story of the Song

One thought on “HOOPLING FURIOUSLY – My interview w/ Def Leppard’s Joe Elliott on his Favorite Band, Mott The Hoople”