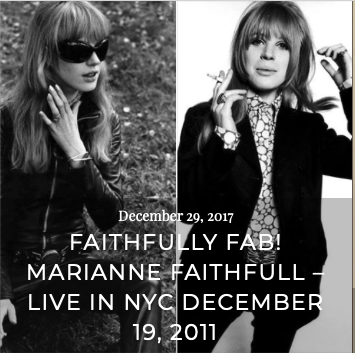 © Madeline Bocaro, 2011. No part of this site may be reproduced in whole or in part in any manner without permission of the copyright owner.

On the second night of her sold-out three-night residence at City Winery, Marianne Faithfull told many interesting stories about her fascinating life, and about each song that she sang. The best one was, “Something happened last night, and I woke up a star!” Marianne is still in disbelief of her celebrity. She is both pleased and embarrassed to be this ‘pop creature’ as stated in her autobiography.
How often do we get to see a true legend these days? Most are no longer with us, or rarely perform. Despite the odds, Marianne Faithfull, It Girl is STILL IT! She is our Billie Holiday, and she has survived her ultra hip and decadent past. Mick Jagger and Keith Richards gave her ‘As Tears Go By’. She gave the Rolling Stones ‘Sister Morphine’. ‘What am I doing in this place? Why does the doctor have no face?’ When parents were warned to keep their daughters away from the Stones in the 1960s, nobody warned the Stones about the perils hidden beneath the sheer beauty of young Marianne! Throughout her career, sweet ballads of the 60s converged with covers of jazz, blues, pop, rock and European classics. She also collaborated with many iconic writers on her own tunes. Her young, ethereal voice was transformed (some would say destroyed) in the mid 70s from drug abuse and throat problems… but really, this was her big break – and it suited her much better!   Marianne’s love of music is deep and passionate. She introduced each song with utmost praise, respectfully naming each songwriter (though sometimes forgetting), and introduced own compositions with pride. Marianne persuasively imbued each song with her own essence, becoming the central character of each one. There were ghosts, young innocent girls, crestfallen women, a flower child, soldiers, drug addicts – and she was all of them. A delicate combination of trash and elegance.  Marianne’s ragged beauty imparts her legend. Her voice has aged like fine wine over decades. Her low register conveys the sorrow of the songs. Lovely cracks, creaks and warbles emanate as she perfectly hits the higher notes with pure emotion. A flawless voice cannot achieve this, nor take us to the places where Marianne takes us. Each song is a story. Every important lyric is clearly sung with a charming, sophisticated British accent. Pure joy and admiration were conveyed in the upbeat ‘Prussian Blue’ as Marianne lyrically described the colours of a Paris evening.  Marianne is timeless, funny, self-mocking and cool. She’s like the kooky old aunt at your family gatherings, making holidays more fun with her humourous tales of debauchery, celebrity and survival. Chatting with the audience and rebelliously lighting endless cigarettes, she explained how she tried to quit smoking with a French hypnotist. “I understand French pretty well, but my subconscious obviously does not.” Faithfull’s amazing band leapt from Daniel Lanois to Duke Ellington to the Stones to Roger Waters with ease. Guitarist Doug Pettibone received several ovations during ‘Broken English’ and ‘Sister Morphine’. The meet and greet afterwards was a special treat. I hope that some of Marianne’s It-ness rubbed of on me during our hug!  You can play all the original songs/videos from the set-list link HERE. http://www.setlist.fm/setlist/marianne-faithfull/2011/city-winery-new-york-ny-73d10e4d.html1. Horses and High Heels  2. Brain Drain  3. Why Did We Have to Part  4. Marathon Kiss  5. The Crane Wife 3  (The Decemberists cover)6. Solitude  (Duke Ellington cover)7. Stations  8. Prussian Blue  9. There Is a Ghost  10.          Sister Morphine  11.          Broken English  12.          The Ballad of Lucy Jordan  (Shel Silverstein cover)13.          As Tears Go By  14.          Incarceration of a Flower Child  15.          Encore:16.          Love Song  17. Strange Weather