“Don’t forget how beautiful the planet can be. And the beauty of the Universe surrounding us. The sun rising. The moon rising. The stars shining. What a great symphony!”

In January 2018, Yoko Ono designed two official Danish postage stamps. Her beautiful designs are simple, consisting of two words and images reflecting positivity and nature – moon and sun –  recurring themes that have always defined her life’s work. On one stamp, the circle of a yellow moon asks us to DREAM, and on the other, an orange sun encourages us to SMILE.  The words “We’ll meet again” and “I love you” surround both PostNord stamps.

Yoko expressed the desire to create postage stamps, and Denmark fulfilled her wish as part of her art exhibition TRANSMISSION at Kunsthal Charlottenborg in Copenhagen (through 18 February 2018). The exhibition featured the artist’s varied and vast means of worldwide communication over the decades, including 900 billboards all over the country.

Yoko Ono’s stamps are available at PostNord online store as a “souvenir sheet” with two stamps. The value of the stamps matches worldwide service from Denmark. www.postnord.dk

Here is a look back at the images Yoko has used in throughout her life, and in the design of the PostNord stamps; Sun, Moon, Dream and Smile…

Imagine one thousand suns in the

sky at the same time.

Let them shine for one hour.

Then, let them gradually melt

Make one tunafish sandwich and eat.

Watch the sun until it becomes square.

Steal a moon on the water with a bucket.

Keep stealing until no moon is seen on

Tape the sound of the moon fading at dawn.

Give it to your mother to listen to when she’s in sorrow.

Take the sound of the moon meeting at dawn.

Give it to your mother to listen to when she’s in sorrow.

“I still remember the beautiful full moon that John and I kept looking at from the bed, after everybody went home. Did anybody think that a man and a woman, a man from Liverpool, and a woman from Tokyo, would do something crazy like that together to change the world? Maybe it was written already on a stone on the moon or something.”

Pray to the new moon, like ancient people use to do. It will make a difference in your days until the next new moon.

What did I enjoy most in school? Daydreaming.

Your dream world and your real world. It’s all you. Be thankful that you have two lives. It’s more interesting than one.

Falling ill in my journey

my dream still runs around the wilderness.

(It’s by Basho, the poet both John and I loved very much.)

‘A dream you dream alone is just a dream,

but a dream you dream together is reality’.

You may say I’m a dreamer, but I’m not the only one
I hope someday you’ll join us / And the world will be as one

John and Yoko’s Film No. 5 (Smile) premiered at the Chicago Film Festival in 1968.  The film is a very long close-up of John’s face shot in super slow motion, with film that is used for shooting footage of rockets. The only action is of John simply smiling. The actual time lapse is three minutes, elongated to 52 minutes. The effect is, as Yoko describes, having a light painting on the wall.

Yoko’s 1971 artwork, A Box of Smile is a small plastic box, which the viewer opens to reveal a mirror.

“The smile is such an important thing and I actually wrote that we had to do this in 1960-something. It’s taken 50 years. In the last page of my Grapefruit book I asked for people to send in pictures of their smiles. It was a big picture. I thought it might take a while. I visualised it. Sometimes you have to wait,” she laughs. “Even 50 years.”

“It was hard for me, too.  After my husband John Lennon passed away, I tried to smile for my health. Look at yourself in the mirror and force a smile. It is just awkward at first. But after you keep trying it every morning, one day you will start giving your smile to your whole body … and then giving your smile to people with emotion.”

More about the stamps:

10 questions with Yoko Ono about postage stamps and letters
Is it the first time you design a postage stamp?
Yes

Why did you want to design postage stamps?
Because I was always interested in stamps and how they looked, and whose face is on them. Usually it’s somebody very famous.

Why are stamps important in your world?
Because I communicate a lot, almost every day, so it’s very close to me.

Why a Danish postage stamp?
Because they were kind to let me do it, I love you!

What does it mean to send letters to other people for you?
Well, sometimes it’s a very nice way of communicating. And not as expensive as doing a film and saying hello in a film.

Do you send letters?
I do still

What message do you want to send with the stamps?
Peace and Love

There is “DREAM, moon” and “SMILE, sun” printed on each postage stamp, what’s the message?
The message I want to give them is energy and power and this is the way I send a warm wish for it.

The sheet around the stamps says “we will meet again” and “I love you”. What does it refer to?
Whenever I think about a person, whoever that is, we are meeting in the air. 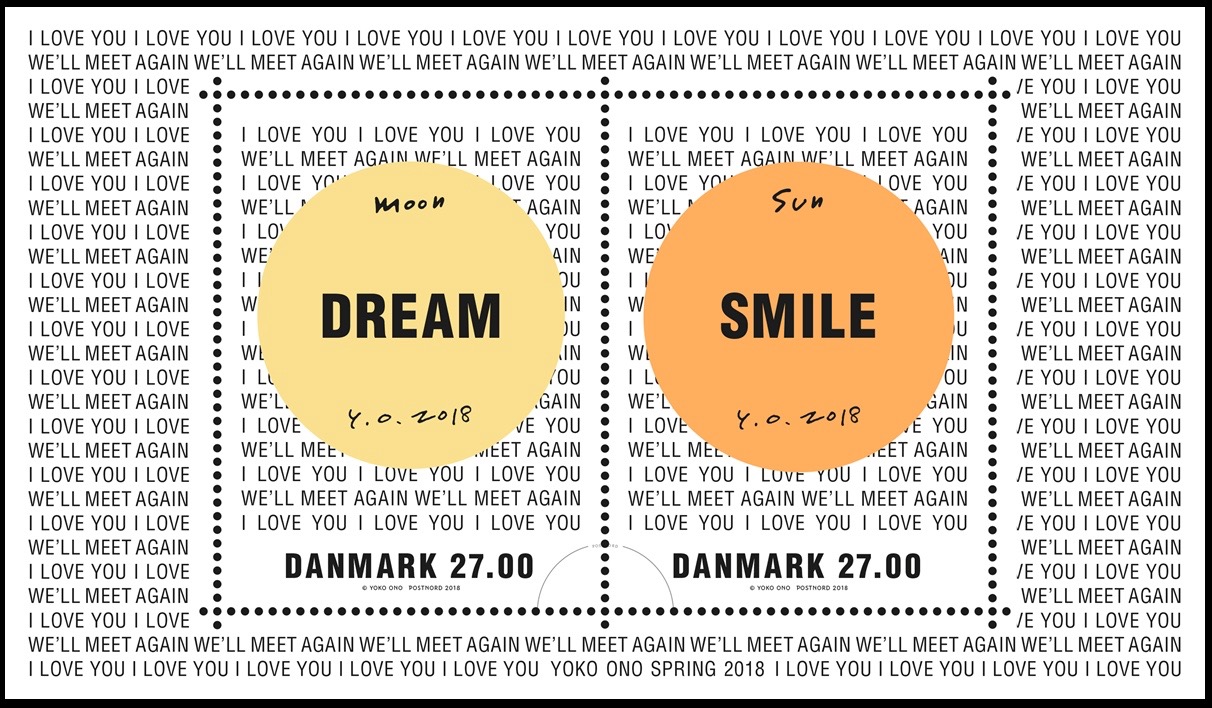 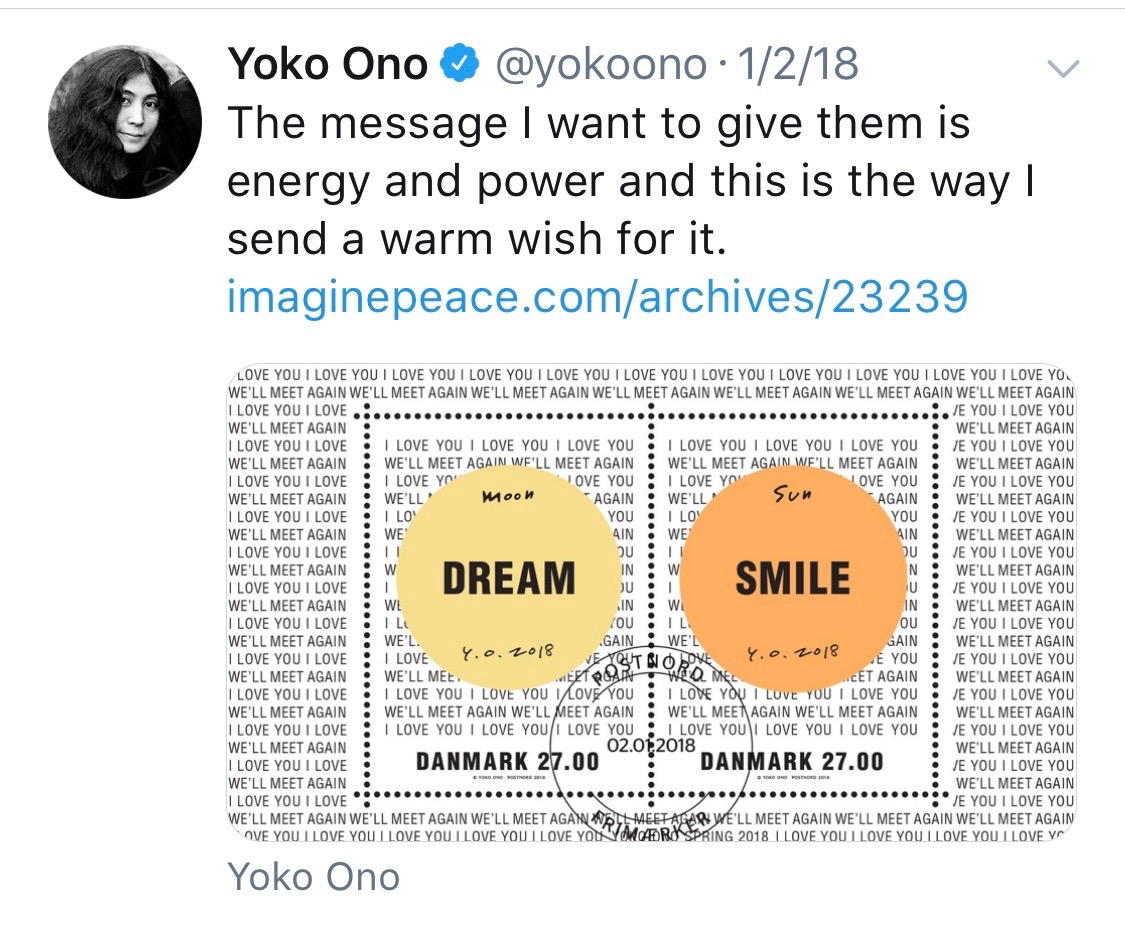