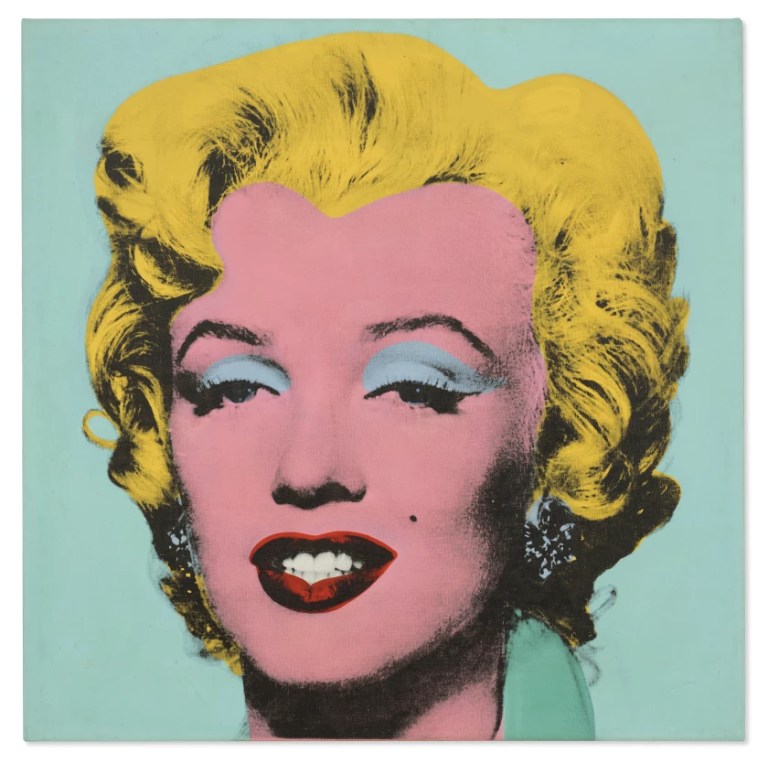 Warhol painted his first portrait of Marilyn in August 1962, immediately after her death. Monroe never knew that her face would become an everlasting Pop Art representation of the 1960s.

The fragile beauty barely survived two years into the 1960s when her star status was fading into a haze of drugs. Warhol branded Marilyn as an iconic superstar with his eternally mass-produced image, confining her within that turbulent decade, frozen in time and in beauty.

Marilyn Monroe embodied two of Andy Warhol’s consistent themes, death and the cult of celebrity. In the following two years, Warhol made thirty silkscreen paintings of Marilyn, using the same cropped publicity photograph from the 1953 movie Niagara. The photographer was Gene Korman and the shot was taken outdoors. Andy painted the background gold before coloring the face and adding black to her features. A set of nine Warhol screen prints (originally priced at $5,000 for the set) was produced in 1967, in an edition of 250. 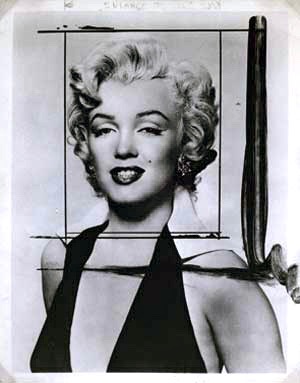 Warhol revisited his Marilyn Series several times over the next twenty years. He made some curious color choices; pumpkin, black-brown, peacock blue and lime green. Examples from the Marilyn series are now in major private and museum collections worldwide, including the founding collection of the Andy Warhol Museum.

Warhol: “In August 62 I started doing silkscreens. I wanted something stronger that gave more of an assembly line effect. With silkscreening you pick a photograph, blow it up, transfer it in glue onto silk, and then roll ink across it so the ink goes through the silk but not through the glue. That way you get the same image, slightly different each time. It was all so simple quick and chancy. I was thrilled with it. When Marilyn Monroe happened to die that month, I got the idea to make screens of her beautiful face – the first Marilyns.”

Utilizing photo-stencils, Warhol used photographic images for his screenprints. The screen is prepared by a photographic process. Then different color inks are printed using a rubber squeegee to press paint onto the canvas through the screen. The color is applied first, prior to the photographic image. It was in 1962 that he first began making multicolored canvases.

Two sets of four small 20” x 16” paintings unofficially known as The Marilyn Flavors were among Warhol’s first silkscreens Warhol’s first silkscreens exhibited at Eleanor Ward’s Stable Gallery in 1962. in 1962. They were priced at $250 each. The eight world-famous Marilyn Flavors; Lemon, Mint, Blue, Orange, Licorice and Violet (named after the flavors of Lifesaver candies) formed the nucleus of Warhol’s first ever solo New York exhibition, organized by Eleanor Ward for the Stable Gallery in November 1962. Gold Marilyn was situated at the entrance. Architect Philip Johnson bought Gold Marilyn and later donated it to New York City’s Museum of Modern Art.

The 1962 Marilyn’s background of phthalo green is complemented by Monroe’s halo of golden hair and the fleshy complexion. The half-tone screen applied in black gives the face definition. The finishing touches – eyes, lips and other facial features – were then added with a brush. Phthalo green Marilyn sold for $4,450,500 at Christie’s New York on November 11, 2010.

Warhol created ten variations in his Marilyn Series. Each had the same composition, but different color variations. There were only 250 portfolios made.

In 1967, the original (authentic) portfolios of 36″ x 36″ Marilyn prints were published by Factory Additions – issued in portfolios of ten screenprints on paper in an edition of 250. Some were signed in pen, some initialed on the back and some dated. There were also 26 Artist Proofs signed and lettered A-Z on the back. The printer was Aetna Silkscreen Products, Inc. by Factory Additions, New York. These are by far the most expensive Marilyn screenprints ($100,000 for a single print at auction, to over $1.5 million for the suite). The turquoise version of Marilyn is the most coveted.

In 1970, prints using the image of Marilyn were made, measuring 33 1/4″ square, stamped on verso with “published by Sunday B. Morning” and “fill in your signature.” Some are inscribed by Warhol with the words, “This is not by me. Andy Warhol.” These are the original unauthorized “Sunday B. Morning” prints. Countless unauthorized prints have been made ever since. Warhol’s original screens still exist, so the Marilyn factory continues production, even after his death. Warhol painted his Gold Marilyn, just after the film star’s  death. He painted the canvas an iridescent gold and silkscreened the star’s face in the center of the large gold background. The style of Gold Marilyn is reminiscent of Byzantine Christian icon paintings. (1962, silk screen ink on polymer paint on canvas, 831/4 x 57”). It is in the permanent collection of the Museum of Modern Art, New York. Warhol’s gold Marilyn was sold to architect Phillip Johnson in 1964 for $2,000. It was then donated to MoMA. If it were to be sold now, it is estimated to bring $60 million.

This is one of Warhol’s most famous works (1962) with fifty images of Marilyn. Half of the images (on the left) are in yellow, pink and blue, and the right half are in black and white, possibly representing her life and death. It is owned by the Tate since 1980.

These multiples on one canvas are on a purple background, all with yellow hair. It is in the collection of The Modern Art Museum of Ft. Worth, Texas.

A massive canvas (1962) which isolates Monroe’s evocative lips and reproduces them 162 times, once again in color and black-and-white, is in the permanent collection of the Hirshhorn Museum. 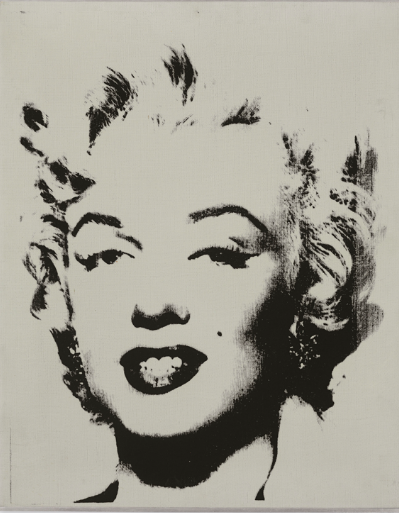 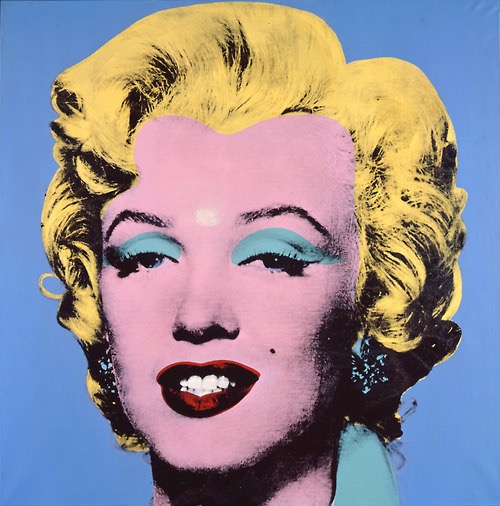 Shot Marilyns is a work of art produced inadvertently in 1964 by an unwelcome visitor to the Factory, Dorothy Podber. Andy painted five different colored Marilyns, all in a 40-inch-square format; cadmium red, orange, light (cerulean) blue, sage blue (a.k.a. phthalo) and turquoise. The five 1964 Marilyn paintings were stored at Warhol’s studio on East 47th Street in Manhattan.

These five paintings became legendary, not only due to their stunning beauty, but because of a bullet…

When Warhol was completing his new series of ‘Marilyn’ canvases, performance artist Dorothy Podber (1932-2008) asked Andy if she could shoot some of his paintings at his 47th Street studio. Thinking she meant taking a photo, he consented. Podber then pulled out a revolver from her handbag and shot through four Marilyn silkscreens stacked against a wall. The perfect shot made holes just above and between Marilyn’s eyes, thus completing Podber’s latest performance piece. Warhol was shocked. These became known as The Shot Marilyns (sans the fifth turquoise Marilyn which was elsewhere in the studio).

The unintentionally themed work consists of four Marilyn canvases, each one a square measuring 40″ x 40″ each shot through the forehead by a single bullet. The fifth painting with the turquoise background was not in the stack at the time of the shooting.

All prints of ‘The Shot Marilyns’ have a small discoloration on the forehead, where the repaired bullet-holes were in the originals. The Warhol Foundation deems it important NOT to re-touch the spots on the ensuing prints, because of the history surrounding ‘The Shot Marilyn’ paintings. Only two of the paintings (blue and red) show evidence of damage. The 1964 paintings have come to be known as; Shot Red Marilyn, Shot Light Blue Marilyn, Shot  Marilyn, and Shot Sage Blue Marilyn.

On May 9, 2022, Shot Sage Blue Marilyn was auctioned by Christies for $195 million. This makes it the highest priced 20th century work of art ever to sell at auction, topping Basquiat’s 1982 skull painting which had set the record in 2017 at $110.5 million. (The Basquiat was purchased by Japanese billionaire Yusaku Maezawa).

Shot Sage Blue Marilyn has been exhibited at the Guggenheim in New York, the Centre Georges Pompidou in Paris and at Tate Modern in London. It was in the collection of Thomas and Doris Amann in Zurich, whose foundation supports children’s charities. The proceeds from the sale will be donated to charity. (The siblings Thomas and Doris Ammann in 1977 founded Thomas Ammann Fine Art, a Zurich gallery that specialized in Impressionist, modern, post-war and contemporary artists).

I saw this painting exhibited at the Brandt Foundation exhibit in Greenwich, CT in June 2013!

After Warhol’s death, Los Angeles–based collector Max Palevsky sold Shot Red Marilyn in 1989 (with a repaired bullet hole over the left eyebrow) at auction for $4 million – the highest price ever paid for a Warhol painting at the time, to Japanese collector Masao Wanibuchi. In 1995, during an art market recession, it was sold at a loss for $3.6 million to Philip Niarchos.

Pop art collector Leon Kraushar was the original owner of Orange Marilyn. In May 1998, the painting was auctioned by Sotheby’s and sold to S.I. Newhouse for $17,327,500 — nearly three times its high estimate of $6 million.

Warhol’s paintings of JFK’s wife (Jacqueline Kennedy Onassis) became another iconic Warhol masterpiece. Elizabeth Taylor was another of Andy’s muses, amongst hundreds of other silkscreened celebrity portraits. But none of them have become as popular as Warhol’s Marilyns.

Turquoise Marilyn (1964) was the only painting unscathed by the shooting. In May 2007 the painting, one of Warhol’s several portraits of Marilyn Monroe, was sold by Chicago-based collector Stefa Edlis to art collector Stephen A. Cohen in a private sale via Larry Gagosian for a price believed to be $80 million.

Warhol’s Marilyns pop up at auction now and then, but meanwhile…

You can color your own! 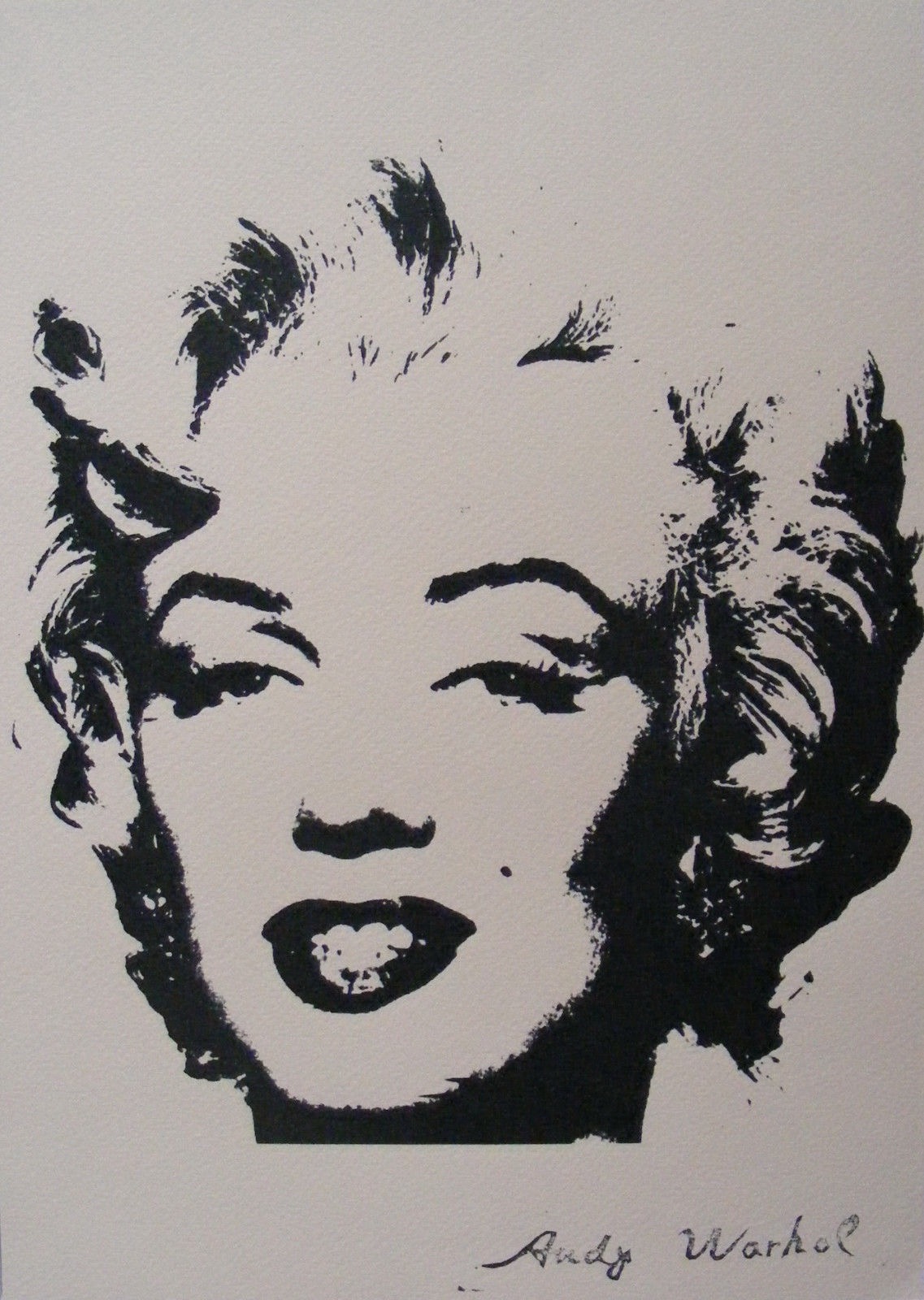 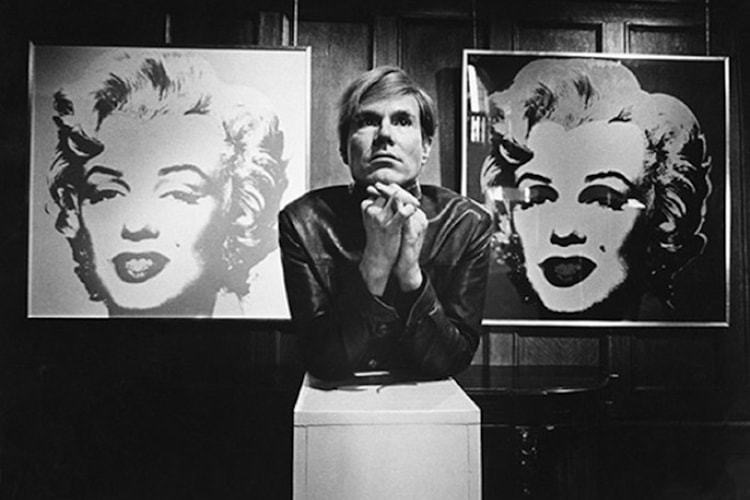 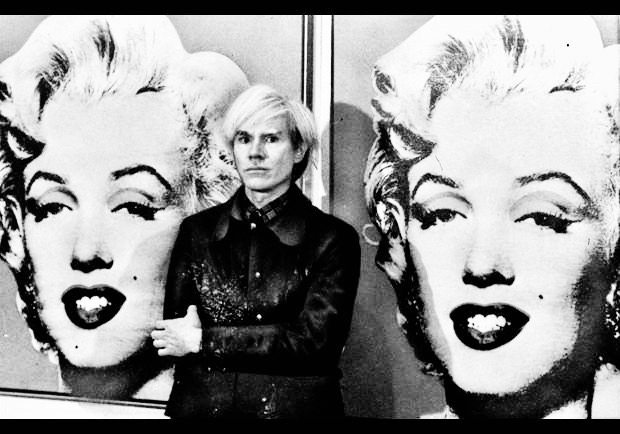