Most of Yoko Ono’s work is based upon healing of the soul. Many things in life are broken, including objects and people. Mend Piece is rooted in the Japanese practice of Kintsugi (金継ぎ, きんつぎ, “golden joinery”), mending broken china or ceramic ware with powdered gold, enhancing their beauty. The wabi-sabi aspect of a transient, impermanent mended object is to retain its visual history – including the breakage and the repair.

Bandage any part of your body.

If people ask about it, make a story

If people do not ask about it, draw

their attention to it and tell.

If people forget about it, remind

them of it and keep telling.

Do not talk about anything else.

A version of Mend Piece was presented to John Lennon in 1968. 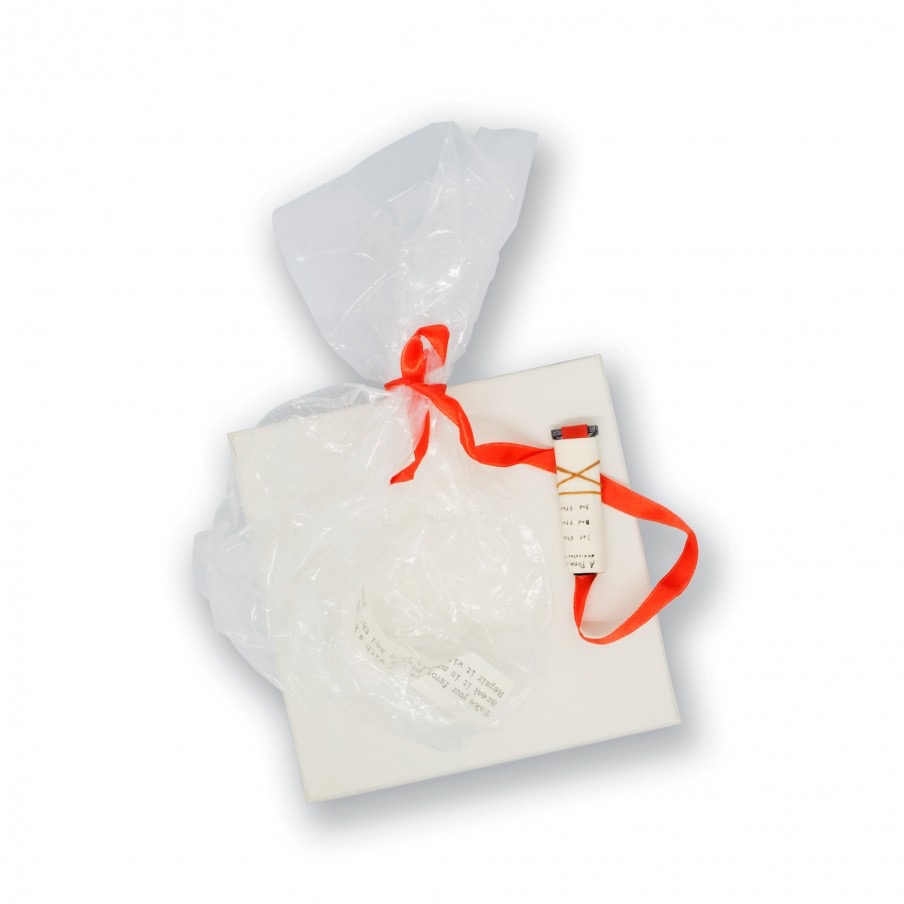 “MEND PIECE is a wish piece. It’s a broken cup that sits on a stand with glue, thread and thimble. You are supposed to mend the cup. I once did this piece on a TV show. Soon after that John and I were traveling cross-country. A boy came up to us and thanked me for Mend Piece. He said his family had been on the verge of splitting up. But for some reason they happened to watch the TV show together – the one on which I showed Mend Piece – and they decided to mend their relationship and stay together. They then broke a cup and mended it together as a symbol of their mended relationship. You might think you’re just mending a cup, but you’re actually mending something within you. The process of mending is the experience. It’s interesting that, in the gallery show, the women immediately went to Mend Piece, and the men went to the chess piece – the result of society encouraging men to be competitive and women to be compassionate, maybe.”

Mend Piece was performed over five days in 1972, when John and Yoko were guest hosts on the Mike Douglas television show (USA). They repaired a tea cup by reassembling one piece each day.

The instruction on the wall of New York city’s Andrea Rosen gallery above a long table of broken white ceramics (@ Yoko Ono Riverbed exhibit in 2015) read, “Mend with wisdom mend with love. It will mend the earth at the same time.”

In Ono’s Mend Piece, up to 10 people sit at a table. Using twine and tape, they glue and tie porcelain shards together into a semblance of a teacup. Everything is white, from the walls to the table and chairs to the tape holders and cup and saucer shards.

“What I was doing in my work was not just showing how great I am as an artist or something. I was showing how you can deal with life. If you think about it conceptually, it can happen later.”

is now showing at Rennie Museum in Vancouver through April 18, 2018.

A companion to Mend Piece is Yoko’s collaboration with Illy coffee, Mended Cups – a set of espresso cups and saucers with gold lines representing mended cracks from catastrophic worldwide events. Inscribed in Yoko’s hand on each saucer is the date and place of the tragic event, with the words “…mended in 2015.” The seventh cup in the collection, Unbroken Cup, is untouched with no cracked or mended lines, reflecting peace and hope with Yoko’s hand-written words on the saucer, “This cup will never be broken as it will be under your protection”. 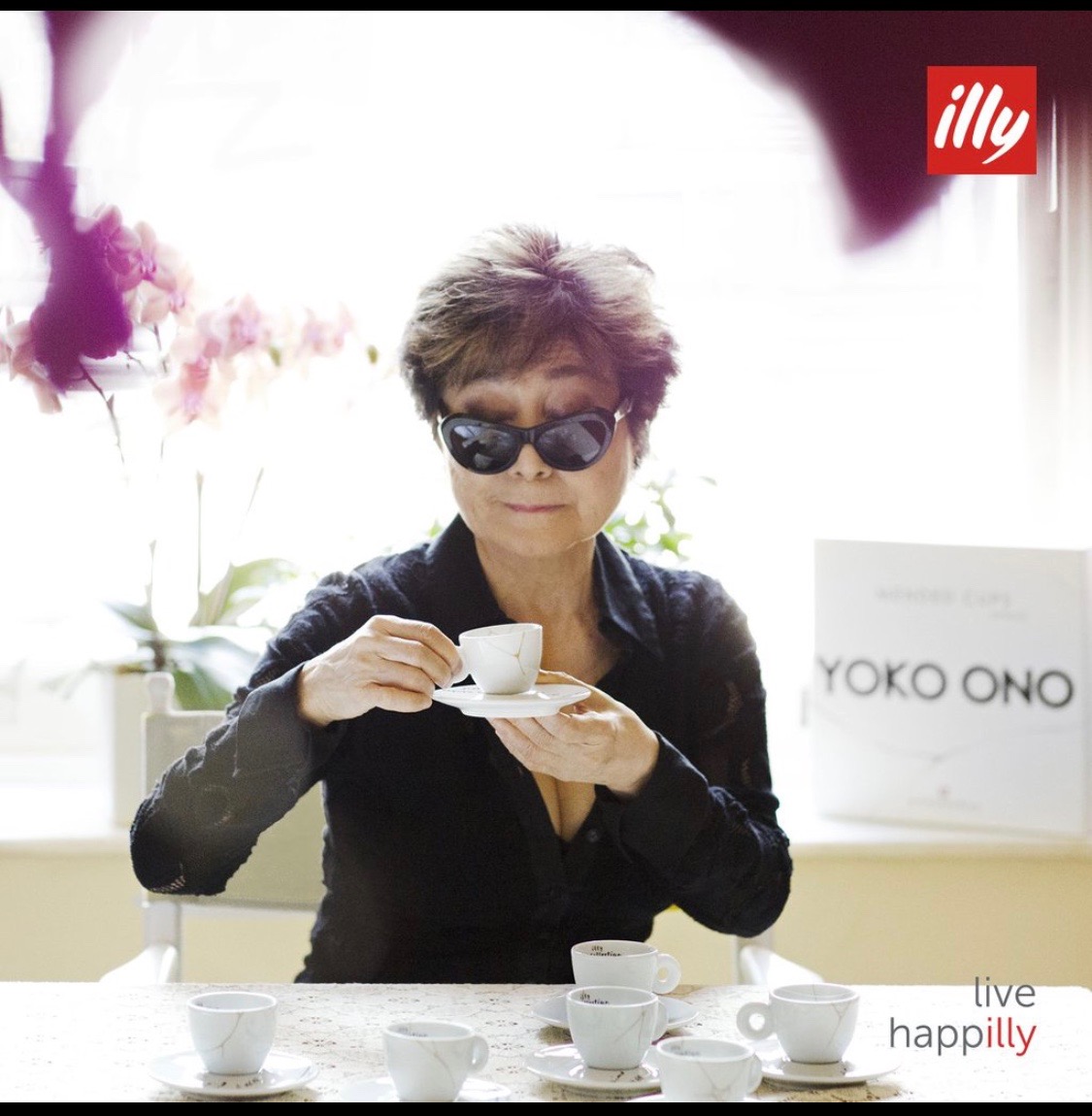 Mend piece is actually a continuation of Promise from Yoko’s book Grapefruit (1964), a book of instructions.

“This was first performed in Jeanette Cochrane Theatre in London, 1966. Yoko Ono, as the last piece of the night, broke a vase on the stage and asked people to pick up the pieces and take them home, promising that they would all meet again in ten years time with the pieces and put the vase together again.”

Promise was a staple of Yoko’s appearances, performed many times over the years. There is no telling how many pieces of vases are in private collections, as there was no exact date given in ‘ten years time’.

In 2009 and in subsequent years, Yoko revisited her work Promise Piece.

She created a huge acrylic jigsaw puzzle picturing the sky at the United Nations on April 2nd (World Autism Awareness Day). PROMISE symbolizes the coming together of society around children with autism, and the unfinished work of the world in finding a cause and cure for autism.

Yoko’s beautiful PROMISE mural was comprised of 67 jigsaw puzzle pieces of sky. It was 5 x 7 feet tall and weighed approximately 220 pounds. A light installation behind the piece illuminated the sky. Individual pieces of sky were auctioned for the Autism Speaks charity. Promise Piece II was also auctioned in Japan for Autism Speaks. 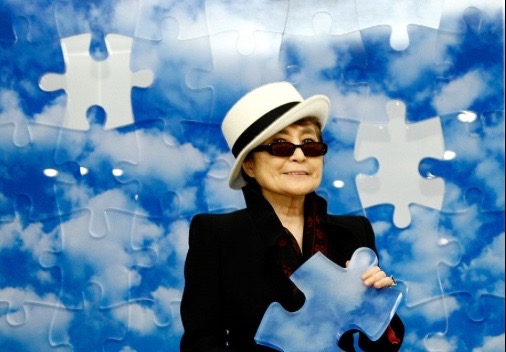 (Promise Piece II was also auctioned in Japan for Autism Speaks in April 2, 2009): “There are still holes in the sky, expressing the mysteries of autism. And the holes are needed to be filled. With our belief and trust in working together, I know that it will be filled in no time.” – y.o. 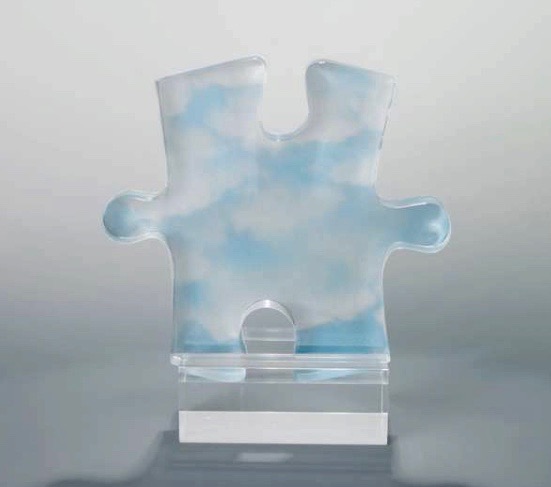 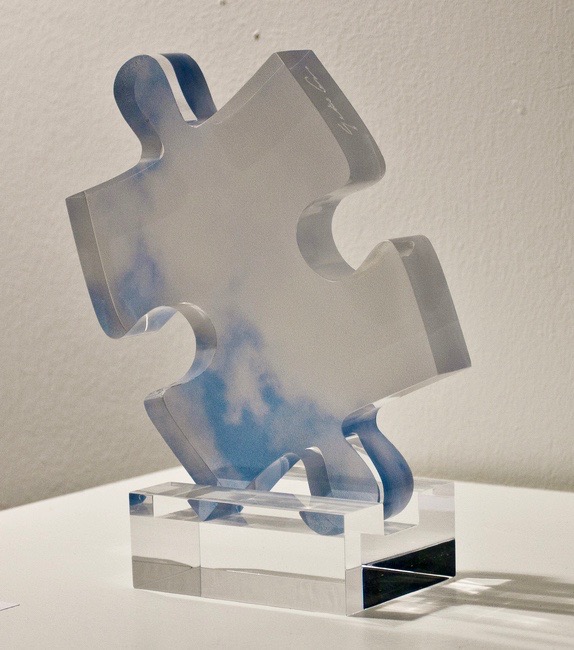 The SMS Portfolios, published through Letter Edged in Black Press involved important artists of the 20th century distributing their work directly to the audience. Six portfolios containing 11 to 13 objects were produced in editions of 2000.
This SMS edition of Mend Piece, by Yoko Ono contains materials and instructions for repairing a broken cup. “This glue and this poem in three stanzas is dedicated to John.” 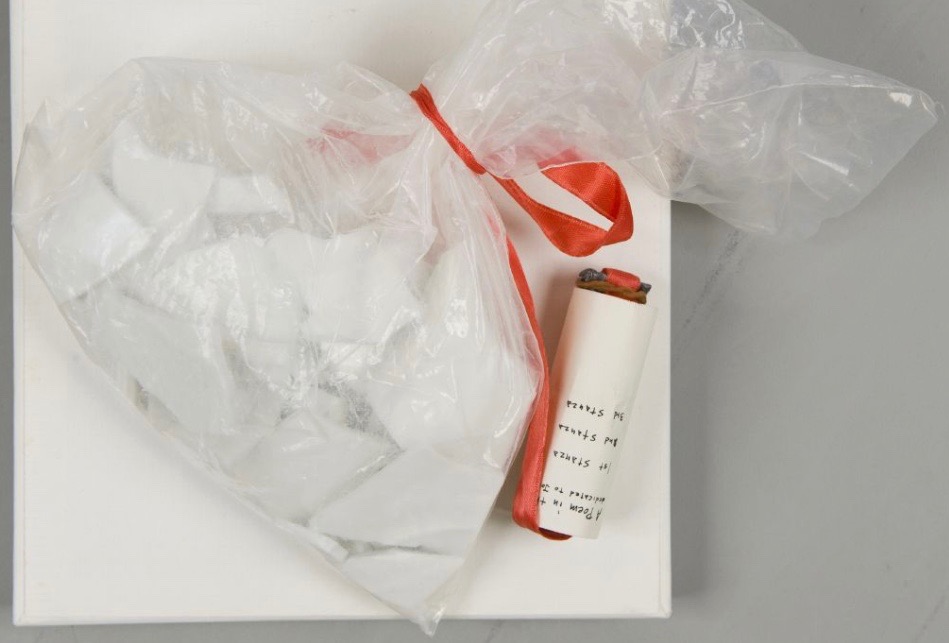 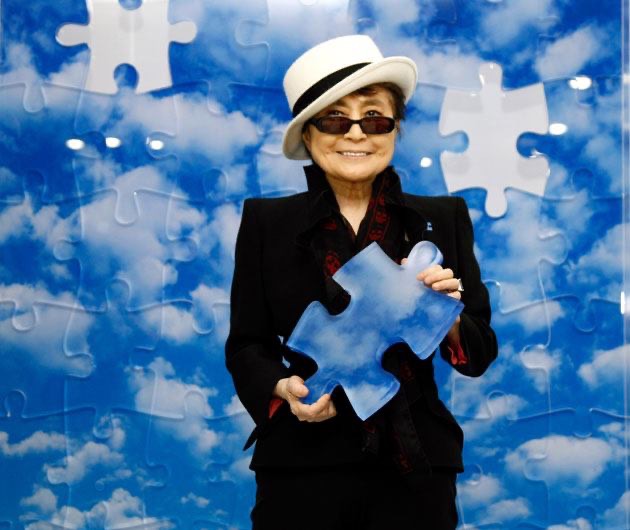 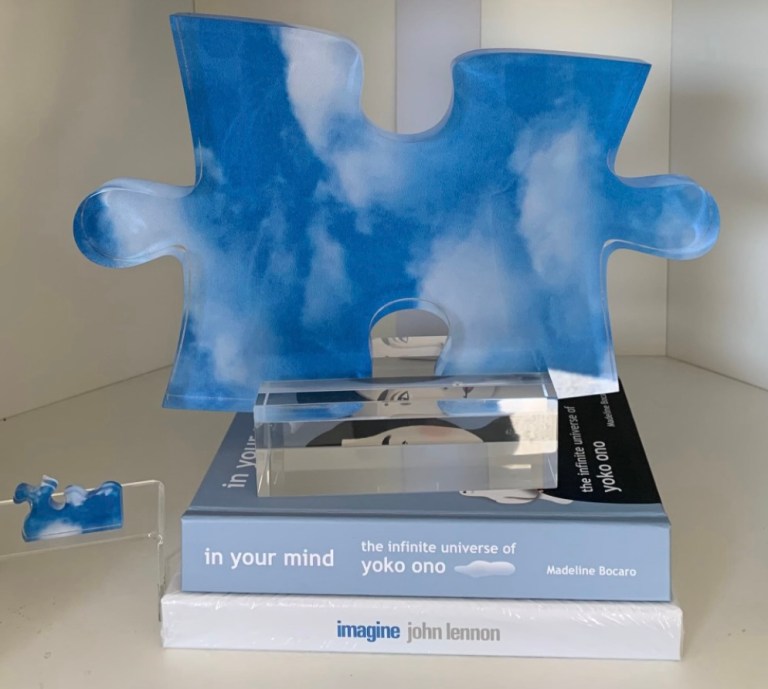