Today, on the anniversary of the single release  of ‘Life On Mars?’ (June 22, 1973) let’s celebrate the fabulous Bowie song and its stunning iconic video!

Not since the Tin Man in The Wizard of Oz did any man wear blue eye shadow so effectively. Photographer Karl Stoecker’s striking image of Kari-Ann Mueller (designer Ossie Clark’s 1960’s favorite supermodel who later became Mick Jagger’s sister-in-law) on Roxy Music’s debut album cover could have been Bowie’s reference for the ‘Life on Mars?’ video. The stark white background of both iconic images certainly makes the colors pop! Bowie’s makeup artist Pierre La Roche did something similar with the extreme blue eyeshadow on Tim Curry as Frank N’ Furter in The Rocky Horror Show (which premiered in London’s West End on same week as the single’s release, later to become a cult film. 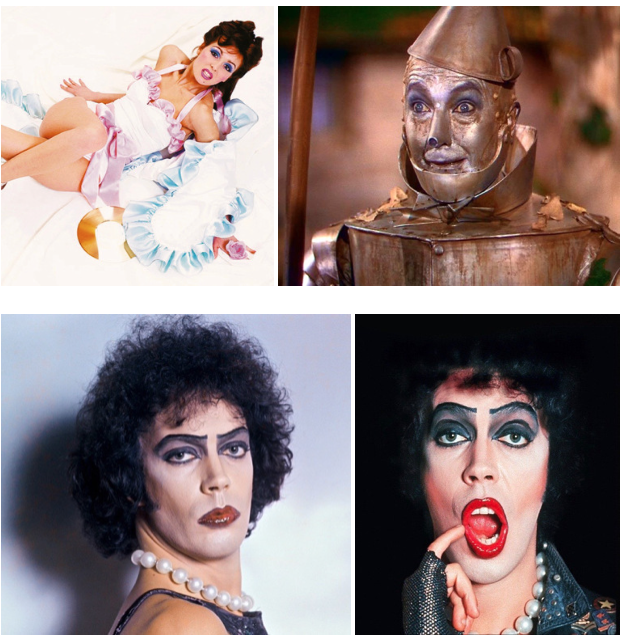 David Bowie’s song ‘Life on Mars?’ appeared in 1971 on his album Hunky Dory. It was later released as a single on 22 June 1973, upon the major success of The Rise and Fall of Ziggy Stardust and the Spiders From Mars. To accompany Bowie’s single’s release Mick Rock filmed and directed a promotional video on May 12. It was produced for less than $350, shot in one day, and edited in two days in a warehouse off Westbourne/Ladbroke Grove.

“I wanted to do something that looked a little like a painting.”– Mick Rock 1998

The cryptic lyrics and bleak story of ‘Life On Mars?’ conjure mundane images to which young people can strongly relate. An extremely jaded young girl searches for meaning and excitement in the cinema, only to find the bleakness of reality portrayed on the screen. The hopelessness is not limited to one place (“Rule Brittania [sic] is out of bounds”, “It’s on America’s tortured brow”, “From Ibiza to the Norfolk Broads”). Civilization has made many of us feel alienated and isolated, looking to the skies for an escape to a higher plane in life – ‘Somewhere over the rainbow’.

We recall the children in Bowie’s later single ‘Starman’ (April 1972), a last minute addition to The Rise and Fall of Ziggy Stardust and the Spiders from Mars. Although ‘Life on Mars?’ preceded the hopeful young kids in ‘Starman’, the youthful protagonist is older and more jaded. In any case, we knew that David was singing about us. The video portrays none of this desolation – only our glamourous singer in extreme close-up.

Freddie’s design/measurement notebook indicates Bowie’s waist at 26.5 inches. The fabric is a synthetic textile found in Southall, West London. The long jacket is lightweight and streamlined with wide lapels. This shape was a popular silhouette for women’s trouser suits from Yves St. Laurent at that time. The trousers have large cuffs at the front only. 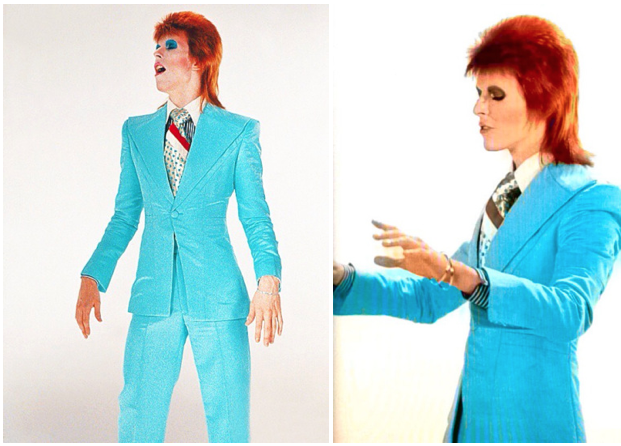 At the David Bowie Is exhibition, a vest made from the same ice blue material was displayed with a (newly added?) sequined lightning bolt. The vest is not worn by Bowie in the video.

For UK Vogue in May, 2003, Kate Moss was photographed by Nick Knight wearing some of Bowie’s Ziggy costumes. The ‘Life on Mars?’ suit (by Burretti) included the vest.

(A documentary film about Freddie, Starman – The Man Who Sewed the World was released in 2015. Freddie died while living in Paris in May 2001)

(Bowie’s brown suit on the back cover of Pin Ups – from Mick Rock’s saxophone photo shoot -was a similar silhouette with a shorter, double breasted jacket by Derek Morton at Tommy Roberts’ City Lights boutique).

The video portrays Bowie’s face in extreme close-up as the entire landscape of the film, surrounded by a backdrop of pure white.

In the early days, Bowie used makeup tips that he had learned mostly from Lindsay Kemp during his time in Lindsay’s mime troupe, and later in Japan by Kabuki theater onnagata, Tamasaburo Bando. Bowie’s make-up artist from 1973 was Pierre La Roche from The House of Arden.

La Roche was born Jean-Luis du Cerisier in Algiers. Following a lonely childhood, Pierre moved to France, then England, where he became the star make-up artist at Elizabeth Arden in London. Quitting after five years when the company insisted he become more conservative, La Roche freelanced and was soon hired by David Bowie and also Mick and Bianca Jagger while he continued doing make-up for British fashion magazines, celebrities, and movie stars. During the sixties, Pierre was inspired by the Arab women of his homeland who painted their eyes black with khol, a dark ancient eye shadow. La Roche popularized black eye-shadow and originated the glitter look. Later, he moved to America to work with other celebrities and also designed make-up for the “average woman”. 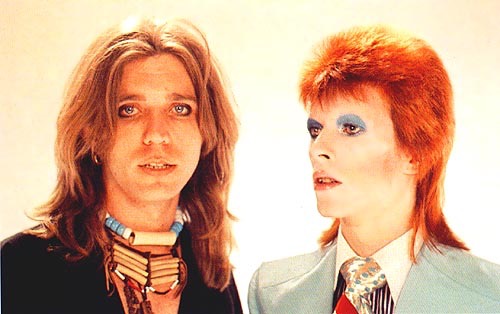 Most famously, La Roche applied Bowie’s iconic lightning bolt makeup for 1973’s Aladdin Sane album cover photo (although the cover’s photographer Duffy claims that he himself painted the lightning flash on with lipstick. Pierre also created the golden astral sphere make-up on Bowie’s forehead. La Roche filled in the circle on Bowie’s face with gold leaf makeup. La Roche made up some of Roxy Music’s album cover girls, and the cast of The Rocky Horror Show. Pierre died in the early 1980s.

The original version of the video cut to scenes of fans reaching out their hands to Bowie at a Ziggy concert. The inferior quality of the video shown in the 70s was due to a transferring error when it was copied. The version found on BOWIE – THE VIDEO COLLECTION (1993) is a re-edit of the original with the audience scenes removed, and Bowie is digitally bleached to emphasize his colorful make-up.

An alternative promotional film of ‘Life on Mars?’ was shown once on Top of The Pops(BBC), made from various clips of the Nationwide David Bowie Special, plus footage of Tony Curtis and Lulu arriving at the Hammersmith Odeon show on July 3, 1973. This film was only broadcast once on July 12, 1973. A 16 mm film by Mick Rock (transferred to video by Mainman in 1995) surfaced, which has additional ‘Life On Mars?’ outtakes, some in black and white.

The film was recut (and exploded into shards) by artist Barney Clay. It was projected onto four walls. Visitors had to lie down on the floor while the nearly two-story-high Bowie face towered above.

“’Life On Mars?’ was the final of four 16mm promo films I produced and directed for Bowie. John I’m Only Dancing, The Jean Genie and Space Oddity were the others. In all cases I waived any fee for their promotional usage. Nobody had any idea at the time that people would one day pay money for such things. Twenty years later these four promo films are featured in a retrospective video package of tracks from Bowie’s RCA years. In truth, if I had solicited compensation, these films would not have been made. Promos were not part of any regular budget and only David and I were enthusiastic. DeFries agreed to spring for the expenses to keep David happy and I got to further my interest in film. The key for me was that, within the confines of tiny budgets, I had total creative control. David was happy to let me make all the shooting and editing decisions. What was important to him was that they got made. As in all aspects of his career, at this point, David exhibited uncannily prescient instincts. It’s important to note two special ingredients, which made ‘Life On Mars?’ such a memorable promo. The dazzling turquoise suit made by longtime Bowie confidant and clothes designer Freddie Burretti (David never wore the suit again), and the exquisite make up rendered by glammeister Pierre La Roche, the man who applied the lightning bolt motif on Aladdin Sane.”

© Madeline Bocaro 2019. No part of the text available through madelinex.com may be copied, photocopied, reproduced, translated, reblogged or reduced to any electronic medium or machine-readable form, in whole or in part, without prior written consent Madeline Bocaro. Any other reproduction in any form without permission is prohibited. All text contained on this site are protected by United States copyright law and may not be reproduced, distributed, transmitted, displayed, published or broadcast without prior written permission. 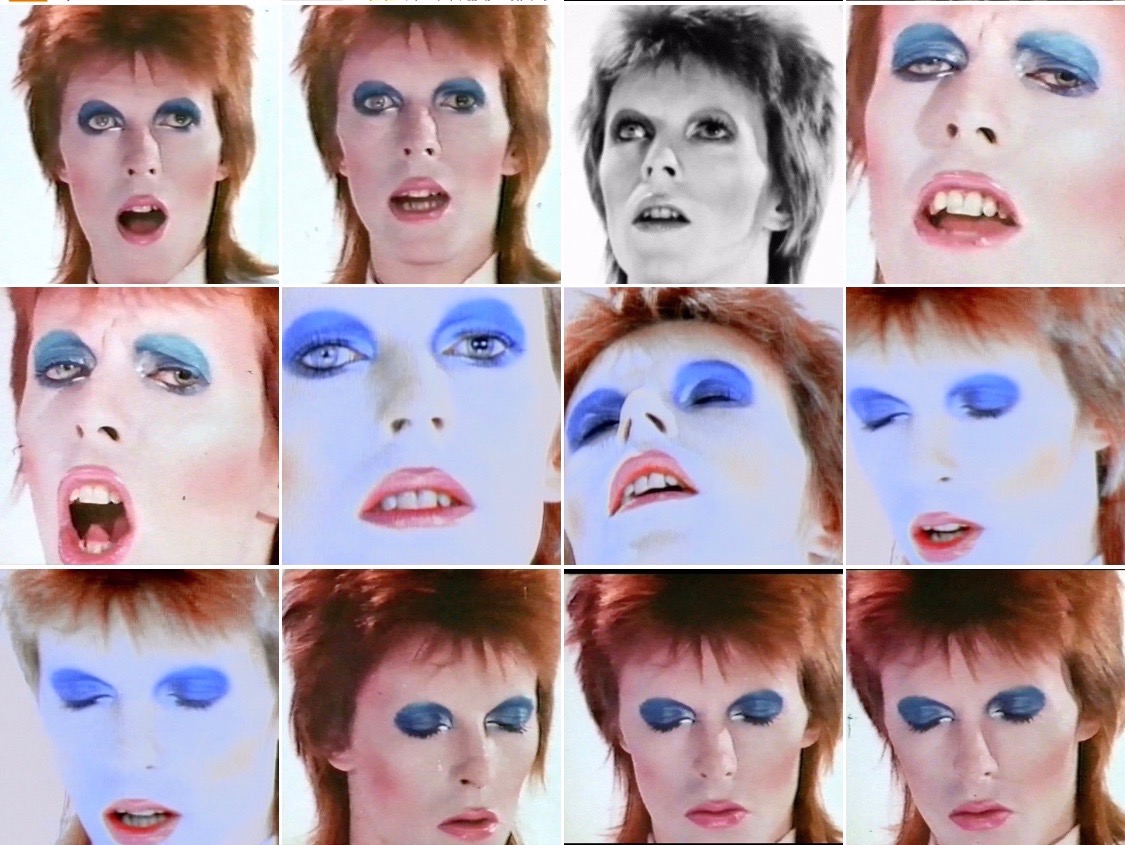 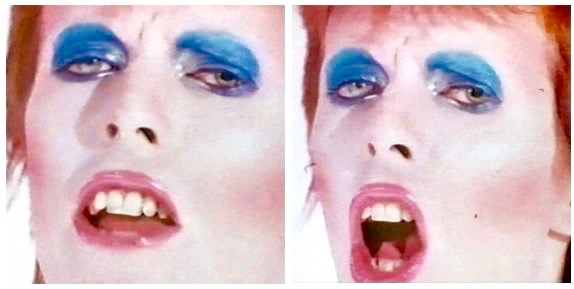 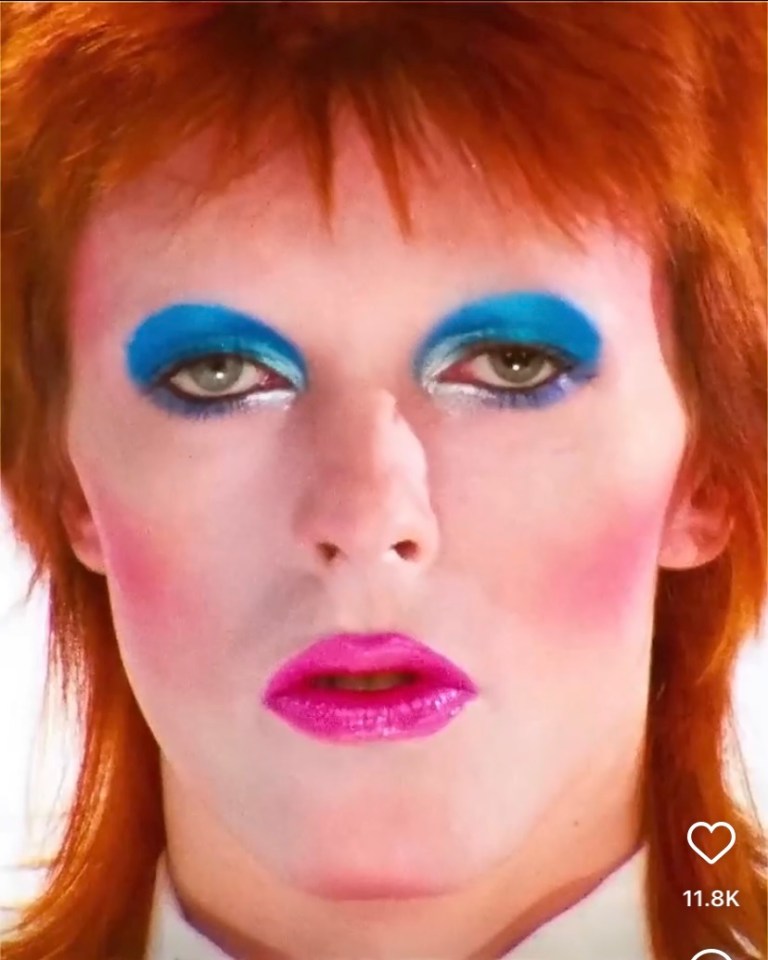