Bowie covers his faves: The Easybeats, The Merseys, Pink Floyd, The Yardbirds, The Who, Them, The Kinks…

The PinUps album cover photo of Bowie with 60s ‘It Girl’, Twiggy (shot by her boyfriend – photographer Justin de Villeneuve)  with makeup by the brilliant Pierre La Roche was planned to be an Italian Vogue magazine cover. Bowie would have been the first man on the cover of Vogue. However, Bowie opted to use the image for his album cover instead. 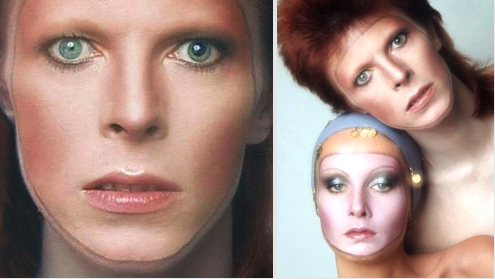 “[Twiggy and I] met Bowie a few times socially, and he mentioned that he wanted to be the first man on the cover of Vogue. I called them to suggest this, with Twiggy, of course, and after a bit of a hoo-ha, they agreed.

Bowie was working on PinUps in Paris, so we flew there to do the shoot. When Twigs and Bowie were together and lit up, I looked through the viewfinder and realised that David was pure white, whereas Twiggy was tanned from a holiday in Bermuda. There was a moment of panic because I knew it would look bizarre; but the makeup artist suggested drawing masks on them, and this worked out even better. I remember distinctly that I’d got it with the first shot. It was too good to be true.

“When I showed Bowie the test Polaroids, he asked if he could use it for the PinUps record sleeve. I said: ‘I don’t think so, since this is for Vogue. How many albums do you think you will sell?’ ‘A million,’ he replied. ‘This is your next album cover!’ I said. When I got back to London and told Vogue, they never spoke to me again.”

**
“Twigs and I flew to Paris because Bowie was in France, at the Château d’Hérouville, the Honky Chateau, recording Pin Ups. Vogue booked the studio, and all of us converged there. We had a huge entourage – I even had a butler at the time, I’m ashamed to say, as did Bowie. …When he took his shirt off I was actually quite taken aback by how pale he was. He was like a sheet. He really was the Thin White Duke.
So the lovely Pierre La Roche worked wonders. I’d always been obsessed by masks, as people do interesting things when they have a mask on. So I asked Pierre to give them both masks, and it was perfect. They both look oddly enigmatic… Thing is, it wasn’t until I looked at Bowie through the lens that I realised he had different coloured eyes. He did have an aura about him, something you could never quite put your finger on. He was always surrounded by lovely-looking girls, wherever you saw him. Girls everywhere. That always made me very intrigued.”
– Justin De Villeneuve
David Bowie: A Life, by Dylan Jones

As this was an album of favorites by David’s idols, the title is a dual reference to the pinups teenagers had hanging in our rooms – posters of our idols plastering our walls – and also the title of artist Richard Hamilton’s 1961 collage titled Pin-up (a mixed-media work of a female nude using plastic). Hamilton was the progenitor of pop-art. He designed The Beatles (white album) cover and was also a hero and inspiration to Roxy Music’s Bryan Ferry. 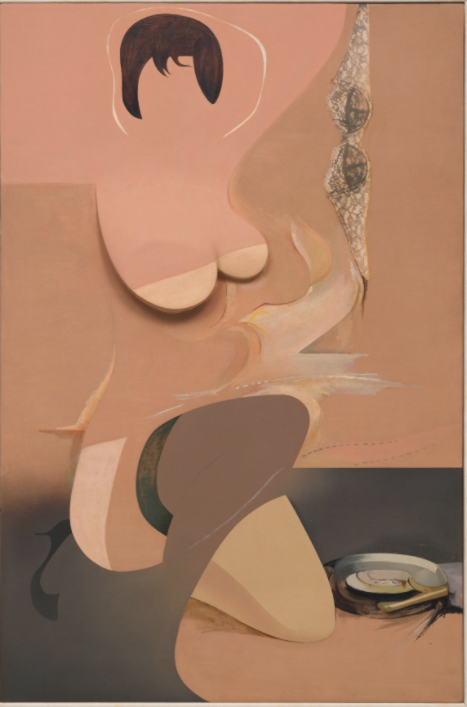 Bowie’s chocolate brown suit on the back cover, with cuffed baggy trousers was purchased from Tommy Roberts’ City Lights boutique. 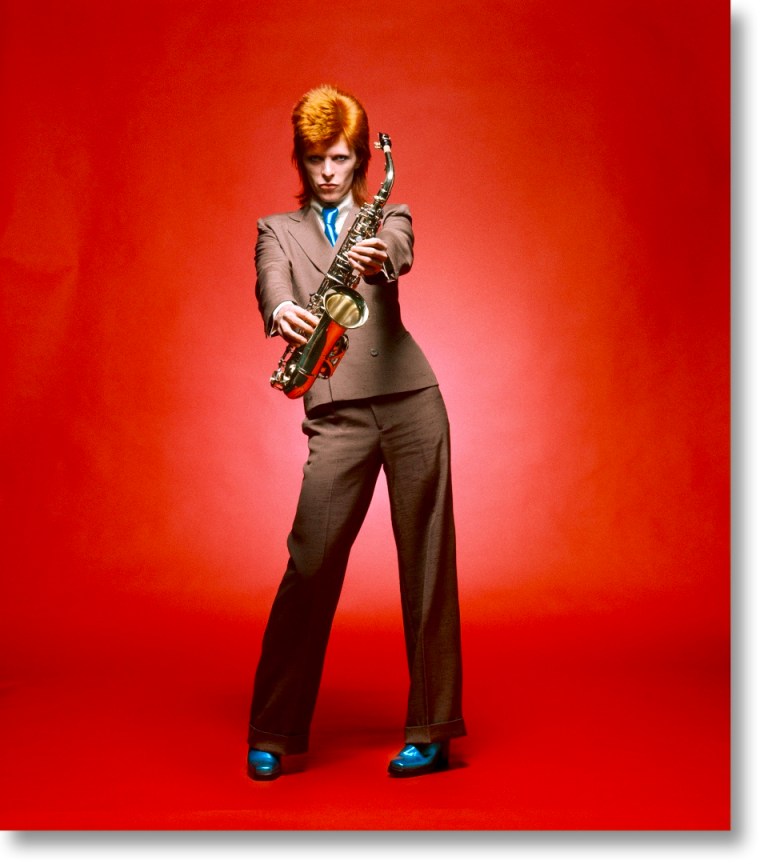 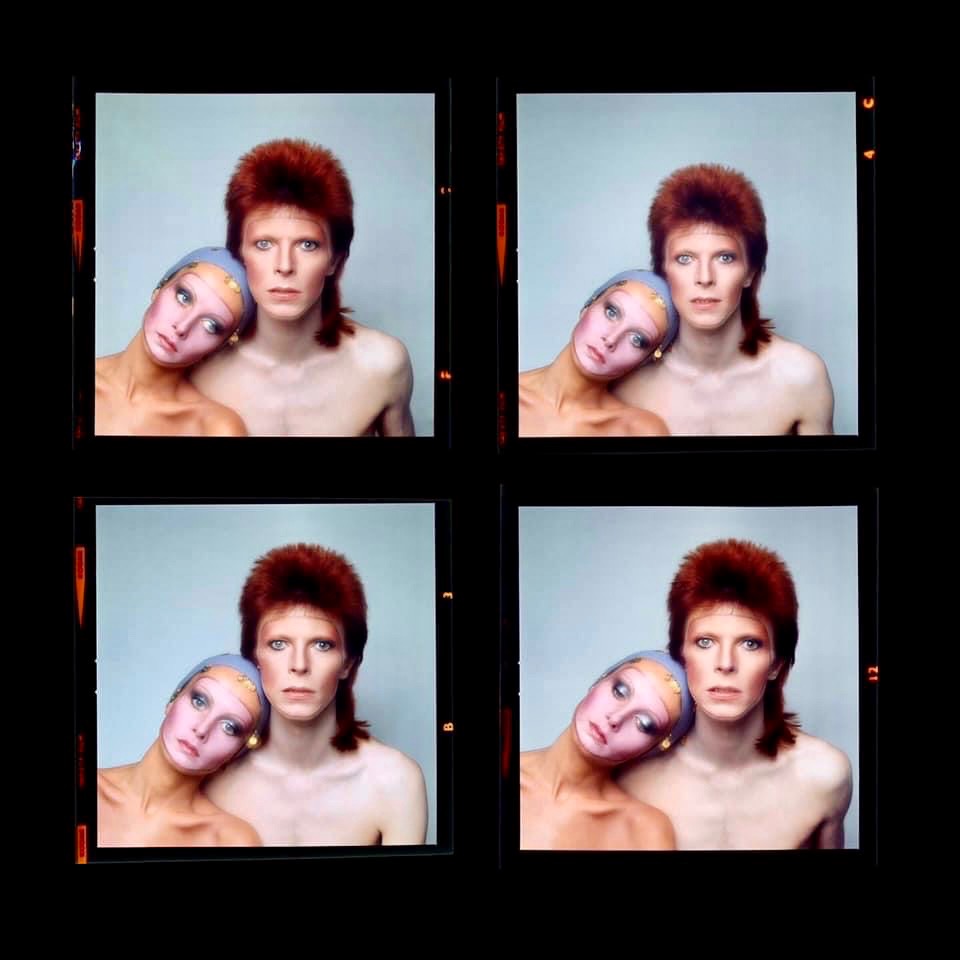 Bowie’s management, Mainman launched a billboard campaign on the Sunset Strip in Los Angeles for all their artists; Bowie, Mott The Hoople, Mick Ronson… including a contest in which the winner’s face would replace the blank Twiggy. That’s why, in the final version, “Twiggy” looks a bit strange! 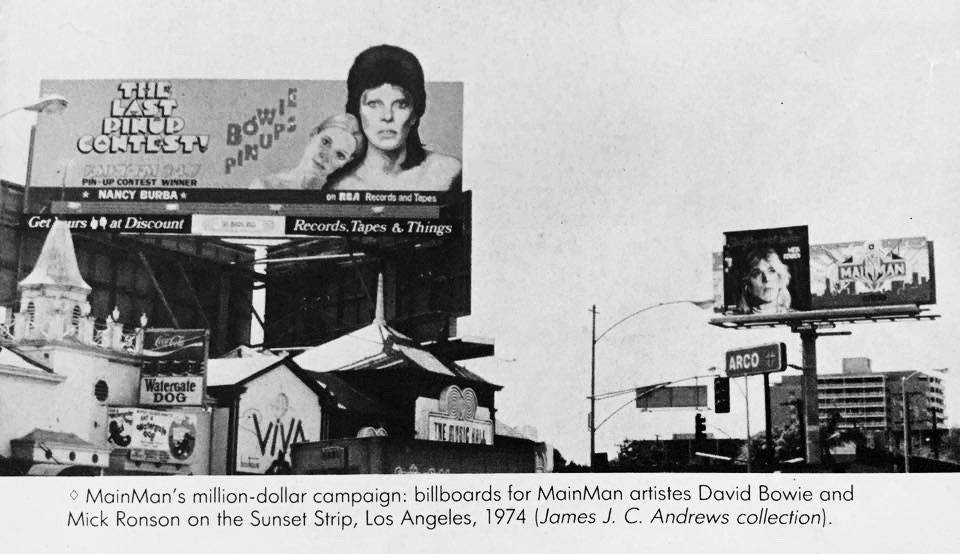 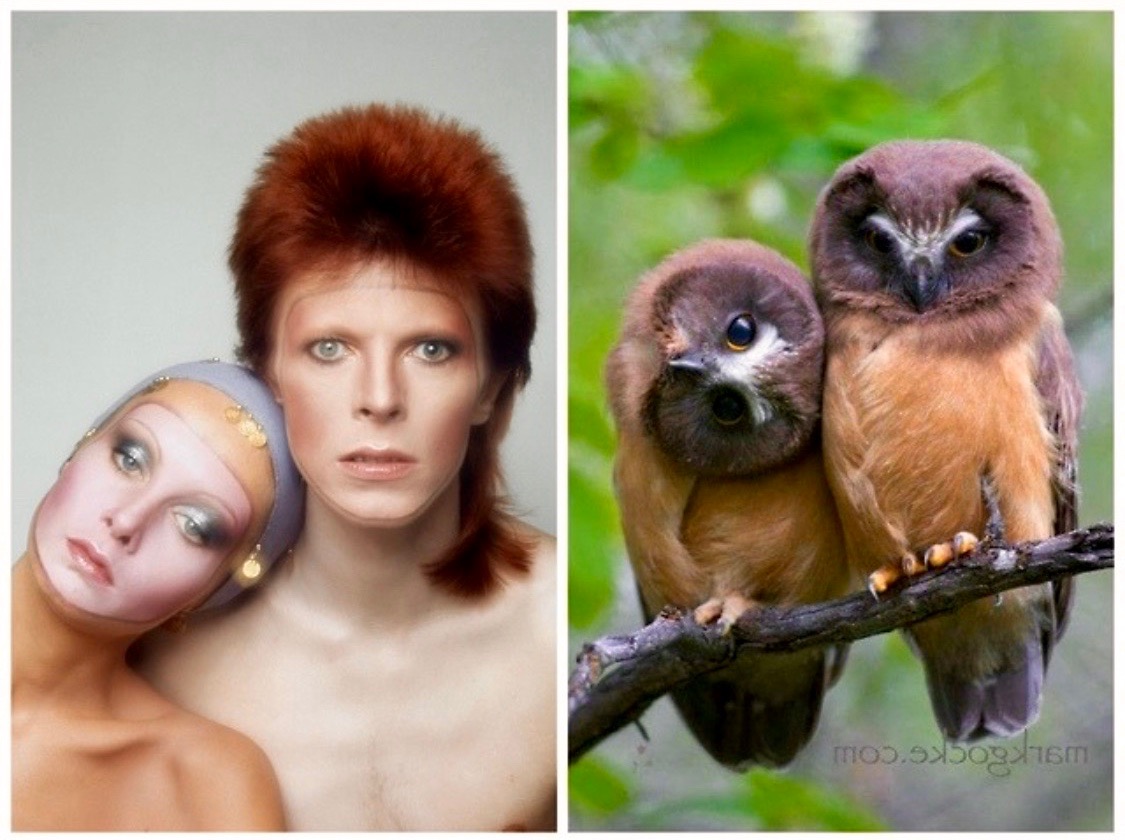 Also see my story about the 1974 Mainman billboards…