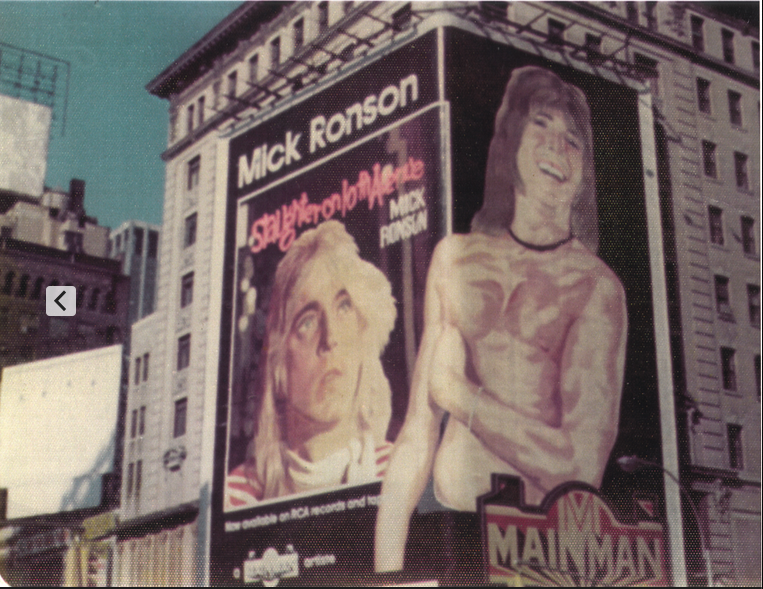 I’m obsessed with the double MainMan Billboard ad in NYC – for Mick Ronson’s Slaughter on 10th Ave. album in 1974. It was on prime real estate, at Seventh Ave between 46th and 47th St.
I was actually there on a school trip to see the musical Grease (which I had no interest in – especially when I noticed them putting up the Ronson billboard with huge, horizontal strips of paper). They worked upwards, and were just above his scarf on the album cover, when the teacher dragged me inside to see the play, unyielding my demands to let me stand on the corner with prostitutes (at age 15) and watch the workers construct the billboard! When we came out after the play, they were putting on the strip with his eyes!!!
In retrospect, it’s probably a good thing that the teacher didn’t let me stand there alone… Look what’s playing at the Embassy theater; Thunder Fist and Chinese Mechanic!
Photo: Theo Tersteeg 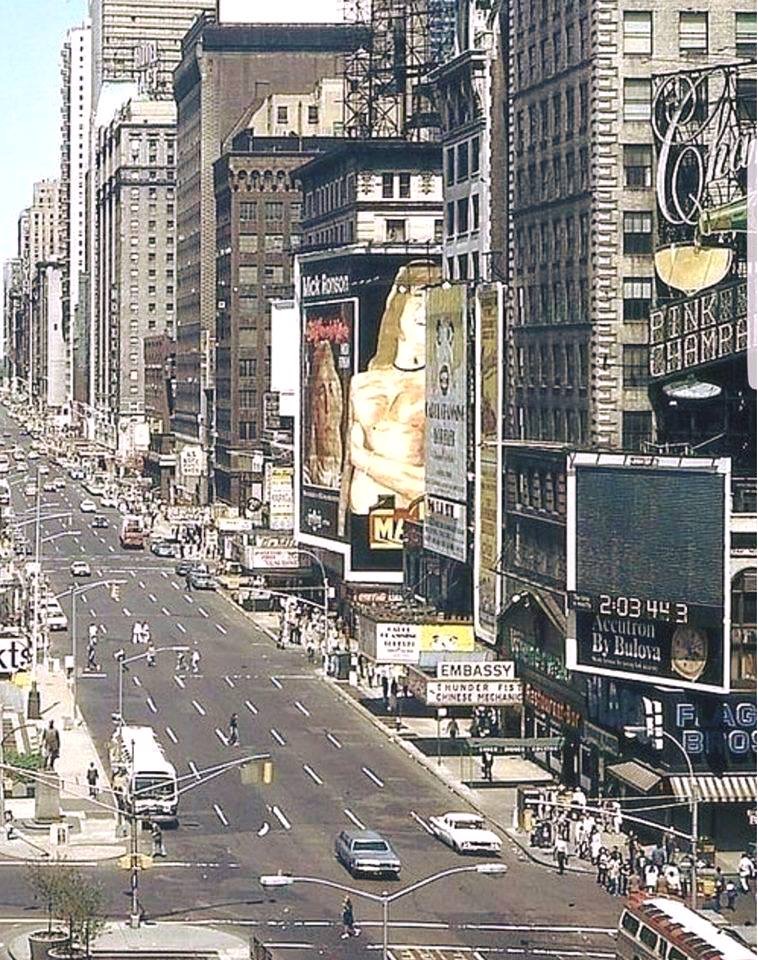 All billboards were painted at the time. The larger one of Mick hardly looks like him at all. They are based on two wonderful photographs by Leee Black Childers shot for Mick’s debut solo album Slaughter on 10th Avenue. The billboard cost $5,000 per week. In a fortunate twist of fate, the painters had gone on strike at the time, and the billboard was left up for ages!
“I remember that huge picture if Mick in Times Square. They put it up and the bill posters went on strike – and it stayed up there for months!”
– Ian Hunter, Rock N’ Roll Sweepstakes by Campbell Devine 2020.
It’s amazing to see how few cars there were in NYC  at the time – and that the traffic on 7th Avenue was in the opposite direction back then.
I always remembered the 2-sided corner building where the double Ronson billboard had been. Decades later, I found photos of it.
While watching  the movie, The Sunshine Boys, (November 1975) I noticed the craziest thing! 6-1/2 minutes into the start of the film, there is a shot of the same building (over the shoulder of the George M. Cohan statue). The shape of the MainMan logo is visible, but the rest of the billboard is all white. I suspect that this was in preparation for the next billboard – the Panasonic one, which was there for decades. My logic is that the Carol Channing billboard atop the Palace theater is also white in the film – you can see the old billboard bleeding through the white, so I suspect that the Ronson one is being whited out, rather than this being prior to its construction.
See my collection of photos below – of the Ronson billboard in stages of completion.
The next photo set is of the MainMan billboards in Los Angeles in 1974 on Sunset Strip, including Mott the Hoople and David Bowie. Mick is lurking behind his pal Bowie. There is also a close-up of the L.A. Ronson billboard.
The Bowie billboard picturing his album PinUps was an ad for his upcoming American TV special The 1980 Floor Show (The Midnight Special). It was also a radio contest (“The Last Pinup Contest) – the winner would appear on the billboard! That’s why ‘Twiggy’ looks so weird on the ‘after’ billboard – as it’s the contest winner’s face drawn in.
You might enjoy my ‘Bowie 1980 Floor Show’ Facebook Group – all about Bowie’s final appearance as Ziggy Stardust. Lots of info and hundreds of photos!
Click here and send a request to join!  https://www.facebook.com/groups/104046166612946/
I have included a photo of the Diamond Dogs billboard on Sunset as well (an ad for Bowie’s live shows at Universal Amphitheater).
An added bonus: My collection of photos of the same NYC building through the years with some interesting ads on the billboard where Ronson appeared. A Panasonic billboard was there for many years beginning in 1977… 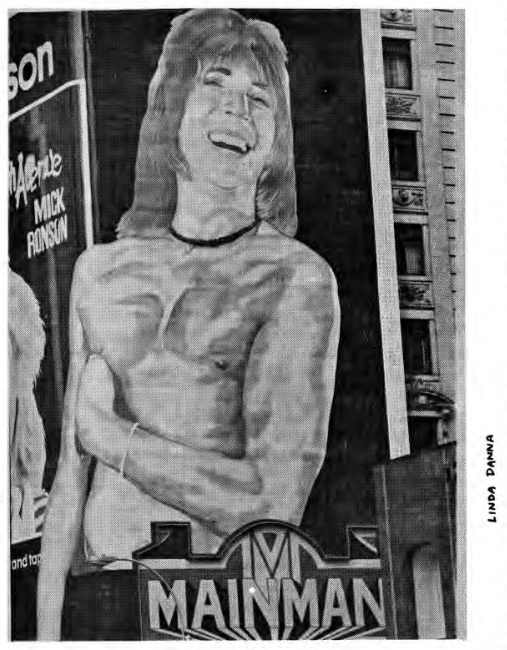 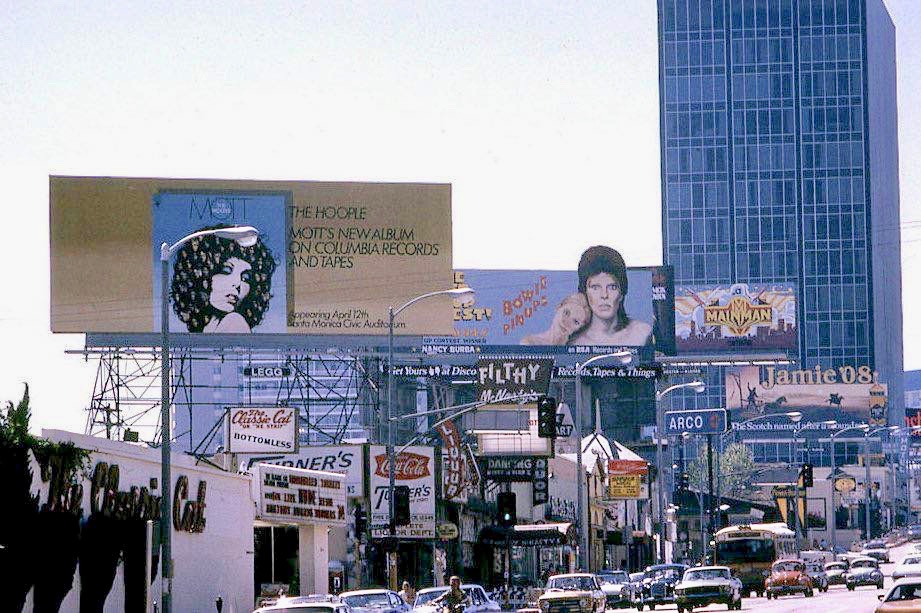 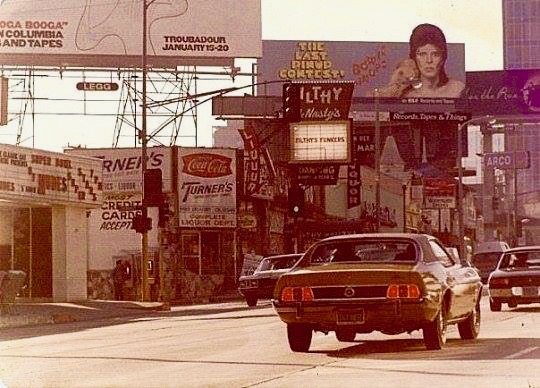 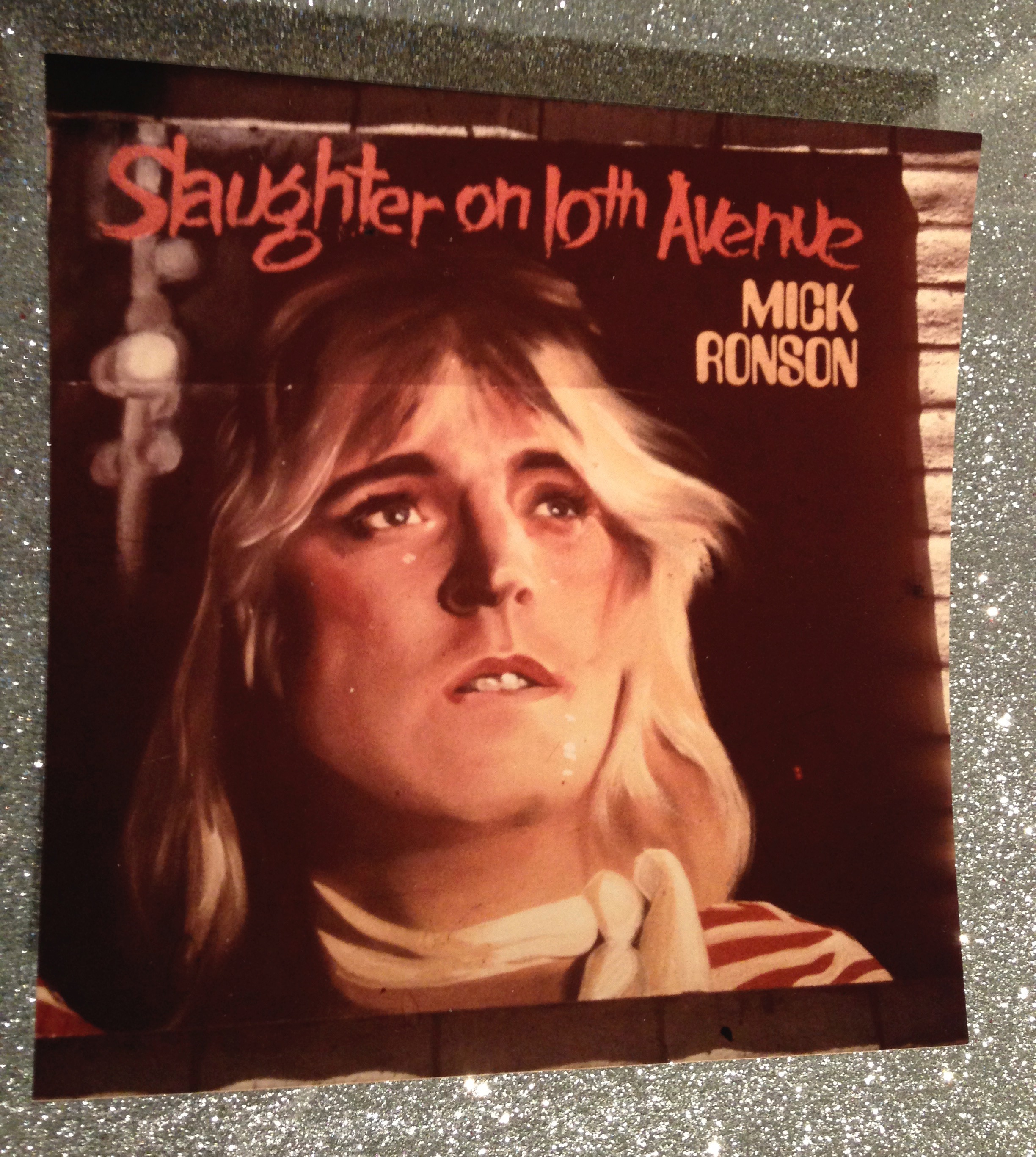 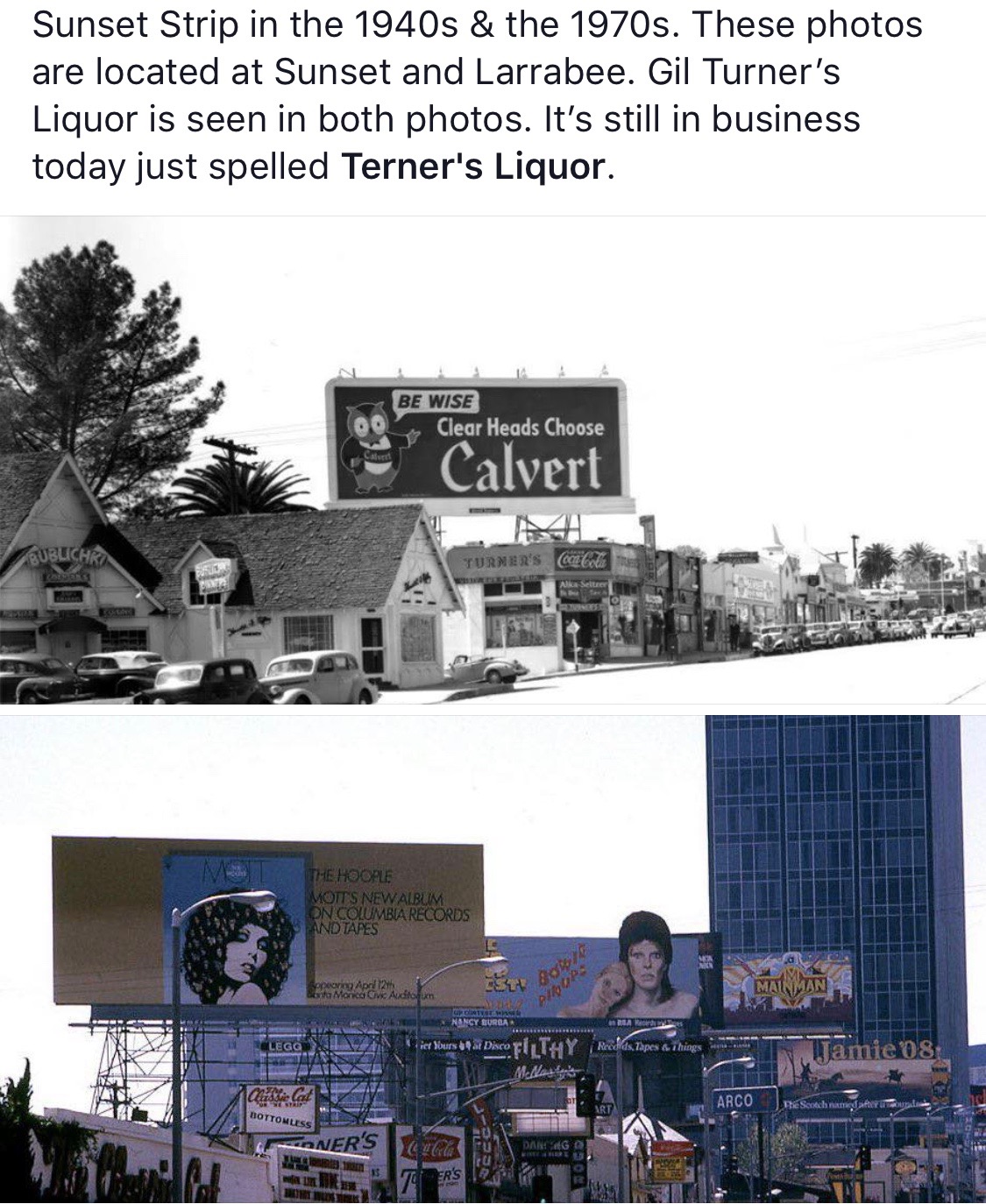 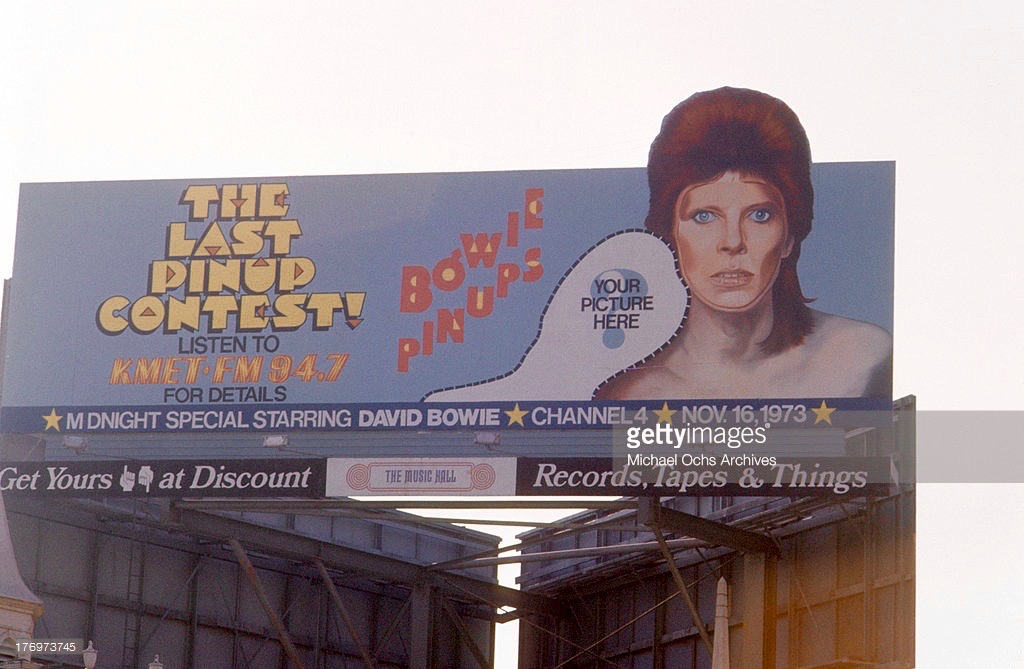 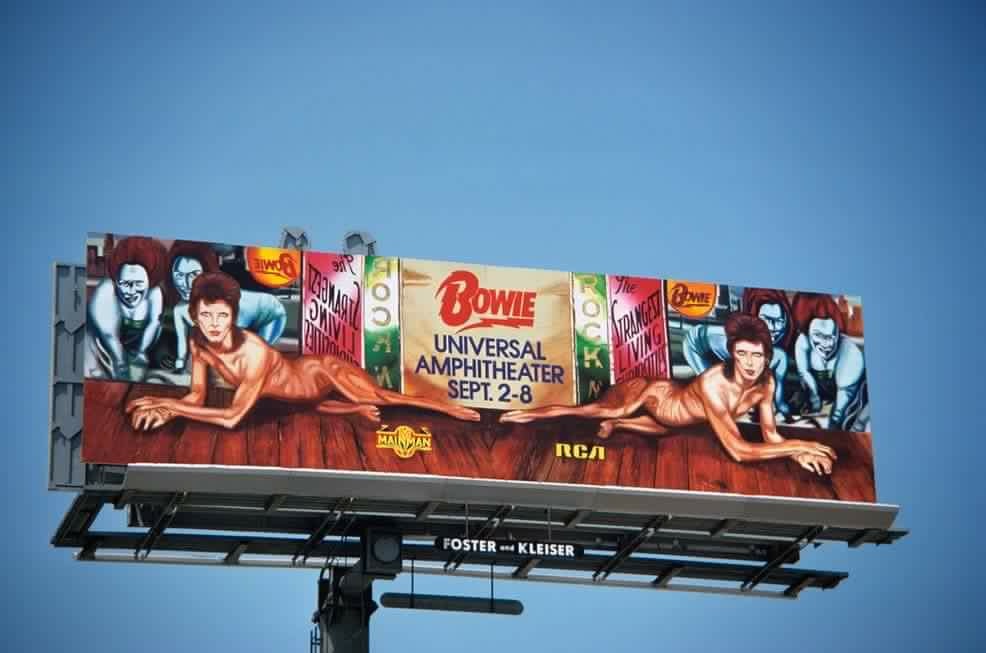 An extra bonus! Ziggy On Sunset! 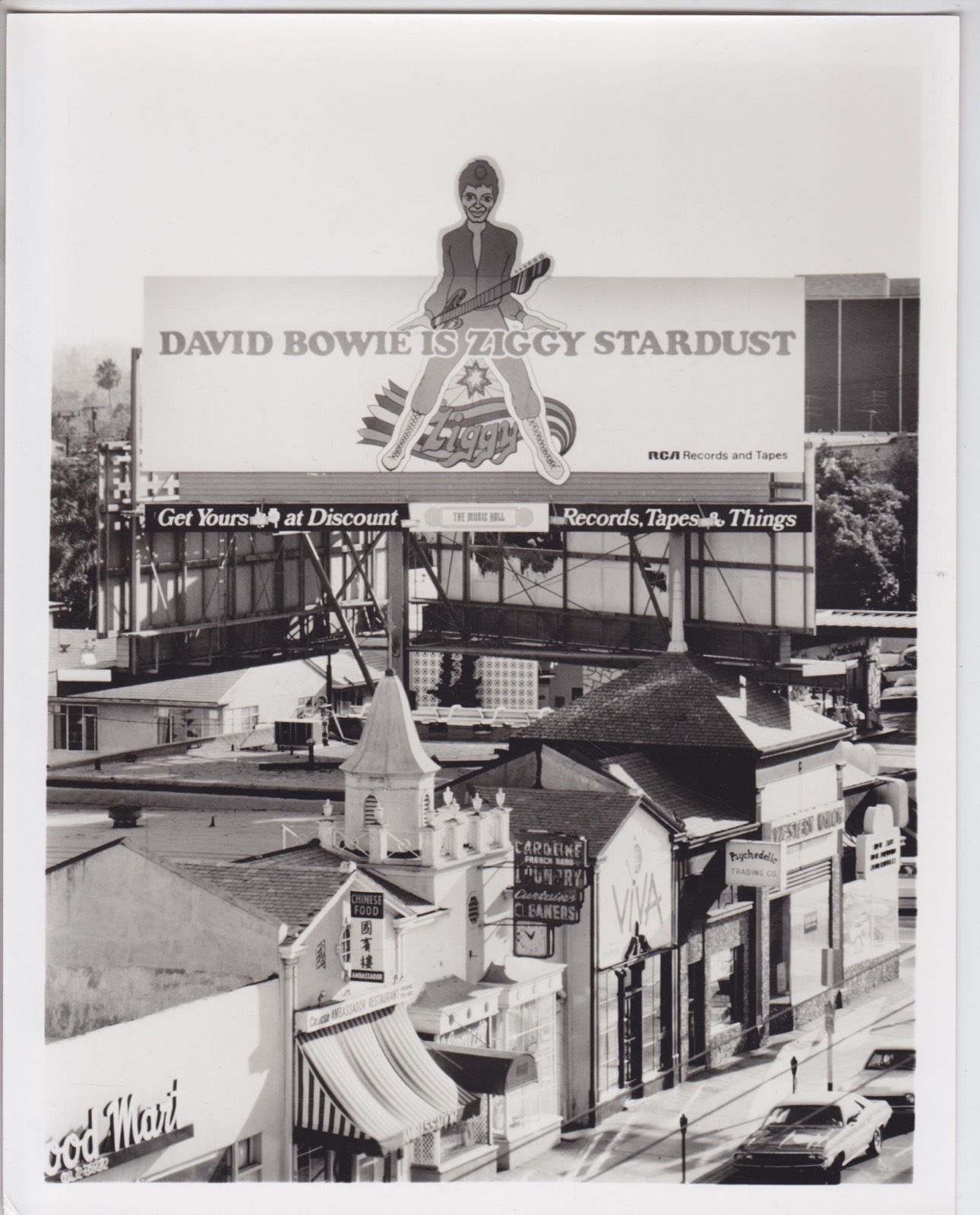 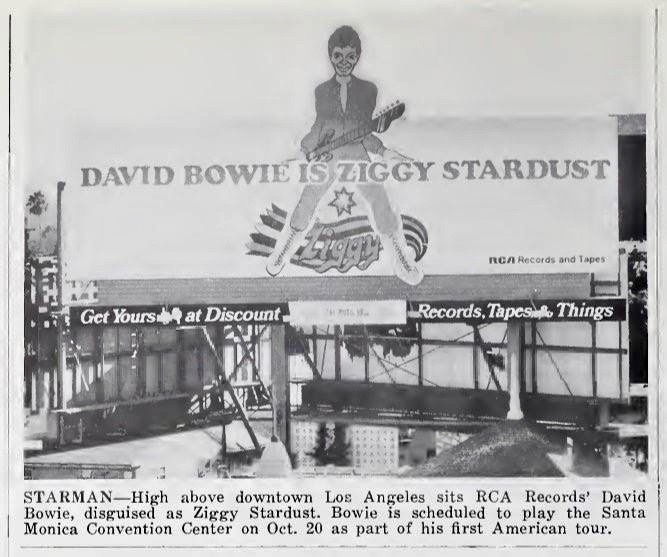 AND… The NYC billboard through the years… 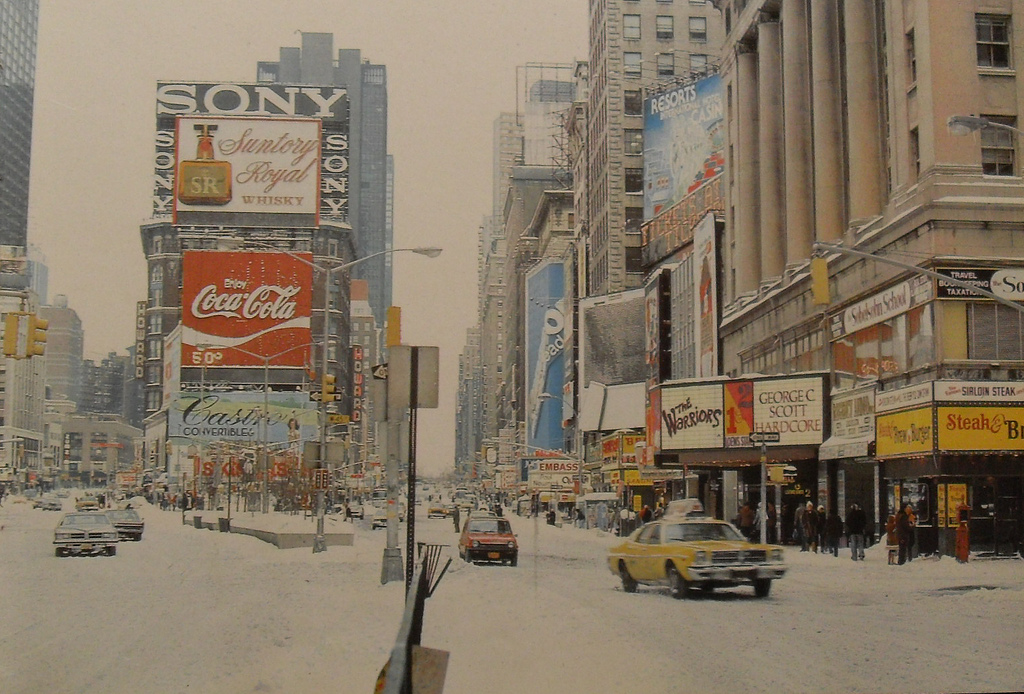 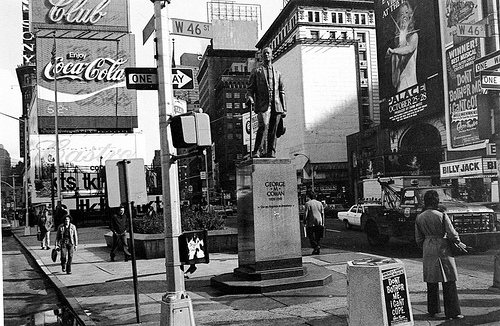 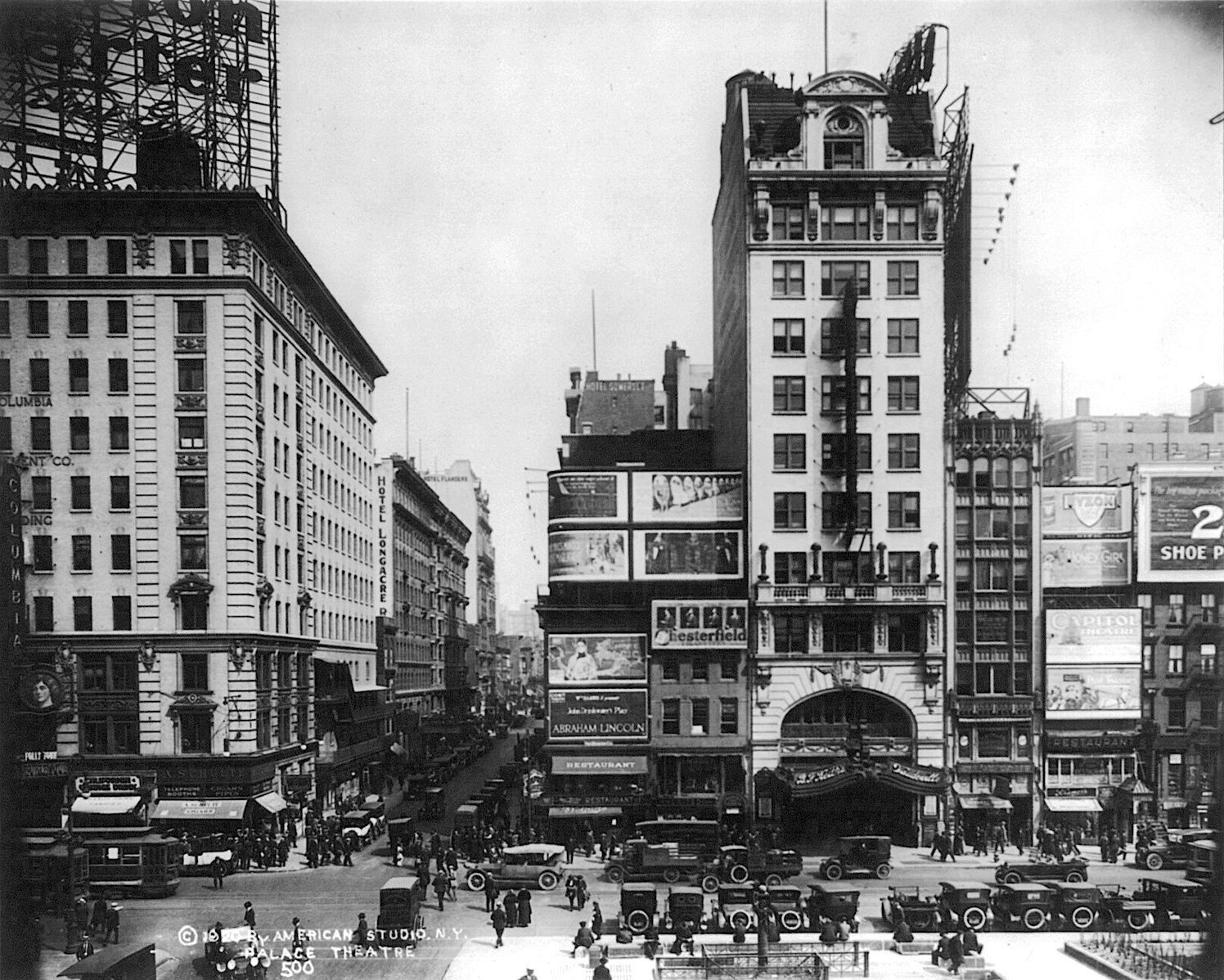 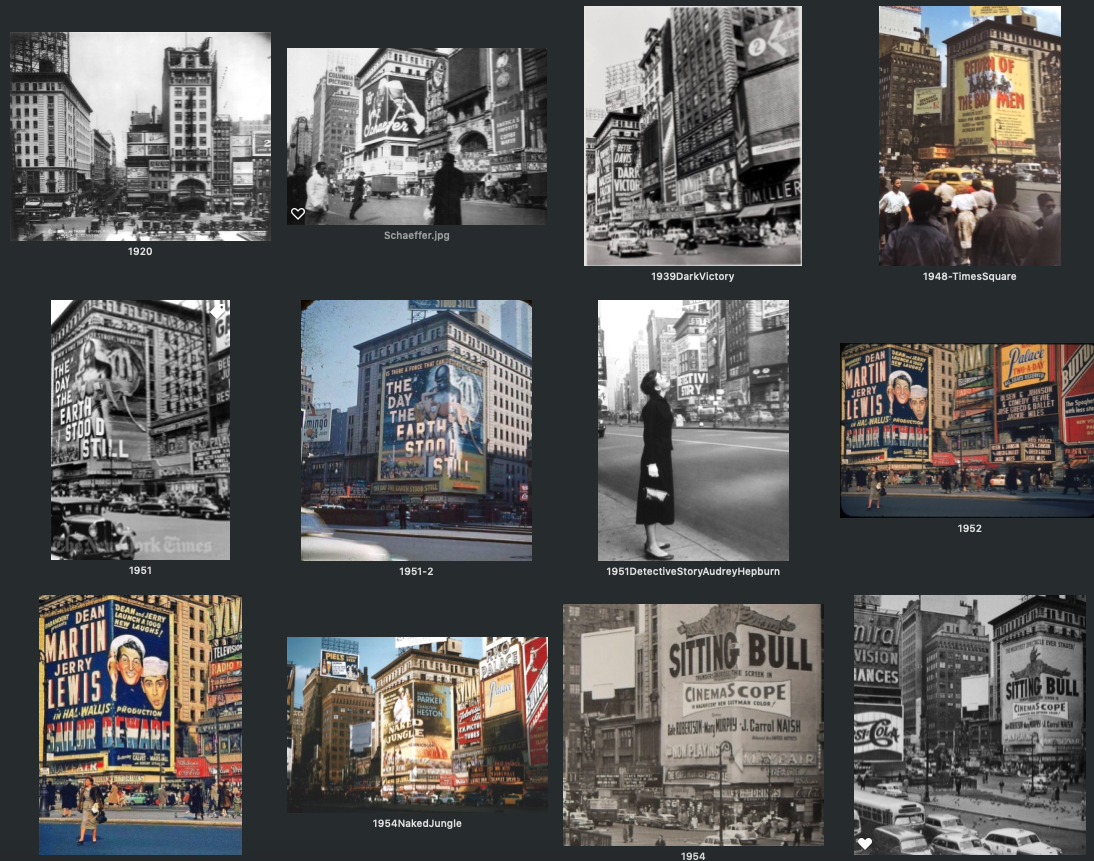 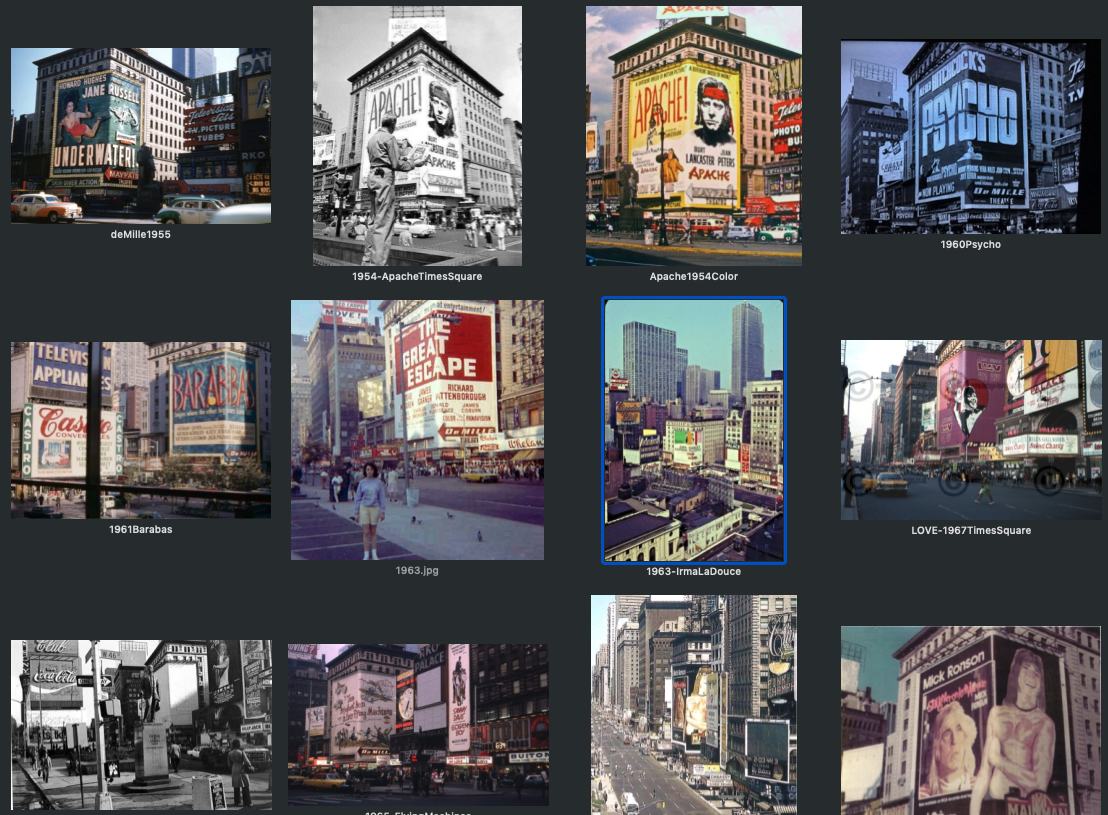 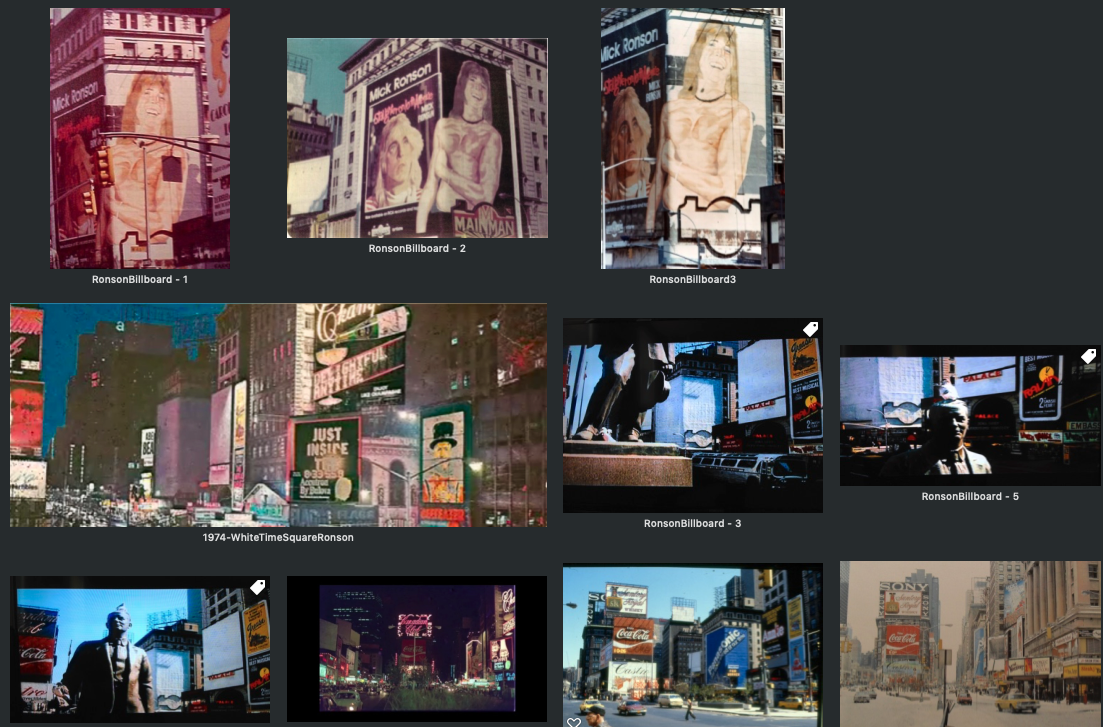 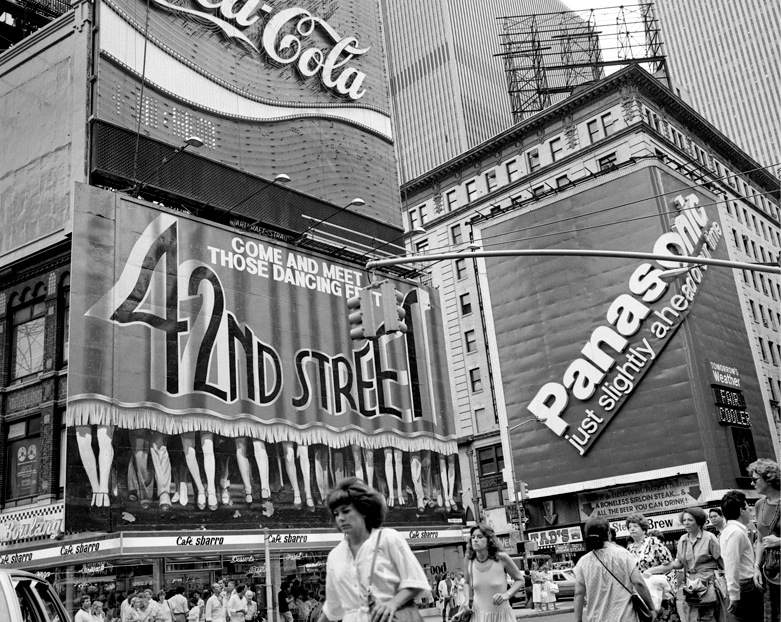