© Madeline Bocaro, 2020. No part of this site may be reproduced or reblogged in whole or in part in any manner without permission of the copyright owner.

Everything is topsy-turvy. ‘Down for you is up.” The Velvet Underground, the noisy New York City band – once scorned and shunned – have emerged from the subterranean depths of degradation, depravity and decadence. They have lifted the manhole cover and clamored up into the midst of their own contemporary art and music exhibition! POP!

They’ve come a long way from Café Bizarre. Now (of course after the passing of several of its members and our huge loss of Lou Reed) the band has reached their pinnacle. The public was beginning to see the light when the Velvet Underground were honored at the 2017 Grammy Salute to Music Legends, John Cale said in his acceptance speech, “Hello everybody. Lou! Nico! Sterling! Andy!! Wherever you are – look at this! Check this out – the establishment caught up with us at last!” It was really kind of sweet.

The Plastic Inevitable has EXPLODED– and we are in the midst of it! We are transported to early 1960s New York City (all that was missing is the garbage), enveloped in flickering films and light projections… And away we go!

It’s all here; The shades and black leather, THE BANANA! The whip dancing and the films. The namesake book about sexual perversions (by Michael Lee 1963). The drone and poetry of the music. The ugliness and the beauty; “Pale Blue Eyes” and “Heroin”.  The Jades, the Primitives, The Warlocks “The Ostrich”. And a room dedicated to NICO!

There are reclining silver pads on which to lie back and enjoy an array of films on the ceiling (they should have these at the Sistine Chapel)! Lots of ephemera; rare singles, posters, books and magazine covers. Walls and walls of photos. Unlike the Bowie exhibition, there were no instruments nor items of clothing to bring a more personal touch, yet somehow it still felt like home.

There is an elementary nature to the exhibition for die-hard fans who have the knowledge and extensive collections beyond what is here. The dark essence and grunginess of the band were glossed over.  However, it’s a nice representation of the VU, honoring the fascinating transitional era from which the band emerged. It is a good introduction for the uninitiated which will hopefully ignite further investigation and listening. For those who grew up with the band, it’s just a place to go for a warm, fuzzy feeling of nostalgia.

Expensive phone and computer accessories in the gift shop emblazoned with VU photos, lyrics and slogans like, ‘Kiss the boot’ convey how much time has passed since the formation of the band. The large and larger plastic Warhol bananas for $100 / $200 were overpriced. And the Edie Sedgwick carry-all bag inscribed ‘Poor little rich girl’ were disturbingly sad to see.

The opening of the exhibition is an incredible film juxtaposing the divergent dark and light childhoods of Lou Reed and John Cale (born one week apart in March 1942) with alternating narratives by Cale and by Lou’s sister. Footage from Lou’s segments featured those weird 1950s black and white educational films about mental illness with scenes of mental hospitals and closeups of rolling eyeballs and shock therapy, and footage of Lou as a dejected child. Cale’s featured far more pleasant and colorful images.

Lou’s sister’s narrative, “As Lou entered his teenage years he became anxious, avoidant, socially withdrawn – then hyper-focused on music, he found himself. Experimenting with drugs, he closed the door on communication with our parents.”

Cut to John Cale telling his own story of an only child whose passionately devoted mother procured classical piano lessons, which led to his joining the Welch Youth Orchestra.

Reed: My parents returned from NYU with Lou limp and unresponsive. He had a nervous breakdown… a family secret, our private and unspoken burden.

Cale resumes his tale of interest in experimental composition and concrete music. He attends the University of London.

Reed: “Doctors thought he might be Schizophrenic… unable to function… anxious, socially unresponsive, dead-eyed, non-communicative. A psychiatrist recommended electroshock therapy and told our parents that they were to blame for their son’s severe mental illness.”

Cale fulfills his dream of traveling to New York, entering the world of elegant classical music.  But he was really seeking “a revolution that was quietly rumbling inside me.”In 1963 he meets LaMonte Young and the Fluxus crowd.

“I was enamored with what was hidden

and what would become my milieu for years to come

Reed: “I watched my parents assisting Lou, unable to walk after treatment, stupor-like. Our family was torn apart by those wretched treatments. We each suffered the loss of our dear sweet Lou in our own private hell, unhelped and undercut by the medical profession.

Then Lou did get better and went off to Syracuse University…”

It’s more than a coincidence that the opposite attraction of Reed and Cale occurred and that they forged a friendship and a band! They both had the same dreams and nightmares. 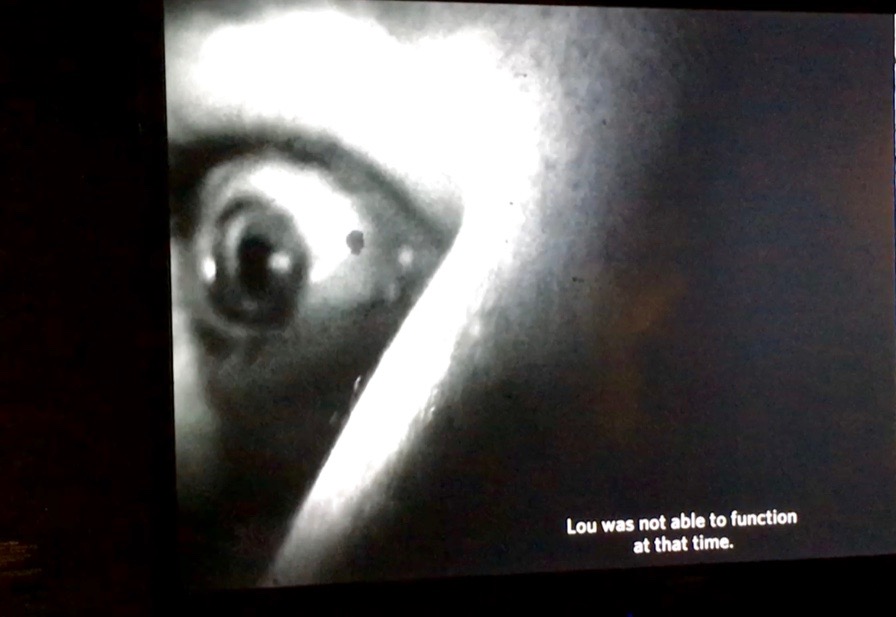 There are large pages to flip through and read about each band member. The Velvets’ relationship with Andy Warhol and his Silver Factory gang of superstars and delinquents is documented, as is Andy’s support and promotion of their live gigs. (Of course, Warhol also provided the infamous ‘peel slowly and see’ banana on the album’s cover.)

The band’s psych-out out at the psychiatrists’ convention in New York is captured in photos. It’s great that Lou got to shock the shrinks with a taste of their own medicine! Cale once said, “Lou and I were going to put out a record with his psychiatrist’s letter on one side and my arrest record* on the other.”

And what’s that I hear in the distance coming from a back room? “Deutschland, Deutschland über alles…” Oh! That must be our dear Nico! And it is!  Billy Name’s gorgeous floor to ceiling portrait of Nico in Times Square alone at night (that could never happen now!) in her striped pants suit is striking. From the small room beams a film montage of Nico in all her phases of sheer beauty – her early modelling and advertising days, her film roles in La Dolce Vita and in Strip Tease and of course her brief singing gig with the VU. But she is so much more important than all of this. Search out Nico’s own music and the books about her, especially The Life and Lies of an Icon by Richard Watts. And also, the documentary film Nico Icon.

A small section on Edie Sedgwick has a lovely film reel. (For further reading, there is nothing better than Edie – An American Biography by Jean Stein). Lighting designer Danny Williams who pioneered strobe lights and designed the live EPI shows was also remembered in a clip from the documentary about him, A Walk Into the Sea (into which he disappeared at age 26). Tributes to others are relegated to the lower level, such as Candy Darling and filmmaker Jonas Mekas.

Although peripheral music was playing, and our headphones plugged into specific film screenings, the Velvets’ actual songs were not prominently featured. The space gave us more ambiance and homage than actual depth of knowledge.

Despite all the amputations, it was a nice tribute to the band who turned their backs on the audiences and gave them the finger. We were told that it would take only 2 hours to see everything, yet I managed to stay for almost 5 hours.

There was slight mention of the 1965 pre-Velvets Primitives drummer Walter De Maria. His work, The New York Earth Room is still on permanent exhibition. You can still visit this room full of dirt (a 3,600-square-foot room filled to a depth of 22 inches with 250 cubic yards of earth). It is actually overwhelming.

You can also see De Maria’s work, The Broken Kilometer (1979) another permanent installation at 393 West Broadway in New York.

And my Nico stories:

Another VERY IMPORTANT article that should have been featured in the exhibition:

BELOW IS AN EXCERPT – Click here for the full article (& photos)

So here we are on the fiftieth anniversary of The Velvet Underground & Nico and its mysterious banana cover art, and I felt that I have held this secret for way too long…
This thing was hanging on my kitchen wall for three decades, in New York and LA and is now in secured storage for reasons which are about to become obvious. This is how I found it: One day in the mid 80s I was cruising around the Lower East Side aimlessly—as I had done most of my life up to that point—running into friends, looking at stuff people were selling on the street, stopping into Manic Panic, Venus Records, St. Marks Books, and any junk shops that caught my eye. There was one on Broadway that I had never seen before right down the street from Forbidden Planet and the greatest place ever, the mighty Strand Book Store.

I went in and there was a lot of great stuff for me. I found some old records, a huge stash of outrageous and disgusting tabloid newspapers from the sixties which I kept buying there for a couple months afterward, and some cool old knick-knacks. I knocked into something on a crowded table full of junk and heard a big CLANG on the cement floor. I bent down to pick it up. It was one of those cheap triangular tin ashtrays that usually advertised car tires or something mundane. I picked it up (it was face down) and when I turned it over I was surprised to see…THE BANANA!!

It was an ad for bananas printed on a cheap metal ashtray.

Don’t you like a banana? ENJOY BANANA. Presented by WING CORP. designed by LEO KONO production”

I thought wow, this is cool! But over time I realized that I had quite literally stumbled across a true missing link. I figured I’d use it for something big one day, but I never did. UNTIL NOW. Ladies and germs, Andy Warhol and Velvet Underground fans and scholars, without further ado I bring you THE MISSING LINK! A true Dangerous Minds mega exclusive! (As Jeb Bush would say “Please clap.”).

(Please forgive my indulgence in the banana photo -op.) 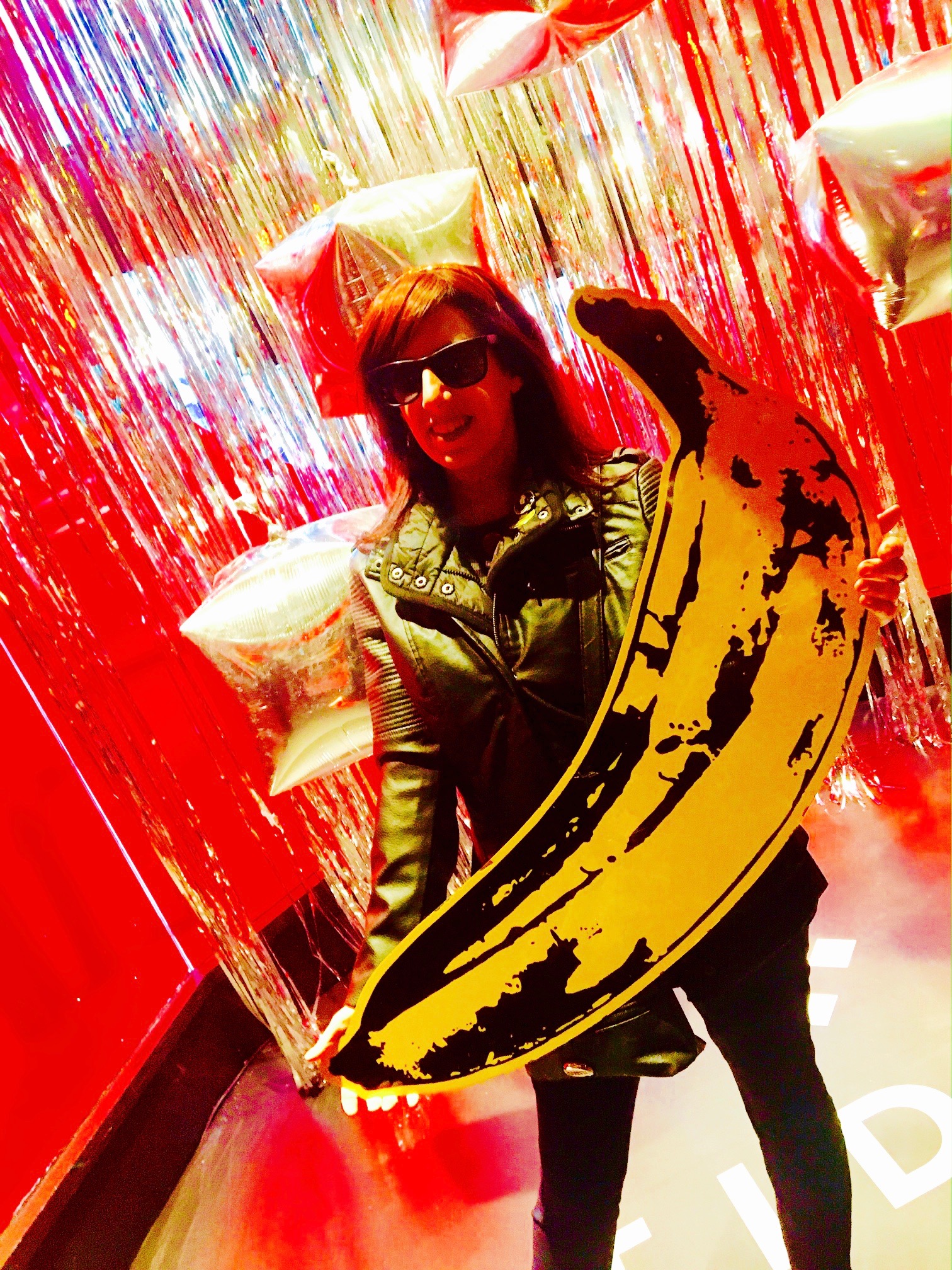 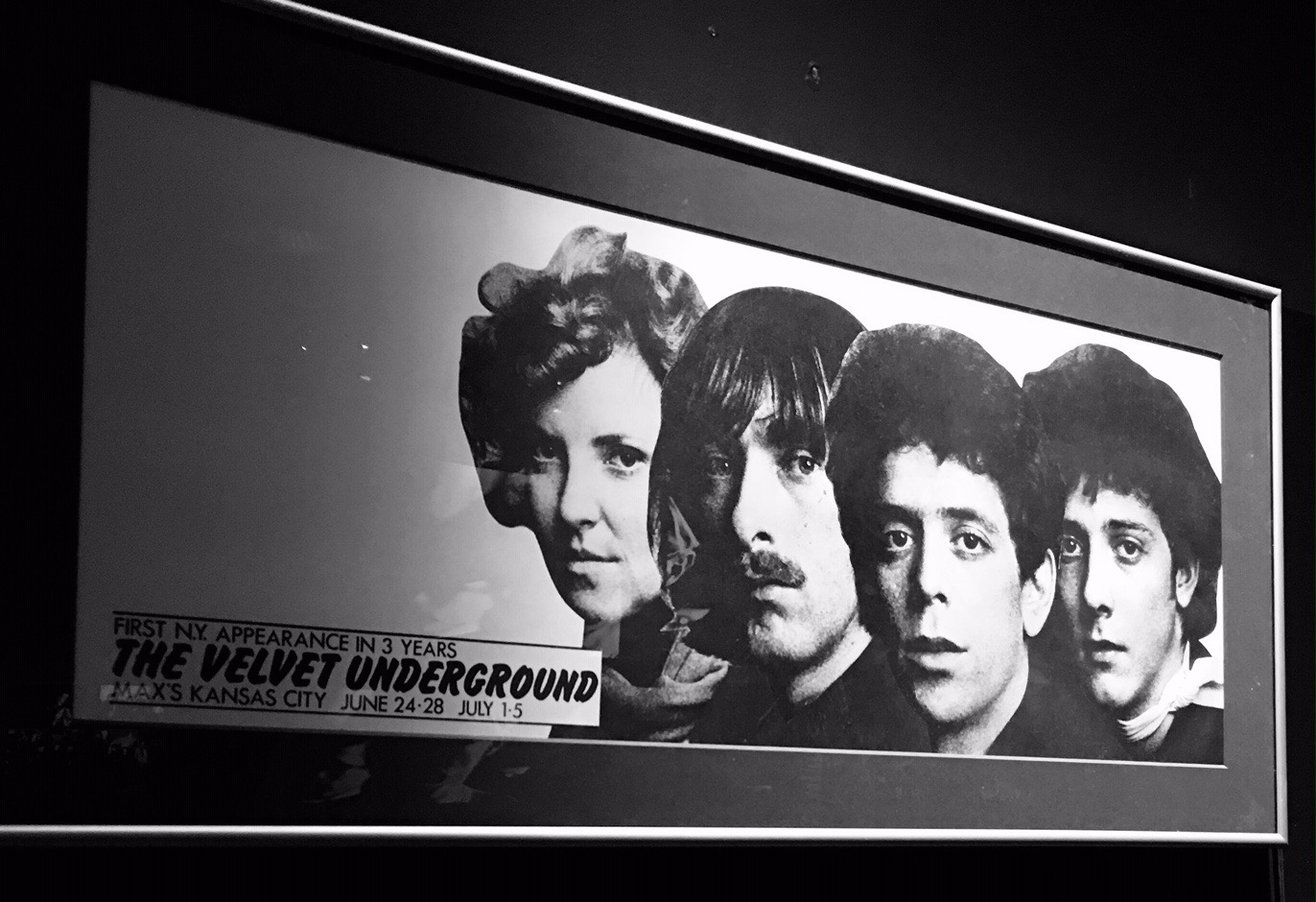 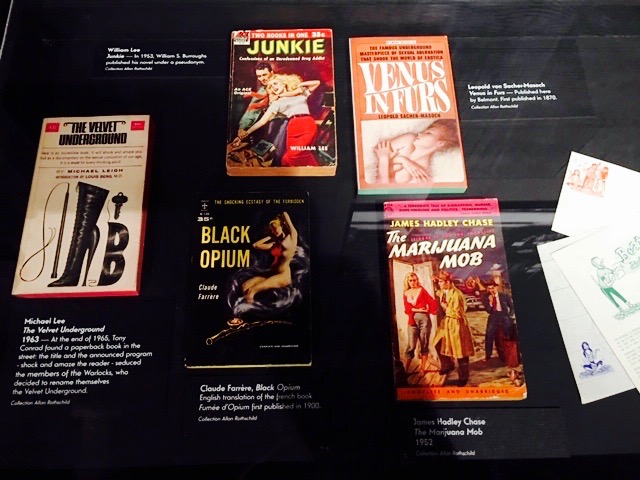 Unpeeled banana sticker from the factory

(from my collection, not in the exhibition). 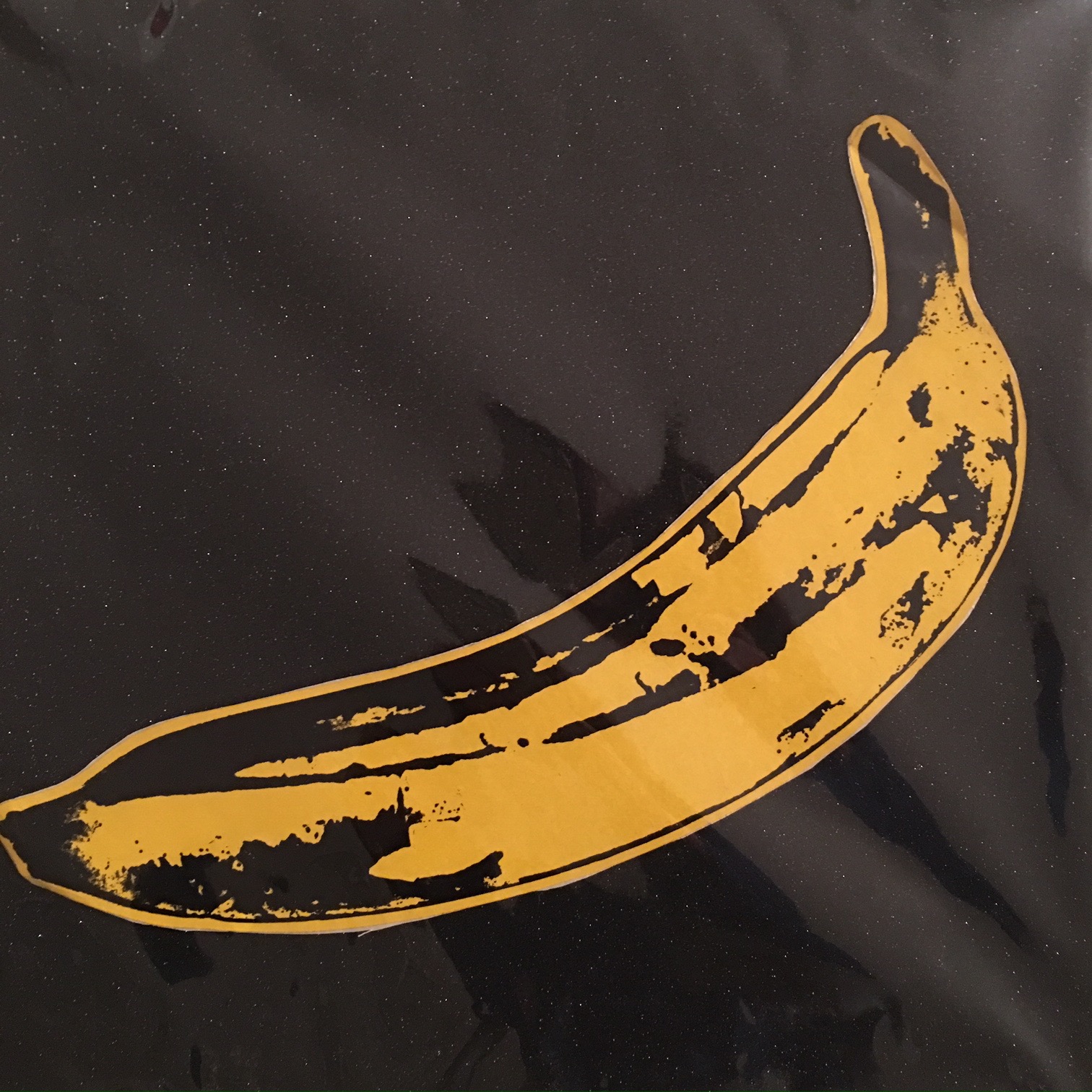 PLEASE EXIT THROUGH THE GIFT SHOP! 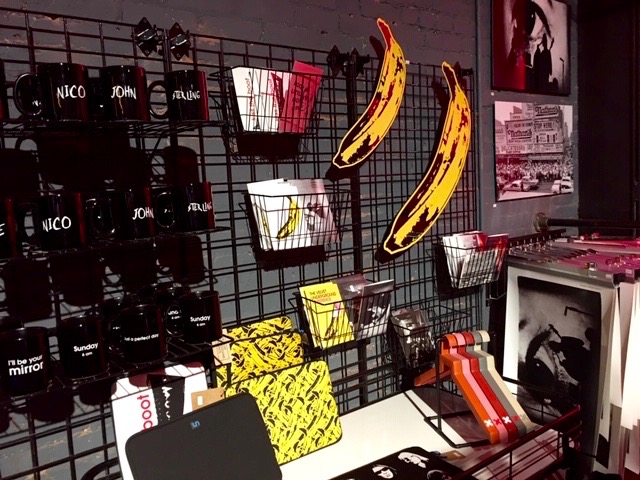 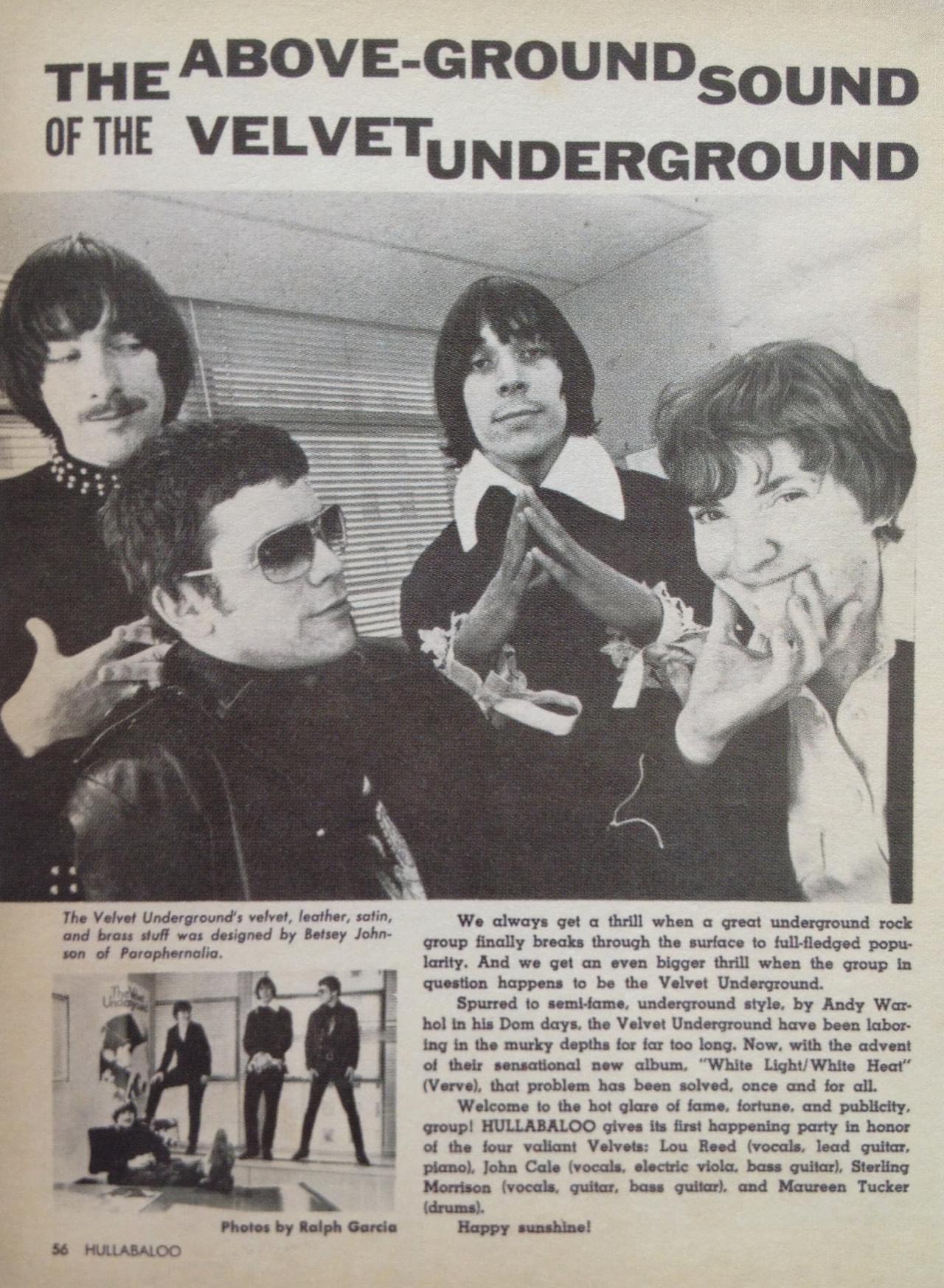 2 thoughts on “The VU: Overground!”