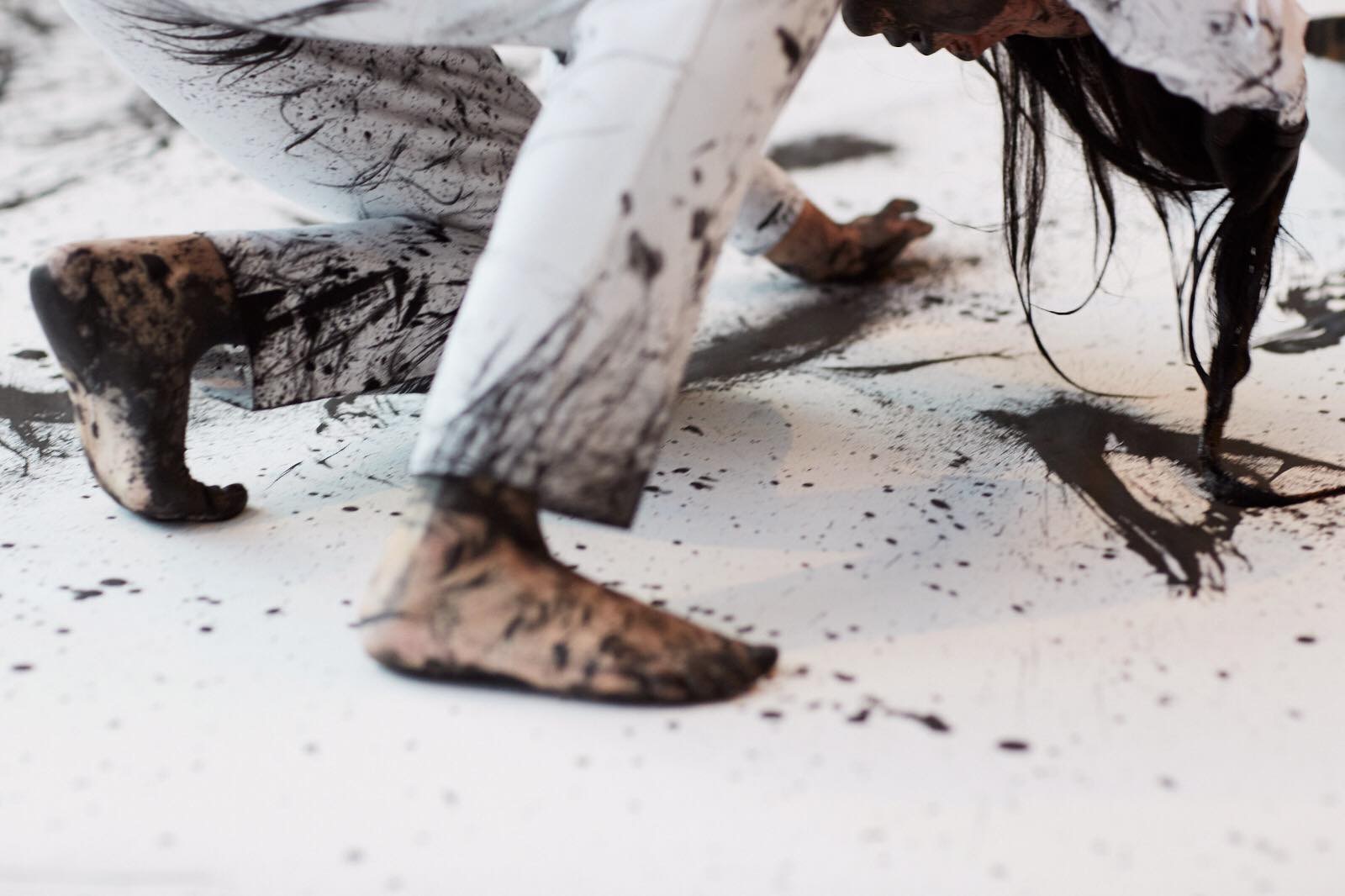 Following her intense performance of Yoko Ono’s Cut Piece (as Echo Morgan) at the Peace Is Power exhibition in Leipzig (April 2019), the amazing artist Xie Rong performed another of Ono’s works at the museum’s retrospective of Yoko’s career. Although Yoko’s Painting Until It Becomes Marble is an actual painting rather than a conceptual one, Rong performed a live interpretation of Yoko’s work. Immersing herself in paint and becoming a part of the actual work is an integral aspect of Xie Rong’s art. She applied her own method to Yoko’s static painting, and the result was stunning.

Yoko’s original work is a black and white ink drawing which is an accordion style fold-out. It was first shown during her first solo art exhibition Paintings and Drawings by Yoko Ono, at Fluxus founder George Maciunas’ AG Gallery in New York City.  Painting Until It Becomes Marble came with Yoko’s instruction that visitors were to “cut their favorite parts until the whole thing is gone”. It was also shown at MoMA in 2015 as part of Yoko Ono: One Woman Show, 1960-1971.

Xie Rong’s live interpretation of Yoko’s painting was stunning. Yoko’s original painting actually has some ‘movement’ in its accordion folded shape. Rong took it to a new level, breathing new life into the piece.

Location: The room with cricket cage

Reverently and ceremoniously, the artist stood quietly in the huge empty space with extremely high floor-to-ceiling windows emitting a background of pure light. Dressed all in white, Xie Rong stood with two bowls at her feet, one filled with Chinese black ink and the other with pure blue pigment powder. The artist combed the ink through her long black hair, saturating it and began to paint on a very large canvas on the floor.

Rong’s barefooted dance began – at first light and graceful like a ballerina, then more intensely, furiously jumping as her drenched hair splattered paint in all directions and on herself. ‘Jack the Dripper’ (Jackson Pollack) has fierce competition! The chaotic calligraphy continued with her head to the floor, making brush strokes. Kneeling with her head down on the canvas, submitting to the work in reverence, she made thicker strokes and swirls. Covered in ink, her white clothing and skin took on the characteristics of the actual artwork.

“An amazing aspect of the performance was the sound! This heavenly space is where they displayed Yoko’s cricket cages. I sang this song and told the story about losing my mother in law two weeks ago. And I invited audiences to rise the painting with me! But the paper dropped and become a cloud!”

Some blue ink was included, merging Rong’s own most personal work Be the Inside of the Vase with Yoko’s ‘…Marble’ painting.

Rong’s piece, Be the Inside of the Vase reminds me of Yoko’s Mend Piece.

From Xie Rong’s web site: The performance ‘Be the Inside of the Vase’ was divided into two parts.The first story began with my father’s attempt to commit suicide. The performance revealed my uneasy childhood and difficult relationship with my father. I was still and silent whilst my voice revealed the narrative using a pre-recorded audiotape. In the second performance the story moved towards my relationship with my mother. Through my rather brutal personal history I addressed sexually political statements such as: from my father: “Women should be like vase, smooth, decorative and empty inside!” From my mother: “Don’t be a vase, pretty but empty inside, be the inside, be the quality!” From myself: “This is my voice, my story, my childhood, I am not a vase!.” 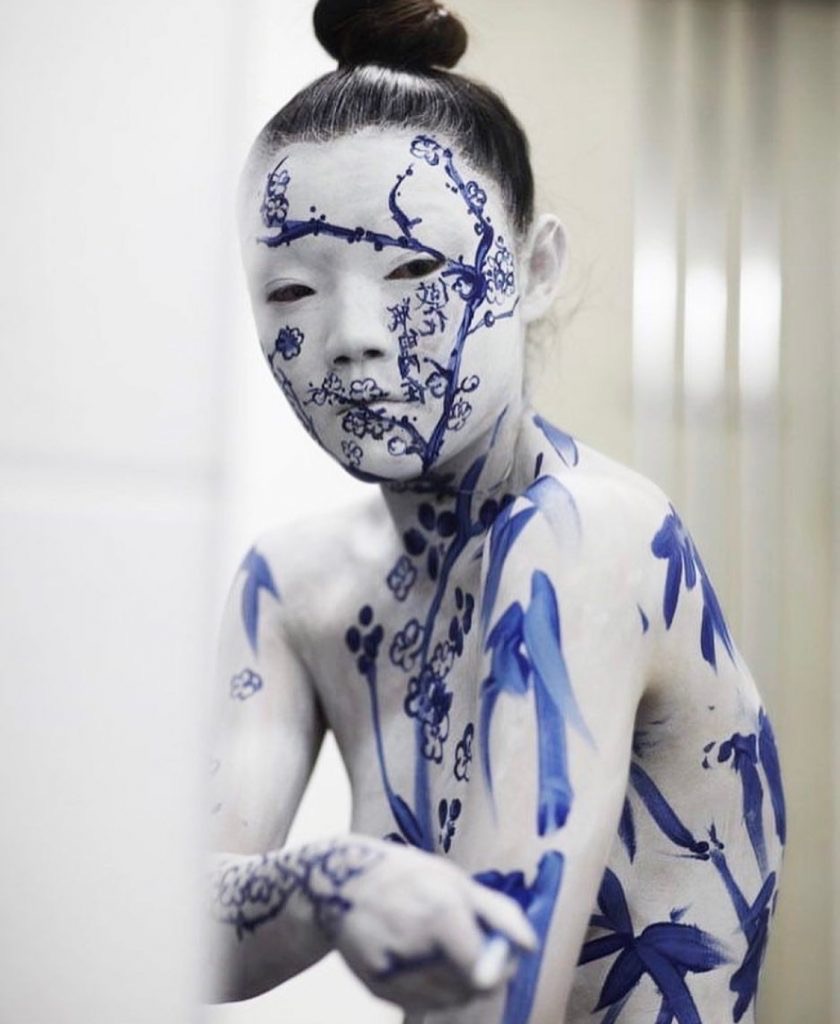 After hair painting, the artist sang the song ‘Olive Tree’ written by SanMao. 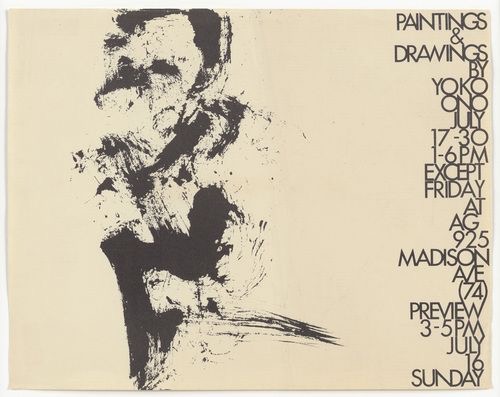 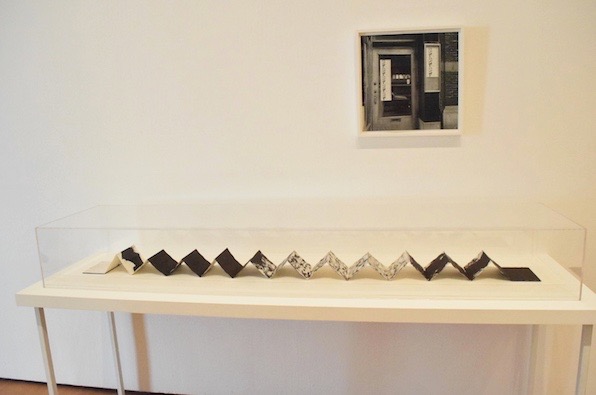 Xie Rong (@ echomorgan) presented two performances on May 10, 2019 at the @museumsnachthalleleipzig, in which she deals with works by Yoko Ono:

Story of the Stone / To Reach the Light – with music by @andreastrobollowitsch.

The internationally known performance artist Xie Rong explicity refers in many works to Yoko Ono and her groundbreaking performances.

Read about two of these performances here: Xie Rong – Stone and Light

For the opening of YOKO ONO. PEACE IS POWER AT THE MbdK (April 2019), the artist performed Yoko Ono’s Cut Piece, at that time still under her pseudonym Echo Morgan.

Since the performance, she has been performing with her Chinese name Xie Rong.

(Read about Hair Painting 2011 below) 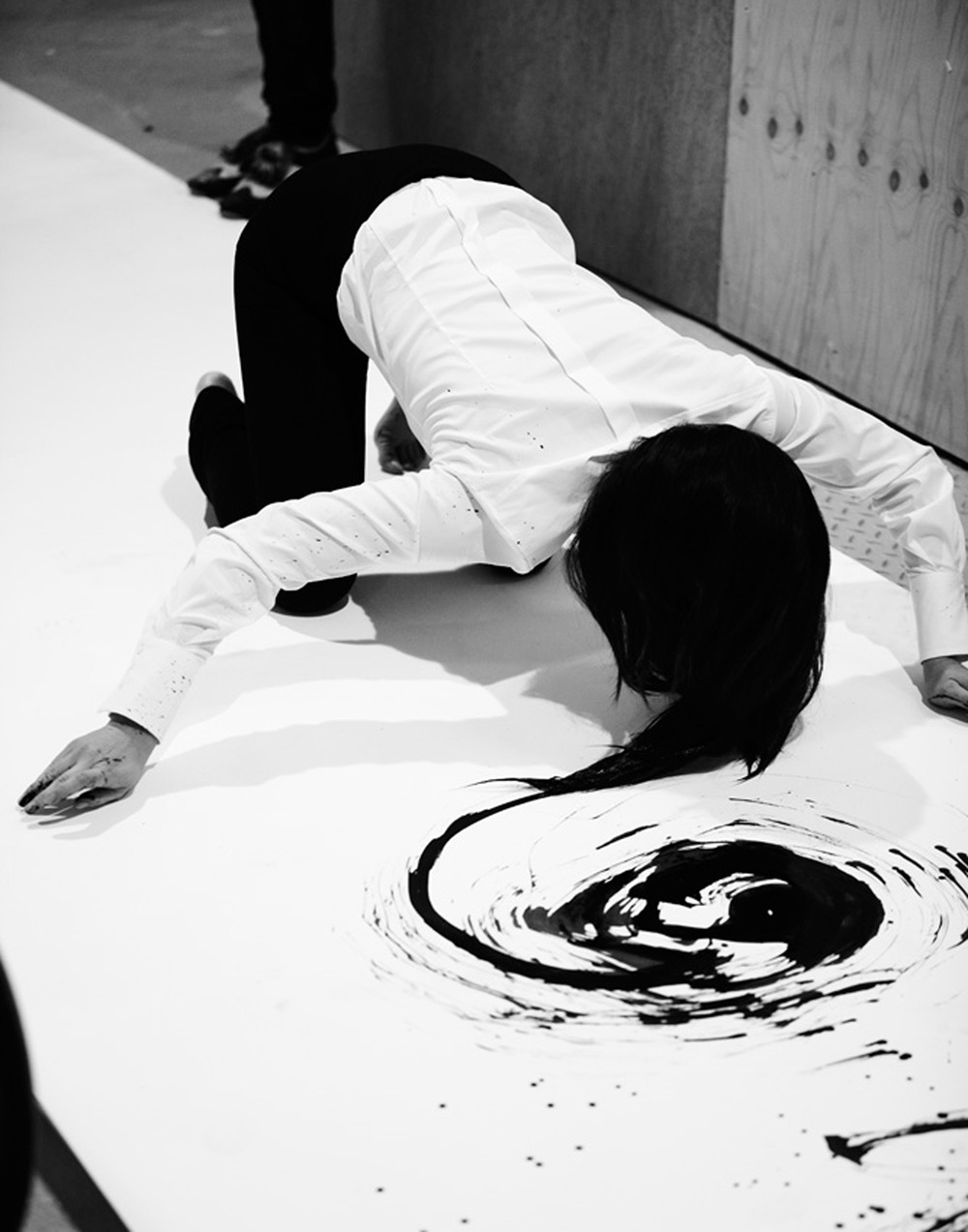 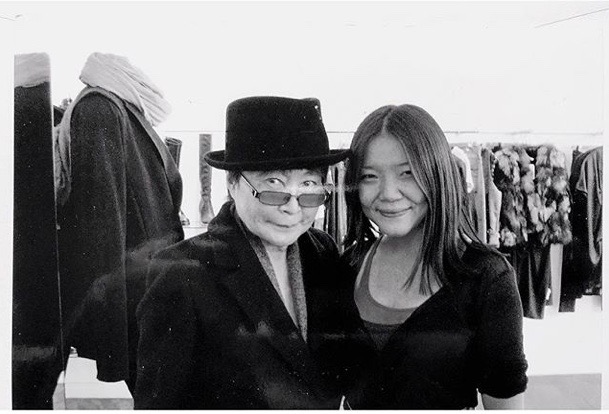 “3rd of November 2011, painted 11 meter paper roll with my hair. It marked a closure of my 7 years marriage. 2nd of March 2019, I married to my long time collaborator and life partner @jamiebakerphotography. Jamie and I hosted a big wedding in very short time. Because time was against us, his mother was very quick drifting away!

Two weeks ago my mother in law passed away after an one year long battle with cancer. When I flew into Leipzig on Wednesday, as my plane took off to the air, the infinite cloud swaddled me like a blanket. My tears flooded down my face, I wonder if I could see my mother in law in the sky? When she died, my husband said to me that he felt her love was everywhere, all around him. I surprised that he didn’t cry. He said, that she had prepared him and told him that “love never dies.” One hour hair painting, then with the help of all my audiences we wishes to rise my painting! But, the top paper rolled and collapsed! Even know we tested and I had best help from the most trusted technicians! Such as live performance! Such as life… that grief and sorrow is not easy to be rise up and it will stay with us forever …”

Artists statement about her Hair Painting in 2011:

In Screen Print class I found out the first ever screen for printing was made out of Chinese women’s hair.

3rd of Nov, 2011, I painted an 11-meter long paper roll with my hair. I spent three-and-a-half hours to process the drawing. It wasn’t about the drama of my body movement; it was about controlling my hair as a brush. I wore a white shirt and black trousers because I wanted to treat my performance as a formal ceremony. There were many people at the private viewing; they walked and talked around me. But my body was in my role – the brush that was lost in the sensation of dipping in the ink and spreading it out. I have drawn since I was a small child but never felt so close to the medium on which I was working as on this occasion. I was surprised how difficult it was to control my soft hair. The most memorable aspect was the sound of the ink dripping from my hair on to the paper and that of my heart-beat which was increasing as a result of some of the uncomfortable poses. My body transformed into a brush, a tool and an object.

Historically a Chinese woman brushes her hair the night before her wedding. Also, having his hair rolled up with a stick at his marriage indicates a man’s maturity. The Chinese word “married man” is illustrated as a male body standing up with arm open and a stick in his hair. Young women often cut their hair and put it in a small sachet to give to her loved one. In Buddhism it is a tradition to shave the head as a sign of forgetting the past and of being reborn. Using my hair to make my first piece of live art was a symbolic reflection of my personal changing life. Afterwards, I washed the ink off my hair in the shower and, when the moment the ink ran over my body I felt more alive; the fizzing water and black ink made exciting marks on my skin. 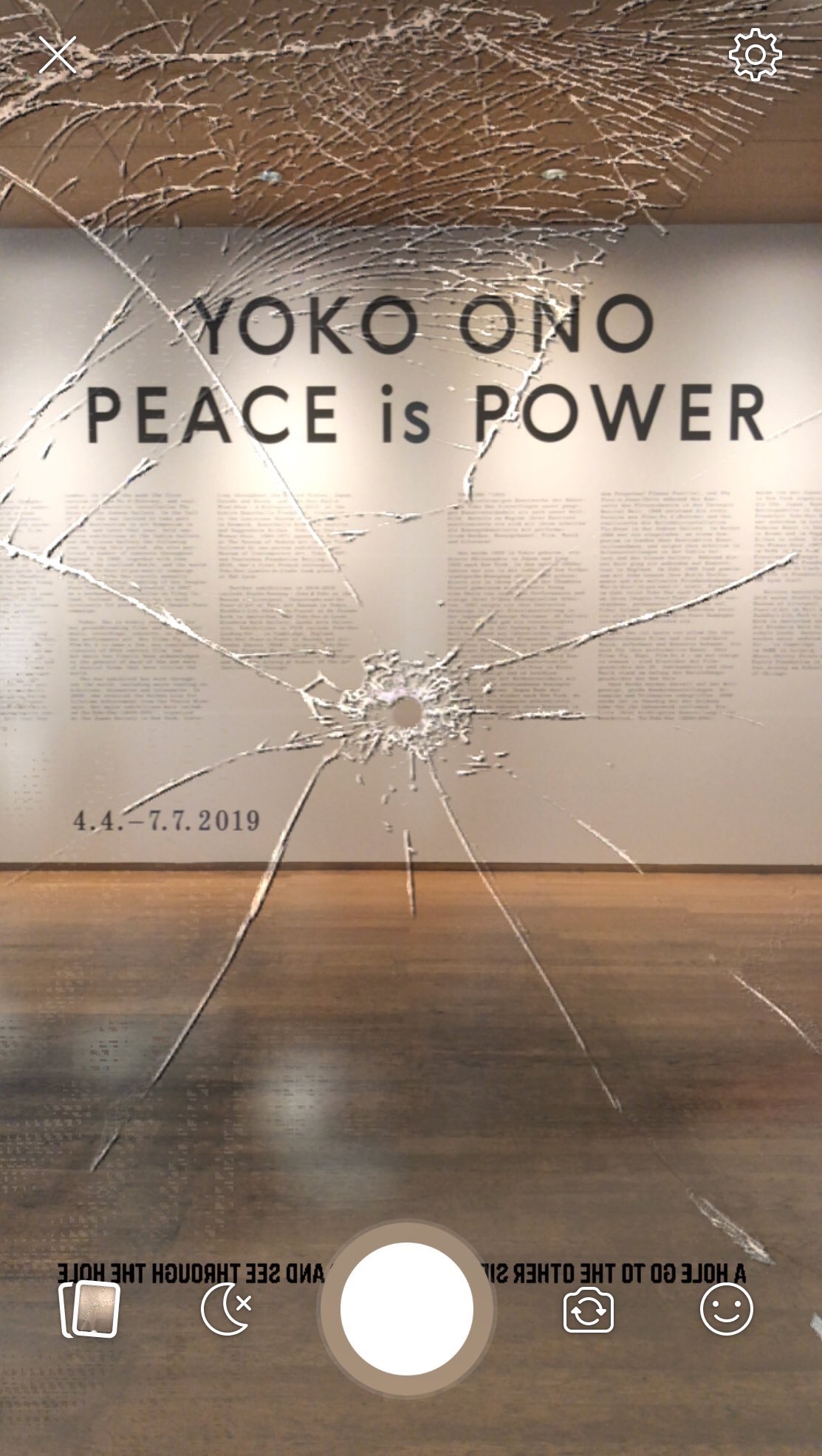