Are you ready for some Chinese Rock? 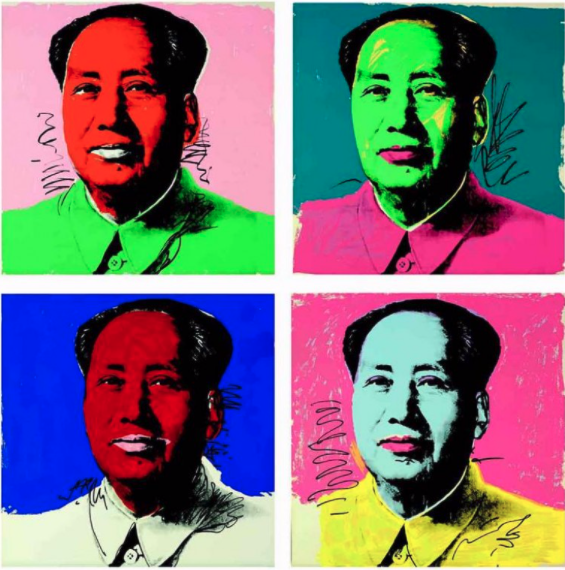 The first piano song that most of us are taught is a waltz for duet called ‘Chopsticks’. The melody is played in two-part harmony. The actual name of the song is ‘The Celebrated Chop Waltz’. It was composed in 1877 by a 16-year old female British composer under a male pseudonym.

Here is Ella Fitzgerald singing  ‘On A Slow Boat to China’ written by Frank Loesser. The song has become a standard recorded by countless artists.

Here is a live 1990 version by Stan Getz: https://www.youtube.com/watch?v=d4WSEmHujBo 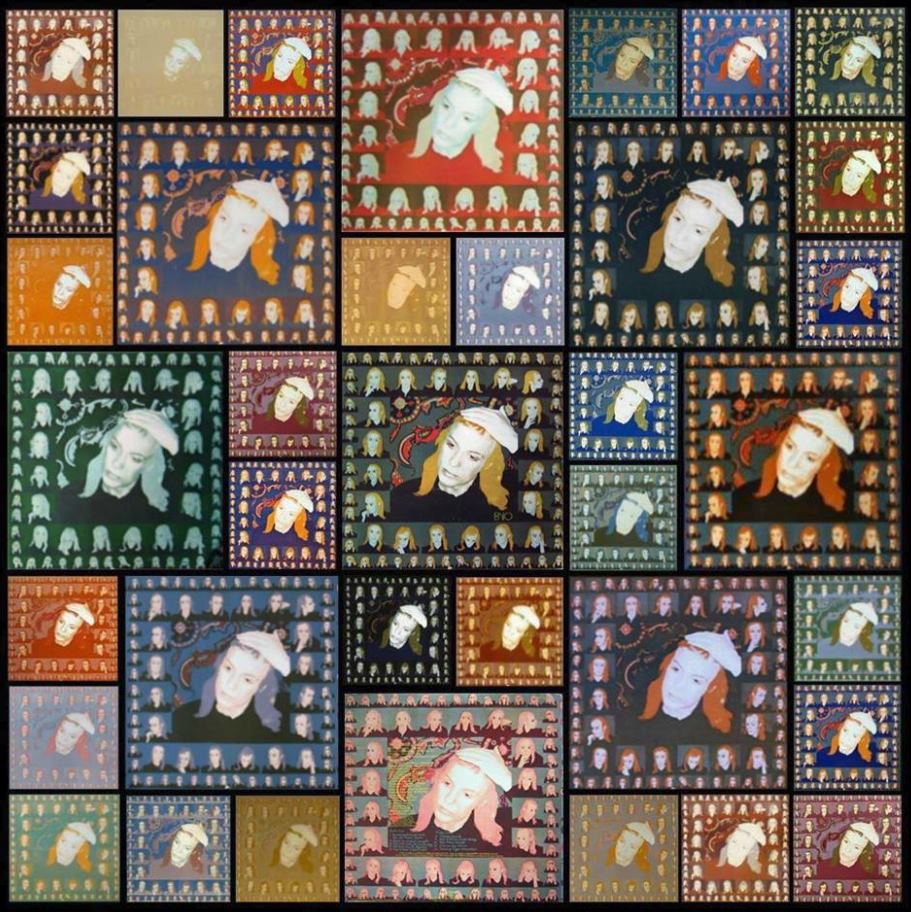 ‘Chinese Rocks’ was released by Johnny Thunders & The Heartbreakers as a single (the B-side was ‘Born To Lose’) and on their 1977 debut album L.A.M.F. (Like a Motherfucker). The title is a street term for super-potent Vietnamese heroin. On The Heartbreakers’ album, the song is credited to Thunders/Jerry Nolan/Richard Hell and Dee Dee Ramone. The song was actually written by Dee Dee and also appears on the Ramones’ 1980 album End of the Century as ‘Chinese Rock’. On the Heartbreakers’ version Johnny sings, “Hey, is Dee Dee home?” On the Ramones version, the lyrics sung by Joey are changed to, “Hey, Is Arty home?” (referring to pal Arturo Vega, designer of the Ramones logo). Johnny Thunders and Dee Dee Ramone were notorious drug buddies.

Blondie’s 1977 debut album includes ‘Kung Fu Girls’ – a Farfisa-fest whirled up by Jimmy Destri – about a prostitute who beats and robs her johns.

There is an array of unusual girls on this album which opens with the single ‘X-Offender’ about a prostitute who seduces her arresting officer (she will perpetrate love with him). ‘Rip Her to Shreds’ is a vicious female rant against her trashy rival – which Debbie sings in the biting style of the Shangri-Las’ Mary Weiss.‘ “Red eyeshadow, green mascara – Yech – she’s too much!” 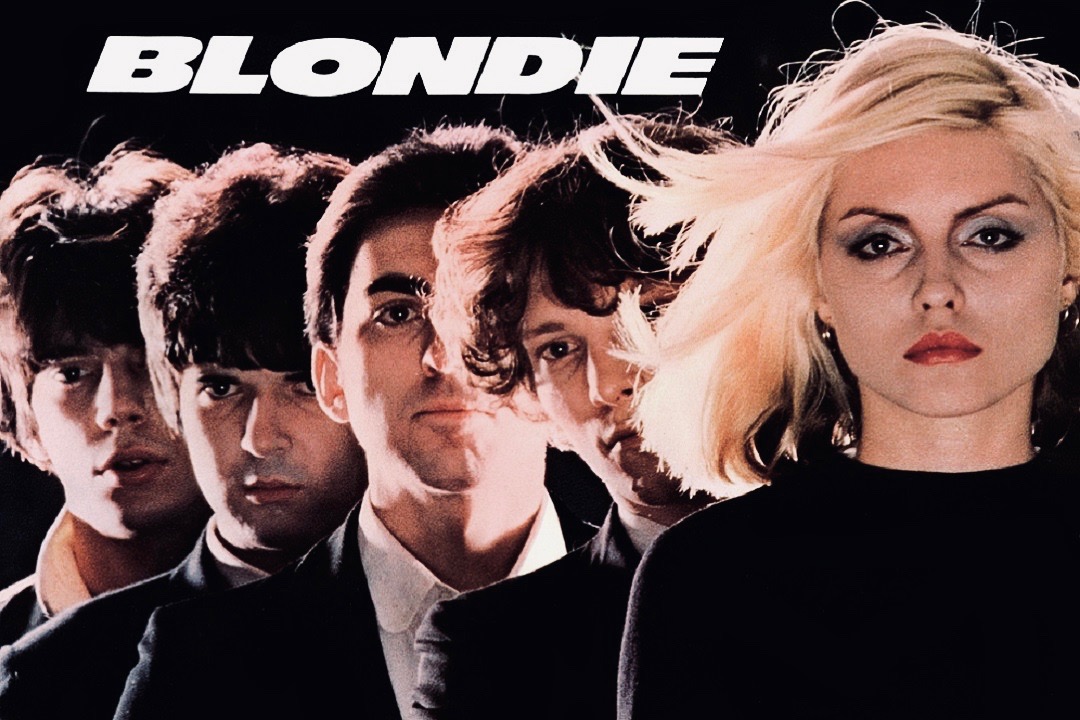 ‘China Girl’ first appeared on Iggy Pop’s album The Idiot in 1977. A toy piano adds sweetness to Iggy’s brooding version of the tune, written by Bowie with the original title ‘Borderline’.  The delicate China girl talks the aggressive American singer down from his escalating demented visions of world domination and destruction with a whispering, ‘Shhhhhhhh.’  Iggy is a mess without her. (Kuelan was actually Vietnamese).

“‘China Girl’ has a beautiful obligato melody at the end echoed by gypsy guitars. Bowie wrote that on guitar then he’d want somebody better to play his idea – his thought and somebody else’s fingers. That melody progression is lovely.”

See my story about Iggy’s album The Idiot 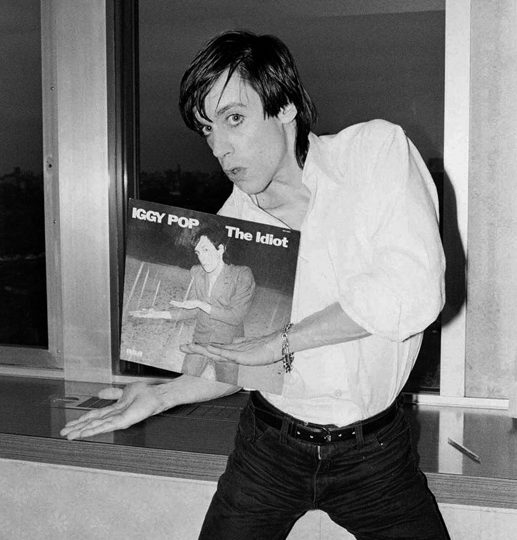 In 1983, David Bowie released ‘China Girl’ as a single, and on his album Let’s Dance – adding an Asian-inspired guitar line, transforming Iggy’s moody version into a bouncy pop song. The popular video with a nude beach scene, shot in New Zealand features Geeling Ching with whom Bowie had a short-term affair. 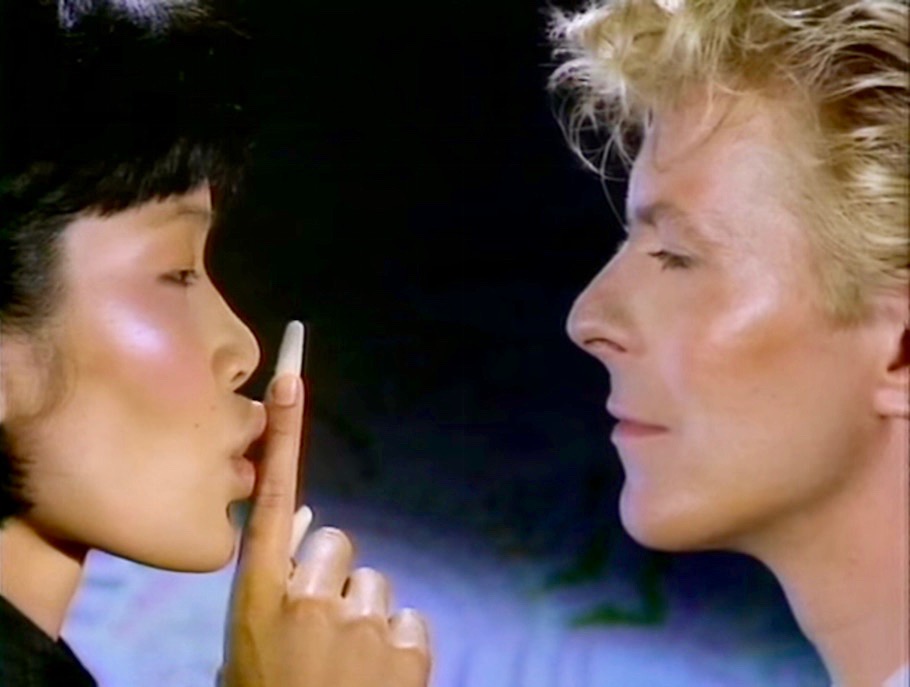 The beautiful and delicate sailing song ‘China’ sung by Mick Ronson appears on the 2-CD reissue of Ian Hunter’s 1981 album Short Back n’ Sides – on the bonus disc.  It was produced by Mick Ronson and Mick Jones (The Clash) as was Hunter’s entire album.

‘Slowcar to China’ is on Gary Numan’s 1981 album Dance. Ironically, the song is not very danceable at all with its’ slow robo-ambience. Of course he would take a slow CAR rather in a slow boat to China, in light of his biggest hit, ‘Cars’.

‘China’ by Red Rockers from New Orleans was a new wave hit in 1983 – from their album Good as Gold.

Composer Ryuichi Sakamoto collaborated with David Byrne to compose the spectacular score for Bertolucci’s film The Last Emperor. The soundtrack won an Academy Award in 1987. The entire work is gorgeous but my favorite piece is Sakamoto’s ‘Rain’.

The opera Nixon in China is based on President Nixon’s visit to China in 1972. The work premiered in 1987 to mixed reviews. It has since been recorded and also presented live in Europe and in America in 2011 at The Metropolitan Opera. The score is reminiscent of the style of Phillip Glass, and is also Wagnerian in parts.

Queen have a song called ‘Chinese Torture’ on their 1989 album The Miracle. It is a brief instrumental showcase of Brian May’s guitar work.

The band China Drum released a heavy punk cover version of the Kate Bush classic ‘Wuthering Heights’ in 1995. Fans of the original song might find this a bit brutal, but I love punk covers. I think that punk arrangements lend an uplifting joy to any song.  I love Joey Ramone’s version of  ‘What a Wonderful World’.  I especially like punk versions of TV show theme songs, like ‘Gigantor’ by The Dickies and the punk version of Popeye the Sailor Man’. Hey – I even liked Chipmunk Punk!

The lovely ‘China Bird’ is on Patti Smith’s 2000 album Gung Ho. It was co-written by Oliver Ray. The album title is a Chinese phrase meaning “work together” – a morale building slogan frequently quoted by U.S. Marines during World War II.

‘Boat to China’ – a nice instrumental by Tangerine Dream which appears on 2008 CD The Anthology Decades – The Space Years Volume One.  Also, Great Wall of China is their soundtrack album of 2000.

‘Hong Kong Garden’ by Siouxsie & The Banshees appears on their 1978 album The Scream. It has lovely oriental styled melodies and percussion. The lyrics succinctly summarize the essence of China in a simple punk rock song named for a Chinese restaurant.

Sparks’ song ‘Tsui Hark’ on their 1994 album Gratuitous Sax & Senseless Violins is narrated/sung by the Hong Kong film director/producer himself, introducing himself and listing his film credentials over a steady disco beat. 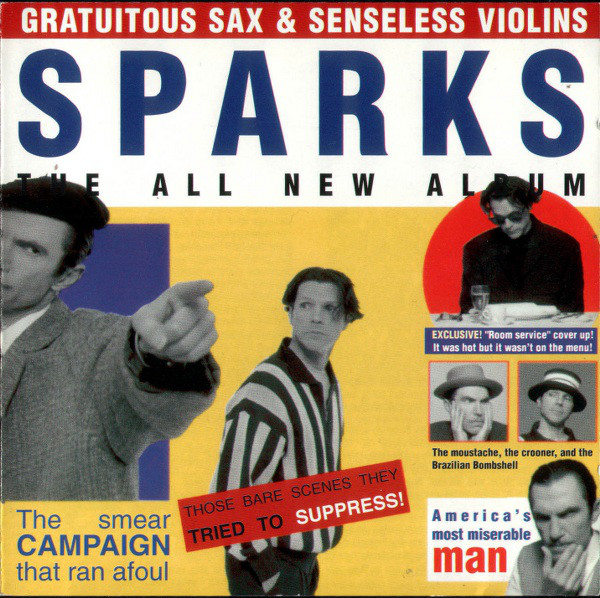 ‘I’ve Got That Tune’ is by the band Chinese Man released in 2006. They are actually a French trip-hop/reggae group comprised of three Caucasian guys. This is a version of the 1932 song ‘Hummin’ to Myself’ by Washboard Rhythm Kings (a group of varying jazz musicians). This very cool old-fashioned track is manipulated by Chinese Man with a cool beat and some scratching. This tune was used by Mercedes-Benz in an ad. The Chinese Man band mascot has worldwide disciples spreading the zen spirit with their music around the world. The song was also covered by Dan Hicks & the Hot Licks.

Boots of Chinese Plastic’ is a song by The Pretenders on their 2008 album Break Up the Concrete. The search for divinity, (which is all around us) is paralleled with materialism in this world. The title must be a riff on Dylan’s ‘Boots of Spanish Leather.’

“I try to put a core of real sensitivity and make the words childish to just say simply, ‘This person is going away, and I’m missing them very much. I’m not going to recover unless they come back soon, and I’m leaving this note in the back of a book because I know you’re going to read it when you are traveling.’” 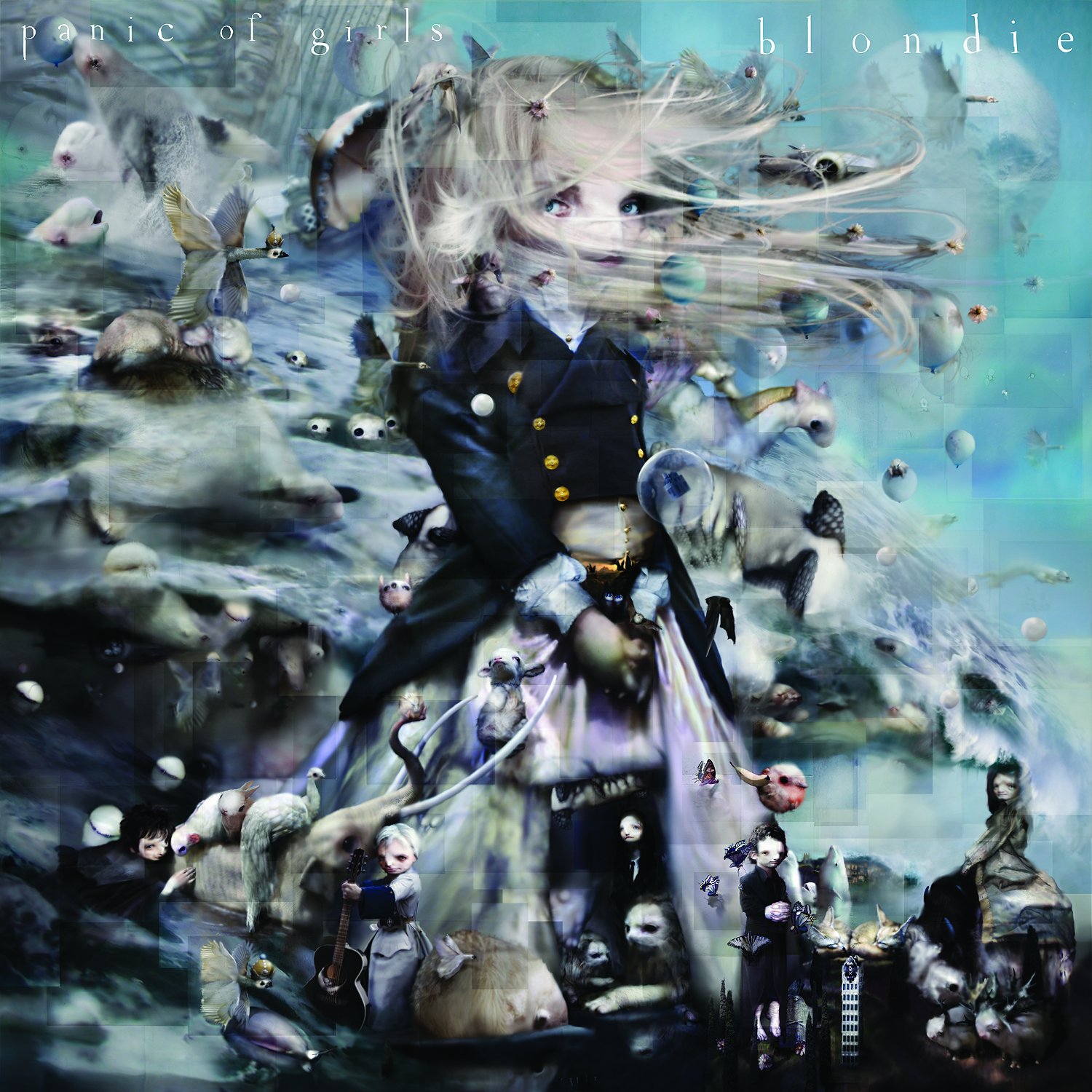 ‘Chinese Walk’ by Amanda Lear is a really cool electro-disco tune with a stunning video. Lyrics by Amanda illustrate China’s immense population growth and world influence. It was the first single from her 2011 album I Don’t Like Disco. Amanda previously had a hit with ‘Queen of Chinatown’ in 1970.

See my story about Amanda on the cover of Roxy Music’s album: 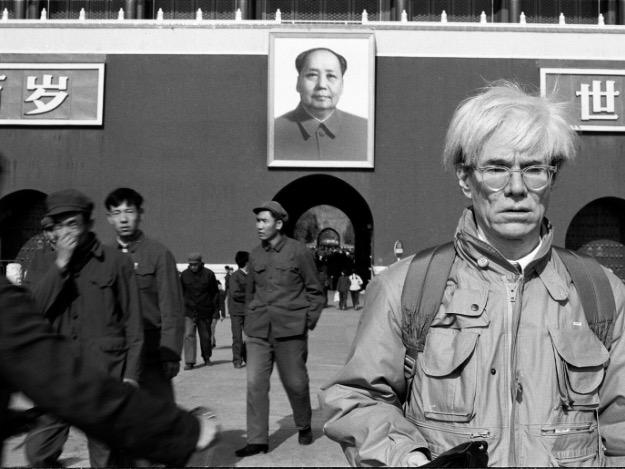 The Last Empress of China 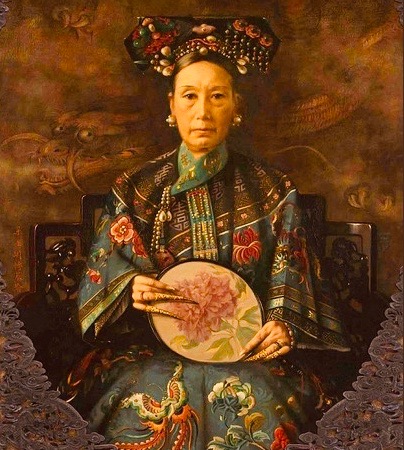 My story about the last emperor of China’s cousin Eastern Jewel (Yoshiko Kawashima). She is fascinating!

Kawashima became a well-known and popular figure in Manchukuo, making appearances on radio broadcasts and even issuing a record of her songs.

Excerpt from my story: Yoshiko appeared rebellious and regal at once, always dressed to kill – whether sporting a tiara or a cigar, but she was not just a fashion icon. She used her courageous image and her weapons fearlessly, living the life of a rebel to the fullest – in promiscuity, intrigue and scandal. Although Yoshiko frequently dressed as a man, her greatest weapons were those she possessed as a woman – charm and beauty…. Yoshiko had a special affinity for the daring glamour of men’s clothing. She loved stylish, immaculately fitting military uniforms and pilot gear, and wore them proudly. She had a flair for tilting her cap perfectly, or positioning her sword just right, as a stunning lethal accessory. She was decorated with various rank insignia, fur trimmed collars, shiny polished leather boots, jodphurs, riding caps, military caps, trench coats, capes and tuxedoes. Yoshiko posed for numerous photographs in these outfits, which she autographed like a pop star… At the end, frail and tired, facing a death sentence Yoshiko remained defiant although she was only a haunting ghostlike waif. In a film about her life, Yoshiko is brilliantly portrayed by the late Anita Mui (the Madonna of Asia). 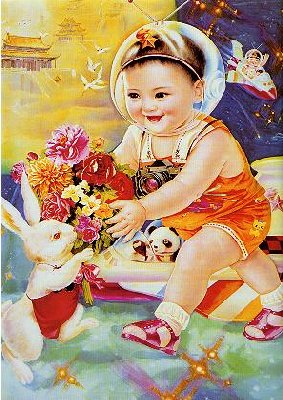 One thought on “CHINESE ROCK  ”