ALL ABOARD FOR FUNTIME!

I hear the train a comin’ – it’s comin’ round the bend! 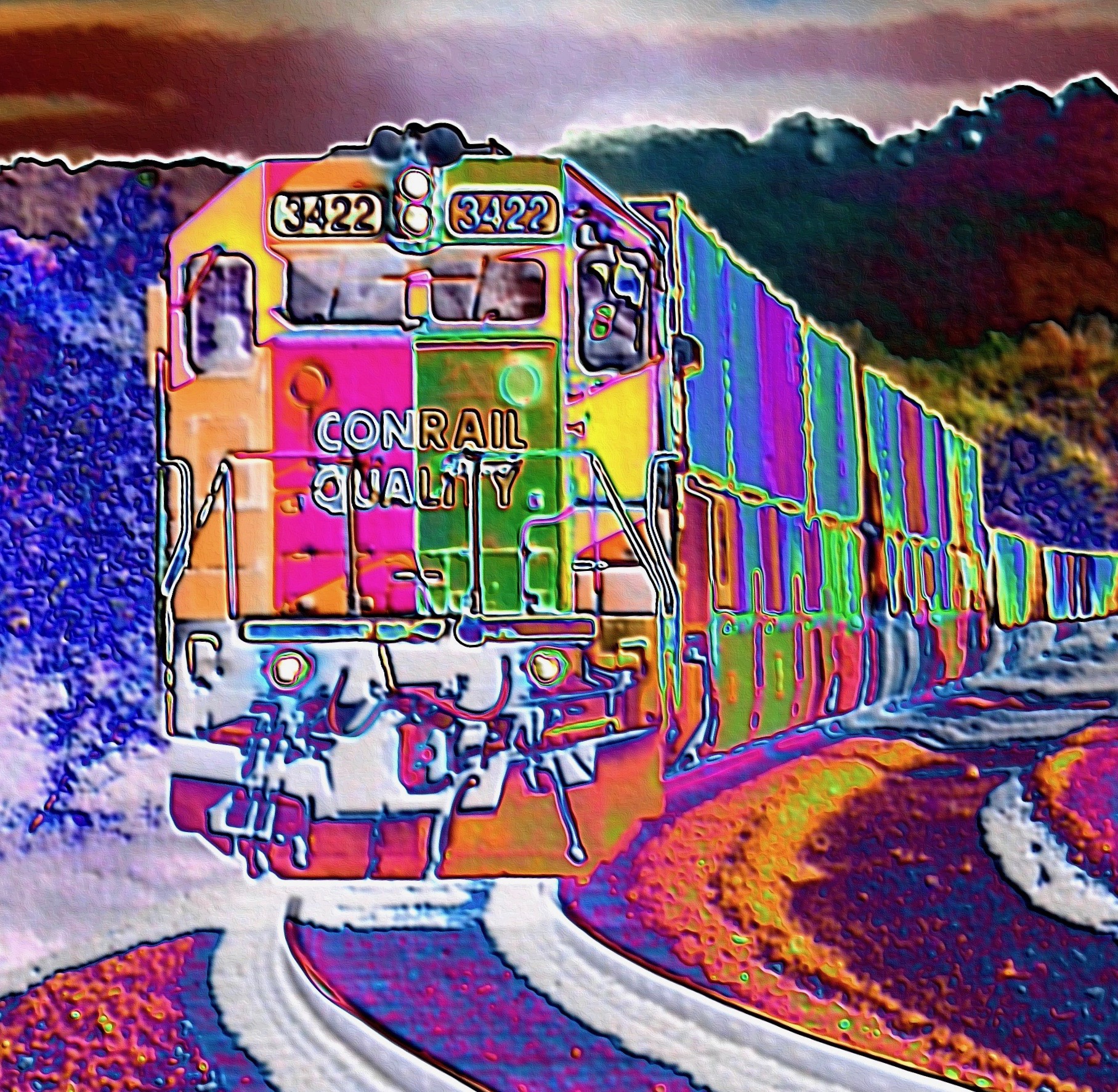 ‘I’ve Been Working on the Railroad’ is an old standard folk song dating back to 1927. The famous lyrics include,

“Someone’s in the kitchen with Dinah…” / and the chorus

“Dinah won’t you blow your horn?”

These same lyrics were also sung on The New York Dolls song ‘Subway Train’ on their 1973 debut album. 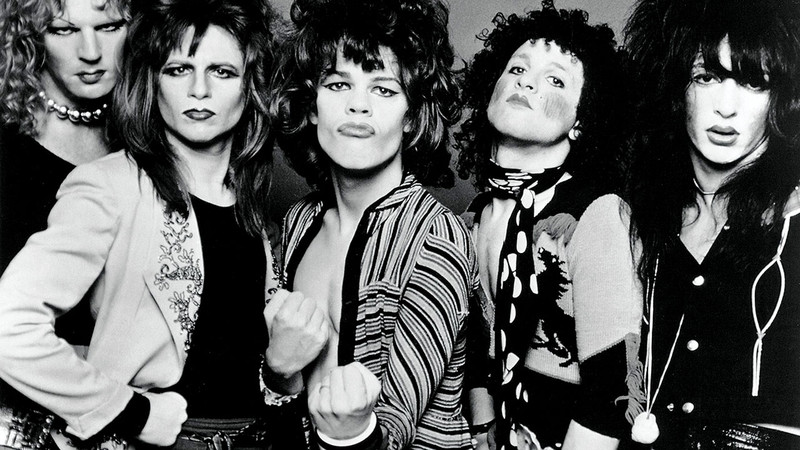 ‘Rock Island Line’ was a1930s chain gang song, revived decades later in 1956 by Lonnie Donegan and his skiffle group. It takes place on Chicago’s Rock Island and Pacific Railroad. Lead Belly heard the song when passing a prison chain gang in the 30s. He recorded the song in the 1940s. Lead Belly’s version was recreated Lonnie Donegan in England.  It went gold in the U.K. and sold well in the USA. It has been recorded many times before and since by the likes of Odetta, Bobby Darin and Johnny Cash, but Donegan’s fast version remains the best known and most influential. Most Americans know of Lonnie due to his 1959 novelty song “Does Your Chewing Gum Lose Its Flavour (On the Bedpost Overnight?)”

The swinging horn-based big band tune ‘Chatanooga Choo Choo’ was made in 1941. It was the very first (78 rpm) Gold Record, selling just over a million copies and staying at No. 1 for 9 weeks in the USA. It was made popular by Glenn Miller and His Orchestra. The train originates at NYC’s Penn Station and takes the singer to Tennessee where he will meet the woman he loves.

In ‘The Freedom Riders’ by Harold Jackson and The Jackson Brothers on Edsel Records, actual train sounds are emulated by the vocals and with horns. The song was produced by Kent Harris (Bo Diddley, The Coasters, etc.). The song was reissued on vinyl in 2016. The train is boarding on tracks 1961 and 1962 – the prime years of activism by the Freedom Riders of the Civil Rights movement against segregation. In summer 1961, 400 activists were arrested in Jackson Mississippi. The Freedom Riders influenced Robert Kennedy’s decision to enforce desegregation of buses and terminals.

Johnny Cash dreams of riding the train that he hears every day from his jail cell in ‘Folsom Prison Blues’. Cash recorded it at Sun Studio in Memphis for his debut album in 1955. A live version which he actually recorded at Folsom State Prison was a No. 1 hit in 1968.

The funk of James Brown’s ‘Night Train’ chugs along with punchy horns propelling the engine. It originated with Duke Ellington’s band, then credited to his band member Jimmy Forrest. On Brown’s 1962 single, he rattles off names of the American cities on his East Coast tour.

‘Last Train to Clarksville’ was written by Boyce and Hart. It was a hit for The Monkees on their 1966 album. It is very similar in style to The Beatles’ hit of that same year, ‘Paperback Writer’. This is not a big surprise, as The Monkees were a manufactured band, based upon the mop-tops’ image. The ‘Oh no no no’s’ in the song are a take-off on the Beatles’ ‘Yeah Yeah Yeah’s’ on ‘She Loves You’. In an odd occurrence in 1967, Jimi Hendrix opened for The Monkees on a short-lived tour. It did not go over well. The backing band on some of the Monkees’ hits were members of The Wrecking Crew who worked with Elvis and also appear on hundreds of legendary hits. Some of their hits were written by Neil Diamond including ‘I’m a Believer’ and ‘Love To Love’.

The Velvet Underground’s fourth and final studio album with Lou Reed Loaded (1970) includes ‘Train Round the Bend’. Reed’s close friend had recently attempted suicide by jumping in front of a train. His suicide failed, but he lost an arm. The ‘amputation’ was referenced in the song ‘Rock N’ Roll’. ‘Train Round the Bend’ is a wonky psychedelic track with squeaky strings and a warped feel. The singer longs to leave the country and get back to the city where he belongs. Lou left the band three months prior to the album’s release.

The epic album version of Yoko Ono’s ‘Mind Train’ (Fly 1971) is a nearly 17-minute jam, taking us off the rails to places we’ve never been before!  Yoko’s train journey pre-dates Kraftwerk’s clanging ‘Trans Europe Express’ by five years. The players include John Lennon on  guitar and Klaus Voormann on bass. A punk/funk chugging, plodding beat merges with free-form instrumentation and vocals. It was once described as Can doing ‘The Loco-Motion’. It bears similarity to their 18-minute long track ‘Halleluwah’ on Can’s album Tago Mago, also released in 1971.

The reggae rhythm picks up speed toward the end, becoming a total freak-out – especially enthralling when performed live! Yoko’s somewhat spoken lyrics alternate with her trademark wordless utterances. The lyrics are dark at times, repeating, “I thought of killing that man” as if the singer is taking a train ride to alleviate or misdirect anger. The train is also conceptual, as Yoko also repeats in a verbal beat, ‘Dub-dub train ploughs through my mind.’ Mind Train’ was released as a single on January 20, 1972. It was a four-minute edit of the 16-minute album track

Cat Stevens wrote ‘Peace Train’ in 1971 for his fifth album Teaser and the Firecat. In concert, he introduces the song with the story that he wrote it on a train, thinking about Alfred Hitchcock films that have taken place on trains. (My favorite is Strangers on a Train). The album title references characters in a children’s book written by Stevens – Teaser and his cat, who try returning the moon back up into the sky after it has fallen.

‘Love Train’ was a No. 1 single by The O’Jays from Ohio (written by Gamble & Huff). The groups name is in honor of Cleveland radio DJ Eddie O’Jay who was a member of their management team. Despite their Cleveland origins, the song was a staple of the Philly Soul sound. It appeared on the album Back Stabbers in 1972. The video was filmed on the Long Island Railroad. 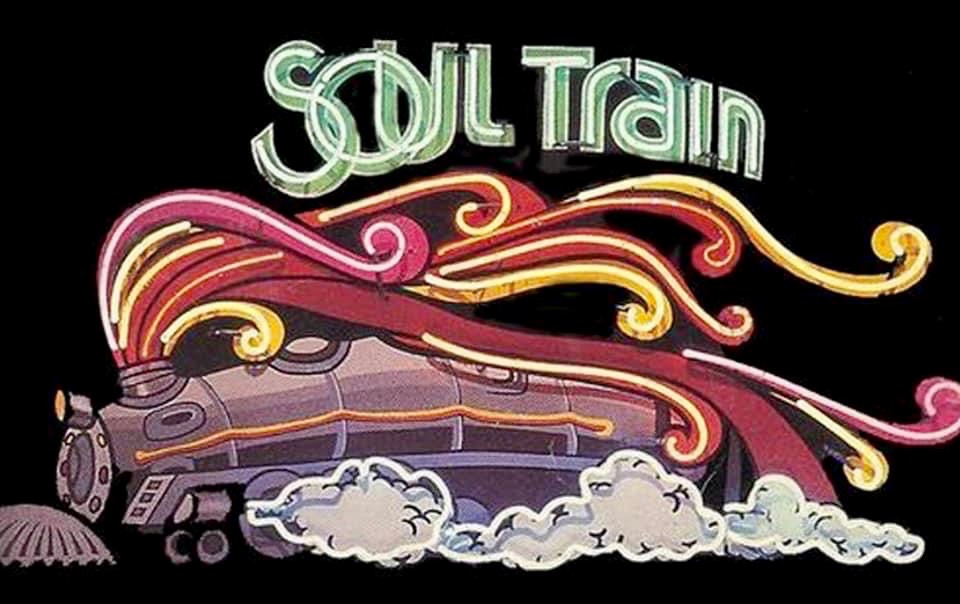 The Rolling Stones track ‘Silver Train’ appears on their 1973 album Goat’s Head Soup.  It was written by Mick and Keith for Johnny Winter who released it before the Stones’ version came out, on his album Still Alive and Well. I love the promo film with Mick Taylor’s slide guitar and Jagger wearing one of his fabulous Ossie Clark jumpsuits – in electric blue velvet – with matching eye shadow!

‘Midnight Train to Georgia’ was a hit in 1973 by Gladys Knight and the Pips from their album Imagination. Although her man’s dreams of Hollywood stardom have been dashed, the singer follows him home to a simpler place and time in Georgia.

Soul Train was a black version of the American Bandstand television dance show from 1971-2006. Its most iconic years were when Don Cornelius hosted form 1971-1993. The dancers would sometimes form a Soul Train dance line. David Bowie appeared on Soul Train lip-synching to his songs ‘Fame’ and ‘Golden Years’ from his then forthcoming album, Station to Station. ‘Golden Years’ was originally offered to Elvis Presley. On November 4, 1975, Bowie was the whitest man ever to appear on Soul Train. Only Elton John had beaten him to it.

See my story all about the Bowie/Lennon song ‘Fame’ 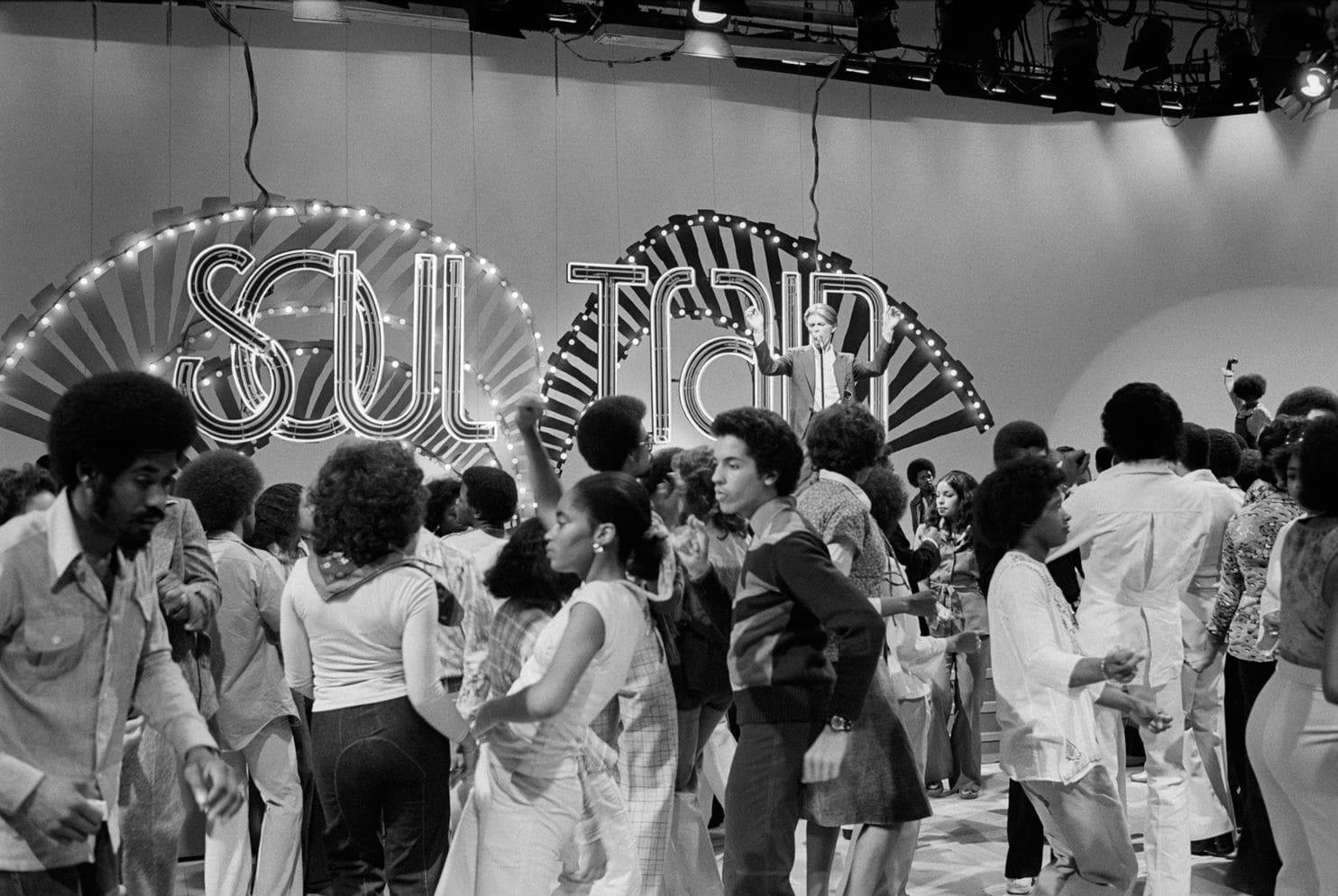 David Bowie’s song ‘ Station to Station’ on his 1976 album of the same name is a double entendre, not only about train stations but the stations of the cross – religious meanderings, scribbling the tree of life. Darkness in L.A. – Transition / Transmission.  Electronic soul. Bending sound.  The Thin White Duke sings of white lines.  It’s not the side effects of the cocaine / I’m thinking that it must be love. 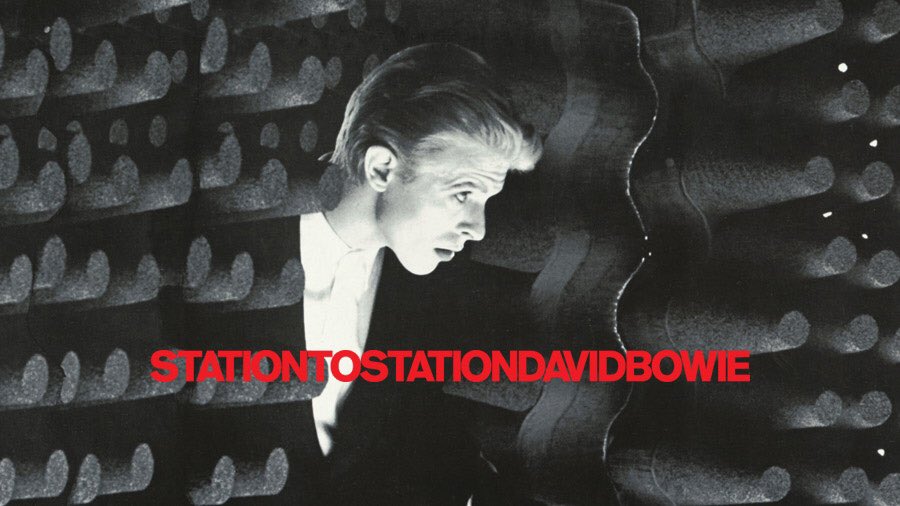 Bowie had visited the German band at their studio during his Station to Station tour. Kraftwerk name-checked Bowie and Iggy Pop in their song ‘Trans Europe Express’. Kraftwerk’s TEE album was played before Bowie’s Station To Station tour gigs as the audience filed in to the venues. (Iggy’s 1977 song ‘The Passenger’ is featured in my Road To Nowhere playlist).

Kraftwerk invented and designed their own synths and drum machines, but for the realistic sounding train song ‘Metal on Metal’ they simply used metal hammers to bang on pipes. 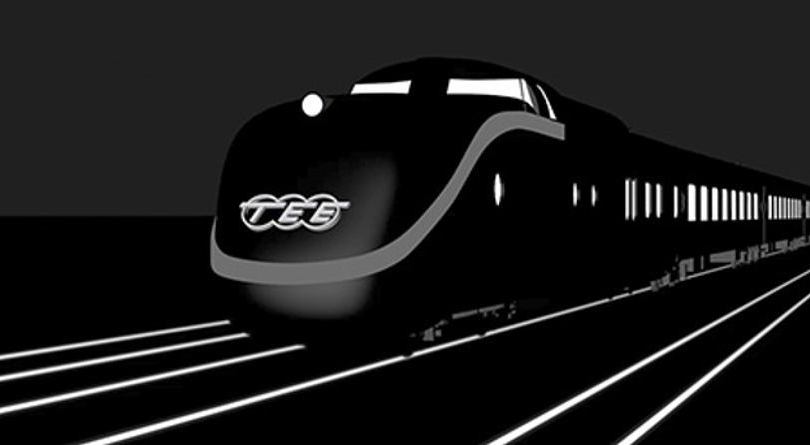 ‘Up the Junction’ by Squeeze is the tale of a broken family. The song was a single from the band’s second album, Cool For Cats.  The video was  filmed in the kitchen at Tittenhurst Park, John Lennon’s former estate in Ascot, England which had a home studio where his Imagine film was made.

My story about Tittenhurst Park:

Ozzy Osbourne is off the rails on the ‘Crazy Train’ from his album Blizzard of Ozz in 1980. The comments beneath the video say it all:

“If they don’t play this at my funeral, I’m not going.”

“No don’t play this at my funeral I would have to un-die just to jam out to this song.”

‘Train In Vain’ was a last-minute add-on track to the album London Calling by The Clash. Therefore, it is not listed, and remained a secret track. When it was later listed, the song was titled Train in Vain (Stand by Me)’. The lyrics by Mick Jones are about his crumbled relationship with Viv Albertine of The Slits.

The Cramps welcome us ‘All aboard the Drug Train’ and it sounds like lots of fun! This was the B-side of the ‘Garbage Man’ single in 1980.

My tribute to Lux Interior

The Psychedelic Furs ‘Into You Like a Train’ is a killer track from their second album (1981) which chugs along as the guitar interplay weaves us in for the ride. This is a bit more over ground than their really cool debut album. 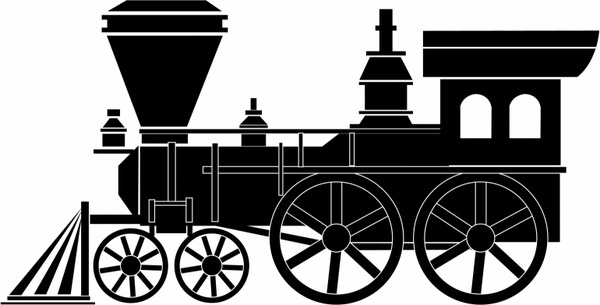 The funky ‘Freedom Train’ by Lenny Kravitz appears on his 1989 debut album, Let Love Rule. This was a killer debut and this track rocks!

‘Passengers’ by Dutch composer/musician Stephen Emmer is a stunningly beautiful portrait of train travel produced by Tony Visconti with a spoken vocal by Lou Reed.

‘Carol of the Bells’ https://www.youtube.com/watch?v=sCabI3MdV9g

Yoko Ono was back on track again in 2009 with ‘Waiting for the D Train’ on her album Between My Head and the Sky. The mind-blowing track has a heavy and wild plodding groove similar to that of ‘Don’t Worry Kyoko…’ with the bass line of Yoko’s amazing track ‘Why’ (1970).  D = Death, and Yoko – age 76 at the time – knew that we are all waiting for that train. It’s the one that arrives after ‘Mind Train’. So why not sing about it? Here she is rocking it live with Iggy Pop! 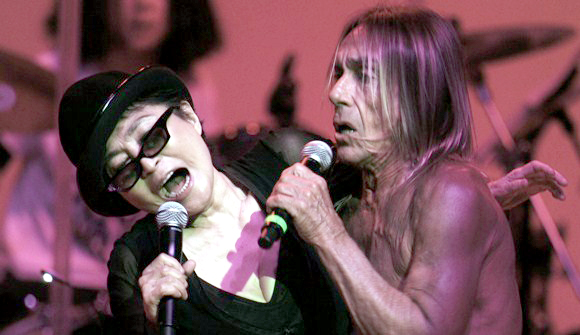 AND:
About A Song

2 thoughts on “All Aboard!”